A case of acute massive pulmonary embolism event happened during fracture fixation in our department recently. Shortly after surgery has begun, vital signs of the patient fluctuated emergently, his consciousness was lost, blood pressure and heart rate was once lost in monitor. We immediately started cardiopulmonary resuscitation plans, including setting up advanced life support, chest compressions and cryogenic brain protection strategy, opening center vein to establish a blood pressure, and monitoring central venous pressure and arterial blood pressure. When trying to maintain the vital signs stable, we improved the relevant inspection at the same time. Through a multidisciplinary collaborative diagnosis, acute massive pulmonary embolism was diagnosed. Heparin was given for anticoagulation, and recombinant tissue plasminogen activator was used for thrombolysis treatment. After vital signs were stable, the patient was transferred to the intensive care unit. Then, the disease progressed into multiple organs failure. After treatment for nearly a month, the patient was discharged, without any sequela or complications.

Pulmonary Thromboembolism is a common complication of Deep Venous Thrombosis (DVT), they are collectively known as Venous Thromboembolism (VTE). In recent years, though the awareness of Pulmonary Embolism (PE) increases, still there is an existence of misdiagnosis, missed diagnosis or not timely diagnosis, as well as non-standard thrombolysis and anticoagulation treatment in clinical practice.

Acute PE is the most severe clinical manifestation of VTE. Most existing epidemiology researches study risk factors and the natural course of VTE as a whole. The incidence of it was 100-200/100,000 [1,2].

There can be no symptoms in PE. Sometimes it was diagnosed accidently. Initial manifestation in some PE patients is sudden death. So it is difficult to obtain accurate PE epidemiological data. According to estimates from epidemiological model, in the six countries of the European Union with a population of 454.4 million in 2004, PE caused death to more than 317,000 cases. Among them, the sudden fatal PE accounted for 34%, of whom 59% failed to diagnose before death, only 7% of early death cases were diagnosed before death. The risk of PE is associated with increasing age. In people aged more than 40, for every 10 y increase, incidence of PE increases about 1 time. In items for prevention and control of pulmonary embolism in China from 1997-2008, PE patients from more than 60 tertiary hospitals registered. There were a total of 18,206 cases in 16,792,182 cases of hospitalized patients diagnosed with PE. The incidence was 0.1% [3].

Susceptible factors of VTE include the patient’s own factors (mostly permanent factors) and environmental factors (mostly temporary factors). Six weeks to three months of temporary and reversible risk factors (such as surgery, trauma, braking, pregnancy, oral contraceptive or hormone replacement therapy, etc.) may induce VTE, but in the cases of lack of any known risk factors, PE can also occur.

Major trauma, surgery, lower limb fracture, joint replacement and spinal cord injury are the strong inducing factors of VTE; tumor, pregnancy, oral contraceptives, hormone replacement therapy, and center venepuncture are also recognized susceptible factors of VTE. With the deepening of research, new susceptible factors have been found: VTE, as a part of the cardiovascular disease, shares common risk factors (such as smoking, obesity, hyperlipidaemia, hypertension and diabetes) with artery diseases, especially atherosclerosis. Incidence of VTE is much higher in patients with a disease history of myocardial infarction within 3 months, or hospitalized because of heart failure, atrial fibrillation, or atrial flutter. In vitro fertilization further increases the risk of VTE related to pregnancy, especially in the early 3 months. Infection is one of the main inducing factors of in-hospital VTE, and blood transfusion and erythropoiesis factors can also increase the risk of VTE. Common susceptible factors are shown in Table 1 [4].

This pulmonary thromboembolism patient was with multiple risk factors (such as lower limbs surgery, a knee operation, obesity, sedentary, age increase, etc.), and the onset was severe, with the first symptom of shock, so that it was unable to accurately diagnose the cause at the first time. Corresponding symptomatic treatment and life support were the only treatment. Then, with the improvement of relevant inspection and multidisciplinary assist diagnosis, etiology was clear, precise anticoagulation thrombolysis treatment was implemented; the patient was gradually smooth and steady. Since the patient experienced sharp fluctuations in circulation and pulmonary embolism, after transferred to the ICU for further treatment, multiple organs had varying degrees of damage; especially kidney function suffered the worst damage. After treatment and haemodialysis for a month, the patient was discharged, without any complications. We now report the pulmonary embolism case as follows.

A 40 y old male patient, injured by car accident, was caused impact trauma of lower limb leading to closed injury of right knee joint, who was then hospitalized with right knee pain and motion limitation. The MRI revealed the right lateral tibial plateau fracture; possibility of right knee lateral collateral ligament injury; right knee effusion. There was nothing unusual in personal history, obstetrical history and family history of this patient. The preoperative examination had nothing special.

The patient was treated with celecoxib to kill pain, lower limb plaster immobilization, without low molecular weight heparin. The patient was distributed to operating room 6 d after trauma, and spinal anesthesia was delivered. In the middle of surgery, the patient experienced sudden chest tightness, sharp chest pain and irritability. The blood oxygen saturation (SPO2) and heart rate dropped, non-invasive blood pressure (NIBP) was 65/40 mmHg. Ephedrine 15 mg, atropine 0.5 mg and methylprednisolone 160 mg were injected immediately, the patient breathed on his own with tidal volume 400-500 ml, and the lungs bilateral breath sounds were clear and symmetrical. Since the SPO2 continued to decline, endotracheal intubation was applied to this patient, but the SPO2 was still only 70-80%. The ETCO2 maintained at 0-5 mmHg, with the position of endotracheal tube has been confirmed. At this moment, the SPO2 decreased to 60-70%, NIBP was unavailable and heart rate decreased to 20-30 bpm with ECG in third degree atrioventricular block. Epinephrine 1 mg, heparin sodium 100 mg were injected intravenously, and defibrillation was applied to the patient. Then, the heart rate had returned to normal rhythm and increased to 160 bpm with SPO2 and NIBP still unavailable. After a few min, the heart rate gradually decreased. The ECG was in profound bradycardia, 20-30 bpm and ventricular escape beats were seen. Atropine 1 mg was injected but had no effect; subsequent epinephrine 2 mg was given to him with chest compression applied. After about 30 times chest compressions, the ETCO2 suddenly increased from 0-5 mmHg to 30 mmHg and the SPO2 gradually recovered to 100%. The 12-lead ECG was in sinus rhythm with SIQIIITIII present, and a complete right branch block was diagnosed. Bedside chest radiograph showed nothing different from the preoperative one. Blood gas analysis revealed profound respiratory acidosis and metabolic acidosis (Table 2). The D-dimer value was extremely high (Table 3).

Table 2: Dynamics parameters of blood gas analysis during the surgery.

Table 3: Dynamics parameters of coagulation function during the surgery.

The patient was diagnosed as massive pulmonary embolism, given recombinant Tissue Plasminogen Activator (rTPA) 100 mg intravenously for thrombolysis, and NaHCO3 150 ml was infused twice for correcting acidosis. When the plasma pH ascended to 7.014, the infusing of NaHCO3 had been terminated, in order to avoid intracellular acidosis. Due to hemodynamic instability, epinephrine was given several times repeatedly. The patient was unconscious with dilatation of pupils and disappearance of pupillary reflex. Ice cap was given for cooling, and mannitol for dehydration treatment. The SPO2 recovered to 100% after chest compressions, then gradually decreased, finally stabilized at about 88%, and the Arterial Blood Pressure (ABP) stabilized at about 100/65 mmHg with dopamine continuous infusion. When the ABP was stabilized, furosemide 40 mg was administrated immediately, but it was not until rTPA infused over, the urine came out. The patient was transferred to ICU for further treatment. He developed acute multiple organ failure after admission to the ICU (Figures 1A-1E). The echocardiography showed dilated right atrium and right ventricle, tricuspid valve with moderate regurgitation, suggesting pulmonary hypertension, diastolic retrogression of left ventricular. After 2 months treatment, the patient was discharged with no sequela left. The surgery was successful without any sequela. 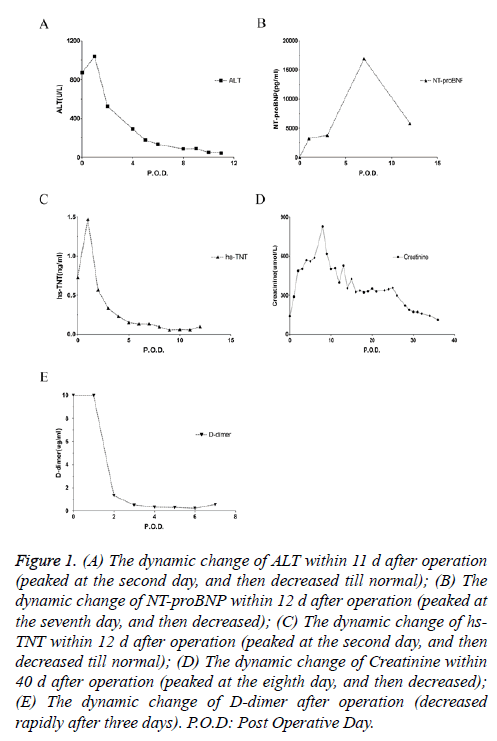 Venous Thromboembolism (VTE) is responsible for the hospitalization of 250,000 Americans annually and represents a significant risk for morbidity and mortality [5].

Guidelines identify missive PE as acute PE with sustained hypotension (systolic blood pressure<90 mm Hg for at least 15 min or requiring inotropic support, not due to a cause other than PE, such as arrhythmia, hypovolaemia, sepsis, or Left Ventricular (LV) dysfunction), pulselessness, or persistent profound bradycardia (heart rate<40 bpm with signs or symptoms of shock). Anticoagulation and fibrinolysis were recommended for patients with missive PE and acceptable risk of bleeding complications [13]. But the usage of endotracheal intubation and chest compression in the treatment of missive PE was rarely mentioned.

Our experience with the presented case suggested endotracheal intubation and chest compression played important roles in the rescue of patient with massive PE diagnosed.

The monitor of ETCO2 could not only confirm the position of endotracheal tube but also estimate the treatment effect of missive PE. In this patient, the ETCO2 jumped from 0-5 mmHg to 30 mmHg strongly suggested that the effective alveolare ventilation had been extremely improved. Moreover, monitor of ETCO2 could evaluate the quality of possible cardiopulmonary resuscitation, which might help the physicians to determine whether more efficient cardiopulmonary resuscitation was needed or the spontaneous circulation had returned [14].

The implementation of chest compression might cause the life-threatening blood clots to change position or fragment into small pieces, which resulting the pulmonary hemodynamic improvement might play a crucial role in this case of missive PE. Chest compression is easy to implement and effects fast, which is matching the character of emergency rescue for missive PE.

However, we did not deny the importance of anticoagulation and fibrinolysis. Actually, therapeutic anticoagulation was given to the patient during the diagnostic workup to avoid the blood clots growing up. Fibrinolysis was given to him even though the surgery was in progress, because of the hemodynamic instability. Moreover, the implementation of chest compression might cause the life-threatening blood clots to fragment into small pieces, but according to the continuous results of arterial blood gas analysis, the SPO2 recovered to 100% after chest compressions, then gradually decreased, suggesting the smaller blood clots might entry and block pulmonary small arteries. So without fibrinolysis, the blood clots could not be eliminated completely and the SPO2 could not stabilize at approximately 88%.

Compared to other biochemical parameters, the renal function was damaged so badly and persistently due to the hypoxia, hypotension, acidosis and the usage of large dose epinephrine that the artificial kidney dialysis had to be applied. It suggested that the protection of renal function was very important in the treatment of missive PE. The usage of haemodialysis in the early stage might be more helpful.

In conclusion, our experience with the presented case suggests that endotracheal intubation with monitor of ETCO2 and chest compression should be implemented as soon as possible when the life-threatening missive PE diagnosed. More efforts should be spent on the protection of renal function in the treatment of missive PE. However, more prospective studies are needed.

This work was supported in part by Youth Project of Shanghai Health and Family Plan Committee (20144Y0150).