Markers and metabolites related to inflammation in bronchiectasis with airflow limitation vs. chronic obstructive pulmonary disease

Chronic airway inflammation is the pathophysiologic hallmark of both chronic obstructive pulmonary disease (COPD) and bronchiectasis. COPD is associated with airflow limitation, which often results from an abnormal inflammatory response to noxious stimuli, such as smoking [1]. Bronchiectasis, which also results in chronic inflammation and airflow limitation, often develops secondary to repeated infections [2,3]. Activated inflammatory cells and pro-inflammatory cytokines, such as C-reactive protein (CRP) and interleukin (IL)-6, lead to systemic inflammation, which is associated with mortality and COPD comorbidities [4-7]. Moreover, club cell secretory protein-16 (CC-16) serves as an important protective and antiinflammatory mediator in the lung, and patients deficient in CC-16 have been known to develop COPD [8,9]. However, little is known about inflammatory markers and systemic inflammation in bronchiectasis, and no previous studies have compared the markers related to inflammation in patients with COPD and those with bronchiectasis. Although these diseases share clinical features, including inflamed and easily collapsible airways, leading to frequent hospitalization, these diseases have different pathophysiology. Defining the inflammatory markers in COPD and in bronchiectasis patients may provide an opportunity to understand the different pathologic mechanisms of systemic inflammation. Highresolution metabolomics is a promising tool that can provide insight by answering a biological question and that can document the affected end-products of cellular processes that vary according to the pathological state [10,11]. Adding the power of metabolomics to research provides an unparalleled opportunity to decipher the molecular mechanisms and potential signaling pathways that involve the inflammatory factors of disease. This study aimed to investigate the differences in the markers and metabolites related to inflammation in patients with COPD and those having bronchiectasis with airflow limitation.

Patients with bronchiectasis with airflow limitation as well as patients with COPD were enrolled in this study. These conditions were diagnosed and patients were followed-up at Korea University Guro Hospital between 2015 and 2016. Our institutional review board (#KUGH 13246) approved the study protocol. The patients provided written informed consent, and the study conformed to the tenets of the Declaration of Helsinki. The diagnosis of bronchiectasis with airflow limitation was made according to the following criteria: 1) bronchiectasis affecting two or more lung lobes identified on computed tomography; 2) mucopurulent or purulent sputum in the stable disease state; 3) post-bronchodilator spirometryconfirmed airflow limitation, with forced expiratory volume in 1 second (FEV1)/forced vital capacity (FVC) <70%, without a history of other airway diseases; 4) no evidence of active tuberculosis or pneumonia; and 5) age over 19 years. COPD was diagnosed on the basis of the American Thoracic Society and Global Initiative for Chronic Obstructive Lung Disease guidelines, i.e., airflow limitation confirmed by postbronchodilator spirometry, with FEV1/FVC <70%, and a history of smoking or biomass exposure. All other causes of respiratory disease that could cause airflow limitation, such as asthma, bronchiectasis, lung cancer, or interstitial lung diseases, were excluded from this study. Patients with COPDbronchiectasis overlap syndrome were also excluded. Patients in the COPD and bronchiectasis groups were matched for age and predicted FEV1% to adjust for disease severity.

We evaluated the following clinical parameters: smoking history (packs per year and smoking status), medical history, pulmonary function test results (spirometry results, lung volume, diffusing capacity of the lung for carbon monoxide [DLCO]), plain chest radiograph, chest computed tomographic image, FEV1 decline rates, number of exacerbations per year, modified Medical Research Council scale scores, St. George Respiratory Questionnaire results, and COPD assessment test scores. FEV1 decline rate was calculated at stable status based on the change in FEV1 from baseline to 1 year after enrollment. Exacerbation was defined as sustained worsening of the patient’s condition from the stable state that was beyond normal day-to-day variations, was acute in onset, and necessitated a change in the regular medication and an unscheduled hospital visit due to worsening of respiratory symptoms.

Blood tests, including CRP level and ESR measurements, were performed routinely on the day of enrollment, in an overnightfasted and medication-free state. Peripheral whole-venous blood was collected in EDTA tubes and serum was prepared by centrifugation for 10-15 min at 4,500 rpm and stored at -80°C until analysis. IL-6 and CC-16 concentrations were measured using ELISA kits (IL-6: R&D Systems, Oxford, UK; CC-16: BioVendor GmbH, Heidelberg, Germany).

Baseline characteristics of patients with bronchiectasis and COPD

Table 1: Comparison of characteristics between patients with chronic obstructive pulmonary disease and bronchiectasis.

Patient-reported scores of symptoms and quality of life were similar in both groups. There were no significant differences between groups in the FEV1 decline rates or in the number of exacerbations per year. 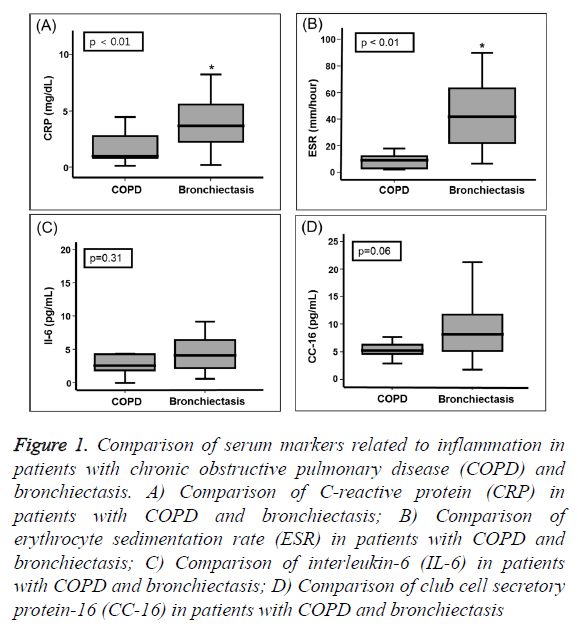 The raw LC-MS data were converted into the mzData format using Agilent MassHunter Qualitative Analysis software (version B.05.00; Agilent Technologies) and subsequently processed with apLCMS software using the Limma R package for quantification of ion intensities. apLCMS provided 7,481 m/z within a range of ions set from 50 to 1000 with 20,000 resolutions. The apLCMS features produced triplicate data, which were averaged, log2 transformed, and normalized using z-transformation. To reduce the incidence of false-positives, the FDR was calculated and a Manhattan plot constructed to identify metabolites with levels that were significantly different between COPD and bronchiectasis patients. PLS-DA was then performed on the raw apLCMS data to detect a significant separation shift between comparison groups, after which hierarchical cluster analysis (HCA) was used to separate the metabolic profiles of the comparison groups by inserting raw data into MetaboAnalyst 3.0. Among 7,481 tested serum metabolites, 640 were significantly different between the COPD and bronchiectasis patient groups (q=0.05) (Figure 2A). 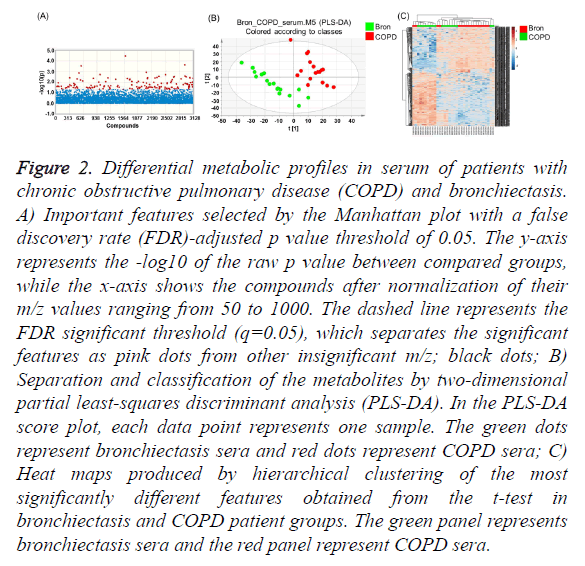 Figure 2: Differential metabolic profiles in serum of patients with chronic obstructive pulmonary disease (COPD) and bronchiectasis. A) Important features selected by the Manhattan plot with a false discovery rate (FDR)-adjusted p value threshold of 0.05. The y-axis represents the -log10 of the raw p value between compared groups, while the x-axis shows the compounds after normalization of their m/z values ranging from 50 to 1000. The dashed line represents the FDR significant threshold (q=0.05), which separates the significant features as pink dots from other insignificant m/z; black dots; B) Separation and classification of the metabolites by two-dimensional partial least-squares discriminant analysis (PLS-DA). In the PLS-DA score plot, each data point represents one sample. The green dots represent bronchiectasis sera and red dots represent COPD sera; C) Heat maps produced by hierarchical clustering of the most significantly different features obtained from the t-test in bronchiectasis and COPD patient groups. The green panel represents bronchiectasis sera and the red panel represent COPD sera.

Metabolic signatures of COPD and bronchiectasis

The significant features obtained from the Manhattan plot (FDR adjusted P <0.05) were further annotated by their m/z values using xMSannotator in order to identify the metabolites responsible for the metabolic distinctions between the groups. The following positive adducts were used [M+H]+, [M+Na]+, [M+NH4]+, [M+H-H2O]+, and [M+K]+. Based on a q value <0.05 and a VIP score >2.0, compounds related to upregulation of IL-6 and CC-16 were identified in bronchiectasis and their intensity bar graphs plotted. As shown in Figures 3A and 3B, biliverdin IX alpha (m/z: 565.24 [M+H-H2O]+) and Lcarnitine (m/z: 184.09 [M+Na]+) were found to be significantly upregulated in bronchiectasis patients' sera. Importantly, COPD patients’ sera correlated with the baseline characteristics (Table 1), but the level of nicotine (m/z: 163.12 [M+H]+) was significantly elevated in COPD patients as compared to bronchiectasis patients’ sera (Figure 3C). In addition, as shown in Figure 3D, N-acetyl serotonin (m/z: 201.102 [M+H-H2O]+) was elevated in the sera of COPD patients, but not bronchiectasis patients. 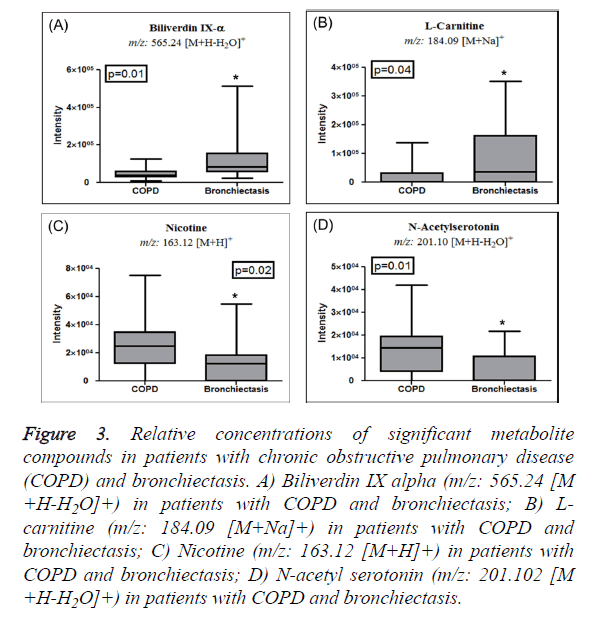 Despite higher levels of inflammatory biomarkers (ESR and CRP), CC-16, an inflammation-responsive marker also tended to be higher in bronchiectasis patients than in COPD patients. Club cell secretory proteins are involved in airway repair after injury and detoxification of harmful substances by secreting anti-inflammatory proteins [15,16]. The serum level of CC-16 is reported to be lower in smokers and subjects with asthma and COPD [17-19]. However, the role of CC-16 in bronchiectasis has not been elucidated. As a consequence of the destruction of club cells, the serum concentration of CC-16 is decreased in subjects with chronic lung damage caused by tobacco smoke and other air pollutants [8,16,20]. In contrast, serum CC-16 levels are increase in patients with acute and chronic lung disorders characterized by an increased airway permeability [20,21]. In patients with bronchiectasis, persistent active airway inflammation caused by recurrent infections leads to angiogenesis and increased vascularity of the airways [22,23]. It is likely that serum CC-16 is increased in patients with bronchiectasis to compensate for inflammatory damage.

One of the important metabolomics-related findings in this study was that Biliverdin IX alpha level was significantly increased in patients with bronchiectasis. Biliverdin is a potent anti-inflammatory molecule. Biliverdin reductase A on the plasma membrane of macrophages rapidly converts biliverdin to bilirubin in response to inflammatory conditions. Previously, biliverdin has been shown to suppress lung permeability and lung alveolitis by suppressing serum levels of lipopolysaccharide-induced pro-inflammatory tumor necrosis factor (TNF)-α and IL-6 [24,25]. Contrary to these studies, our data showed a trend for an increase in IL-6 levels as well as biliverdin production in bronchiectasis patients. These discrepancies may be because biliverdin is elevated as a feedback response to compensate for inflammatory damage caused by IL-6. Similarly, L-carnitine, which has previously been shown to reduce the levels of pro-inflammatory cytokines, such as TNF-α, IL-1β, and IL-6 [26,27], could have been elevated in bronchiectasis patients to compensate for the levels of inflammatory cytokines. There is mounting evidence that lifelong chronic smokers have a 50% probability of developing COPD during their lifetime [28]. In accordance with a chronic smoking history [29], nicotine levels were elevated in COPD patients. Additionally, the levels of N-acetyl serotonin, a potent antioxidant [30], may have been elevated to minimize the excessive oxidative stress caused by cigarette smoke in COPD patients [31]. This may partly explain why specific anti-inflammatory metabolites can be induced by strong inflammatory responses differently in patients who have either COPD or bronchiectasis.

These results must be considered in the context of the study limitations. First, although some of our results showed a trend, they were not statistically significant, which could potentially be explained by the small sample size. Moreover, the small sample size of both groups further limited the possibility of adjusting for confounders, making it difficult to generalize our results. Second, comparison of markers of inflammation in a healthy control group was not possible. However, it is well known that patients with stable COPD have higher levels of inflammatory markers than control individuals [35,36]. Thus, it could be inferred that patients with bronchiectasis have higher levels of inflammatory markers than control groups. Third, we did not evaluate the characteristics and biomarkers of bronchiectasis without airflow obstruction. However, we selected age and FEV1% predicted-matched patients with COPD as a control group to compare and evaluate the role of inflammation in the two diseases, regardless of the presence or the severity of an airflow obstruction.

Despite these limitations, a strength of this study is that it compared inflammatory markers, including metabolites, between patients with bronchiectasis that exhibit a limitation in airflow and patients with COPD, which has not been reported previously. Further studies with a larger sample size should be performed to validate the results of this study.

Patients who have bronchiectasis with airflow limitation have higher levels of both systemic inflammatory biomarkers (ESR and CRP) and markers indicating compensation for inflammatory damage (biliverdin IX alpha and L-carnitine). Modulating the inflammatory process in patients with bronchiectasis could improve health outcomes.