1College of Information Science and Technology, University of Nebraska at Omaha, NE, USA

Mariners in merchant marine vessels frequently engage in their duty for several months. Mariners work and live in unstable and limited accommodation areas during their entire voyage at sea [1,2]. A long voyage in an unstable living environment directly influences the physical health of mariners [3,4]. According to previous works [5,6], dynamic ship motions impose less physical activity levels on crew members. Therefore, objective measurements of the physical activity patterns of mariners are crucial for the assessment of physical health in the maritime population under unstable and constrained living conditions.

Recently, accelerometer-based physical activity assessments have been widely adapted to measure daily physical activities [7]. A wearable sensor-based approach for daily activity classification is a viable alternative for seafarers due to their distinctive living conditions. A reliable assessment is required to continuously monitor mariners’ physical activity in a ship’s isolated living environment due to the higher rates of medical problems of mariners compared to age-matched peer groups [8]. To improve wear-time compliance for an extended period including sleeping, placing an accelerometer on the wrist has become a trend in modern physical activity monitoring research [7,9,10]. Since the wrist motion is much more complex than the trunk movement, extracting appropriate wrist motion parameters from the collected wrist acceleration data is challenging but critical in developing an accurate physical activity classifier. Existing studies have extracted and used various wrist movement features (i.e., wrist movement and orientation features) to estimate aspects of physical activity from a wrist accelerometer measurement [11-16]. However, little information is available on classifying physical activity under unstable living conditions.

Therefore, the purpose of this study is to develop accurate wearable sensor-based physical activity classification models under unstable living conditions using wrist motion features. The proposed approach determines wrist movement characteristics using the roll and pitch angles of the wrist and the magnitude of the wrist movement. The extracted characteristics are then applied to predict the current wrist pose and motion features. In this study, a simple decision tree model for visual interpretation and two sophisticated models to improve classification outcomes were developed. The following sections explain the details of data processing and analysis in the proposed classification models.

A wrist-oriented sensor was chosen instead of an upper trunk attachment option because we hypothesized that the wrist motion might overwhelm a ship’s motion at sea [12]. Any students who were older than 19 years of age were eligible to participate in this study, and participants who were able to perform activities of daily living without limitations were included in the study. Twenty-eight subjects (n=28) participated in the study. The participants were cadets on the training ship of Mokpo National Maritime University in Korea. The characteristics of participants are shown in Table 1.

Table 2. Activities undertaken in the experiment.

We assume that there are distinctive wrist movements related to certain physical activities. The wrist orientation and wrist motion are estimated using the 3-dimensional acceleration data collected from a single wrist-worn accelerometer. We first extract distinctive features of wrist poses and motions from target daily activities and then apply machine learning algorithms to infer current activities of the subject based on the collected distinctive features. The roll and pitch angles of the sensor and the vector magnitude of the sensor acceleration are computed to assess the current wrist pose and motion. The wrist pose is defined by the Euler angles of the wrist rotation on the horizontal plane [13]. The three-axis acceleration data from the sensor consist of three different types of acceleration: linear acceleration, rotational acceleration, and gravity. The three-axis acceleration of the wrist motion is written as follows:

We apply an approximation algorithm to obtain the roll and pitch angles when the absolute value of Vector Magnitude (VM) is between 0.8 and 1 g. If not, the acceleration samples are ignored.

Equations 1 and 2 show how to estimate the roll and pitch angles from the X- and Z-axis acceleration. The pitch angle is obtained using Equation 2.

where ax is the X-axis acceleration and g is gravity.

Then, the roll angle is calculated using the following equation:

where ay is the Y-axis acceleration and g is gravity.

A simple decision tree model is selected for the visual interpretation of the model. Then, sophisticated algorithms based on the K-Nearest Neighbors algorithm (KNN) and Support vector machine algorithm (SVM) are implemented to maximize the classification accuracy for fundamental physical activities including lying, sedentary activities, walking, and running. We first introduce three simple decision tree classification models with two of three features to visually evaluate the efficacy of the wrist motion features. As shown in Figure 1, different physical activities are associated with different wrist motion features. For example, running and walking activities form two dense clusters along the vector magnitude axis. The clusters represent how wrist pitch angles are nearly parallel to the horizontal position; roll angles are closer to vertical and to the horizontal plane, whereas lying and sedentary activities show a wide range of wrist roll and pitch angles. From observation, we might expect that walking and running activities can be discriminated from static activities (i.e., lying and sedentary) by using the VM. However, classification of two static activities might require more complex boundaries since some parts of each activity are overlapped with others. 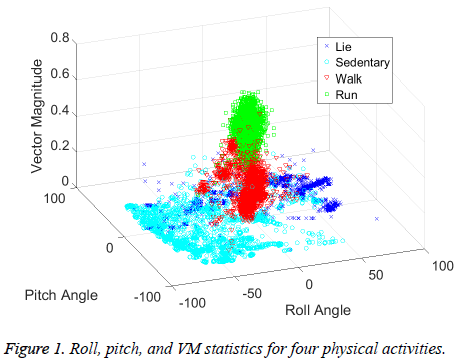 The accuracy of the simple decision tree model for the four physical activities is 88.7% on average. Although the simple model resulted in confusion between lying down and sedentary behaviors, the model reliably predicted each physical activity by providing interpretable decision boundaries using the three wrist movement features.

In the study, we proposed a wearable sensor-based method to classify mariners’ physical activities at sea. The study was conducted on the selected training ship, which has the same physical living conditions of the maritime population. Because there are typically fewer than twenty crews on a single ship, it is difficult to have a statistically substantial number of participants on a single merchant marine vessel. This study selected a training ship at a maritime university since the ship has more than one hundred student trainees aboard. Compared to the standardization procedures for physical activity classification systems [15], the protocol of this study fulfilled the validity requirements by providing participants’ information, measurement specifications, target physical activities, and classification algorithms. The developed classification models in this study were focused on the fundamental activities including lying, sedentary activities, walking, and running. Although the fundamental activities were not detailed enough to explain the more complicated physical activities of the maritime population, by using the proposed physical activity classification models, we expect the proposed system will enhance the quality of life and healthcare of mariners by providing valuable information such as the total sleep duration and sedentary behavior duration during their sea lives.

According to the results of these experiments, the wrist orientation described by roll and pitch angles from the horizontal position was particularly effective in differentiating the four major physical activities, even in relatively unstable atmospheric conditions. The results of the study confirmed that the selected wrist motion features effectively captured the differences in major physical activities of crews aboard. The results reflected the previously published observations that wrist orientations are important variables to determine levels of physical activities and locomotion from stable physical activities [11]. The efficacy of the three extracted wrist movement features was evaluated using the simple decision tree model with decision criteria. Moreover, since the simple decision-based model is straightforward and simple, the model can be easily implemented in any wrist-based wearable device. The KNN and SVM models further improved the accuracy of the simple decision-based physical activity classification model for mariners at sea. Nevertheless, improved classification results are promising to classify physical activity in unstable conditions. The proposed physical activity classification models can be used as an objective measurement of mariners’ physical activity levels during their long voyage. We expect that the proposed method can be expanded to identify distinct types of sedentary behaviors, such as reading and typing while sitting, by estimating the wrist orientation and motion features. The proposed approach is still limited to healthy young mariners on a ship. As a future work, we will expand the proposed method to identify various types of sedentary behaviors, such as reading and typing while sitting, by integrating new wrist orientation and motion features with diverse populations.

This research was supported by the Basic Science Research Program through the National Research Foundation of Korea (NRF) funded by the Ministry of Education (NRF-2015R1- D1A1A01058786).