In the present study, a survey of marine sponges for biodiversity and distribution was done along three substations; Sheva creek, Peerwadi coast and Dharamtar creek of Uran coast (Raigad), Navi Mumbai, west coast of India. Sponge samples were collected from intertidal regions and shallow coastal waters monthly from June 2013 to May 2015 during spring low tides. A total of 16 species of sponges representing 12 genera, 10 families and 8 orders were identified. Of these, 13 species belongs to class Demospongiae, 2 to Calcarea and 1 to Hexactinellida. Maximum species diversity of sponges is recorded at Peerwadi coast than Sheva creek and Dharamtar creek. Fewer species diversity at Sheva creek and Dharamtar creek is attributed to the close proximity of these sites to human population, non-availability of suitable rocky stretches for settlement and colonization and to maritime activities of Jawaharlal Nehru Port Trust (JNPT). Sponges from Uran coast are under stress due to discharge of domestic wastes and sewage, effluents from industries, oil tanking depots, maritime activities of Jawaharlal Nehru Port Trust (JNPT) and hectic activities of Container Freight Stations (CFS). This study reveals that marine sponges from Uran coast are facing the threat due to industrial pollution and anthropogenic stress.

The oceans cover about 70% of the earth’s surface, and the marine environment includes tremendous biodiversity; all but two of the 28 major animal phyla are represented (Schwartsmann et al., 2001). Marine sponges (Porifera) are the oldest metazoan group and characterized as sessile active filter feeders and (Hausmann et al., 2006). Phylum Porifera is subdivided into three classes’ i. e. the Calcarea (calcarious sponges with three-rayed spicules of calcium carbonate), the Demospongiae (skeleton of siliceous spicules) and the Hexactinellida (glass sponges with skeleton of six-rayed siliceous spicules). The Demospongiae contains the vast majority of extant sponges living today and represent 85-90% of the global sponge fauna (Thakur and Muller, 2004).

The knowledge on sponge biodiversity is still largely incomplete and to date, 8517 valid species of sponges are enlisted in the World Porifera Database (Van Soest et al., 2014). A total of 486 species of marine sponges have so far been described from the Indian waters (Thomas, 1998; Venkataraman and Wafer, 2005). Sponges show an amazing variety of shapes, sizes and colours (Thakur and Muller, 2004). Undisturbed natural substrates like coral rubbles, rocks and abandoned shells have always supported for the settlement and growth of sponges (Ramakritinan et al., 2015).

Marine sponges have a high frequency of bioactive components for their chemical defences against environmental stress factors such as predation, overgrowth by fouling organisms or competition for space (Perdicaris et al., 2013). They are the richest sources of pharmacologically active compounds found in the marine environment. These bioactive molecules are known as ‘secondary metabolites’ (Sagar et al., 2010).

Sponges are good bioindicators and are convenient tools for characterizing the state of a marine ecosystem (Berthet et al., 2005). Sponge communities can live same locality and are capable of accumulating metals for a long period; hence they have been chosen as indicators to reveal the environmental crises of a selected area (Vogel, 1977; Rao et al., 2009). Sponges have been recommended as a suitable biomonitor species for metal pollution because of their strong ability to concentrate metals in their tissues (Cebrian et al., 2007; Pan et al., 2011).

Sponges are strongly associated with the abiotic environment, very sensitive to environmental stress and are useful tools for environmental monitoring. Chemical monitoring alone is not enough and that pollution is essentially a biological phenomenon because its impact is on having organisms. Stress induces qualitative and quantitative changes in the structure of communities which can usually be assessed by analyzing diversity and relative abundance (Carballo et al., 1996).

Geographically, Uran (Lat. 18º50'5'' to 18º50'20'' N and Long. 72º57'5'' to 72º57'15'' E) with the population of 23,254 is located along the eastern shore of Mumbai harbor opposite to Coloba. Uran is bounded by Mumbai harbor to the northwest, Thane creek to the north, Dharamtar creek and Karanja creek to the south, and the Arabian Sea to the west. Uran is included in the planned metropolis of Navi Mumbai and its port, the Jawaharlal Nehru Port (JNPT) (Figure 1). 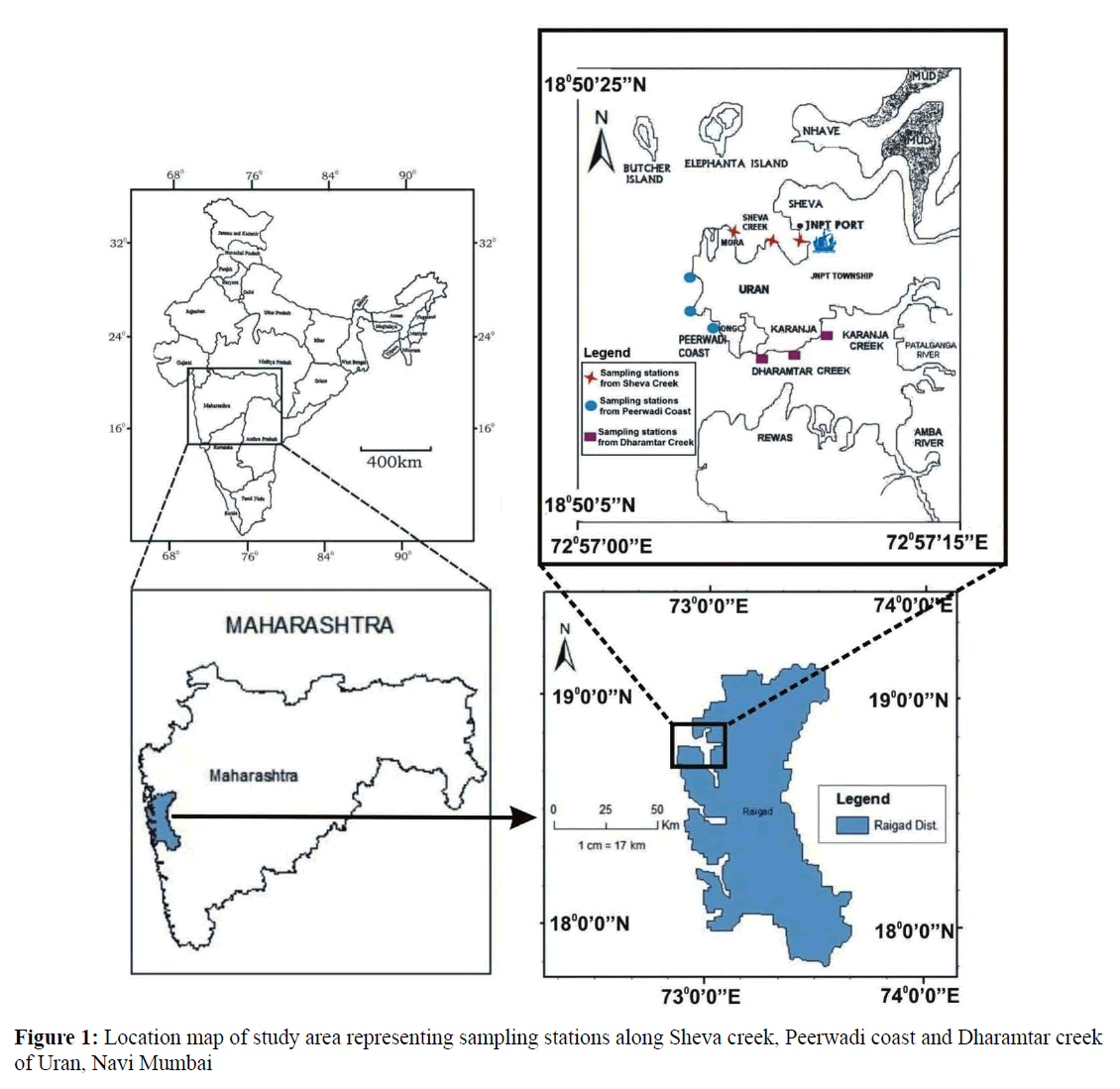 The coast of Uran is a tide-dominated and the tides are semidiuranal. The average tide amplitude is 2.28 m. The flood period lasts for about 6-7 h and the ebb period lasts for about 5 h. The average annual precipitation is about 3884 mm of which about 80% is received during July to September. The temperature range is 12-36ºC, whereas the relative humidity remains between 61% and 86% and is highest in the month of August.

The study sites were surveyed monthly during spring low tides from June 2013 to May 2015 and sponge samples were collected from intertidal regions and shallow coastal waters. Surveys were carried out to record the diversity of sponges and they were removed from the substrate with a chisel and protective gloves. Sponges were collected in clean polythene bags; one sample per bag and microphotographs of the sponges were taken with Cannon EOS1100D digital camera and they were brought to the laboratory.

In the laboratory, morphological characteristics of each specimen including size, shape, colour, texture, total length, and breadth and osculum diameter were recorded (Vinod et al., 2014). The specimens were washed under tap water and then fixed in 10% formaldehyde-seawater solution and then transferred into 70% ethanol.

Preparation of spicules and skeletons was made as per methods recommended by Rutzler (1978) and Evcen and Çinar (2012). Preparations of spicules were made by dissolving sponge fragments in boiling nitric acid, and after rinsing in water and ethanol, spicules were observed under microscope and classification of spicules was made as per work of Hooper and Van Soest (2002) and Evcen and Çinar (2012). Sponges were identified following the standard taxonomic keys of Picton (2007), Venkataraman et al. (2012) and Van Soest et al., (2014).

A total of 16 species of sponges representing 12 genera, 10 families and 8 orders were recorded from Uran coast (Table 1) and (Figure 3). Of the recorded species, 13 species belongs to class Demospongiae, 2 to Calcarea and 1 to Hexactinellida. The percentage distribution (by order) of sponges recorded from Uran coast (Figure 2) showed that the Order Halichondrida had the highest species composition (31.25%), followed by Leucosolenida, Axinellida, Hadromerida, and Poecilosclerida each with 12.5%. The Order Haplosclerida, Homosclerophorida and Hexactinosida had a composition of 6.25% species in each. 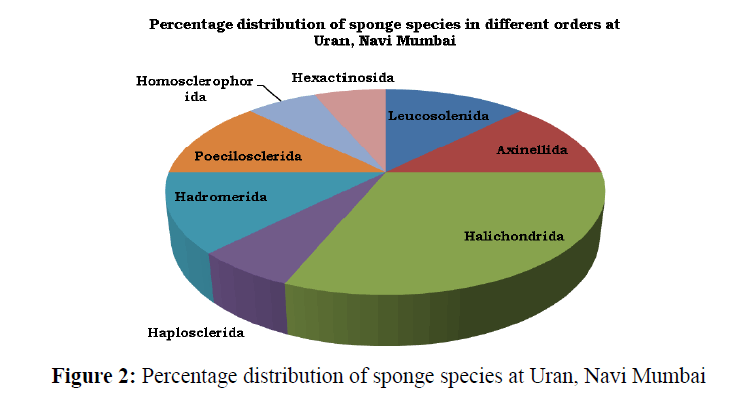 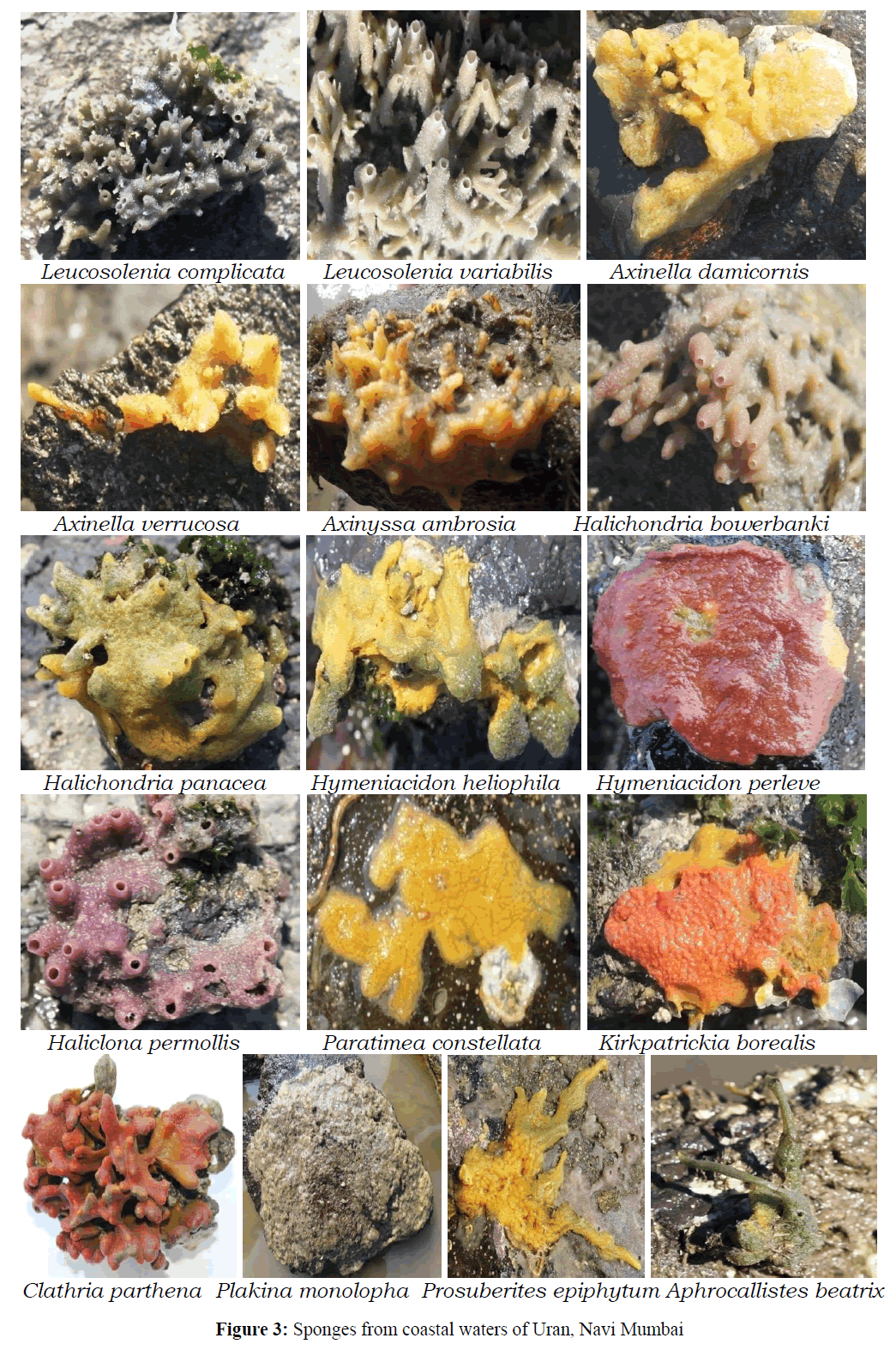 The Peerwadi coast is characterized by rocky stretches which would provide suitable substratum and appropriate habitat for easy settlement of the larval forms and better colonization of sponges (Vinod et al., 2014). Abdul Wahab et al. (2014) and Ramakritinan et al. (2015) have noted that undisturbed natural substrates like coral rubbles, rocks and abandoned shells have always supported for the settlement and growth of sponges. This is also attributed to the water flow; because increased water flow provides greater availability of suspended food (Duckworth and Battershill, 2003). Bell and Barnes (2000) reported that water flow, wave action and current speed acts as limiting factors for growth of sponges and slower growth of sponges in recorded in weak currents. Easson et al. (2015) shows that, in Bocas del Toro, Panama, a sponge community in close proximity to human populations consisted of fewer species whereas the community at a site distant from human development included a more diverse assemblage of species.

Dharamtar creek is the confluence of Karanja creek, Patalganga River and Amba River, opening into southern part of Mumbai harbor. Intertidal region of Dharamtar creek is with rocky and coral substratum towards the Dronagiri Mountain whereas remaining part of the creek is dominated by the marshy areas and mud flats. Towards the Revas side, upper littoral zone is sandy and remaining part of the creek is marshy with mud flats. The rocky substratum of Dharamtar creek supports moderate species diversity of sponges. This is attributed to the waste water received from petrochemical complex and other industries that opens into Dharamtar creek (Pawar and Kulkarni, 2007).

Percentage species composition of sponges at Uran coast shows maximum number of species from class Demospongiae than Calcarea and Hexactinellida. It could be correlated to the availability of rocky stretches, favorable physical factors, such as water turbidity, salinity, wave exposure, substrate availability, tidal ranges, and biological factors such as competition, larval supply, and predation (Diaz, 2005). Results of the study are in agreement with earlier reports of Putchakarn (2011) along Chanthaburi and Trat Provinces, the eastern coast of the Gulf of Thailand, Ramkumar et al (2013) in South Andaman, Raghunathan et al. (2014) in Andaman and Nicobar Islands and Vinod et al. (2014) in Enayam to Kollam, India.

During present study, maximum number of sponge species belonging to class Demospongiae (81.25%) was recorded followed by Calcarea (12.5%) and Hexactinellida (6.25%). Results of the study are in agreement with Thai (2013) from coastal waters of Vietnam where of the 299 sponge species identified, class Demospongiae represents highest number of species (281 species occupying with 94% of the total).

The coastal environment of Uran has been under considerable stress due to onset of JNPT and other industries since 1989. Hectic activities of Container Freight Stations (CFS), urbanization, industrialization, and reclamation on the coast around Uran result in the loss of mangrove biodiversity. Several incidences of coastal pollution occur because of leakage/discharge of transporting materials along with industrial effluents (Pawar, 2013).

This study shows that the Uran coast harbors a diverse group of marine sponges. Species composition of sponges reveals that species belonging to class Demospongiae were dominant over the Calcarea and Hexactinellida. The study also demonstrates that sponge community in close proximity to human populations consists of fewer species whereas the community at a site distant from human development shows more diverse assemblage of species. The variation in abundance of species could result from biological and physical factors such as localized disturbance events, differences in food availability and patterns of water transport affecting larval dispersal. Discharge of sewage, industrial wastes, effluents, maritime activities of Jawaharlal Nehru Port (JNPT), Container Freight Stations (CFS) and anthropogenic stress will affect the species diversity of sponges from Uran coast in near future. Present information on species diversity of sponges would be helpful as a baseline data for further monitoring of anthropogenic inputs on sponges from Uran coast.

Financial support provided by University Grants Commission, New Delhi (File No: 42–546/2013 (SR) dated 22nd Mar 2013) is gratefully acknowledged. The author is thankful to The Principal, Veer Wajekar Arts, Science and Commerce College Mahalan Vibhag, Phunde (Uran), Navi Mumbai 400 702 for providing necessary facilities for the present study. Special thanks to Dr. Rahul B. Patil for providing healthy cooperation during field visits for photography of the study sites and sponges. Thanks are due to Mr. Sanket S. Shirgaonkar, who worked as a Project Fellow for the present study. Thanks to Dr. Atul G. Babar for the help rendered during preparation of location map of study area.