Background: Malnutrition is alarmingly decreasing the two-decade, but still major public health problems in the world, especially in developing countries, include Ethiopia. Stunning and wasting rates are dropping, but 159 million and 50 million children around the world still affected respectively. Malnutrition in Ethiopia in the form of stunting, underweight and wasting were as 44%, 29% and 10% and Oromia national region state 44.1%, 39.6% and 12.5%, respectively under five children. Objective: the aim of this study is to assess magnitude of malnutrition and associated factors among under-five children in Shashamene Referral Hospital, Oromia Ethiopia, 2016. Method: Facility based cross-sectional design was conducted. Systematic random sampling technique was used. After data collection SPSS 20.0 was employed for data entry, organize and analysis. Odd ratio and p value were computed to identify the presence and strength of association and <0.05 stastical significance was declared. Results: The magnitude of stunting, underweight and wasting were about 38.3%, 49.2% and 25.2 %, respectively. Educational status of mother and child age was significantly associated with stunting. Complementary food was associated with underweight and occupation of mother was associated with wasting. Conclusion and recommendation: This study revealed that malnutrition was high than the regional and national figures found from Ethiopian Demographic Health Survey 2011. Community based nutrition program need to be established to tackle the problem of malnutrition at community level depending on the severity of malnutrition identified in this study. Nutrition education by health extension works need to be strengthening to improving the feeding practice of parents on appropriate children feeding.

Malnutrition is alarmingly decreasing the two-decade, but still major public health problems in the world, especially in developing countries, include Ethiopia. Stunning and wasting rates are dropping but 159 million and 50 million children around the world still affected respectively [1]. Malnutrition is attributed one third of under-five death in the first five years of live, which is preventable by economic growth [2]. Globally, one out of every 13 children were wasted, which is 16 million children were severely wasted [1].Children malnutrition affects academic performance, physical and mental development throughout their lives [2,4]. Under-five malnutrition is an indicator of one’s counties health status as well as economic conditions [5]. Malnutrition among children is a critical problem because its effects are long lasting and go beyond childhood. It has both short and long term consequences [6,7]. Malnutrition especially under five still devastating problems in developing countries, especially in sub-Saharan Africa, including Ethiopia [8]. Stunting, wasting, and underweight are among those anthropometric indicators are commonly used to measure malnutrition of under five children. Underweight (low weight-for-age) reflects both low height-for-age and low weight-for-age and therefore reflects both cumulative and acute exposures of malnutrition [9]. Ethiopia has a high prevalence of Acute and chronic malnutrition, with almost half of Ethiopian children chronically malnourished and one-inten children wasted. About 47% of children under-five are stunted, 11% are wasted and 38% are underweight [10]. Epidemiological studies were conducted in developing countries have identified several factors associated with under nutrition, including low parental education, poverty, low maternal intelligence, food insecurity, rural residence and sub-optimal infant feeding practices [4,11]. Nearly half of death under-five is attributable by malnutrition. Malnutrition puts children at greater risk of dying from common infections, increases the infection and delayed recovery. Poor nutrition in the first 1,000 days of a child’s life can also lead to stunted growth, which is irreversible and associated with impaired cognitive ability and reduced school and work performance [12]. An estimated 53% of infection death is the effect of malnutrition on diseases such as measles, pneumonia, and diarrhea [13,14]. Underweight and stunting rates among young children are the highest in sub-Saharan Africa. About two in five children (38%) are underweight, 10.5% of the children are wasted (2.2% are severely wasted) and 46.5% of the children are stunted that half of them are severely stunted [15]. Malnutrition in Ethiopia is serious and 44% of children were stunted, 10% wasted and 29% underweight with wide regional variations [16-18].

The study was conducted in Shashemane Referral Hospital from April 1 to May 24, 2016.Shashemane Referral Hospital is located about 240 km from the capital, Addis Ababa. It is one of the hospitals that provide health service including screening for malnutrition in Shashemene and surrounding area. The study population were systematically selected under-five children and their caregivers who utilize under-five OPD at Shashemane Referral Hospital. Children under five years of age, who were visit the OPD at Shashemane referral Hospital and their care givers (mother, foster who live with the child at least for 6 months), were interviewed. Children who are severely ill and admitted were excluded. Facility based cross sectional was employed .The sample size was determine by using single population proportion with 95% confidence interval and marginal error of 5%, by taking a maximum value of 50%.The required sample sized was 384. Non response rate of 10% that means 38 sample sizes was added. The total sample size was 422.

Shashemene referral hospital was selected by simple random sampling methods. The number of Under five children who have been attended an under five OPD were counted for the last six consecutive month and found to be 2350, then we were taken average two month divided by total sample size 422 to get “K” value. Then K equal to 5.6. The first day was started arbitrarily, then proceed every “6” value. Then, the data was collected daily every 6 under five OPD patients until the total sample size was finished. Pre-tested an anonymous interviewed structured questionnaires were prepared after reviewing different relevant literatures. The questionnaires were first prepared in English and then translated to Amharic, the local language of the respondents in the study area. The questionnaires were administered to all under five OPD patients during the data collection period, and who met the inclusion.

Length was taken for those less than two years old children in recumbent position and the height for those above two years children in erect position. Measurement of height (length) was done in a lying position with wooden board for children of age under two years (below 85 cm) and for children above two years stature will be measured in a standing position in centimeters to the nearest of 0.1 cm. The weight was taken using the weighing scale. For those children who can’t stand weighed with their mother and the mother’s weight was subtracted. The weighing scale was adjusted before each measurement. Weight was measured with minimum clothing and no shoes using a weighing scale in kg to the nearest of 0.1 kg. Only children under 110 cm (proxy for 5 year) and over 65 cm (proxy for 6 month will be questioned to ascertain age using detail season calendar and the presence or absence of pitting edema was checked by pressing child’s foot bilaterally.

Reflects body mass relative to chronological age; Often used if the child is normal, under or over weight. It is a simple index but does not consider height. It is influenced by both the height (height-for-age) and weight (weightfor- height) of a child and its composite nature makes interpretation complex. For example, weight-for-age fails to distinguish between short children of adequate body weight and tall, thin children.

Reflects body mass relative to height; It is a measure of acute or short term exposure to a negative environment. It is sensitive to calorie intake or the effects of disease. Wasting (thinness) reflects a deficit in tissue and fat mass and indicates that the child don’t weigh as much as they should for their height. In most cases a recent and severe process of weight loss, which is often associated with acute starvation and/or severe disease. It is the first response to nutritional and/or infectious insult.

Reflects height relative to chronological age; It is used to tell if a child is the normal height for age. Stunted growth (shortness) reflects failure to reach linear growth potential (pre and postnatal) as a result of sub-optimal health or nutritional conditions. On a populationwide basis, high levels of stunting are associated with poor socio-economic conditions and increased risk of frequent and early exposure to adverse conditions such as illness and/or inappropriate feeding practices. It is assumed to indicate long term, cumulative effects of inadequate nutrition and poor health status. It is a measure of past nutrition condition. The worldwide variation of the prevalence of low H/A is considerable, ranging from 5 percent to 65.

To maintain the quality of data questionnaires was prepared in English and translated in to Amharic and again translated to English to ensure consistency and reliable. The data were collected by 4th year five midwifery students by face to face interviewed methods. To ensure the quality data pretest was done in Melkaoda hospital by using 5% of sample size to check validity and reliable. Every day filled data was checked incompleteness and inconsistency by principal investigators.

To ensure the quality of data, all filled questionnaires were checked incompleteness and inconsistency. Data were entered using Epi Info version 3.5.1 and exported to SPSS version 20.0 for statistical analysis. Descriptive statistical analysis was used to compute frequency, percentage and mean for independent and dependent variables. Binary logistic regression analysis was used to ascertain the association between explanatory variables and outcome. Variables with significant association in the bivariate analysis were entered into multivariate analysis to determine factors associated with malnutrition. Variables with P value less than 0.05 was considered as statistically significant. Finally the results were presented in texts, tables and graphs.

Ethical clearance was obtained from Hawassa University College of Medicine and Health Sciences were taken to Shashemane Referral Hospital administer office and permission was obtained and then a brief explanation of the purpose of the study was explain and individual verbal consent was obtained from the mother or any one with child before starting the interview or taking body measurements. Those respondents who were not willing to participate in the study were not forced to be involved. The respondent was also being informed that all data obtained from them were kept confidential by using coding instead of any personal identifiers and is meant only for the purpose of the study.

Characteristics and Caring Practice of Children 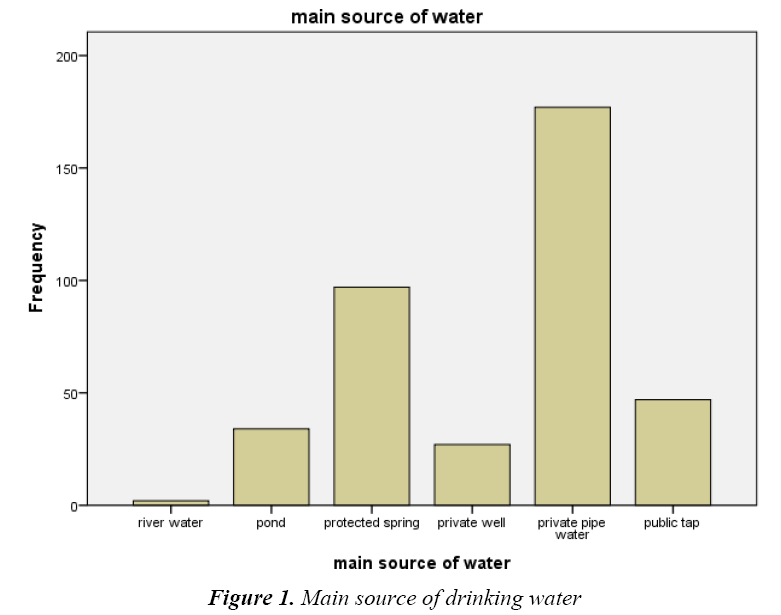 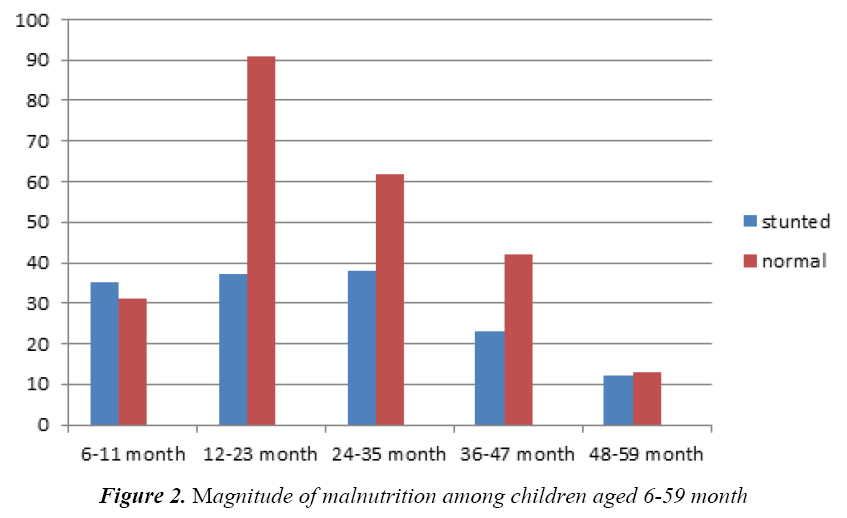 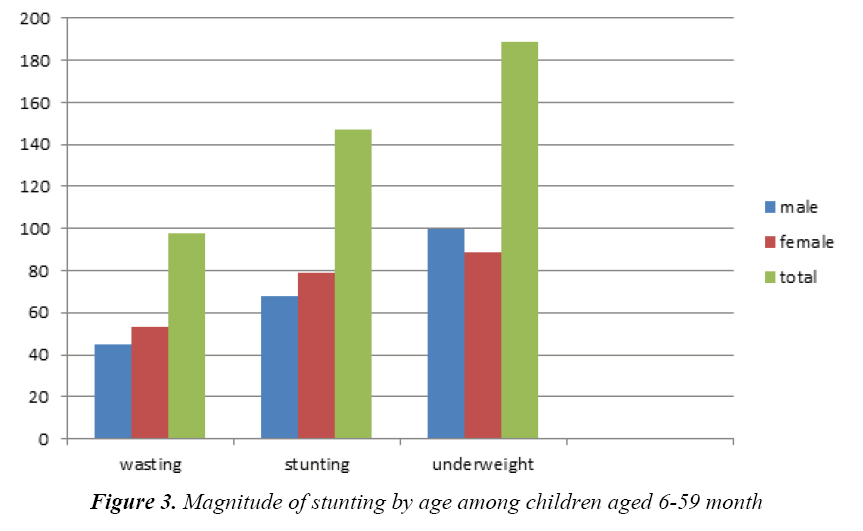 Figure 3: Magnitude of stunting by age among children aged 6-59 month 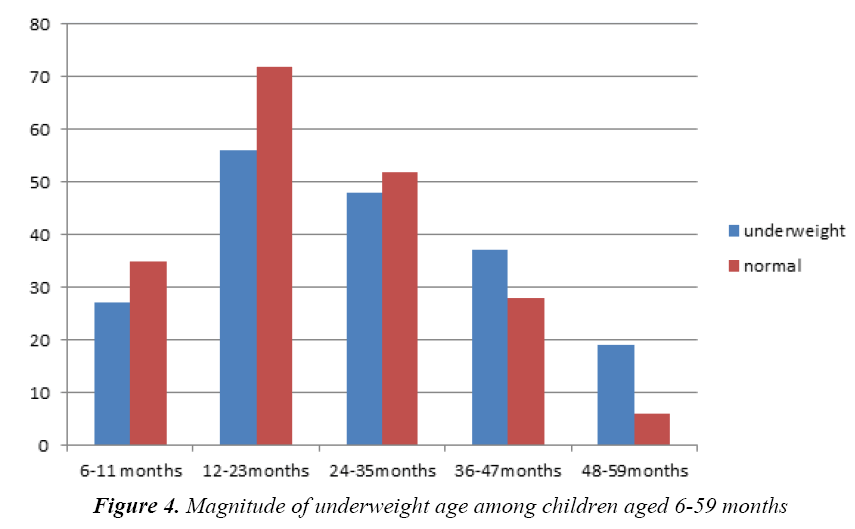 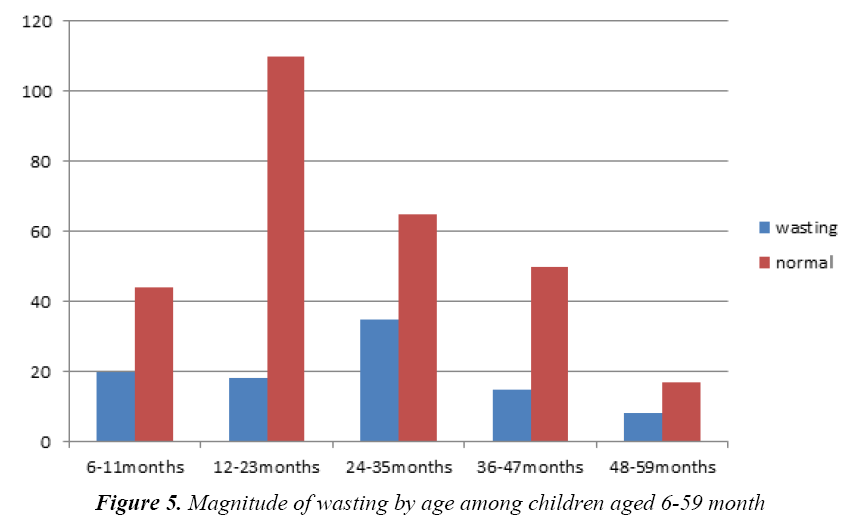 Figure 5: Magnitude of wasting by age among children aged 6-59 month

The magnitude of stunting, underweight and wasting were about 38.3%, 49.2% and 25.2%, respectively. This study was revealed that, magnitude of malnutrition was high than the regional and national figures found from Ethiopian Demographic Health Survey 2011 national reports. Educational status of mother and age of child age were the only variable that was significantly associated with chronic malnutrition (stunting). However, child age and type of complementary food for the child were significantly associated with underweight. Community based nutrition education program need to be established to tackle the problem of malnutrition at community level. Nutrition education by health extension works need to be strengthening to improving the feeding practice of parents on appropriate children feeding.

The authors’ like to acknowledge Hawassa University College of Medicine and Health Sciences, School of Nursing and Midwifery for giving me this opportunity. The authors’ would like to say thank you to the data collectors who participated in the data collection process.