Purpose: To examine the major chromosomal abnormalities and chromosome polymorphism in couples with recurrent miscarriagesand provide valuable information for their genetic counselling.

Methods: 1543 couples with three or more times of spontaneous abortions were analysed using Gbanding and fluorescence in situ hybridization (FISH) or array comparative genomic hybridization (aCGH) where ever necessary at the Renmin Hospital of Hubei from January 2012 to December 2014.

Recurrent miscarriage (RM) is usually defined as the occurrence of 3 or more consecutive pregnancy losses before 20 weeks of gestation or the loss of three consecutive foetuses of less than 500 g in weight [1]. There are different reasons for RM including genetic abnormalities, maternal and paternal age, endocrine dysfunction, autoimmune disorders, infectious diseases, environmental toxins and congenital or structural uterine anomalies [2].

Because the heterochromatic region of chromosome consists of highly repeated sequences of satellite DNA that does not encode proteins, the chromosomal polymorphism variations are considered normal karyotypic variations [6]. However, many recent studies indicate that chromosomal polymorphisms may cause certain clinical effects, such as infertility and recurrent miscarriages [7,8].

This study was done from January 2012 to December 2014. A total of 1543 couples with RM were offered chromosomal analysis. In all the cases the detailed reproductive case histories were taken and karyotypes were generated from the peripheral blood lymphocyte cultures and fluorescence in situ hybridization (FISH) or array comparative genomic hybridization (aCGH) were done if necessary at the Renmin Hospital of Hubei.

Metaphase chromosome preparations from the peripheral blood cultures were made according to standard cytogenetic protocols. Cytogenetic analysis was performed by G-banding at approximately 380 band level. C-banding was done to confirm the heterochromatin and satellites on acrocentric chromosomes wherever necessary. FISH (Fluorescence in situ hybridization) was performed to confirm chromosome translocation [9], aCGH (array comparative genomic hybridization) was performed for identifying and analysing chromosome fragment repetition and deletion, for defining the loci of the chromosome fragment repetition [10].

Thirty metaphases were analysed in all the patients but in cases of abnormalities the study was extended to 50 metaphases, in cases of mosaicismhe the study was extended to 100 metaphases. Karyotyping of each couple was carried out according to the International System for Human Cytogenetic Nomenclature (ISCN2013). Along with the structural rearrangements and aneuploidies the chromosome polymorphisms were also studied.

In this study three novel cases were described.

This case was occasioned by the ascertainment of a 25-year-old Chinese man (IV-1) married to a non-consanguineous woman with normal chromosomes (IV-2). This couple had a son who died at the age of 6 months. The karyotyping analysis of IV-1 was authenticated by the Chinese Academic Committee of the state key laboratory of medical genetics with previously undescribed balanced human karyotype 44,XY, der (14;15) (q10;q10), der (14;15) (q10;q10) (Figure 1). 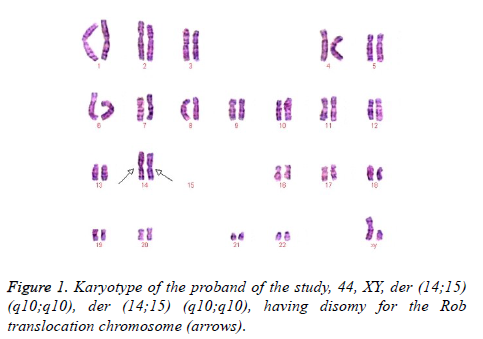 The parents of the propositus are phenotypically normal first consigns, each a carrier of the same Rob translocation (-1, 2). Their parents, a mutual uncle, and both grandparents are deceased, thus it is not possible to determine whether I-1 or I-2 was the carrier of the translocation (Figure 2). 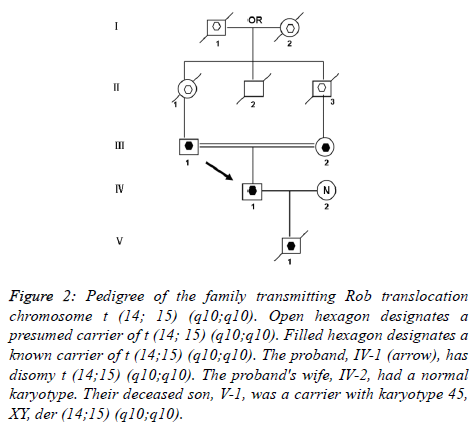 In order to provide advice for their genetic counselling, we have done sperm FISH for IV-1 and 1.

Table 4. Cytogenetic and spermiologic results of IV-1 and 1.

A total of 4,000 sperm nuclei from the two translocation carriers were analysed for this study. The results of the segregation analysis are detailed in Table 5 and Table 6.

Table 5. The number of spermatozoa scored the alternate mode of segregation, incidence of sperm nullisomy, disomy and 3:0 /diploid for the chromosomes involved in the Rob translocation in two Rob translocation carriers.

The nullisomy, disomy and diploid rates for chromosomes 18, X and Y in 1 and IV-1 are summarized in Table 3. In 1, the higher frequencies of aneuploidy for sex chromosome were observed. The incidence of spermatozoa with nullisomy disomy and diploid for the sex chromosomes of 1 was significantly higher compared to that of IV-1 (P<0.05). But, compared IV-1 with controls, the incidence was not significant [13-17].

A 29-year old woman with normal phenotype was referred for chromosomal analysis due to RM. Cytogenetic analysis had revealed a previously undescribed karyotype of 46, X, t(X; 13;9) (q21;q13;p22), t(3;6) (p13;q23) (Figure 3). Because of her karyotype, we suggested that she could choose PGD (preimplantation genetic diagnosis) or to adopt child. 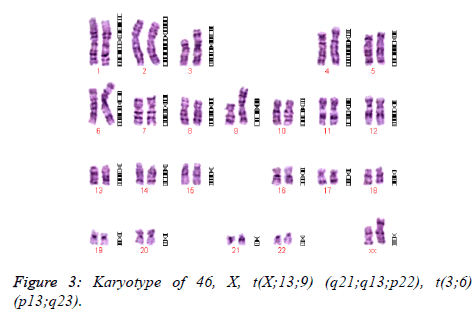 A 35 year-old man was referred for chromosomal analysis due to RM of his identical twin. His karyotype showed 47, XY, +mar.

We have done aCGH for him in order to find out the source of the small supernumerary marker chromosome and aCGH using Agilent’s 8 × 60 K commercial arrays (Agilent Technologies, Santa Clara, CA, USA) was performed on DNA extracted from peripheral blood [19]. 2.05 Mb duplication was detected at chromosome 15 q11.1-q11.2 or arr 15q11.1q11.2 (20,481,702-22,509,254) x3 (Figure 4). By checking the CNV database, we know that this duplication is a kind of chromosomal polymorphism in normal population. 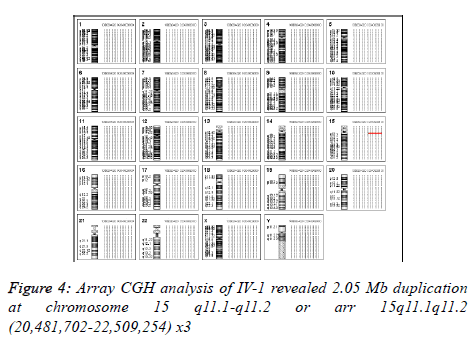 Because of these, we suggested that he can try to conceive naturally, and now he has a daughter whose karyotype is 46, XX.

The most likely pathogenic mechanism behind RM is a multifactorial mode of inheritance. Several causes such as single gene mutations, genomic imprinting, chromosomal instability, and sperm chromosome abnormalities have been suggested to explain idiopathic reproductive loses. Cytogenetic studies give considerable information about the genetic makeup leading to RM and still remain an important tool. To the couples with RM, the risk of finding a chromosomal anomaly (especially structural chromosomal anomaly) is significantly higher [2]. Because of such rearrangements, the chromosomes have difficulty in pairing up and dividing evenly during meiosis. So the carriers of BRT have a risk of partial trisomy or partial monosomy for chromosomal regions involved in the translocation.

The role of polymorphic variants of chromosomes in RM has not yet verified. In recent years, more and more studies have shown an increased incidence of chromosomal polymorphism variation in RM couples [23].

The most frequent chromosomal polymorphism in the general human population is inv (9). This inversion is usually a normal polymorphism; however, its clinical consequences remain unclear [24]. In addition, the additional G-band in the cases of 9 qh+ and 16 qh+ is not believed to be an etiological cause of abortion because this band is in the heterochromatin blocks, which contain no active genes [25,26].

Present study confirmed that chromosomal abnormalities are common in couples having recurrent miscarriages. We discussed the significance of balance translocation and chromosomal polymorphism in RM couples.

The findings in our sample are consistent with figures described in several populations around the world. The overall incidence of chromosomal abnormalities indicates that chromosomal analysis of the couples with RM should be essentially considered. Among the novel karyotypes, we report for the first time two unique cases of chromosomal translocation associated with RM.

Genetic counsellors should pay attention to the chromosomal anomalies and polymorphism in the couples with recurrent miscarriages.