The aim of the current investigation was to scrutinize the protective effect of luteolin against the STZ induced Diabetic Cardiomyopathy (DCM) in rats. The type II diabetes model was selected for the DCM study. In that study, we have used the low dose of the Streptozotocin (STZ) along with the high energy intake. The rats were divided into following groups viz., normal control; STZ induced DCM group, and last one corresponds to the STZ induced DCM treated with luteolin (10 mg/kg). Results of the investigation showed a reduction in fasting blood glucose level, Total Cholesterol (TC) and Triglyceride (TG) in luteolin-treated DCM rats. Moreover, the treatment group showed elevated Body Weight (BW) along with Lower Heart Weight (HW)/BW. Additionally, the luteolin-treated group rats confirmed the decrease the Interventricular Septal Diastolic Wall Thickness (IVSD), Left Ventricular Posterior Wall Thickness (LWPWT), Left Ventricular End-Diastolic Diameter (LVEDD) and increase in Heart Rate (HR). Luteolin also induced the significant improvement in the expression of GSK-3β and phosphorylation of Akt in the myocardium. The findings of the current study suggest that the luteolin might have a beneficial effect against DCM via improvement the Akt/GSK-3β signalling pathway.

Diabetic Mellitus (DM) is a metabolic disease distinguished via high blood glucose level, which occur due to a problem related to the insulin unavailability or insulin secretion from the pancreas or both [1]. Presently, the DM has been identified as a serious health problem and is supposed to reach 440 million globally by 2030 [2]. It causes the development of complication such as non-ketotic hyperosmolar coma, ketoacidosis, stroke, kidney failure, heart disease and eyes damage. Currently, the Type II Diabetes (T2D) mostly affect to the young adults. The cardiovascular disease, particularly, the heart failure has been identified as the main cause of morbidity and mortality of patient affected by diabetes. The Diabetic Cardiomyopathy (DCM) is a frequent complication of diabetes characterized by the myocardial dysfunction due to hypotension, lack of coronary artery or valvular heart disease [3]. It can bale to induce the systolic and diastolic dysfunction injury, which results in heart failure and myocardial ischemia. The myocardial lip metabolism, inflammation, myocardial fibrosis, myocardial apoptosis, mitochondrial damage and oxidative stress are the factors, which play a significant role in the expansion of DCM [4]. The expansion of the DCM has been not clear and possible mechanism is still unclear.

Flavonoids are universally distributed and widely regarded as secondary metabolites of plants endowed with various pharmacological properties, for instance, antiviral, anticancer, antioxidant, anti-inflammatory and anti-parasitic activity. Like other flavonoids, luteolin as shown in Figure 1 (3, 4, 5, 7- tetrahydroxyflavone), is often found in the various vegetables and fruit materials in the form of glycosides and has contributed as the antioxidant property in different diseases. It also associated to have the anti-inflammatory, anti-allergic and anti-cancer activity. 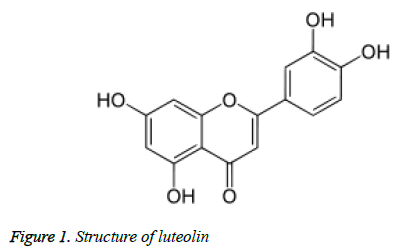 Owing to the excellent anti-inflammatory, anticancer, antioxidant and free radical scavenging potential of luteolin, we assume that it might possess the protective effect against the DCM. Therefore, in the current study, we have used the rat model of DCM induced via a low dose of STZ and intake the high energy to the rats, to scrutinize the beneficial effect and possible mechanism of action.

Animals: The Swiss Albino Wistar (100-130 g, male, 2- month-old) rats were used for the experimental study. The animals were procured from the departmental animal house and stored in a single cage in the laboratory conditions. The animals were stored in the departmental animal house with excellent ventilation condition and 12 h light/dark cycle, 60-70% humidity and 22 ± 5°C temperature. Before the experimental study, the rats were provided food and water Ad libitum. The experimental protocol was performed according to the Guide for the Care and Use of Laboratory Animals published by the National Institutes of Health.

Experimental study: The rats were divided into 3 groups, and all group rats contain the 10 animal’s viz., Normal control, DM control and DM+ Luteolin (10 mg/kg), respectively. The all group rats received the orally predetermined treatment for continuous one week.

Estimation of body and heart weight: The heart weight (HW), body weight (BW) and HW/BW of all group rats were estimated at the end of the experimental study.

Estimation of serum myocardial enzymes: For the estimation of myocardial serum enzymes, the samples (blood) were collected and the blood samples were centrifuged at 1500 ×g for 15 min at 4°C. The myocardial enzymes viz., lactate dehydrogenase (LDH), aspartate aminotransferase (AST) and creatinine kinase-MB (CK-MB) were estimated using the autobiochemical system.

Echocardiography: For the determination of the echocardiography, the rats were anesthetized and fixed on the hard board. The front and ventral chest area of the rats were cleaned from the hairs. The echocardiography was set to discharge the 5-12 MHz ultrasound range. The Left Ventricular End-Systolic Diameters (LVESD), left ventricular posterior wall thickness (LWPWT), and left ventricular end-diastolic diameter (LVEDD) were estimated. The Ejection fraction (EF) and fractional shortening (FS) were determined using the following formula

Figure 2: Effect of luteolin on the body weight variance and heart weight ration of the all group rats. The data presented as the mean ± standard error of the mean; *P<0.05, vs. control group; #P<0.05, vs. DM group. 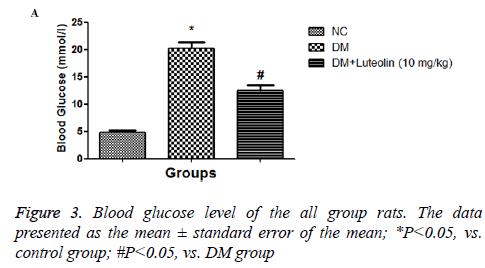 Figure 4: Lipid profile including triglyceride and total cholesterol of the all group rats. The data presented as the mean ± standard error of the mean; *P<0.05, vs. control group; #P<0.05, vs. DM group.

As shown in Figure 5, the DM rats had a slower heart rate (HR) as compared to normal rats, while the HR rate of luteolintreated rats was found to be significantly (P<0.05) improved as compared to DM group rats. The LVESD, LVEDD and IVSD were found to be significantly lowered in DM rats as compared to the normal rats. Ejection fraction (EF) and fractional shortening (FS) had found to be reduced in DM group rats. On the other hand, the luteolin-treated rats confirmed the higher value of EF and FS as compared to DM rats. The result confirmed that the luteolin could reduce the interventricular septal hypertrophy and enhanced the EF and FS in left ventricular (Figure 6). 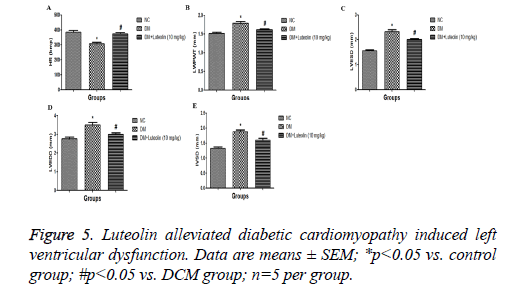 Effect of luteolin on the AKT/GSK-3β signalling pathway

The DCM was firstly characterized by Rubler et al. [9] in diabetes mellitus with congestive heart failure (CHF), although they had no proof of coronary atherosclerosis. Hypotension or coronary artery disease differ from the DCM and is termed as a cardiomyopathy induced via diabetes [10,11]. It can able to influence the systolic dysfunction, left ventricular diastolic and left ventricular hypertrophy dysfunction. Various evidence claims that the DCM is induced via multiple factors, viz., hyperinsulinemia, high cholesterol and blood glucose level, which can change the downstream transcription features, leading to proliferation, endothelial function and myocardial cell expansion. But, the DCM pathogenesis has not been completely explained. To understand the detailed pathogenesis of the DCM, we used the animal model. Whereas, it associated with serious limitations, such as effect of drug treatment or the protective effect of the genetic mutation often start diabetes and obesity [12,13]. Currently, the chemically induced type II diabetes via using STZ is most frequently used. In the current study, the Wistar rats were fed with high energy diet. For 8 weeks. The rats were fed with a low dose of STZ and type II diabetes was successfully developed via confirming the diagnostic diabetic parameters in the animal model.

The DM rats showed metabolic abnormalities, such as an increase in the level of serum and plasma glucose which causes inhibition of insulin discharge via reactive oxygen species (ROS) generated through STZ. The ROS generation consequently inhibited the activity of the endogenous antioxidant system, which induces the oxidative injury to β- cells of the pancreas [14]. The DM rats treated with the luteolin showed a reduction in the level of blood glucose; while, rats correspond to normal control group does not exhibit any difference. Some of the researchers claim that the reduction in the blood glucose level also inhibited the free radical and repressed the lipid peroxidation (LPO) while protecting the βcells via interfering the oxidative stress induced via STZ and enhances the insulin secretion [15,16]. In the current investigation luteolin significantly (P<0.05) inhibit the fasting blood glucose level, resulting in the reduction of lipolysis in diabetic Wistar rats. The STZ induced DCM rats treated with luteolin significantly (P<0.05) reduces the glucose concentration in blood as well as significantly (P<0.05) increase the BW. The DCM rats showed an increase in the level of TG and TC as compared to the normal control. The increase the lipid profile is directly associated with the type II diabetes, which has almost similar clinical symptoms. DCM rats treated with luteolin considerably restored the enhance level of TG and TC almost similar to normal control.

Few clinical study claim that the diabetic patient without suffering any other heart disease more than 5 years illustrated the enlarged left ventricles and atria, and as the disease progressed to advanced stages it enlarges the left ventricle and atrium also. In the current study, we have observed that LWPWT, LVESD, IVSD, and LVEDD were found to be higher in the DCM control group as compared to the normal control at the end of the study. The DCM control rats treated with the luteolin significantly (P<0.05) thinning the IVSD and LEPT and reduced the left ventricular diameter [17]. The DCM causes the enlargement of the ventricular and atrial chambers which are considered as some of the most significant facts that specify the decrease in cardiac output and structural injury. Wu et al., confirm that the patient suffering from the DCM showed the irregular echocardiogram, including most of the patients having diastolic dysfunction, few patients suffer from ventricular hypertrophy and rest of the patient suffer from the systolic and diastolic dysfunction. The EF and FS both are used as the clinical indicator for the determination of the cardiac systolic function [18]. The DCM control group rats showed the higher level of EF and FS, which was found to be significantly reduced by the luteolin treatment, confirming the improvement in diabetes-induced systolic dysfunction [19]. In the current study, our data revealed that the luteolin significantly reduces the blood glucose level, triglyceride and total cholesterol in diabetic rats. This ongoing investigation confirms the potential value of luteolin for the management of type II metabolic syndrome.

The main complication of the type II diabetes is cardiovascular disease and nephropathy; both are closely related to the impairment of AKT/GSK-3β pathways. During the diabetic complication, AKT plays a critical role in inhibition of the inflammatory cytokines and free fatty acids [20]. Additionally, AKT can circulate the cardiovascular functions viz., expansion of myocardial cell, coronary angiogenesis, and cardiac systolic function. The GSK-3β also plays a significant role in the insulin resistance and glycogen metabolism. In the current study, we have observed that the luteolin significantly enhances the GSK-3β and phosphorylation of AKT, confirming that AKT/GSK-3β play an imperative role in the hindrance of DCM [21].

It can be conclude that, luteolin dose dependently decreased the DCM in experimental rats and also it altered the diabetic complication including cardiovascular. Luteolin significantly increase the phosphorylation of AKT and GSK-3β, and proof an important role in the hindrance of DCM via AKT/GSK-3β pathway.