Methods: Sprague-Dawley rats were treated with paclitaxel (3 mg/kg), via tracheal intubation and mechanical aeration. Histopathological changes in lung tissue were determined by haematoxylin and eosin staining. In addition, activity of matrix MMP-2 and MMP-9 was measured by gelatin zymography.

Results: Significant lung injury was found in paclitaxel-treated rats of ≥ 3 mg/kg group, P<0.05. In contrast, lung injury was mild in<3 mg/kg group. Activity of MMP-9 and MMP-2 in lung tissue was significantly increased in all rats received inhaled treatment, P<0.05. However, the magnitude of increase was greater in ≥ 3 mg/kg paclitaxel-treated group compared to<3 mg/kg groups. In addition, the increase of MMP-9 activity appeared to be time-dependently suppressed, whereas the increase of MMP-2 activity was time-dependent exacerbated.

Lung cancer is the leading cause of cancer-related death worldwide [1-5]. Inhaled chemotherapy, which was first reported in 1993, may help fighting lung cancer [6-11]. Inhaled chemotherapy directly delivers chemotherapy drugs to the primary and/or metastatic cancer tissues via nebulization inhalation [12,13]. The concentration of the drugs in the tumor tissue reaches higher than those delivered systemically. During inhaled chemotherapy, the chemotherapy drugs will be absorbed in places where bronchial alveolar capillary and lymphatic network abundantly exist and in active absorption [14]. These places may include tumor tissues. After absorbed by the lung and maybe lymph system nearby, the drugs will enter into general circulation and eventually degraded in the liver [15]. Thus, inhaled chemotherapy may help patients overcome some of the obstacles to chemotherapy, such as cancer cell resistance, low drug accumulation in the lungs, and adverse side effects [16-18]. Previous studies have shown the benefits of inhaled chemotherapy in animal experiment and human beings [19-25]. However, inhaled chemotherapy with drugs commonly used for systematic chemotherapy may produce pathological changes in normal lung tissues [26-30]. Thus, the first goal of the present study was to evaluate the lung injury following inhaled treatment with Paclitaxel (PTX) [31-35]. Matrix metalloproteinases (MMP)-9 and (MMP)-2 have been demonstrated to play important roles in lung injury and remodeling following lung injury [36-40]. Thus, the second goal was to determine the activity of MMP-9 and MMP-2 in lung tissue following inhaled treatment with PTX.

On the experimental day, rats were anesthetized with phenobarbital sodium (i.p.) and atropine (i.m.). After endotracheal intubation was performed, rats were ventilated with room air. Chemotherapy drugs were imbibed by the ventilator via an aspirator pump. Rats in control group were inhaled with saline (30 min/time, once a day) for seven days. Rats in PTX group were inhaled with PTX (3 mg/kg, 0.2 g/L, 30 min/time) on the 1st day of the week for 3 weeks. Rats were sacrificed at 1,2 and 4 weeks after inhalation. The left lungs were immediately fixed with formaldehyde and the right lungs were quickly frozen by liquid nitrogen and then stored at -80°C before measuring MMPs activity.

The histopathological changes in lung tissues were observed by three pathologists who were blinded to the studies.

Gelatin zymography was used to measure the activity of MMPs 2 and 9 as described previously [36]. Briefly, tissue extracts were electrophoreses 10% sodium dodecyl sulphateacrylamide gel containing 0.1% gelatin, rinsed in dd-H2O followed by incubation with bulky volume of renaturation buffer (2.7% TX-100 in dd-H2O) at room temperature for one hour with gentle shaking. The enzyme activity was developed in 50 mM Tris pH 7.5, 0.2 M NaCl, 5 mM CaCl2 and 0.2% Brij 35 at 37°C for 18 hours and stained with Coomassie Blue. The activity of MMP is analysed with NIH image software (edition 1.62). Activities of pro-MMP-2 and MMP-2 were quantified at 66 and 62 kDa, respectively. Activity of MMP-9 was considered a lucid band at 92 KDa (Figure 1). Activities of MMPs were calculated according to the method of Davies et al. [6]. Briefly, the ratio of activated MMP-2 to total MMP-2 activities (62 kDa/66 kDa+62 kDa) was calculated from their gelatinolytic activities measured by computer-assisted image analysis. 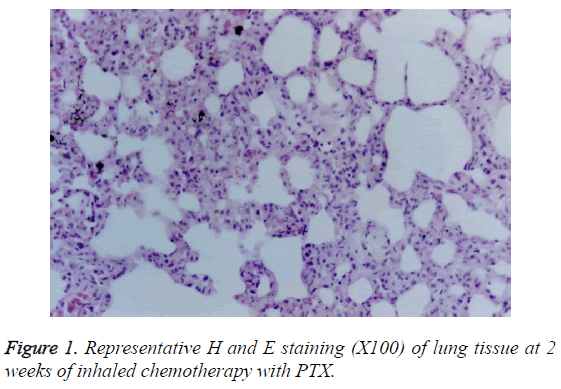 Experiment data were analysed with a SAS software package. For comparison of MMP-9 and MMP-2 activities, results were compared using unpaired student t test. Values are means ± SE. A p value of 0.05 or less was considered to be significant.

PTX-treated group: At 1 week of the treatment, only infiltration of small amount of lymphocytes was observed. At 2 weeks of the treatment, serious injury in large and medium bronchi was found (Figure 1). The histopathological changes included hyperplasia of bronchial epithelia and interstitial cells, epithelial exfoliation, papillary degeneration, oedema in peripheral tissue of walls, mucous degeneration, alveolar wall thickening in the central area, infiltration of large amount of lymphocytes and small amount of neutrophil cells, and duct thickening and alveoli fusion of small bronchus. At 4 weeks of the treatment, reduced oedema, increased bulla, but no fibrosis was observed.

With 2 weeks of the treatment, histopathological changes including hyperplasia of columnar epithelium, erosion, cilia damage, mild congestion in interstitial spaces, and infiltration of lymphocytes were observed in large bronchi (Figure 2). 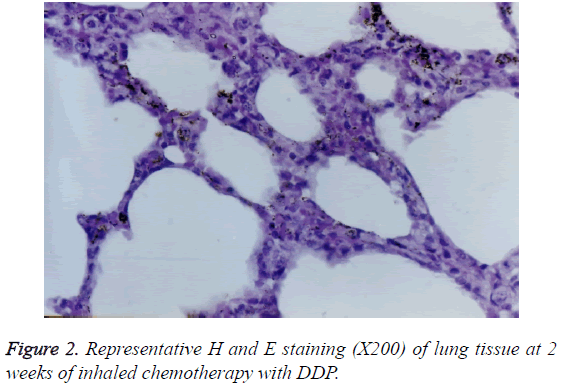 The spaces around the bronchial walls and interstitial tissues were infiltrated by lymphocytes (Figure 3). In addition, oedema and congestion appeared in interstitial spaces. At 2 weeks of the treatment, interalveolar interval and walls of small vessels were thickened. However, no fibrosis was observed. 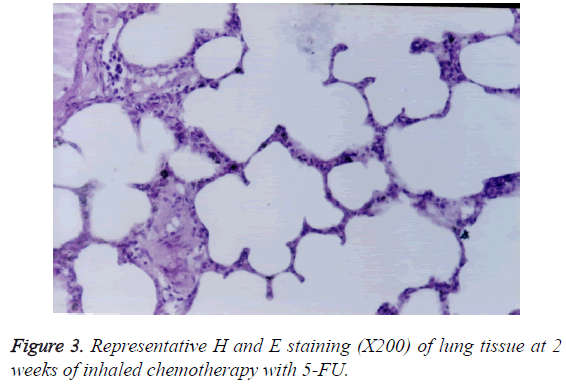 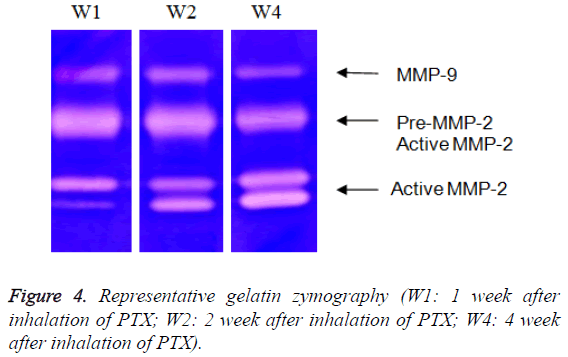 In 1993, Tatsumura et al. first proposed the nebulized inhalation chemotherapy to treat lung cancer [1,41-45]. Since then, progress has been obtained by both experimental research and clinical trial. At normal conditions, the cilia on bronchial epithelium function to discharge secretion and foreign bodies of airway through their swinging activity. But in case of lung cancer, the cilia are damaged and their movements are impaired by excessive secretion of tumor tissue. A reduced capability to exclude foreign bodies may make the inhaled drug to be absorbed better by tumor tissue and remained longer in tumor tissue than normal lung tissue [46]. In addition, angiogenesis featured with a defective, leaky and fragile vascular construction, also occurs in lung cancer [47]. Therefore, the absorption and storage capacity for inhaled drugs may be higher in tumor tissue. This possibility is supported by the evidence that the concentration of the inhaled drugs in tumor tissue reached five times higher than those in normal lung tissues. A higher concentration of inhaled drugs in tumor tissue is beneficial by to get better therapeutic effects without systemic reactions.

As a new therapeutic approach, its safety and side effects should be extensively investigated. Surprisingly, there was no sufficient information regarding the histopathological changes in the lung tissue following inhaled chemotherapy. PTX are commonly used in systemic chemotherapy for lung cancer. In the present study, we evaluated their influences on lung tissue. The doses we used in the present study were determined based on the systematic chemotherapy. We found that inhaled treatment with PTX<3 mg/kg group. Only produced mild histopathological changes in lung tissue, whereas inhaled treatment with PTX>3 mg/kg produced a serious lung injury. In addition, PTX induced some general symptom, including slow movement during first two weeks, poor appetite, bodyweight loss and hair chaos. However, all these symptoms were gradually disappeared at 4 weeks of the treatment. Important future studies would be to identify the impact of low-dose PTX on normal lung tissue.

MMPs are major extracellular matrix-degrading enzymes playing important role in the tissue injury and remodeling. In the present study, MMP-9 and MMP-2 activity slightly increased in animals with mild lung injury, but dramatically increased in animals with serious lung injury. Thus, MMP-9 and MMP-2 may play roles in inhaled chemotherapy-induced lung injury. We noticed that the changing pattern of MMP-9 was different from the one of MMP-2. The increase of MMP-9 activity appeared to be time-dependently suppressed as well as lung injury, whereas the increase of MMP-2 activity was timedependent exacerbated as well as lung remodeling. Thus, increased MMP-9 activity may be related to the lung injury, whereas increased MMP-2 activity may be related to the lung remodeling. In the future, it will be important to determine whether inhibition of MMP-9 will reduce inhaled chemotherapy-induced lung injury.