Ludwig’s angina remains a potentially life – threatening urgent condition affecting the posterior oropharynx, submaxiller and sublingual areas. Because of the airway obstruction in such cases death can be occurred. Tooth extraction , dental infection is the common cause of this cellulit. It causes edema, distortion, obstruction of the upper airway. Initially patients may be managed with observation and intravenous antibiotics(1). However advanced infections need to be treated surgically even in a few days. Awake fiberoptic intubation under topical anesthesia may be the ideal method, and in addition to this tecnique in advanced situations awake tracheostomy may be the succesfull option. Here we present the anesthetic management with urgent tracheotomy of a 32 year old woman who had had a tooth extraction a week ago with comorbidities, scheduled for emergency drainage due to the Ludwig’ angina.

Ludwig’s ang?na is a serious cellulitis of the floor of the mouth, usually occuring in adults with concomitant dental infections. It may obstruct airway necessitating tracheostomy. Dental infections account for 80% of cases of Ludwig’s ang?na [1]. The route of infection is from infected lower molars from pericoronitisan infection of the gums. Usually develops in immunocompromised persons. It is very important to obtain dental consultation for lower third molars at the first sign of any pain, swelling at the angle of the jaw [1].

It is an agressive rapidly spreading cellulitis with potential for airway obstruction and needs rapid intervention to prevent asphyxia and aspiration pneumonia. While maintanence airway tracheostomy under emergency conditions can be needed as seen in our case because of the respiratory problems [2].

A 32 year old woman, weighing 110 kg and 160 cm in height presented difficulty in swallowing, complaints of mouth, for a week. She presented swelling both in face and neck. The patient was admitted to hospital 4 days before and started antibiotics by the surgeon. The patient was diagnosed as hypertensive and diabetic. She had a tooth extraction a few days ago.Although having the antibiotheraphy swelling and edema worsened. She was not able to lie down supine due to the difficulty in breathing. On examination, heart rate was 130 beats/min and blood pressure 160/90 mm of Hg oxygen saturation 78%. The swelling was diffuse extending from face to the anterior aspect of the neck to the manubrium sternum (Figures 1 and 2). On airway examination mouth opening was limited to 2 cm. Neck extension was painful and limited also. She was in toxic apperance. Her fasting blood sugar 270 mg/dl. She was scheduled for emergency drainage of the abscess. Tracheostomy was planned under sedation . The procedure and the need for tracheostomy was explained to the patient and written informed consent was obtained. In the operating theater, electrocardiography, noninvasive blood pressure, and pulse oximetry were monitored. 100 mcg fentanyl was administered. Dexmetedotimidin infusion at a rate of 0.7 mg/kg was started for sedation. 8 mgr i.v dexamethasone administered. She was maintaning a saturation of 90% with nasal oxygen. Surgical tracheostomy under local anesthesia was performed.Vitals were within normal limits.She was transferred to the ward (Figure 3). 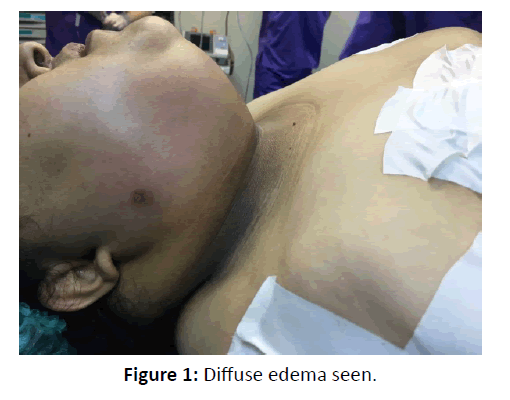 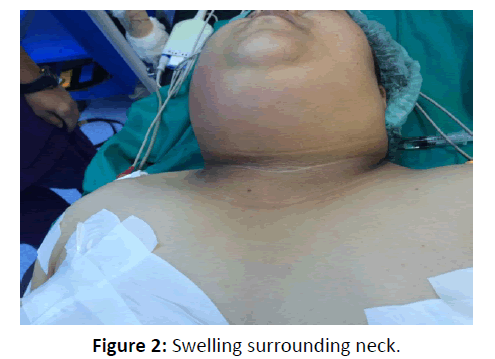 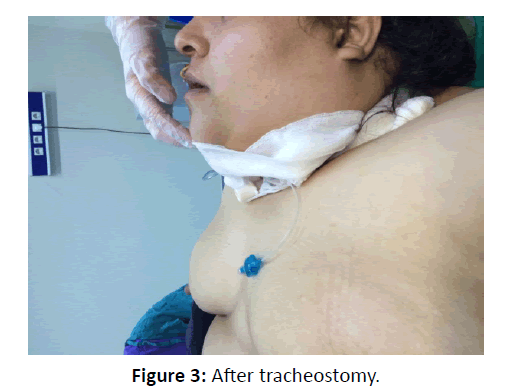 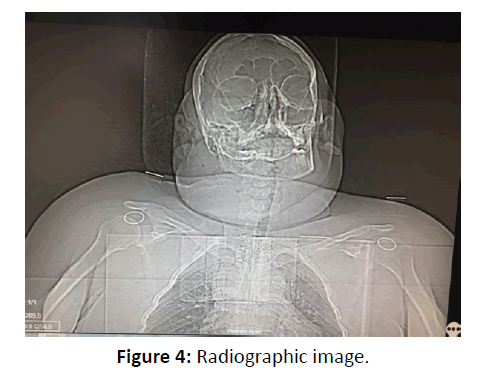 Described by Ludwig and Grodinsky Ludwig’s angina is cellulitic infection following dental extraction or dental abscess. The infection spreads from the roots of second and third molars to the submandibular and to the sublingual space. Consequently involves the retropharyngeal area [3].

In our patient, there appeared an extreme situation. The swelling and oedema limited neck movements, minimal openness of mouth required surgical manuplation which was managed with optimal analgesia.Tracheostomy is the last resort but in our patient she had already progressed to the stage the symptoms of airway ostruction.

Sujatha and friends reported a 35 year male patient presenting a swelling since five days following the dental infection. They performed fibreoptic intubation awakely. Nasal fibreoptic bronchoscopy was performed laterally with local anesthesia [4]. In our case we didn’t think of this choice due to the intraoral rupture of abscess associated with the risk of aspiration. Our patient had desaturated to 70% by which time tracheostomy was secured (Figure 4).

Blind nasal intubation besides have a failure rate.It can cause bleeding, laryngospasms, a?rway edema, and aspiration of the abscess [5]. Limited mouth opening makes the laryngoscopy difficult and masking the patient after inducing the general anesthesia can lead to the intubation impossible [6].

Ramesh and his collegues reported a 25 year old male patient with diffuse Ludwig’s angina.On physical examination he had respiratory distress and toxic in apperance. His mouth opening was limited to 1.5 cm .They planned elective tracheostomy under local anesthesia. Abcess was drained under general right after the procedure. The tracheostomy tube care was taken in the postoperative period and the skin was strapped on the fifth postoperative day and recovered [7].

Intraveous dexamethasone can be used to reduce the edema. Here we used 8 mgr dexamethasone preoperatively. Tracheostomy also could be impossible in advanced cases but we had no difficulty in procedure.

With the distorted anatomy, diffuse abcess awake tracheostomy under topical anesthesia with sedation and optimal analgesia is a succesfull option. The choice of the airway management depends on the judgement and the experience of physician in charge.