Aim of this study is the easy and low-cost classification of basic hand grasp motions. For this aim, two sEMG sensors were placed on the forearm muscles. The reason is that to place the sensors on two forearm muscles is a low-cost and easy method. Also these forearm muscles are related with grasp motions. At first stage of the study, feature extraction methods were applied to the energy values of two channel signals. The feature extraction methods used at first stage were the filtering and histogram calculation. Then, the relations (correlations) between the histogram values were calculated by concordance correlation method. Finally, the concordance correlation values were used to classifier as input. The cascaded-structure classifier was used to obtain best results. According to the classification results, the average success rate calculated as 94.72%. Based on this high success rate, the method used in the study is proposed to some medical decisions, such as detection of muscle disorders or graspmuscle relation.

In these studies, two main measurement sources (muscle regions) are used to obtain electrical signals using sEMG device. These regions are named as the hand and forearm muscles. But the forearm muscles are preferred rather than the hand muscles [15]. The reason for this preference is the forearm muscles are stationary at required level while the hand muscles are moving during the grasp motions [16,17]. As a result of this problem, the hand muscle movements make the electrode placement difficult and require the special electrodes. Therefore, to place sEMG electrodes (sensors) on the hand muscles is not a low-cost and simple way. In addition, studies in the literature have preferred the forearm muscle measurements because of the based on the production of prosthesis. As mentioned above, results of the studies in the literature are still lacking in terms of easy-to-use and low-cost. Also the priorities of them are not support the medical decisions. Furthermore, there are very few studies related with grasp motions. As a result of these shortcomings, current study aims the low-cost and easy-to-use classification method for the grasp motions by using 2-channel simple sEMG system. Also the current study aims to develop an accurate sEMG-based sensing system by describing methods to reduce the recognition error.

In the first phase of the study, the number and placement of electrodes were determined. Electrodes were placed on the forearm muscles on the basis of the studies in literature and the purpose of current study. The number of electrodes chosen was 2, to support the low-cost and easy-to-use terms. Also, at least two electrodes are needed to measure the correlation between two different muscles. In the second phase of the study, the aim was to increase the success rate. Therefore the feature extraction processes were performed in the time domain.

The hardware used was an NI analog/digital conversion card NI USB- 009, mounted on a PC. The signals were taken from two differential EMG sensors. The signals were transmitted to a 2-channel EMG system by Delsys Bagnoli, Handheld EMG Systems. Electrodes used are Delsys Trigno Mini Sensors (Dimension of each electrode is 25 × 12 × 7 mm). This type of electrode is designed for use in the treatment and diagnosis of disease. Sampling rate of data was 500 Hz. The signals were band-pass filtered using a Butterworth Band Pass Filter. The low and high cut-off frequency was 15 Hz and 500 Hz respectively. Also, a notch filter at 50 Hz was used to eliminate line interference artefacts. Surface EMG electrodes were placed on the two forearm muscles (Flexor Capri Ulnaris, Extensor Capri Radialis Longus and Brevis). Essentially, these muscles are for the wrist bending. But grasp motions affect enough these muscles [18]. Reference electrodes were in the middle. Electrodes were held in place by elastic bands. Electrode placement muscles can be seen in Figure 1. 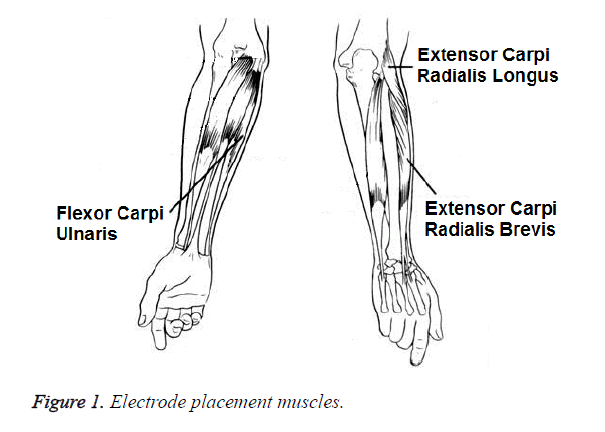 Data were obtained from 5 healthy subjects (two males and three females). Subjects were the same age approximately (20 to 22-year-old). 6 hand movements (grasp motions) were asked to each of subjects. The measured time of each grasp motion was 6 second. Each subject has repeated the same grasp motion 30 times. Thus 180 × 3000 data matrix was created for each subject. The data used in this study can be downloaded from the UCI database [19]. Grasp motions can be seen in Figure 2. 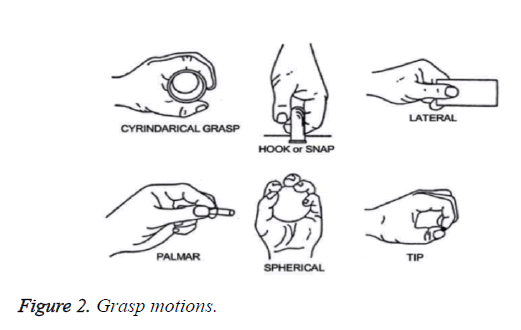 The sliding time-window approach was applied, to analyse only the muscles contraction segment. Sliding window time was 40 ms. and the average value was calculated for each sliding window. Samples were analysed if average value exceeds the threshold in each window. The threshold value was set equal to 10 in this study. In other definition, if sEMG signals exceed the threshold value the muscle considered no longer in a resting phase.

Figure 3. Block diagram of method used in this study.

A histogram is a graphical representation of data series. Data series are divided into equal intervals between the maximum and minimum values. Then the number of value in each interval is calculated. Histogram graph has two axes. These axes are the divided-intervals and the number of data in each interval [20]. Energy values in current study were divided into 250 equal intervals. Maximum of the energy values was selected as 25 mW. Minimum of the energy values was selected as 0 W. The reason for this choice is the EMG amplitudes are in -5, +5 mV interval. Thus, energy values change between 0-25 mW.

While is the number of samples and is a sample.

where μx and μy are the means of the two variables, respectively. μx has the same formula as μy that is given by:

Where σx and σy are the variances of the two variables, respectively σy has the same formula as σx that is given by:

Well-known hierarchical divisive classifier was used to do this task in first level of classifier of current study [22]. Thus, three class was created in first level of cascade classifier. Then in second level, new classification was made between classes obtained in the first level. In the second level, k-means method was used to determine the separability degree of classes from each other. K-means method is very useful and well known method. Logic of K-means method is as follows: K-means method selects random cluster centres. Groups the elements according to their proximity to the centres selected first. Then, according to the centre of the new group makes the same process again. It stops iterations when the positions of the centres are fixed [23]. With this method, the relevant motions were determined in first level. Implementation of the cascade classification method used in current study, can be seen in Figure 4. 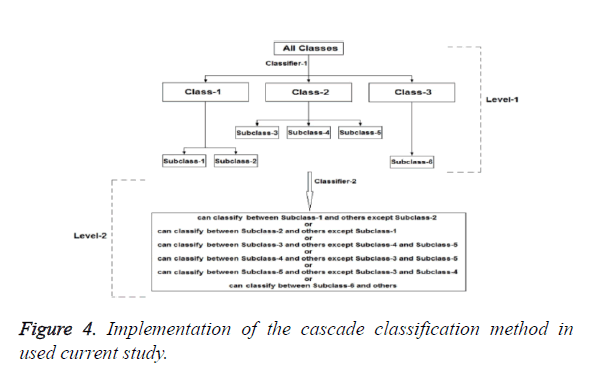 Furthermore, the Cross-Validation was also used. 90% of data was used as train set and 10% was used as test set in each cycle. Totally 10 cycle was used.

Histograms of the energy values measured from each channel, were calculated to achieve the result in this study. Histogram graphs of energy values can be seen in Figure 5. 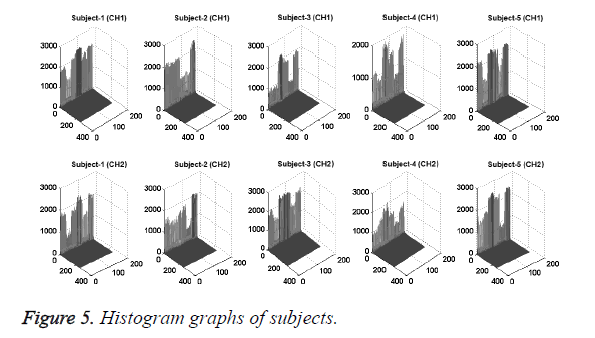 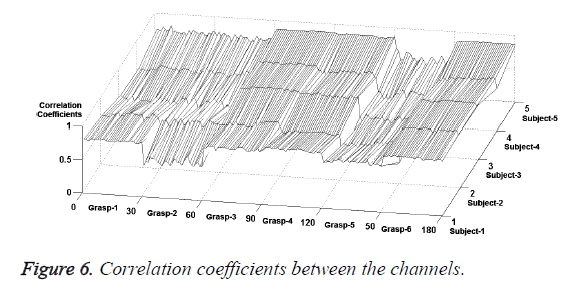 Figure 6. Correlation coefficients between the channels.

As shown in Figure 6, grasp-3, grasp-4 and grasp-6 are interrelated. Also grasp-1 and grasp-2 are interrelated again. Furthermore grasp-5 is different from others. In other words, there are three classes. First level of cascade classification was applied to verify these three classes. All histogram values were the inputs of divisive hierarchical classifier in first level of cascade classifier. Created classes that are the result of hierarchical classification can be seen in Figure 7. 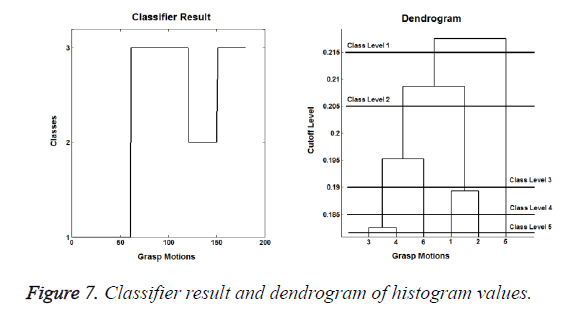 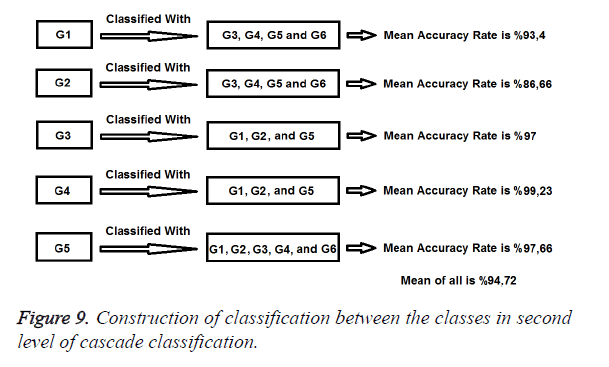 For example, mean accuracy rate of classification of the G1 with G6, G2 with G4 and G3 with G5 is 97%. In addition, classification result can mean the high relation between the grasp motions and forearm muscles. From another perspective, similar and different grasp motions can be distinguished by this high classification result. Furthermore, whether the motions and muscles are healthy or not can be determined in comparison with results of classification between the similar motions. In addition, it should be note that the measurements in this study were stationary. Accordingly, the proposed method may fail in non-stationary measurement. So, again stationary signals should be used for diagnostic purposes.