Apoptosis plays an important role in degeneration of Nucleus Pulposus (NP) cells. L-Monomethyl- Arginine (L-NMMA) is an analogue of L-arginine and can be inactivated irreversibly by induced NOS (iNOS). L-NMMA can also compete with L-arginine for binding sites on iNOS molecules. In addition, LNMMA has been reported to influence the apoptosis of hyaline cartilage cells in vitro. Thus, we hypothesized that L-NMMA would influence the apoptosis of NP cells in vitro. Rabbit primary NP cells were cultured and subjected to flow cytometry to determine the levels of apoptosis in each group at each time point. Western blotting was performed to detect the Bcl-2/Bax ratio, as well as protein levels of caspase-3 and caspase-9. A significant increase in apoptosis was observed between the NP cells cultured with 1% FBS medium with versus without L-NMMA (P<0.01). Likewise, the Bcl-2/Bax ratio was also increased in NP cells cultured in 1% FBS with L-NMMA, versus those cultured without L-NMMA (P<0.05). Meanwhile, the activity levels of both caspase-3 and caspase-9 were reduced in the presence of L-NMMA, compared with levels observed in the absence of L-NMMA (P<0.01). This study showed that L-NMMA treatment delayed the senescence and apoptosis of NP cells in vitro, raising the possibility that L-NMMA may be a novel treatment to delay intervertebral disc degeneration.

The main clinical manifestation of degenerative disc disease includes severe pain in the back, neck, and shoulder. This pain has a relatively large impact on human spine function and can negatively affect both bones and organs [1]. To date, the exact pathogenesis of intervertebral disc degeneration remains elusive. Accumulating evidence suggests that Nitric Oxide (NO) may play a physiological role in neuronal signal transmission, and it is also involved in various disease processes [2,3]. Nitric Oxide (NO) was initially discovered as an endothelium-derived relaxing factor that contributes to regulating vascular tone. NO is formed from the amino acid precursor, L-arginine, by Nitric Oxide Synthase (NOS) [4]. Elevated NO production has been shown to play an important role in the pathogenesis of neural diseases such as Alzheimer’s, and excess levels of NO have been detected in the Cerebrospinal Fluid (CSF) of patients with degenerative lumbar disease compared with pain-free control patients [4-6].

The Nucleus Pulposus (NP) performs several critical functions, one of which is ensuring that compressive loads are evenly distributed and transferred between the vertebral bodies of intervertebral discs [7]. Intervertebral disc degeneration is characterized by a cascade of cellular, biochemical, and structural changes. This cascade begins in the central NP where decreasing proteoglycan content and an associated reduction in hydrostatic pressure impair the function of the NP, thereby leading to back pain [8,9]. NP cells only represent approximately 1% of the entire intervertebral disc tissue, yet they play an essential role in resisting mechanical loadings by synthesizing an Extracellular Matrix (ECM) to maintain the stability of intervertebral discs. The synthesized ECM also mediates an important protective effect on disc integrity [10,11]. Correspondingly, the loss of NP cells has been reported to closely correlate with the onset of intervertebral disc degeneration [12].

Numerous studies have revealed that NP cells may be induced to produce NO in response to certain stimuli [13,14]. In a study of chondrocytes by Maneiro et al., NO was found to activate mitochondria-dependent events and to induce mitochondrial pathways involved in mediating apoptosis [15]. For NP cells, recent studies have demonstrated that apoptosis plays an important role in their degeneration [16,17]. L-Monomethyl- Arginine (L-NMMA) is an analogue of L-arginine and can irreversibly inactivate induced NOS (iNOS) by competing with L-arginine for binding sites on iNOS molecules. This inactivation results in significantly lower levels of NO production and an inhibition of apoptosis. We hypothesize that NO-mediated apoptosis plays a critical role in the loss of NP cells in intervertebral disc degeneration. To test this hypothesis, primary NP cells were isolated and NO production was inhibited by L-NMMA to investigate the effects of NO on serum-induced apoptosis in NP cells cultured in vitro, and to study the mechanism(s) involved.

Isolation and culturing of NP cells

Twelve New Zealand white rabbits, independent of gender (weight 3 ± 0.5 kg), were anesthetized and sacrificed for the resection of lumber discs 1 through 4 under sterile conditions. The NP of each disc was removed and rinsed in D-Hank’s solution. Then the NP tissues were cut into small pieces with ophthalmology scissors and were digested with trypsin (0.25%) for 15 min. The resulting cell suspension was washed with Dhank’s solution, and then was re-suspended in 2 ml crude collagenase medium and DMEM containing Fetal Bovine Serum (FBS) (20%). After a centrifugation step to pellet the cells, the collagenase medium was removed and the cells were carefully washed with D-Hank’s solution. After a final centrifugation step, the cells were re-suspended in DMEM in flasks at a concentration of 2 × 104 cells/cm2. The cells were cultured to obtain a confluent monolayer before establishing the experimental treatment groups. To characterize the cells obtained, staining with toluidine blue and immunocytochemistry (ICC) to detect type II collagen were performed. Regarding the latter, an anti-collagen II antibody, ALP (C-8) was used in conjunction with goat anti-mouse and goat anti-rabbit secondary antibodies (Ye Lei Biotechnology Co., Ltd., Guangzhou, China). This study was approved by the Central South University Institutional Review Board (no. 201512136).

Characterization of apoptosis and caspase activity

Immunoblot detection of Bcl-2 and Bax

Primary NP cells (monolayer primary cultures established with cells isolated from rabbit intervertebral discs) had a small, round morphology, exhibited strong refraction, and were slow to affix to the container wall when suspended in culture medium (Figure 1A). After 2-3 d in culture, the cells were predominantly elliptical or small and round in shape with large nuclei and small cell volumes; they were scattered or distributed in sheets, exhibited some refraction, and had reached 20-30% confluence (Figure 1B). After 5-7 d in culture, cell confluence had increased to about 40% and a majority of the cells were fusiform in morphology with a protruding appearance, a round central nucleus, and one or two nucleoli, though some cells remained round or oval (Figures 1C and 1D). After the cells had been in culture for 10 d, cell confluence had reached 60-70%, the cells had abundant cytoplasm, and they were mainly triangular, spindled, or small and round in shape (Figure 1E), which indicated that postpassage cell morphology could be used in downstream tests. After passage, the cells grew rapidly and exhibited complete adherence much faster (~3d) than the original-generation cells, but they had intracellular vacuoles. In the second generation after passage, signs of aging were apparent, with ~80% of the cells taking on long shuttle morphology (Figure 1F). 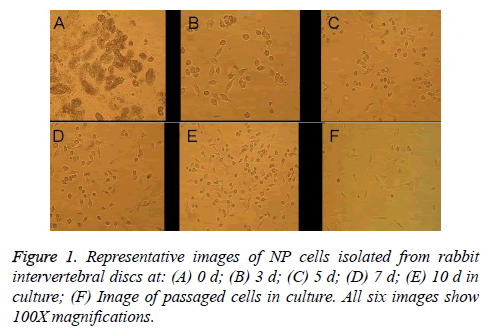 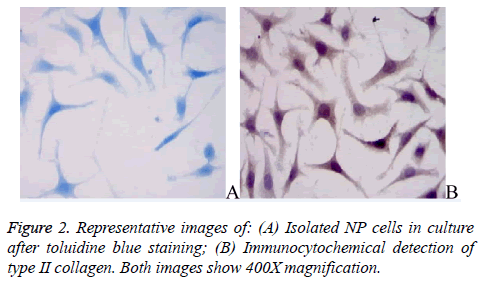 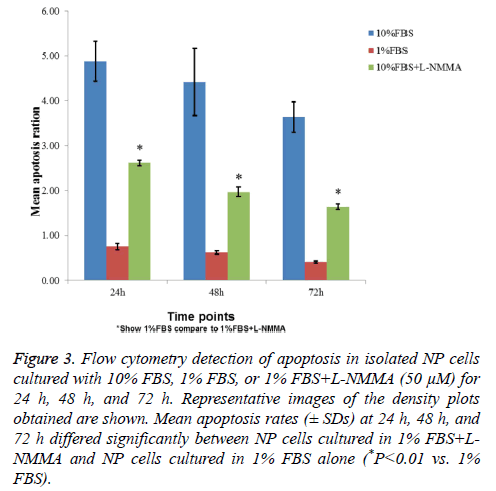 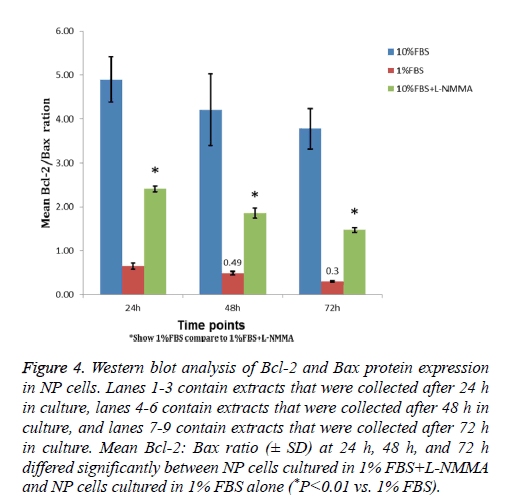 Caspase-3 and caspase-9 activity levels per mg of caspase protein in NP cells cultured in 1% FBS were significantly greater than the levels observed for NP cells cultured in 10% FBS after 24 h, 48 h, and 72 h of culturing (P<0.01). However, the activity levels of both caspase-3 and caspase-9 were significantly decreased at each time point when 50 μM LNMMA was added to 1% FBS cultures (all P<0.01; Figures 5A and 5B). 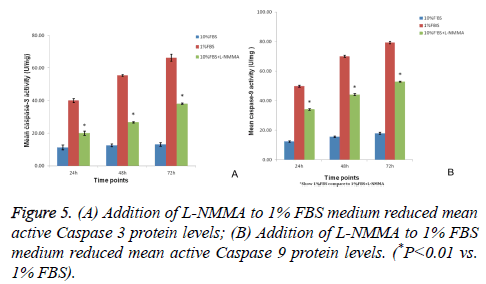 Compared with other in vitro cell cultures, the culturing of NP cells is relatively difficult. Existing disc cell culture methods include organized block culture and enzymatic digestion [21-23]. For the former method, a longer adherent time is needed and the obtained cell number is limited. Cells have been isolated more thoroughly with enzyme digestion, and this method was successfully applied to the isolation and culturing of NP cells in the present study. Phenotypically, cartilage cells and NP cells are very similar and they both secrete proteoglycans and type II collagen [24,25]. Therefore, in the present study, ICC detection of type II collagen and staining of proteoglycans were performed to determine the purity of the primary NP cells that were isolated. Positive staining of the cultured NP cells with toluidine blue revealed that the isolated cells were metachromatic and they had the capacity to synthesize proteoglycans [26,27]. Detection of type II collagen further confirmed that the cultured cells were NP cells [26,27].

After obtaining the isolated NP cells, L-NMMA was administered to investigate apoptosis induced by serum starvation. L-NMMA is a congener of L-arginine and has been used as an inhibitor of NO production based on its ability to compete with NOS for L-arginine. The present results show that L-NMMA can rescue serum starvation-induced apoptosis in NP cells and NO plays an important role in the apoptosis of NP cells.

The Bax gene, located in human chromosome 19, is one of the most important genes in the Bcl-2 gene family and it promotes apoptosis. Bax and Bcl-2 can form heterodimers or homodimers, and only the combination of Bcl-2 and Bax mediates anti-apoptotic effects. Furthermore, it has been confirmed that the Bcl-2/Bax ratio negatively correlates with apoptosis [28-30]. In the present study, L-NMMA treatment of serum starved NP cells led to a significant rescue of the decrease in the Bcl-2/Bax ratio due to serum starvation, thereby confirming that NO is involved in mediating apoptosis in NP cells, and it mediates this effect, in part, by regulating the Bcl-2/Bax ratio.

Caspases contribute to a variety of important biological functions during apoptosis, including the initiation, regulation, and enforcement of this process. However, in recent years, correlation study results have also shown that caspases have important roles in cell differentiation as well [31,32]. Studies of the osteoblast differentiation process have showed that excessive activation and expression of caspases are involved in the induction of differentiation of MC3T3-E1 bone cells by Bone Morphogenetic Protein (BMP)-4, while apoptotic or necrotic cells were not observed [25,31,32]. Specific inhibitors of caspases 2, 3, and 8, as well as a broad-spectrum caspase inhibitor, have also been shown to inhibit the biological activity of alkaline phosphatase. In addition, parathyroid hormone levels were found to correlate with cAMP expression levels in MC3T3-E1 cells treated with BMP4, thereby revealing a possible mechanism for the observed inhibition of osteoblast function. Thus, caspase-3 appears to play a very crucial role in maintaining gene expression in osteoblasts.

NO generated by endogenous NOS enzymes or NO donors have been found to promote or prevent apoptosis induced by diverse pro-apoptotic stimuli in cell culture models [35]. In general, low doses of NO production mediate a protective effect in apoptosis, while high doses of NO production promote apoptosis. Both mitochondrial-dependent and mitochondrial-independent apoptotic signaling pathways are involved in mediating this dichotomous cellular response to NO and the molecular mechanisms responsible for these effects are complex [36]. Elevated levels of NO can induce apoptosis by mediating oxidative stress, by interfering with energy metabolism, by directly damaging DNA, by activating poly-ADP polymerase, or by inducing Ca2+ disorder [35]. In the present study, inhibition of NO production by L-NMMA in NP cells led to a marked inhibition of the decrease in the Bcl-2/Bax ratio induced by serum starvation. Increases in capase-3 and caspase-9 expression levels were also inhibited. Taken together, these results clearly indicate that NO regulates the expression of apoptotic proteins involved in mediating the apoptosis process in NP cells. However, the exact mechanism by which NO regulates the Bcl/Bax ratio and the expression levels of certain caspases remains to be elucidated.

In conclusion, the isolation and treatment of primary NP cells with L-NMMA was performed to inhibit NO production and to investigate the effects of NO, and the associated mechanism(s), on serum-induced apoptosis in NP cells cultured in vitro. When NO production was inhibited by L-NMMA, serum starvationinduced apoptosis was delayed in NP cells, concomitant with blocking of the decrease in the Bcl-2/Bax ratio and increased expression levels of caspase-3 and caspase-9. Thus, inhibition of apoptosis by NP cells may represent a novel treatment approach for delaying intervertebral disc degeneration.

This research was funded by Qingyuan People’s Hospital.

The authors have no conflicts of interest.