Psoriasis as a systemic inflammatory disease may be associated with some liver dysfunctions. We conducted a seven-year retrospective study focusing on the detailed indexes of liver functions and searching for some differences among different types of psoriasis. We investigated the liver functions and medical records of first-time hospitalization inpatients (n=211) with psoriasis including serum Alanine Aminotransferase (ALT), Aspartate Aminotransferase (AST), Lactate Dehydrogenase (LDH), Alkaline Phosphatase (ALP), Gamma Glutamyl Transpeptidase (GGT), Total Bilirubin (TBIL), Indirect Bilirubin (IBIL), Direct Bilirubin (DBIL), Total Protein (TP), Albumin (ALB) and Globulin (GLB). We also analysed the correlation between serum TP, ALB values and hospital stays. We found 123 moderate-to-severe Psoriasis vulgaris (PV) had high incidence rates of liver damage including abnormal ALT, GGT, and GLB, which had no significant differences compared with 55 Erythrodermic Psoriasis (EP) and 33 Generalized Pustular Psoriasis (GPP). PV had high abnormality rates of TP and ALB, however, the abnormality rate of ALB of PV was clearly lower than that of EP and GPP. EP had clearly higher LDH values and significantly lower TBIL, IBIL, TP and ALB compared with PV. GPP had markedly higher ALP and significantly lower TP and ALB in comparison with PV. The correlation between serum TP, ALB values and hospital stays were significantly negative. Taken together, close attention should be paid to the liver function of psoriatic patients including PV, EP and GPP. Low serum TP and ALB might increase hospital stays and economic burden of psoriatic patients.

Psoriasis is a chronic immune-mediated inflammatory disease that involves the skin, joints, or both [1]. Studies have indicated that psoriasis is frequently associated with a growing list of comorbidities such as metabolic comorbidities and cardiovascular morbidity, especially in severe cases [2-5]. The most common metabolic comorbidities were Non-Alcoholic Fatty Liver Disease (NAFLD). Patients with psoriasis and NAFLD were associated with a higher frequency of hypertension, abnormal liver function and metabolic syndrome [6]. Psoriatic inflammation result in cholangitis mostly in generalized pustular psoriasis has been reported [7]. According to these studies, psoriasis is generally considered as a systemic inflammatory disease nowadays. Liver abnormalities are common in psoriatic patients and mostly associated with drugs and NAFLD. However clinicians mostly concerned the abnormalities of EP and GPP, but ignored PV.

This retrospective study was conducted with approval from the Ethics Committee of the First Affiliated Hospital of Nanjing Medical University and in accordance with the Helsinki regulations on studies involved in the human subjects. The patient records were anonymized and de-identified prior to analysis.

We collected the inpatients with psoriasis in Department of Dermatology of the First Affiliated Hospital of Nanjing Medical University in China from July 2009 to February 2016. The inclusion criteria were first-time hospitalization with psoriasis. The data about age, gender, psoriasis type and hospital stays were collected. We mainly evaluated the detailed blood examination results of liver function on the first day of hospitalization including ALT, AST, LDH, ALP, GGT, TBIL, IBIL, DBIL, TP, ALB and GLB. We also analysed the correlation between hospital stays and each liver function index.

All statistical analyses were performed using SPSS version 22.0 software. The normal distribution of continuous variables was verified with the Kolmogorov-Smirnov test. Normal distribution data was presented as mean ± SD, and M (P25, P75) was used for non-normal distribution data. Statistical analyses included the Kruskal-Wallis H test and independentsamples T test for quantitative data, and the Pearson chi-square test for qualitative data. Linear regression was used to model the relationship between variables. P ≤ 0.05 was considered statistically significant.

From July 2009 to February 2016, 219 psoriatic inpatients in Department of Dermatology of the First Affiliated Hospital of Nanjing Medical University met with the inclusion criteria, including 123 moderate-to-severe PV (PASI>10), 55 EP, 33 GPP and 8 Psoriatic Arthritis (PsA). We did not research into PsA because of the small sample size. Some of the patients received topical or systemic treatment, however, none of them was given systemic immunosuppressive therapy within one month before hospitalization. The age and sex structure, and the ratio of smokers of PV, EP and GPP were approximate.

Sixty-seven of 211 patients were female and others were male. The age of patients ranged from 3 to 81 y old, and the average age was 54. The course of psoriasis was from 4 d to 50 y.

The comparison of liver function abnormalities among three different types of psoriasis could be seen in Table 1 and Figure 1, which showed PV had high incidence rates of liver damage including abnormal ALT (14.63%), GGT (13.82%) and GLB (19.51%), which had no significant differences compared with EP and GPP. PV also had high abnormality rates of TP (31.71%) and ALB (35.77%), however TP of PV was significantly lower than that of EP (P=0), and ALB of PV was clearly lower than that of EP and GPP (P=0 and 0.001, respectively). In addition, GPP had significantly higher abnormality rate of ALP (21.21%) in comparison with PV (P=0.001).

Table 1: The comparison of abnormality rates of PV, EP and GPP. 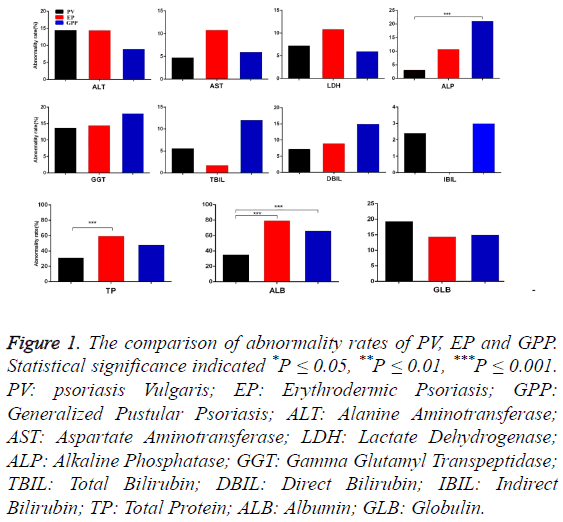 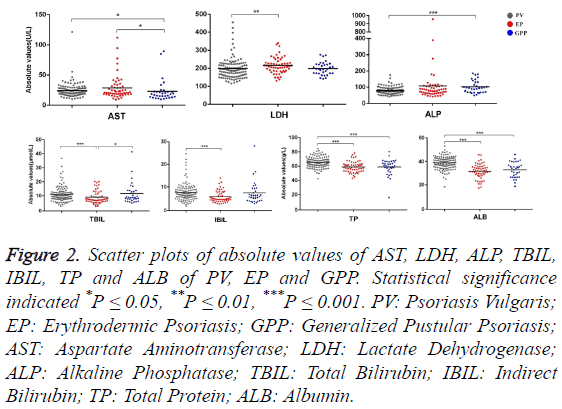 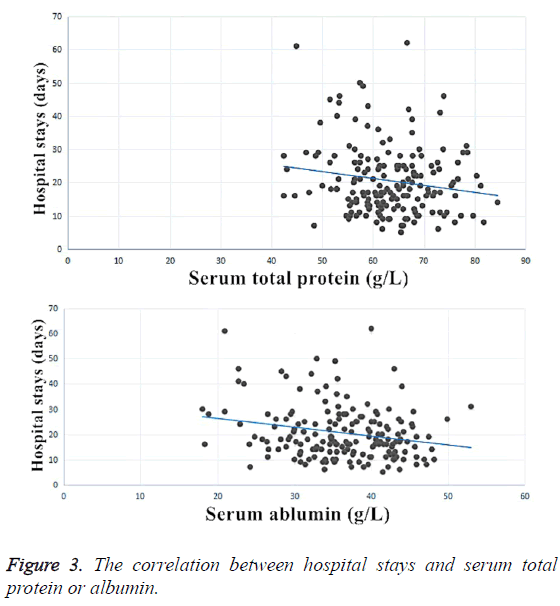 Figure 3: The correlation between hospital stays and serum total protein or albumin.

Psoriasis is a multisystem disease that affects not only skin but also many other organs and interacts with metabolic syndrome, cardiovascular disease, diabetes, psychological disorders or inflammatory bowel disease [8]. Psoriatic patients have a higher risk of liver abnormalities such as NAFLD, druginduced hepatitis, alcoholic hepatitis and neutrophilic cholangitis, than the general population [9]. In this study, we found liver dysfunction of psoriatic inpatients was common, particularly low-level serum TP (88 of 211 patients) and ALB (110 of 211 patients). Generally speaking, clinicians concerned the liver damage of EP and GPP, but not PV. It was surprising that our study showed moderate-to-severe PV had high abnormality rates of ALT, GGT and GLB, which had no significant differences compared with EP and GPP. Thus the clinicians should also pay close attention to liver function of moderate-to-severe PV.

Oxidative stress is pathologically essential to process various inflammatory diseases [10]. The oxidative stress in inflammation is one of the main pathogenesis processes in psoriasis [11]. Bilirubin, a potent antioxidant under physiological conditions, has anti-inflammatory effects by inhibiting oxidation [12]. Lower serum TBIL has a prognostic significance for worsening psoriasis vulgaris [13]. Our study showed EP had lowest TBIL among three types of psoriasis, and lower IBIL compared with moderate-to-severe PV, which indicated that the intense systemic inflammation of EP might be related to more severe oxidative stress due to low-level bilirubin, or oxidative stress led to more bilirubin depletion in EP.

However, attention should also be paid to the effects of systemic medication used before hospitalization on liver function, especially hepatotoxic medications such as methotrexate, acitretin and rarely biological agents [14]. NAFLD, chronic HBV and HCV infection are other considerations. Recent observational studies have shown that the prevalence of NAFLD is remarkably higher in psoriatic patients, and that psoriatic patients with NAFLD have more severe psoriasis than those without NAFLD [15].

A low albumin level was an indicator of nutritional status which was associated with mortality [16]. Psoriasis was severe debilitating disease with extensive desquamation and might cause severe nutrients consumption such as hypoalbumineamia and the nutrition was associated to the severity of the psoriasis [17]. We found the serum TP and ALB of psoriasis were negatively correlated with hospital stays, especially ALB. The lower TP/ALB level meant longer patients stays, which indicated potential more hospitalization costs. In addition to the direct medical costs incurred to treat the disease, inpatients may undertake some other indirect economic burden including loss of work productivity and health-related quality of life costs primarily due to an extended length of hospital stays [18,19]. Psoriasis has significant economic impact on patients, and hypoalbuminemia should be corrected actively to reduce these burdens.

The major limitation of our study is the retrospective nature. Another limitation may be that this is a single center research. In addition, the sample size of PsA was very small, so PsA was regretfully not included in this study.

In conclusion, our study evaluated the liver function abnormalities of different types of psoriasis in detail. For clinicians, the liver function of psoriatic patients, not only EP and GPP but also moderate-to-severe PV, should be paid close attention to before systemic medications, especially ambulatory treatment with potential hepatotoxicity drugs. Low serum TP and ALB might increase hospital stays and economic burden of psoriatic patients. Protein should be supplemented actively for psoriatic patients to prevent hypoalbuminemia due to extensive desquamation in most cases.

This work was supported by the National Natural Science Foundation of China (81673062) and the Priority Academic Program Development of Jiangsu Higher Education Institutions (JX10231802).

The authors have no conflict of interest to disclose.