The aim of this study was to assess lipids, lipoprotein (a) profile and HbA1c in Qatari’s type 2 diabetes mellitus (DM) and to correlate the values with various risk factors.

This is a case control study conducted during a period of May 2004 to November 2005. The study was approved by the Research Ethics Committee at the Hamad Medical Corporation in accordance with the ethical standards laid down in the Helsinki declaration.

The study included 214 consecutive Qatari type 2 diabetic patients aged 25-65 years who were referred from Primary health care clinics to the specialized diabetic unit in the Hamad General Hospital, Hamad Medical Corporation and 214 nondiabetic healthy subjects aged 25-65 years were served as controls. The diagnosis of diabetes was based on a previous history of diabetes on American Diabetes Association criteria (Expert Committee on the diagnosis and classification of Diabetes Mellitus 1997) [13]. Diabetic patients were treated by diet and /or anti diabetic drugs . A total number of 214 diabetic patients selected by a simple random process from Diabetic Clinics at the Hamad General Hospital. Impaired glucose tolerance test was performed in nondiabetic subjects so as to exclude any DM cases among the controls because DM2 is often a silent disease and it is expected to be common among middle aged population.

The subjects were interviewed by an Arabicspeaking trained nurse and all patients gave informed voluntary consent to participate in the study. Face to face interviews were based on a questionnaire that included variables such as age, sex, family history, consanguinity, physical examination, fasting plasma glucose, lipids, cholesterol total, Lp (a), HDL, LDL, triglycerides HbA1c analysis. Degree of consanguinity among the studied subjects was noted as 1st degree and 2nd degree. First degree consanguinity is defined as marriages between 1st cousins and 2nd degree is marriages between second cousins. The Height and weight were recorded and obesity was defined as body mass index (BMI) of ≥ 30 kg/m2, where BMI = Weight(kg) / Height 2 (m2). Waist to hip ratio (WHR) was calculated from measurements of the waist circumference taken at the mid point between umbilicus and xiphoid and hip circumference, at the widest point around the hips, respectively. Blood pressure was measured using mercury sphygmomanometer with subjects in a seated position. Systolic and diastolic pressures were determined at the time of the appearance and disappearance of Korotkoff sounds, respectively. Hypertension was defined according to World Health Organization (WHO) criteria as SBP > 135 mmHg and/or DBP > 85 mmHg and/or the use of antihypertensive medication [14].

Blood samples were obtained after at least a 12 hours overnight fast. Blood glycated hemoglobin (HbA1c) was measured on Roche Cobas Integra 800 automated biochemistry analyzer (Basle Switzerland). Fasting plasma glucose (FPG), total cholesterol (TC), high density lipoprotein (HDL)-cholesterol, low density lipoprotein (LDL)cholesterol, triglyceride (TG) apolipoprotein A1 (apo-A1), apolipoprotein B (Apo-B) concentrations were assessed by automated analyzer (Roch / Hitachi 917 analyzer, Roche Diagnostic). HDL cholesterol was quantified after precipitation of apoB containing lipoproteins with magnesium / phosphotungstate. LDL cholesterol was calculated by the Friedwald formula 15. The respective intra and inter assay coefficients of variation (CVs) for each of the assay were: FPG 1.4 and 2.0%, TC 1.2% and 2.1%, TG 1.5% and 3.6%, LDL-C 1.0% and 2.1%, HDL-C 2.8% and 3.5%, apo-A1 2.4% and 3.4% and Apo-B 2.9% and 3.3%. Lp (a) was quantitatively estimated in plasma by an enzymatic immunoassay (ELISA) and reagents provided by Linco Research, Inc., Missouri, USA. The intra and interassay coefficients of variations of Lp (a) were 2.7% and 5.3%, respectively.

Student-t test was used to ascertain the significance of differences between mean values of two continuous variables and confirmed by nonparametric Mann-Whitney test. Chi-square and Fisher’s exact Spearman correlation test were used an appropriate. The level p≤0.05 was considered as the cut off value for significance.

Table 1 shows the socio-demographic and clinical characteristics of the diabetic patients and non-diabetic controls. The age, male gender, BMI, obesity, WHR were higher in diabetics, (p<0.001). The prevalence of hypertension was associated with the presence of diabetes (29% for diabetics vs. 4% for control group , p<0.001). 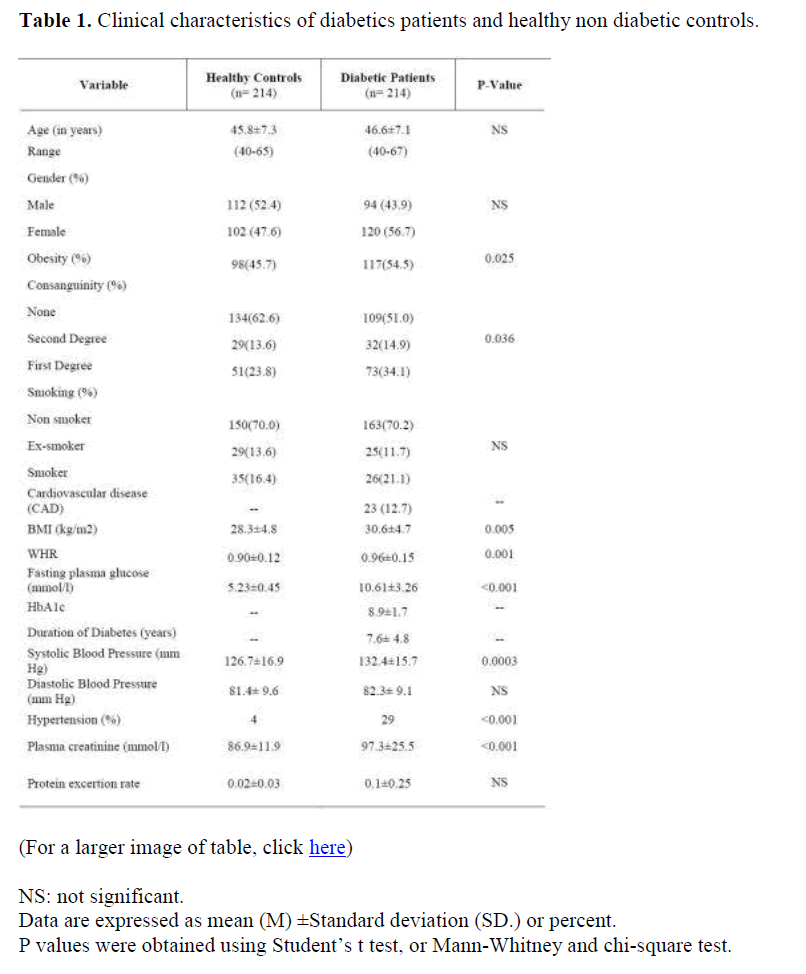 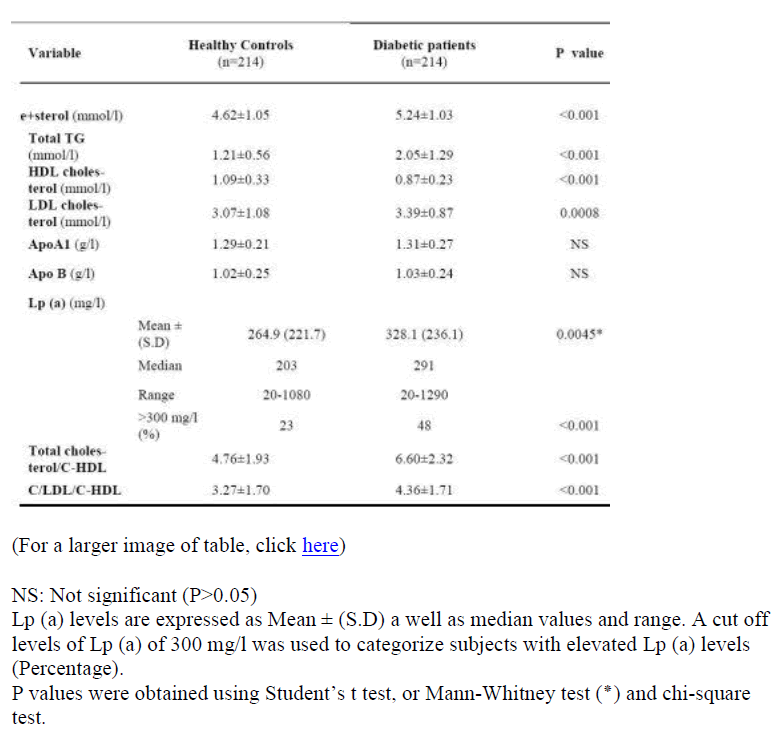 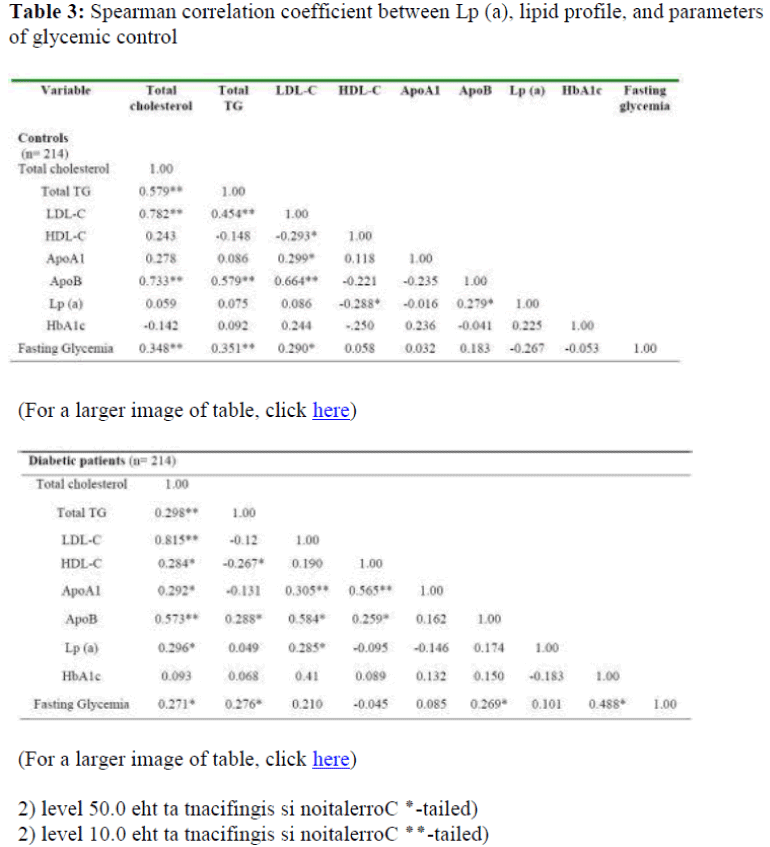 In the present study, we have confirmed previous observations of an increased LDL and HDL cholesterol levels affect on diabetic patients [3-6,9-11,14,16-18]. The importance of LDL subfractions is increasingly recognized, with an increased proportion of small dense LDL particles being correlated with an increased risk of ischemic heart disease, [6,9,10], even after controlling for age and gender [17].

Most recent studies [5,6] reported that one confounder may be the concomitant use of lipid lowering therapy as part of the intensive cardiovascular risk factor managemement. The blood pressure lowering, diet, and lifestyle advice have shown to influence lipoproteins, their effects on LDL subfractions have not been investigated in detail Although, alteration of fat intake (as part of die

This study was supported and funded by Hamad Medical Corporation Grant No. 231. We would like to thank Hamad Medical Corporation and Diabetic Association for generous support and help while this project conducted. tary/lifestyle alterations) can also result in a reduction in HDL cholesterol levels [4,9,11,17,18], a most recent study showed that dietary advice appears to be effective in bringing about modest beneficial changes in diet and cardiovascular risk factors months [4,9,16].

Changes in Lp (a) concentrations relative to diabetic control remain controversial, but most studies have failed to show any association of Lp (a) levels with glycemic control in patients with type 2 DM [6,11,17,18]. Our results showed that no strong link between either fasting glycemia or blood glucose control as assessed by HbAlc and plasma Lp (a) was found.

According to our results, there were significant correlations between Lp (a) levels and LDL-C in diabetic subjects. This result suggests that the artherogenicity of Lp (a) in diabetic men may depend on interaction of Lp (a) with environmental or other genetic factors such as LDL-C concentration [7,10,18].

In conclusion, the present study revealed that obesity, consanguinity, total cholesterol, reduced HDL cholesterol and triglyceride were more prevalent in diabetic patients and fail to show any association of Lp (a) levels with glycemic control in type 2 diabetic patients. There is a difference in the mean levels of Lp (a) between the study groups, although HbA1c did not correlate significantly with Lp (a) in subjects with or without type 2 diabetes. 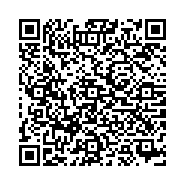