The lipid and lipoprotein profiles of 117 non-insulin-dependent diabetes mellitus (NIDDM) patients were determined in order to identify and characterize the lipid and lipoprotein abnormalities associated with Nigerian NIDDM patients. 58, age matched apparently healthy individuals served as a control group. The electrophoretic migration pattern of serum lipoproteins on cellulose acetate paper was also studied. Statistically significant increases (p<0.01) were observed in the mean values of Triglycerides, Total cholesterol, HDL-cholesterol and VLDL-cholesterol for both male and female diabetics when compared to their corresponding controls. However, there were no significant differences (p> 0.05) between the mean values of the male diabetics and nondiabetics when compared with their female counterparts. Also, there were statistically significant positive correlations between fasting blood sugar (FBS) and serum Total cholesterol levels (r = 0.4075, p < 0.0001); and FBS and HDL-cholesterol levels (r = 0.2948, p < 0.0001). No distinguishable differences in mobility and number of bands were observed in the lipoprotein electrophoresis pattern of both the diabetics and control subjects. However, electrophoresis showed increased lipoprotein fractions in the diabetics. Significant positive correlation between fasting blood sugar and lipid fractions suggest that the duration and severity of diabetes mellitus may increase the risk of atheroma.

Diabetes mellitus is a metabolic disease with abnormalities affecting all major metabolic pathways. Non-insulin-dependent diabetes mellitus as well as other non communicable diseases such as ischaemic heart disease, hypertension, and cancers are public health problems in both developed and developing countries [1]. High blood cholesterol is one of the main modifiable factors for coronary artery disease and has been rated as the greatest risk factor for cardiovascular disease [2].

Atherosclerosis has been reported as the most important cause of morbidity and mortality in long standing diabetes mellitus. The association between hypercholesterolaemia and atherosclerotic heart disease is an established fact [3]. Atherosclerosis and thrombosis produce occlusive vascular lesions in humans, which may lead to such adverse clinical conditions as stroke, myocardial infarction or peripheral vascular disease [4].

Lipid and lipoprotein levels vary widely depending on ethnic groups, genetic and environmental factors as well as severity and duration of the diabetic state in the non-insulin-dependent (NIDDM) patients [5-7]. Disturbances in lipoprotein transport and overt hyperlipidaemia are frequently encountered in NIDDM and in persons at high risk of developing diabetes, such as those with impaired glucose tolerance [8]. It is imperative that lipid abnormalities in diabetic patients be identified and treated immediately.

Although there has been a report of high serum Total and HDLcholesterol in Nigerian diabetics [9], this report is silent on Triglyceride and other lipoprotein fractions. Since there are dietary and ethnicity-based variations in lipid and lipoprotein levels and the risk of coronary artery disease [5-7], it is necessary to study these parameters in the Nigerian diabetic patients in order to establish optimal treatment for dyslipidaemia in NIDDM, especially with the report of high diabetic inpatient mortality in Nigeria [10]. This study, therefore seeks to identify and characterize the lipid and lipoprotein abnormalities associated with Nigerian diabetic (NIDDM) patients as compared to the normal nondiabetics. This will assist in achieving adequate dietary and therapeutic control of NIDDM and subsequent hyperlipidaemia in Nigerian population.

A total of 61 male and 56 female non-insulin-dependant diabetic patients attending the Diabetic Clinic of the University of Nigeria Teaching Hospital (UNTH), Enugu, Nigeria were involved in the study. Patients on insulin therapy were excluded. 30 male and 28 female, age matched apparently healthy subjects served as control groups. Informed consent was taken from all the subjects.

Five ml of venous blood was drawn from the antecubital vein of each subject after an overnight fast. 2ml of the blood was transferred into Fluoride-oxalate tube for FBS, and 3ml to plain venoject tube for lipid studies respecttively. The sera were separated by centrifugation at 3000 rpm for 5minutes and stored at 40C. All analyses were carried out within 48hours of blood collection. Samples and reagents were brought to room temperature before analysis. Electrophoresis was carried out on randomly pooled diabetic sera and control sera within 24 hours of blood collection. Commercial control serum (QCA SERISCANN, Quimica Clinica Applicada, S. A, Spain) was included in each assay batch to evaluate the assay method and reproducibility. 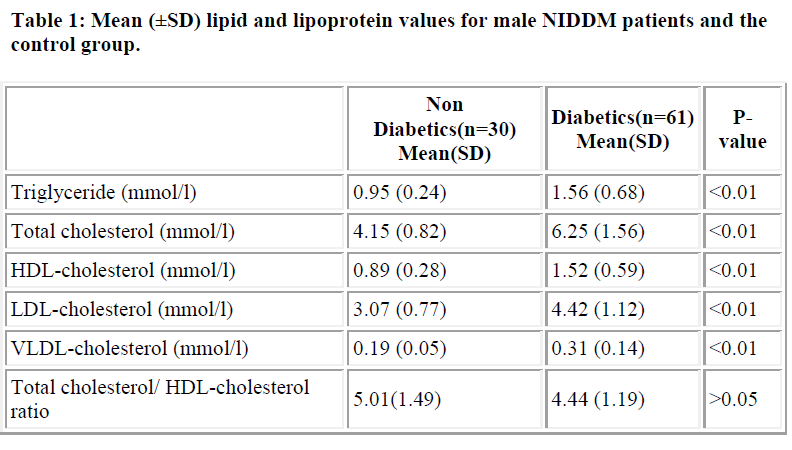 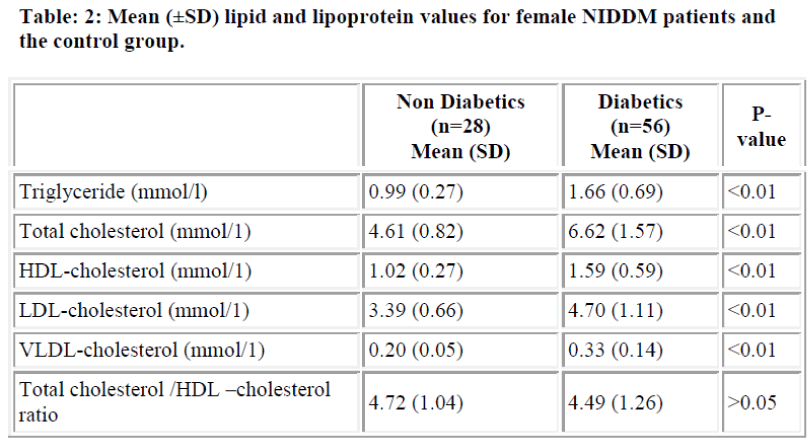 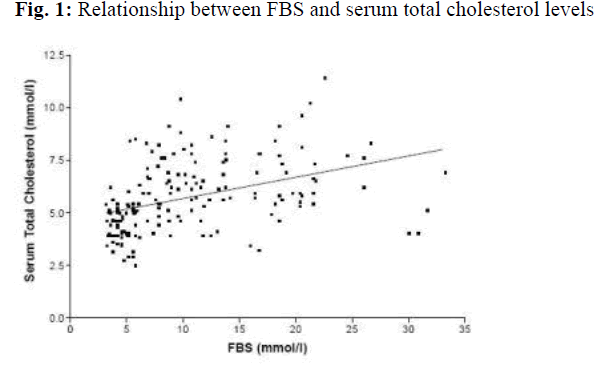 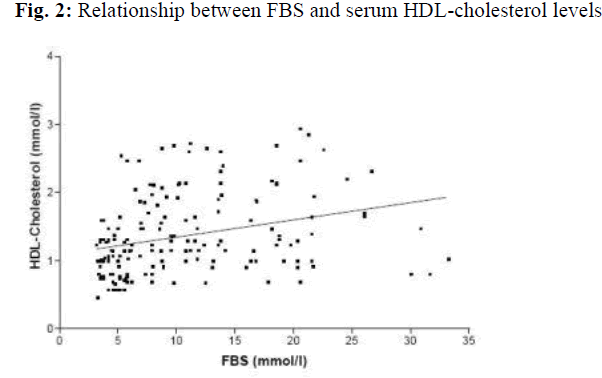 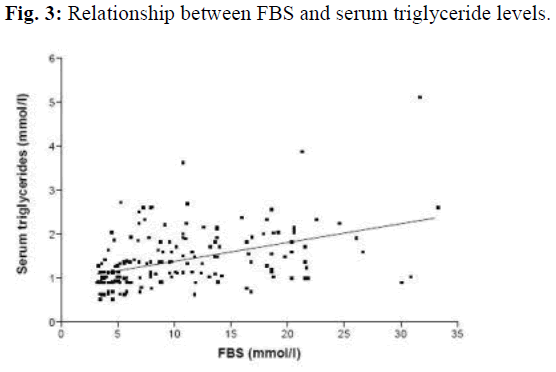 Lipid and lipoprotein abnormalities are common in the diabetic population due to the effects of insulin deficiency and insulin resistance on key metabolic enzymes [18]. Glucose tolerance, insulin resistance and plasma insulin levels have been implicated in abnormal plasma lipoprotein levels [19,20] and hyper insulinaemia has been linked with the development of atherosclerotic vascular complications especially in the diabetic male patients [21-23]. Cholesterol metabolism, especially in association with specific plasma lipoproteins, influence the development of atherosclerosis in humans [24]. An increased cardio vascular risk in diabetic patients attributed to qualitative and quantitative changes in lipoprotein transport and overt hyperlipidaemia are frequently encountered in NIDDM [25].

Cholesterol concentrations have been classified on the basis of relative risk to health irrespective of age or sex [26]. Levels above 5.20mmol/L and 3.36mmol/L for Total cholesterol and LDLcholesterol respectively, have been classified to be risky to health while values above 6.20 and 4.14mmol/L are of very high risk. The mean values obtained in this study (Tables 1 and 2) show that both male and female Nigerian NIDDM patients are at risk for atheroma diseases unlike the control subjects. This indicates a possible outbreak of atherosclerosis amongst the Nigerian NIDDM patients and suggests that their lipid profile should be critically monitored, and adequate dietary and therapeutic control measures be instituted. Similar reports recorded in this study were made by El-Hazmy and Warsy [27] and Laakso, et al [28] in Saudi Arabia and Finland respectively. Their reports however differ from the present findings in that the HDL-cholesterol level in the Finnish diabetics [28] were markedly reduced when compared with the results of the present study. Furthermore, Onyemelukwe and Stafford [29] reported a low level blood HDL-cholesterol but stated that this is not in itself an indicator of atheroma since the distribution of cholesterol between the lipoprotein classes is not disturbed if the Total cholesterol is also low. Increased fasting Triglyceride levels seen in this study confirms the fact that relative hypertriglyceridaemia (but not cholesterol) is often seen in Type 2 diabetic patients [30].

There was a significant positive linear correlation between FBS and Serum Total-cholesterol, HDL-cholesterol and Triglycerides (figures 1-3). This is in agreement with the reports of El- Hazmy and Warsy [27], and Hague [31] that longstanding hyperglycaemia rather than blood glucose level is broadly related to the diabetic complications seen in the diabetics. It was not possible to confirm this since hyperglycaemic duration was not established in this study, as most of the patients have been diabetic for a long time without knowing. They only sought medical attention when their conditions worsened. However the positive linear relationship obtained seems to suggest that the duration and severity of diabetes mellitus may increase the risk of atheroma disease.

There was no distinguishable difference in the lipoprotein electrophoresis pattern (Fig. 4) of the diabetics (a and d) when compared to the nondiabetics (b and c) in terms of number of bands and mobility. However, a and d both show more intensely stained and broader fractions confirming higher concentration of the lipid fractions in the diabetics. Although high levels of serum cholesterol and Triglycerides are well recognised risk factors for Ischaemic heart disease, a lower incidence has been observed in Africans than in the Caucasians (including in the diabetics) [5]. The present study shows that although serum Total cholesterol and Triglycerides are increased in the Nigerian NIDDM patients when compared with the control group, the values are still lower than that obtained in caucasians.

However, the levels are higher than the recommended level by National Cholesterol Treatment Panel [14]. This indicates that the diabetics are at increased risk for atheroma disease than the non – diabetics. It is therefore advocated that adequate and optimal dietary and therapeutic control measures be implemented to obviate the risk of coronary artery disease in these patients.

We wish to thank the Head and the entire staff of the Diabetic Clinic, University of Nigeria Teaching Hospital, Enugu for allowing us to use their patients for this study. Also, we are grateful to all the patients who participated in this study.