The aim of this work is to monitor essential metals Ca, Cu, Fe, Mg, Ni and Zn, and xenobi-otic environmental metals As, Cd and Pb in hair of young boys. It is a strategic choice that could allow a preliminary study for a synergistic assessment of the possible relationships among diet and environmental local pollution in students of 12 - 13 years old, living in dif-ferent cities of Salerno province with different grade of urban and industrial development and the presence of water pollution (Sarno river and its tributaries) (Figure 1). It’s known that the age and sex samples, for their growth physiological features, are suited to this study. The experimental data, reported in table and compared to reference data, showed signifi-cant ponderal difference in metal levels between the samples collected by sex. Concentration of the above-mentioned elements were determined by means of atomic absorption spec-trometry after a washing procedure following a mineralization in a microwave digestion sys-tem. Particularly the arithmetic mean value of concentrations of lead in hairs of schoolboys of “Salerno” and “Solimena” secondary schools, were 1.50 g/g and 1.44 g/g; moreover “Solimena” schoolboys present a value of nickel (2.79 g/g) highest in comparison with other sampling sites; at last “Scafati” secondary school children’s hairs have a unsafe con-centration of arsenic (2.47 μg/g). Two-way ANOVA demonstrates a significant interaction between sampling site and sex on hair arsenic and nickel levels (P=0.013 and P=0.014 re-spectively) as well as a significant effect of sex and sampling site on cadmium, calcium, cop-per, lead and magnesium levels (P<0.05). The results support the hypothesis that hair metals levels can be considered an indicator of different relative exposure of populations to essen-tial and toxic metals pollution.

The impact of environmental exposure to toxic metals on human health has been discussed in numerous publications over the past 20 years, especially with respect to lead and cadmium [1-12]. Evaluation of the toxic effects of Cd and Pb on people living in polluted areas is based mainly on analysis of the concentrations of those metals in blood and urine and the accompanying biological effects [1-12].

Hair can accumulates not only toxic metals such as As, Cd and Pb but also essential metals such as Ca, Cu, Fe, Mg, Ni and Zn can be taken into consideration when evaluating environmental pollution [1-12].

The Province of Salerno is a province in the Campania region of Italy. The selected area, “Agro Nocerino Sarnese” catchment basin, has cities with different grade of urban development, and is characterized by an high concentration of high environmental impacting industrial activities, a high concentration of urban settlement and vehicular traffic and the presence of water pollution (Sarno river and its tributaries) [1-12]. (ISTAT: Tables 1,2,3,4) 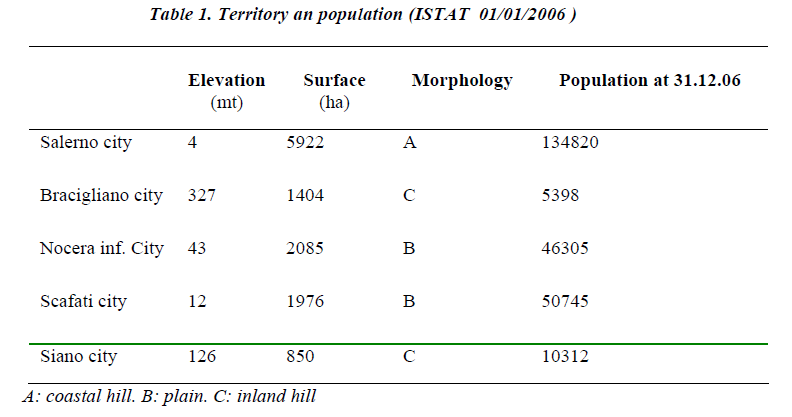 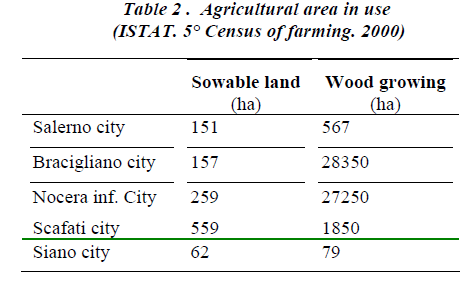 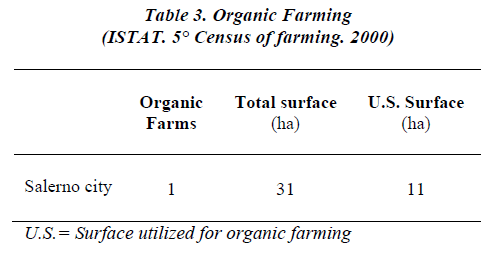 Hair samples have been collected from 200 young stu-dents aged between 12 and 13 years old. They live in five different towns of Salerno province (Italy) with different urban and pollution condition. The presence of motorways with high atmospheric air pollution, a wide conventional agricultural system, the toxicity of Sarno river and its affluents, often utilized to irrigate the crops, artisanal and food industries using chemical product, are the principal sources of pollution, which increase the content of heavy metals in the air-water-soil system.

From 200 adolescents, about 0.5 g hair samples were cut by plastic scissors from an area close to the occipital region of the scalp and only the first 3÷3.5 cm were used for analysis. The samples were stored in separate tightly sealed plastic envelope. These studies were conducted in accordance with national and institutional guidelines for the protection of human subjects and animal welfare.

It is well-known that the washing stage is one of the most critical steps in this analysis, because there are different washing procedure without general agreement. Different detergent or organic solvent have been investigated for their efficiency in removing exogenous metals from hair samples. Hair samples were washed following the recommendations of the International Atomic Energy Agency (IAEA) Advisory Group.

They were washed, by chemical shaking, three times with acetone, then with the deionised water and again with acetone. After drying at 105°C for 2 h, they were digested with 5 ml of HNO3 65% (ultrapure Merck) : H2O2 (ul-trapure Merck) to ratio 2:1 in an MDC 2000 CEM mi-crowave oven (Matthews, NC,USA).

After digestion, the samples were quantitatively transferred to polyethylene tubes, using a determinated amount of redistilled and deionised water and kept until analysis.

Detection limits, calculated following the recommenddations of the International Atomic Energy Agency were μg/g for all utilized metals for this experiments.

Statistical analysis were carried out using the Statistica 8.0 statistical package (Statsoft inc., Tulsa, OK, USA). The essential difference in accumulation of metals in human hairs for population of different sex living in differently polluted areas, were calculated using Two-way analyses of variance (ANOVA), where P values are considered significant when lower than 0.05.

Any studies involving humans were conducted in accordance with national and institutional guidelines for the protection of human subjects and animal welfare. 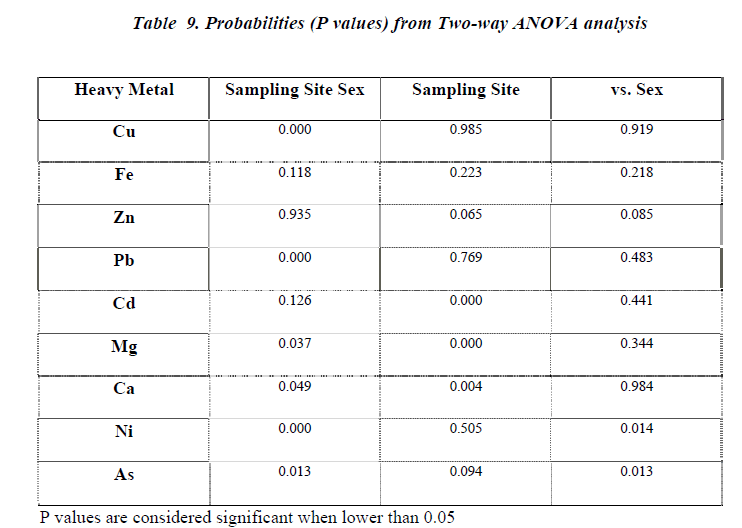 In this field, the work proposed, has selected students living in the five different and nearby towns located in the north of Salerno province. They have an environment condition with pollution differences due to various antropical activities and the presence of the Sarno river and its affluents, whose high toxic loaded waters are often used to irrigate vegetable crops, cultivated with conventional agricultural practice.(ARPAC )

The aim of this work is to find the relationship among environmental pollution and diet status by monitoring of As, Ca, Cd, Cu, Fe, Mg, Ni, Pb and Zn in hair of 200 school adolescents, boys and girls, of 12 - 13 years old, living in the “Agro Nocerino Sarnese” catchment basin.

The diet of samples are collect with individual form in which are reported the food type for days and weeks. (Figure 2; Graphic 1; Tables 5,6) 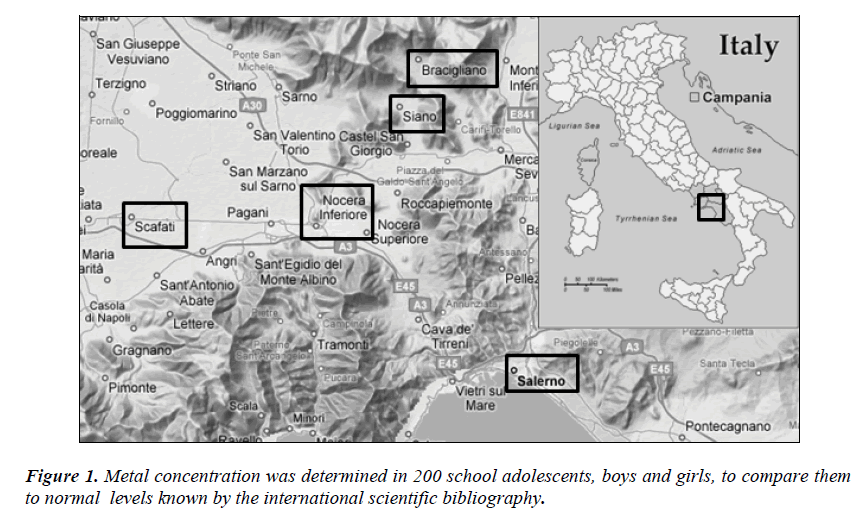 Figure 2: Metal concentration was determined in 200 school adolescents, boys and girls, to compare them to normal levels known by the international scientific bibliography. 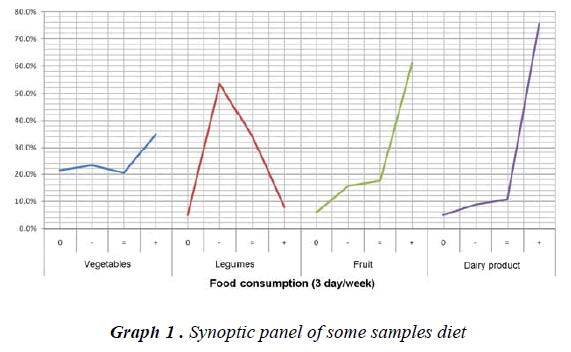 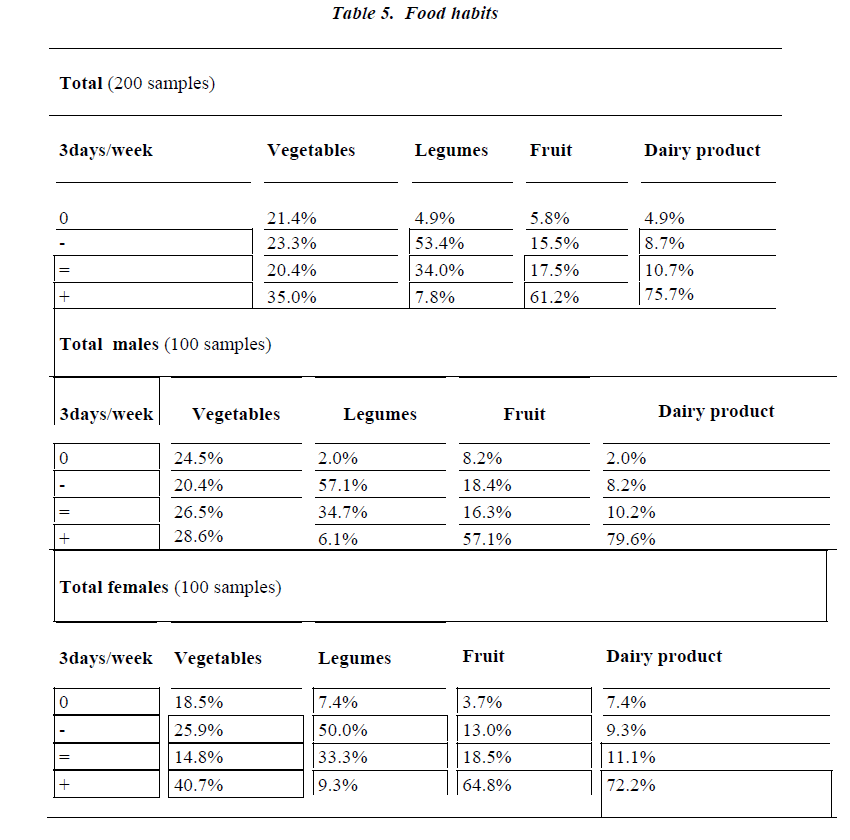 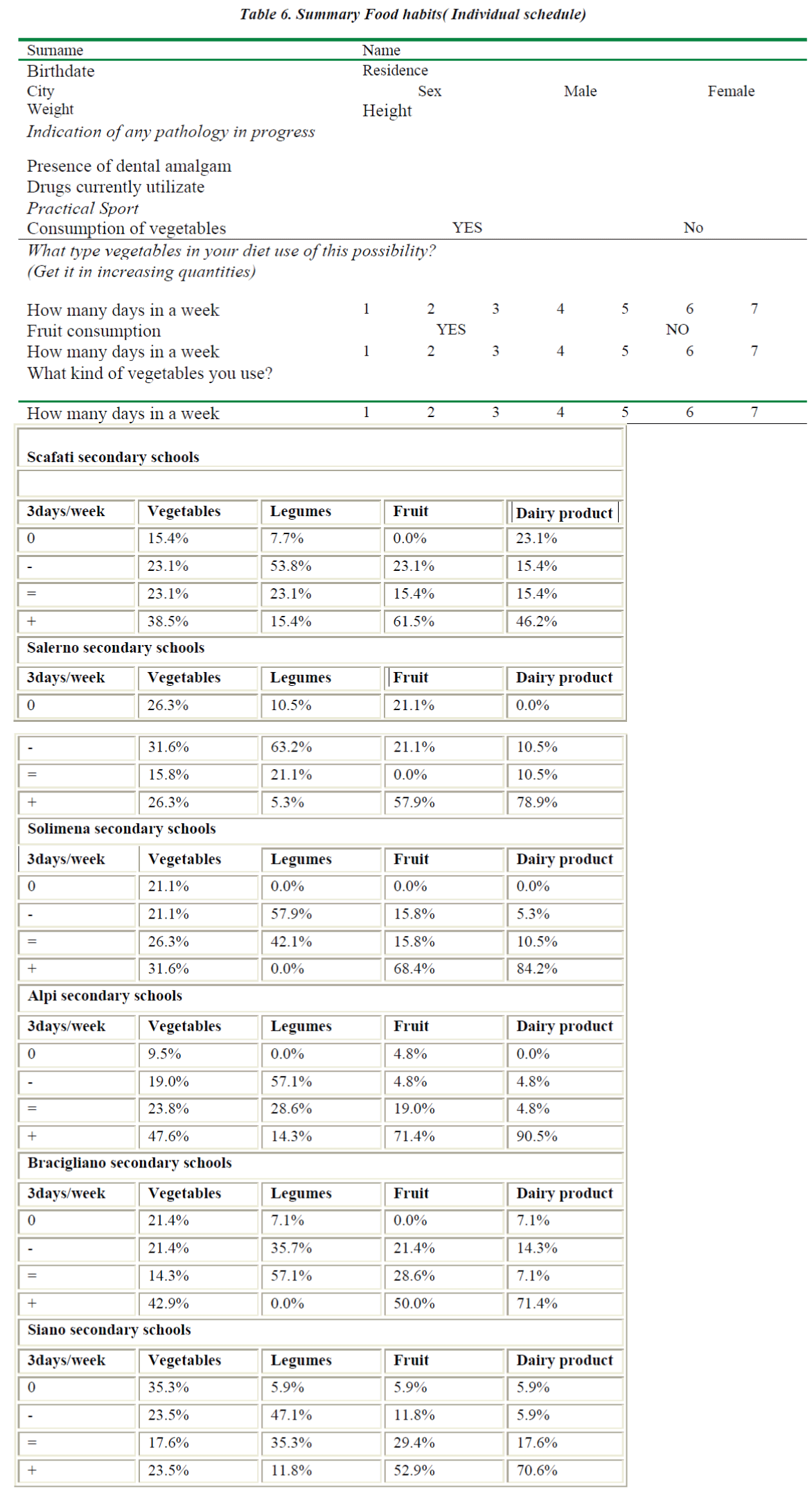 The data will be used for a preservative, educational purpose in the environmental, nutritional and healthy field regarding the living scholastic population.

The ponderal values of trace elements of nutritional interest, such as Ca, Cu, Fe, Mg, Ni and Zn obtained from male and female adolescent living in the city of Salerno and province have been compared with those available in the international literature [10-21] (Table 10). 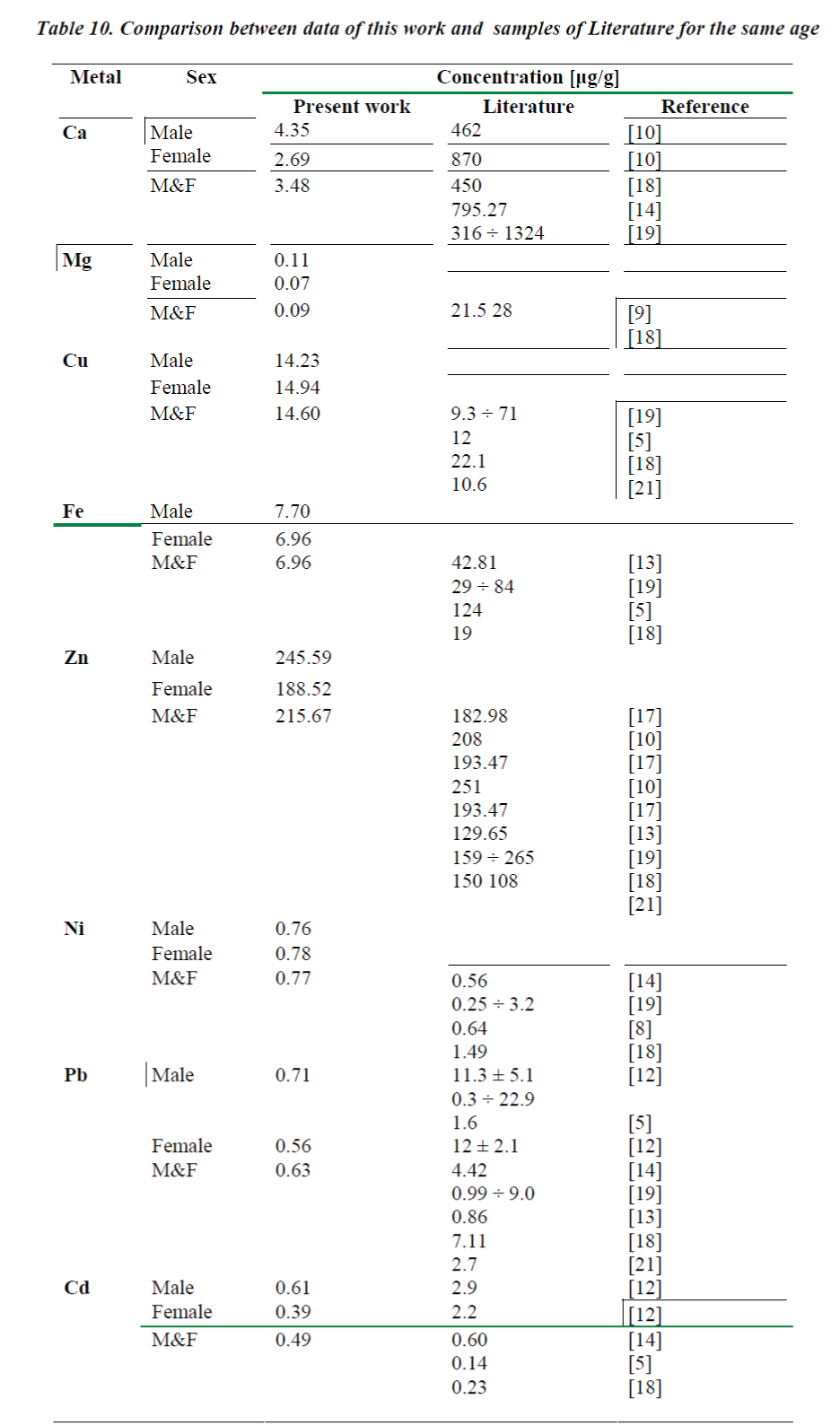 Table 10: Comparison between data of this work and samples of Literature for the same age.

This comparison shows a trend which is in part different the mineralogical profiles obtained with our studies, due to individual variations such as sex, territoriality, diet and environmental status. We must remember that some nutritive minerals such as Zn and Cu are chemically competitive with the xenobiotic ones, and represent for living being a defence against the aggression of toxic metals.

The elements mentioned above are known to be essential in a correct diet, especially during the adolescence, when the organism is more vulnerable and it needs a greater daily intake of Zn and Cu to ensure a rapid development of body.

The ponderal values of Zn in samples taken from male and females indicate a higher concentration if compared with the levels present in bibliography. In some extreme cases it can be prefigured an hiperzinchemia with possible health repercussion on the subjects involved [6,15,16].

It is important to add that Zn and Cu represent an excellent defence against xenobiotic metals, because they limit their metabolism during the intestinal absorption , and supply to metal deficit in the organs when needed. The mineralogical profile of Cu follows the normal levels known by international scientific bibliography even thought in our tested samples a different sampling site it is not followed by any variation between sexes.

Calcium is very important in blood coagulation, muscular contractions, nervous transmission and in bone formation, that is why it represents an essential element in the adolescents’ growth and development [11].Iron is a component of hemoglobin and of numerous enzymes. An iron deficit due to nutritional deficiency and/or post-menopause conditions in woman can cause anaemia and other complications in the individuals. In an environment where there are high amounts of lead and little iron in the diet, lead will be adsorbed by young children. And even low levels of lead can cause a substantial reduction in IQ [14].

Magnesium has an important role in many cellular functions . Among the intercellular cation is second for quantity only to potassium. It is involved in almost three hundred enzymic reactions, and in particular in the adenylate cyclase and esokinase enzymes which are related to the physiologic condition of human hair. It is needed a high daily intake of nearly 320 mg. The results obtained are similar for site and sex.

The results obtained from measures using a measure instrument (AA) for Ca, Fe Mg express lower values compared to the international ones.

Nickel is an essential oligoelement involved in the protection of cellular membranes. It is commonly known as cause of contact allergy. In fact in women nickel allergy is three times higher than in men, probably due to the use of jewellery.

A deficiency of Nickel can bring to a lower glycemic control and reduce the assimilation of iron. In fact in the samples tested in our study there is a higher concentration of nickel in women than in men and an accentuate presence in female samples of “Solimena” secondary school.

The Global Environmental Monitoring System (GEMS) of the United Nations Environment Program selected human hair as one of the important monitoring materials for Worldwide biological monitoring of pollution. ( Reference : From the government book, ”Toxic Trace Metals in Mammalian Hair and Nails” by the US Environmental Protection Agency)

The mineralogram, obtained from two hundred samples of male and female adolescent hair coming from different places in the north of Salerno province, containing the ponderal values of metals As, Ca, Cd, Fe, Mg, Ni, Pb and Zn, gives preliminary informations on the possible influence of environmental status on the health of youth residing in this area. It can be asserted that there is not a wide concentration of toxic metals in the samples examined except, in some individual cases dislocated in some areas.

The obtained concentrations of essential metal indicate a deficit for some values as from bibliographic references, except for zinc, for which deficit conditions, compared to the mineral need of adolescents, indicate inadequate food habits for their growth need like data reported in tables.