Materials and Methods: This is a report of 3 cases of LMS with Ondine's curse. Characteristics and clinical presentations of three patients were described and analysed.

Results: All patients were male and they were 63, 65 and 84 y old respectively. All had diabetes mellitus and poor glucose control. Patients 2 and 3 had snoring, smoking and alcohol use history. Patients 1 and 2 had hypertension. Ondine's curse occurred on the 5th, 10th and 23rd d after their strokes. All were on mechanical ventilation. Patients 2 and 3 were extubated successfully after 4 and 52 d of onset of Ondine’s curse. Patient 1 died.

Normal human respiratory functions can be categorized into voluntary, automatic, limbic, and reflex respirations [1]. Automatic respiration mainly regulates breathing in response to the changes in oxygen, carbon dioxide and pH contents in the blood and cerebrospinal fluid [2]. When hypoventilation occurs, the automatic respiration system will regulate the depth and frequency of breaths, even during awake in order to improve hypoxia and hypercapnia. Automatic respiration centers are known located in medulla [1].

Ondine’s curse, also known as Central Alveolar Hypoventilation (CAH) syndrome is a rare clinical condition characterized by the loss of automatic respiratory drive, mostly during sleep but also during wakefulness. Two types have been described: congenital and acquired CAH. The congenital CAH occurs at birth and is extremely rare [3] while the acquired CAH can result from medulla ischemia, hemorrhage, tumor, infection, demyelinating diseases, trauma, some mitochondrial diseases, degenerative diseases or anoxic-ischemic damage [2,4].

From January 2012 to January 2017, 5011 patients with cerebral infarctions were hospitalized at our institution. Among them, three patients had Lateral Medullary Syndrome (LMS) with Ondine's curse. All progressed to respiratory failure during sleeping. We report these three cases to analyse the clinical characteristic of LMS with Ondine's curse. This report was approved by the Ethics Committee of Beijing Chaoyang Hospital.

Case 1, an 84-year-old man with history of hypertension, diabetes mellitus and hyperlipidemia presented with suddenonset vertigo, mild weakness of his left arm and leg, and numbness of left face ten days before admission. No history of snoring, smoking and alcoholism. No positive family history. On admission, his Blood Pressure (BP) was 163/74 mmHg, and the neurologic examination revealed dysarthria, left facial and right body hemianesthesia, and positive bilateral Babinski sign. His Fasting Blood-Glucose (FBG) was 17.30 mmol/L, Low Density Lipoprotein (LDL) was 3.36 mmol/L, glycosylated hemoglobin (HbA1c) was 9.8%, and Homocysteine (HCY) was 21 μmol/L. Electrocardiograph (ECG) and chest X-ray were unremarkable. Brain MRI showed acute infarction in the left lateral medulla (Figure 1a). MR angiography showed mild-moderate stenosis of left Anterior Cerebral Artery (ACA) and right Middle Cerebral Artery (MCA), and the other arteries were normal. On the 13th d of admission (23 d after onset of stroke), he became apneic during sleep. Emergent intubation and respirator support were initiated. Arterial Blood Gas (ABG) during apnea showed pH of 6.91, pO2 of 81 mmHg and pCO2 of 71 mmHg, with an O2 saturation of 84%. Four hours after intubation, his respiration and consciousness did not improve. The respirator therapy was discontinued upon family’s request. Then the patient died. 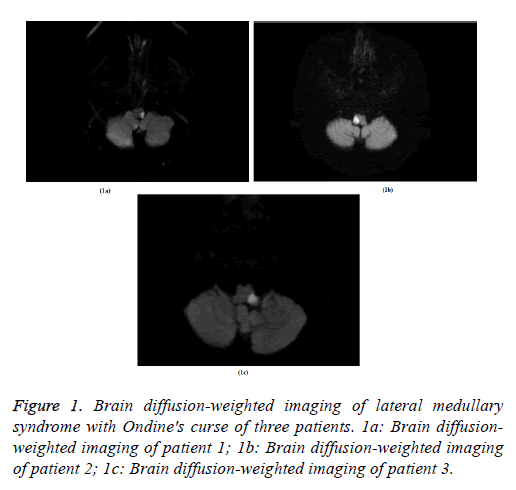 Case 2, a 63-year-old male patient with smoking, alcoholism, snoring, diabetes mellitus, hyperlipidemia, family history of stroke and a previous stroke 9 years ago, presented to our department complaining of vertigo, dysarthria, dysphagia and headache for 2 d. His father had stroke and no other positive family history. On admission, his BP was 155/103 mmHg, and the neurologic examination revealed dysarthria, and loss of pharyngeal reflex. His motor and sensory systems were normal. His FBG was 16.27 mmol/L, LDL was 1.08 mmol/L, HbA1c was 11.1%, and HCY was 23 μmol/L. ECG and chest X-ray were all unremarkable. Brain MRI showed acute infarction in the right lateral medulla (Figure 1b). In CT angiography, the right Vertebral Artery (VA) wasn’t shown, and the other arteries were normal. On the 3rd d of admission (five days after onset of stroke), he suddenly became apneic during sleep. Intubation and respiratory therapy were given immediately. Initial ABG showed pH of 7.21, pO2 of 117 mmHg and pCO2 of 62 mmHg, O2 saturation at 98%. His consciousness and respiration recovered gradually. After 4 d’ mechanical ventilation, he was successfully weaned and extubated.

Case 3, a 65-year-old male patient with smoking, alcoholism, snoring, diabetes mellitus and hypertension presented with chief complaint of vertigo, diplopia and dysphagia for 1 d. He also had nausea, vomiting and numbness of his left face and right side of his body. No positive family history. On admission, his BP was 133/65 mmHg, and the neurologic examination revealed dysarthria, loss of pharyngeal reflex and hemianesthesia of left facial and right body. The motor system was normal. His FBG was 21.16 mmol/L, LDL was 2.40 mmol/L, HbA1c was 9.6%, and HCY was 23 μmol/L. ECG and chest X-ray were all unremarkable. Brain MRI showed acute infarction in the left dorsal-lateral medulla (Figure 1c). CT angiography was negative except mild stenosis of left internal carotid. On the 9th d of admission (ten days after onset of stroke), he became apneic during sleep suddenly. Intubation and respirator support were initiated. His ABG showed pH of 7.1, pO2 of 118 mmHg and pCO2 of 57 mmHg, and O2 saturation at 100%. He survived but his consciousness did not improve. After 52 d of ventilator support, this patient was weaned and extubated successfully.

In all our 3 patients, the apnea happened during sleep and their initial ABGs showed high PaCO2 (Table 1). The diagnosis of Ondine's curse was therefore made.

Respiration is centrally controlled by 3 groups of neurons: 1) the pontine respiratory group, which controls switching between inspiration and expiration, consists of the parabrachial/Kolliker-Fuse complex in the rostral dorsolateral pons; 2) the dorsal respiratory group, which receives afferent signals from peripheral respiratory chemoreceptors and pulmonary mechanoreceptors and transmits to the brainstem respiratory network, is located in the nucleus solitarius; 3) the Ventral Respiratory Group (VRG), which contains inspiration, expiration and respiratory rhythm-generating neurons, is a respiratory column extending from cervical cord C1 to the level just below the facial nucleus [2,5]. The infarction of medulla oblongata can cause the impairment of VRG and involve the automatic respiration system. In patients with LMS, the feedback mechanisms of automatic respiration system, which dependent on changes in oxygen, carbon dioxide, and pH in the blood and CSF, will be hyporeactive [2], so they could have difficulty to regulate the respiration when hypoxia and hypercapnia happened. Bilateral lesions are not necessary to cause Ondine’s curse [2]. Unilateral medullary lesion can cause the automatic respiration dysfunction because the efferent fibers from the respiratory centers descend on both sides of the spinal cord after crossing at the medullary level. Hence, a unilateral lesion can affect the efferent pathways on both sides [1], and develop Ondine's curse.

The sudden apnea during sleep may be caused by clinical worsening by thrombi propagation, reduced blood flow in the ischemic zone, and perilesional edema [6,7]. Stroke patients with Sleep-Disordered Breathing (SDB) may have potential risk for Ondine’s curse as well, because most Ondine’s curse occurred in the night-time. More than 50% of patients with acute stroke have SDB [2]. But Ondine's curse is rare. Its prevalence is unclear. In our department, the morbidity was 0.06%. We consider there may be 3 necessary conditions to trigger Ondine’s curse in patients with stroke: 1) infarctions which affected automatic respiration system, 2) apnea, mostly during sleep and 3) other suspected risk factors.

All 3 patients had diabetes and poor glucose control. Diabetes may be a risk factor for Ondine’s curse. According to the previous reports, diabetes can increase SDB prevalence [8]. The reason is unclear. Chronic diabetes may affect all organs including respiratory system. It may be caused by microangiopathy of pulmonary capillaries, autonomic neuropathy, myopathy of respiratory muscles or changes in collagen increase the collapsibility of the upper airway [9]. Patients 1 and 2 both had hypertension. According to the previous reports, stroke patients with older age, male gender, night-time stroke onset, higher body mass index, diabetes, hypertension, coronary heart disease, excessive daytime sleepiness (higher Epworth sleepiness score) preceding stroke onset, and macroangiopathic etiology of stroke were more likely to have SDB8. Not all LMS patients would develop Ondine's curse. People with these risk factors may have higher prevalence of Ondine's curse. Thus, improving risk factors is necessary to decrease its incidence.

Ondine's curse is a sudden and fatal condition. Once it occurs, mechanical ventilation is necessary. Only some can successfully wean off the ventilator and survive. Infection is the most common cause of death after mechanical ventilation [10]. Mishina et al. inferred that tracheotomy might be effective to improve the outcome after onset of Ondine’s curse due to assisting alveolar ventilation by reducing dead space ventilation [11]. Performing the Polysomnogram (PSG) for LMS patients, especially for those patients with high risks, is quite important for the prevention of Ondine’s curse. Early diagnosis and the use of Continuous Positive Airways Pressure (CPAP) can be effective [12]. No drug therapy was proved to be effective. Patients with the risk of Ondine’s curse should not be supplied with oxygen without ABG monitoring. Supplying with oxygen may delay the diagnosis and also aggravate hypercapnia due to hypoventilation and hyporeactivity of the breathing center [13].

Ondine’s curse may be delayed after the onset of stroke. Our 3 patients had it on the 5th, 10th and 23rd d post stroke. It could occur 3 months after the brainstem stroke [14]. The delay in the development of Ondine’s curse after LMS may be explained by the secondary neuronal degeneration, apoptosis, or abnormal plasticity involving local synaptic interconnections [2].

Even rare, Ondine's curse can be secondary to unilateral LMS, especially in the patients with risk factors. Ondine's curse is often fatal. Therefore, diagnosing early and improving the risk factors aggressively are necessary. PSG should be done as soon as possible. Ondine's curse is still not well understood, more researches are needed to define its epidemiology, etiology, clinical characteristics, treatment options and prognosis.