Prematurity is one of the leading causes of morbidity and mortality among newborns, occurring in more than one in ten live births. Late preterm neonates are born between 34 and 36, 6/7 weeks of gestation and they constitute around 70% of all preterm deliveries in 2009 which has further increased over a decade [1]. The majority of late preterm births are due to spontaneous preterm labor, preterm premature rupture of the membrane, and deliveries due to feto-maternal indications. Other obstetric conditions include maternal urinary tract infection, hypertensive disease of pregnancy, gestational diabetes, and multiple pregnancies. In utero growth restriction and the non-reassuring fetal status represent the main fetal factors [2-5]. Recommendations for antenatal steroids administration for fetal lung maturity in terms of gestational age and tocolysis are not well established. Still, most practitioners do not advocate the use of antenatal corticosteroids or tocolysis after 34 completed weeks of gestation.

Neonates born beyond 34 weeks are fallaciously termed as 'near term,' and adverse perinatal outcomes in these neonates are undoubtedly enhanced. The risk of neonatal outcomes is inversely proportional to gestational age. The frequency and severity of neonatal complications are reduced in all fetuses with increase in duration of fetus in utero. Late preterm neonates are at increased risk for complications in comparison to term neonates, such as respiratory complications like Respiratory Distress Syndrome (RDS), Persistent Pulmonary Hypertension (PPHN), Transient Tachypnea of the Newborn (TTN), Metabolic complications like hypoglycemia, and hypocalcemia, temperature instability, neonatal hyperbilirubinemia, feeding difficulties including Necrotizing Entero Colitis(NEC) and prolonged Neonatal Intensive Care Unit (NICU) stay [6,7].

This prospective observational cohort study was conducted at Maternal and Child Health Unit of Shri BM Patil Medical College Hospital and Research Center, BLDE (DU), Vijayapura, Karnataka, India, from October 2019 to September 2020. Late Preterm neonates born between 34; 0/7 and 36; 6/7 weeks of gestation were compared with the equal number of term neonates (37; 0/7 to 41; 6/7 weeks gestation). Consent was obtained from the mothers and parents of all neonates included in the study, and the institutional ethics committee approved the study.

Neonates wherein the gestational age could not be ascertained either by ultrasound or by New Ballard score and neonates with major congenital malformations and chromosomal anomalies were excluded.

Was calculated using the formula n=z2pq/d2, where z=1.96, p=prevalence of late preterm infants in this hospital as per the previous records, q=(1-p), d=95% confidence interval. The sample size as calculated by the above formula was 187. Hence a total of 200 late preterms and 200 term neonates were included in the study group from October 2019 to September 2020.

During the study period, all neonates delivered in the hospital were subjected to gestation assessment by early obstetric ultrasound (6-12 weeks) or by new Ballard score. The enrolled babies were divided into two groups as follows. Late Preterm Neonates: Gestational age 34; 0/7 to 36; 6/7 weeks. Term Neonates: Gestational age 37; 0/7 to 41; 6/7 weeks.

The statistical methods (descriptive studies, chi-square/ contingency coefficient analysis, and independent samples ttest) were carried out through the SPSS for Windows (version 23.0). The p-value <0.05 was taken as statistically significant. 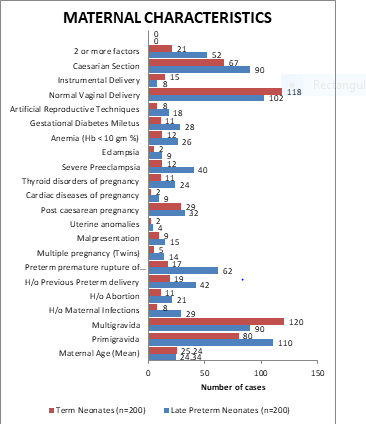 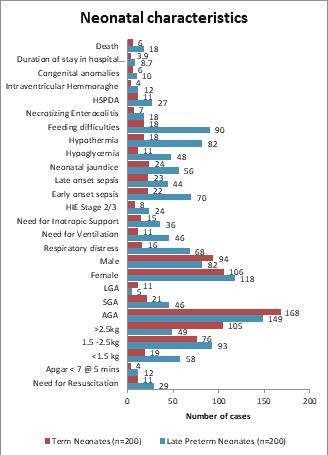 The present study assessed the risk factors associated with late prematurity, identifying many determinants that need to be recognized early to prevent it. Young and advanced maternal age is a known risk factor for preterm labor. Carter et al. quoted that age <17 and >35 is associated with increased risk of late preterm birth [13]. In our study, the mother's mean age in the late preterm group was 24.34 ± 4.07 years, and the term group was 25.24 ± 4.54 years, which was not statistically significant.

Several maternal medical conditions, such as diabetes, hypertensive disorders of pregnancy, and asthma, are associated with an increased risk for preterm birth. The decision to deliver a neonate preterm is taken by balancing the maternal and fetal consequences of continuing the pregnancy against the morbidity and mortality risks associated with prematurity [20].

Laughon, in their study observed a significant association between the occurrence of maternal comorbidities and the increased risk of prematurity. The main comorbidities were maternal hypertensive disease and diabetes [3,5]. In the present study, there was a statistically significant association between premature birth and maternal medical conditions like hypertensive disease of pregnancy (p=0.001) or diabetes (p=0.004) in the late preterm births. We observed that increase frequency of late preterm birth was associated with preterm premature rupture of membrane (31%), hypertensive disorder of pregnancy (20%), maternal anemia (13%), and eclampsia (4.5%), cardiac diseases of pregnancy (4.5%), gestational diabetes mellitus (14%), thyroid disorders of pregnancy (12%) and artificial reproductive techniques (9%) in this study.

According to the Leal et al. study, urinary tract infection is the most common maternal infection present during pregnancy related to preterm labor and prematurity [24]. A statistically significant association between preterm birth and maternal infections was observed in this study (p ≤ 0.001). Laughon et al. stated spontaneous preterm birth, including preterm labor and PROM, resulted in two-thirds of all late preterm births [3]. Hypertensive disease of pregnancy, and diabetes represented the other third. This study reported 31% PROM cases resulting in late premature births, comparable to the Hackenhaar et al. study [25].

Nadin et al. stated that early maternal hospitalization during pregnancy indicates the occurrence of maternal or fetal health problems, which may either result in premature birth or cesarean section [22]. When maternal or obstetric complications occur, the delivery method's risks and benefits can be considered with expectant management on a daily basis for maternal and neonatal health to determine the best delivery time. An increased frequency was observed in the present study in pregnant women with late preterm births requiring hospitalization for more than 24 hours until delivery, probably because there was an effort made to postpone premature birth by arresting spontaneous labor.

Cesarean sections are an effective life-saving intervention for mothers and babies, but only when appropriately indicated for medical reasons as stated by World Health Organization. The observations of the present study, state that the cesarean section rate was 45% in the late preterm group and 33.5% in the term group. Among all the cesarean section cases, 13% of patients underwent repeat cesarean, and 8% had successful labor trials after cesarean section. This data is similar to study by Guimaraes et al. which quoted that Brazil has a high prevalence of cesarean births (52.8%), with 38.1% being performed in public hospitals [26]. The studied hospital is a tertiary care center for high-risk pregnancies in North Karnataka, India, where the most complex cases are managed and hence the likelihood of requiring a cesarean section is high. Lisonkova et al. showed that in centers with increased prematurity rates, neonatal death rates were lower [27]. Late preterm births that occur for medical reasons are advantageous as they were performed on those at risk of mortality.