The most feared complication of intestinal malrotation is midgut volvulus, vascular compromise, and eventual bowel necrosis due to the narrow mesenteric base associated with malrotation which suspends the entire midgut vasculature. Although the large majority of those with malrotation become clinically symptomatic within the first two years of life, a small portion of patients enter adulthood undiagnosed. Nevertheless, treatment of intestinal malrotation is performed surgically using the Ladd procedure. However, adults are still commonly treated with an open technique due to its infrequency in the adult population despite the well-reported safety and efficacy of a minimally invasive technique. To encourage its use for the correction of rotational anomalies without volvulus, we describe in detail the surgical technique of the laparoscopic Ladd procedure in the adult patient using real-time intraoperative images.

Intestinal malrotation occurs when there is arrest or disruption of the normal rotation of the embryonic gut during the fourth to twelfth week of embryonic development. Normally, the midgut undergoes a 270° counterclockwise rotation around the superior mesenteric artery, leading to retroperitoneal fixation of the duodenum at the ligament of Treitz and fixation of the cecum by peritoneal bands to the lateral abdominal wall. This leads to elongation and fixation of the takeoff of the superior mesenteric artery branches along an axis extending from the ligament of Treitz in the left upper quadrant to the ileocecal valve in the right lower quadrant [1]. Disruption or arrest of this rotation leads to the cecum remaining in the epigastrium. The fibrous bands that fix the duodenum and cecum continue to form, resulting in Ladd’s bands that extend from the cecum and cross over the duodenum to the lateral abdominal wall. Because the takeoff of the branches of the superior mesenteric artery remain confined to the epigastrium, the resulting narrow mesenteric base leads to an increased lifetime risk of bowel obstruction, volvulus, or strangulation.

The most feared complication of intestinal malrotation is midgut volvulus with ischemia and eventual necrosis due to the narrow-based mesentery that is associated with malrotation. First described in 1941, the traditional surgical repair for malrotation is division and lysis of Ladd’s bands, straightening of the duodenum with positioning of the small bowel in the right hemiabdomen, widening of the mesenteric base, and removal of the newly-positioned appendix to avoid future failure or delay in diagnosis of acute appendicitis [2-4]. This Ladd procedure is designed to minimize the future risk of volvulus and vascular compromise. In the circumstance that acute volvulus has occurred, the Ladd procedure is performed during a laparotomy to reduce the distended and edematous torsed bowel. In the absence of volvulus, the Ladd procedure can be safely performed laparoscopically to correct malrotation with the advantage of smaller incisions, less postoperative pain, and decreased likelihood of complications from adhesion formation [5-8]. Nevertheless, adult patients who are found to have intestinal malrotation without volvulus are commonly treated with an open technique due to its infrequency in adults. To encourage familiarity with the condition, clinical presentation, and most importantly treatment, we will describe the surgical technique using step-by-step descriptions and representative real-time intraoperative images of the laparoscopic Ladd procedure in the adult patient without volvulus.

Video of a laparoscopic Ladd procedure in an adult patient was reviewed and examined. Intraoperatively, the laparoscopic equipment was set to record in high-definition during all key portions of the procedure. Following the procedure, screenshots were captured and saved at critical points to demonstrate the vital steps of the surgical technique.

The patient is placed in a supine position on the operating table with a pillow placed beneath the legs to cause mild flexion of the hips and knees. This helps to relax the abdominal musculature. General anesthesia is induced with an endotracheal tube and paralytics are used for relaxation of the abdominal wall. An orogastric tube is passed for gastric decompression and bladder decompression is achieved by placing a Foley catheter. The skin is prepared in routine manner for sterilization.

Entry into the abdomen is per surgeon preference. Our preferred approach is a blind technique with a Veress needle at Palmer’s point. After confirmation of placement into the peritoneum and proper pneumoperitoneum with CO2 insufflation are established, a 5-mm optical trocar with a zero-degree scope is placed into the left periumbilical region. Port placement can vary significantly due to surgeon preference. We prefer a slightly lower placement in the abdomen due to the work needed on the root of the small bowel mesentery. Therefore, an additional 12-mm working port is placed in the right periumbilical region, as well as a 5-mm right subcostal port (Figure 1). At least a hand’s breadth width is maintained between ports with the greatest distance between the two operating ports to avoid instrument crowding. 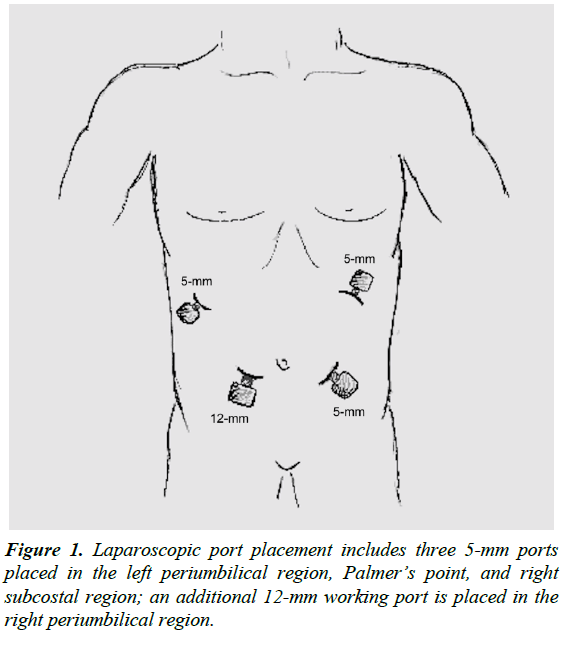 After thorough exploration of the abdominal cavity has been accomplished with a 5-mm 30-degree scope and intestinal malrotation has been confirmed, the patient is placed in the reverse Trendelenburg position to aid visualization by lowering the small bowel away from the duodenum and liver to accentuate Ladd’s bands. Liver retraction is generally not necessary for this dissection. Division and takedown of Ladd’s bands is then performed typically with ultrasonic energy, electrocautery, tissue sealing devices, or sharp dissection to mobilize the cecum and ascending colon (Figure 2). Medial traction of the cecum and ascending colon using non-traumatic graspers will reveal the duodenum and expose the Superior Mesenteric Artery (SMA), which is located between the duodenum and the ascending colon (Figure 3); this is the most tedious dissection of the operation due to the depth of the tissue towards the retroperitoneum in combination with the port angles. Because the hepatic flexure is congenitally absent from the right upper quadrant leading to the duodenum as an almost exclusively intraperitoneal organ, this method is still generally more facile than a laparoscopic Kocher maneuver. To widen the base of the mesentery for prevention of future midgut volvulus, any adhesions between the mesentery and small bowel are lysed (Figure 4). After full mobilization of the cecum, a stapled appendectomy is performed near the base of the appendix where it inserts into the cecum (Figure 5); to ascertain a complete appendectomy, the different lengths of the staple lines on either side of the stapler are visualized with a short staple line on the specimen and a longer staple line on the cecum. The mesoappendix is then taken with an additional vascular load of the stapling device, although sutures/ties, tissue sealing devices, or clips are appropriate as well. The specimen is exteriorized in a collection bag. The duodenum is then straightened so that is oriented down toward the right lower quadrant and the colon is positioned in the left hemiabdomen. 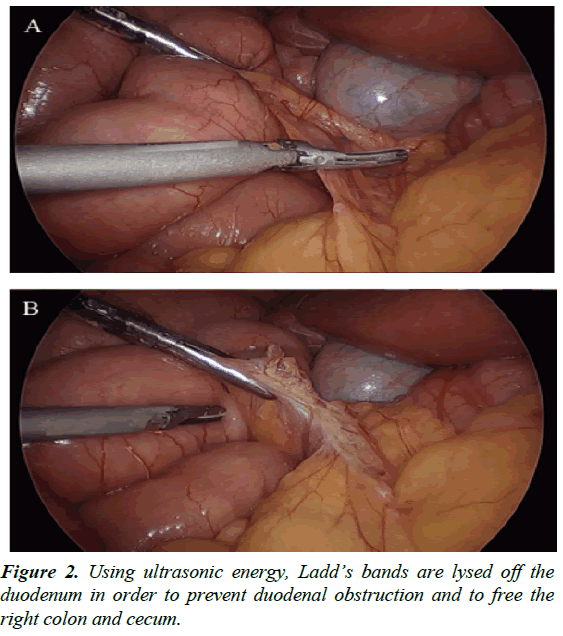 Figure 2: Using ultrasonic energy, Ladd’s bands are lysed off the duodenum in order to prevent duodenal obstruction and to free the right colon and cecum. 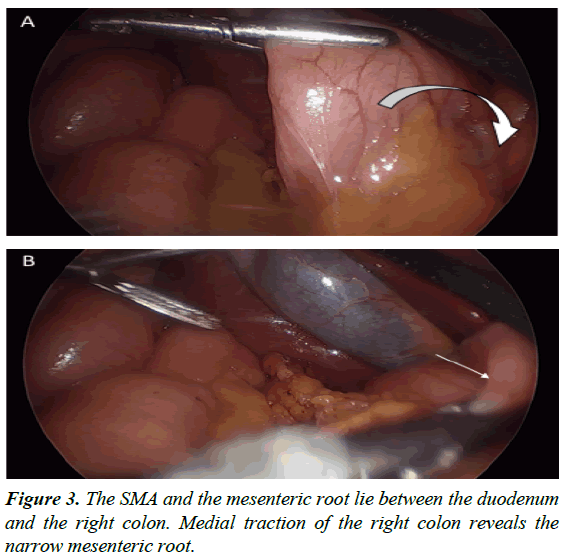 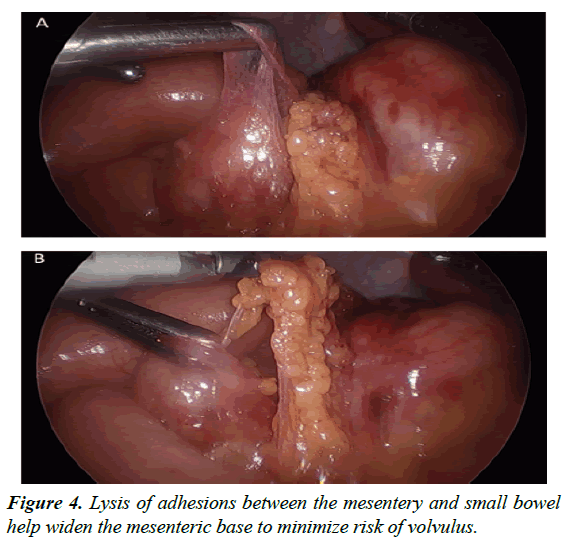 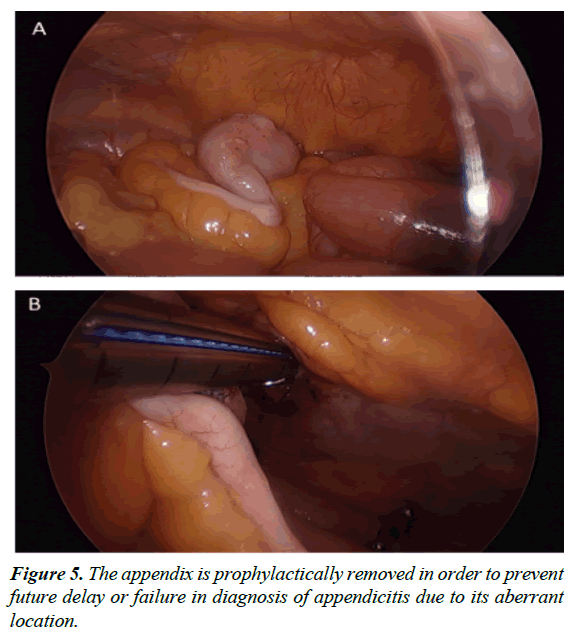 Figure 5: The appendix is prophylactically removed in order to prevent future delay or failure in diagnosis of appendicitis due to its aberrant location.

The true incidence of intestinal malrotation remains unknown as rotational abnormalities can indefinitely remain asymptomatic. When symptomatic, the majority present within the first year of life. Although rare, some may present in adulthood where diagnosis is often delayed and thus associated with increased morbidity [9]. Approximately 80% of those with malrotation will present in the neonatal period with the classic presentation of bilious emesis [10]. Other common symptoms include abdominal distention, bloating, malabsorption, chronic diarrhea, constipation, volvulus, and gastrointestinal bleedings. Malrotation in adulthood can often present with a variety of chronic symptoms such as postprandial abdominal pain and intermittent vomiting [11,12]. Diagnosis in children is most commonly made with upper gastrointestinal series with oral contrast once perforation has been ruled out with radiography [13]. On the other hand, in adults abdominal computed tomography is more often used as patients often present with the chief complaint of abdominal pain.

Most controversy regarding malrotation surrounds the surgical correction of asymptomatic or incidentally discovered malrotation. As the term intestinal malrotation refers to a spectrum of rotational anomalies rather than one single congenital anomaly, a wide variety of clinical presentations and complications exist. These manifestations range from isolated duodenal malrotation to complete non-rotation to even reversed rotation [14]. Although there is general consensus for patients with chronic presentation to undergo an elective Ladd procedure and for those with acute presentation of volvulus to require emergent laparotomy, there is much debate surrounding the asymptomatic patient. Proponents of surgical intervention argue incidental discovery of malrotation warrants surgical repair as there currently exists no reliable diagnostic modality to accurately predict which asymptomatic patient will later develop clinical manifestations or sequelae. As the complications of midgut volvulus can be catastrophic and potentially fatal, some argue this risk alone is enough indication for operative intervention [15-18]. On the contrary, others have argued that malrotation found incidentally poses no harm [19] or that surgery should be reserved only for those with abdominal complaints related to malrotation [20,21]. They argue many of these patients will remain asymptomatic for the entirety of their lives and that the Ladd procedure carries with it risks of any other abdominal surgery.

Previous studies examining malrotation in the adult population have demonstrated the advantages of undergoing the Ladd procedure using a minimally invasive technique. Those who underwent laparoscopic repair experienced shorter hospital stays, comparable complication rates, similar symptom resolution, and decreased narcotic requirements on postoperative day one [22,23]. Despite these findings, the open Ladd procedure remains the gold standard for treatment of malrotation in many centers. With numerous reports in the literature supporting the safety, utility, and efficacy of the laparoscopic Ladd procedure, we encourage its use in the adult patient. Ultimately, discussion between the surgeon and patient will determine management of intestinal malrotation. Consideration must be taken of the risks and benefits of not only operative and nonoperative approaches, but also of the different types of operative treatment. With the expected advantages of laparoscopy including smaller incisions and decreased postoperative pain, this is an excellent approach for the correction of rotational anomalies without the morbidity of laparotomy.