Increasing prevalence of multi-antibiotic resistant bacteria in humans is a major concern for public health. The widespread use of antimicrobial agents in plant production, animals and food production has created a reservoir of resistant bacteria with resistance genes that can be transmitted to humans through foodborne route. Hence, the priority of this study was to isolate and characterize multi-antibiotic resistant bacteria from retail sushi in Kampar. Twenty sushi samples consisting of egg, shrimp, cucumber, raw salmon, and fish roe were sampled. A total of 22 bacteria colonies were isolated on nutrient agar supplemented with ampicillin. Gram staining, biochemical tests and Kirby-Bauer antibiotic susceptibility tests were carried out to investigate characteristics of bacterial isolates. From the 22 bacterial isolates, 45% (10/22) were found to be multi-antibiotic resistant. All bacterial isolates were then cultured overnight with ampicillin-supplemented nutrient broth and total DNA was extracted from each using the rapid boil method. The extracted DNA was used as a template for PCR amplification of β-lactamase gene using blaSHV and blaTEM specific primers. Surprisingly, 9% (2/22) of the multi-antibiotic isolates were tested positive for blaSHV gene, while none carried blaTEM gene. The bacteria harboring blaSHV was identified to be Raoultella ornithinolytica through API 20E test. The presence of β-lactamase gene blaSHV in the bacteria isolates from sushi may be a source of transmission of antibiotic resistance traits in human via the food chain.

Large amounts of antibiotics are used in human therapies, farm animals and aquaculture as growth-enhancing compounds. Antibiotics are also used increasingly in plant biotechnology for the treatment of bacterial diseases [1-2]. As a result, bacteria are constantly subjected to selection pressure and acquire resistance to multiple drugs. The resistant bacteria may be transmitted to humans and cause diseases that cannot be treated using conventional antibiotics [3].

One of the first reports of resistance in food was reported by Starr and Reynolds [4-5]. It was shown that turkeys fed with streptomycin-containing diet carried bacteria that were resistant to streptomycin antibiotic compared to the turkeys fed with non-antibiotic-supplemented feed. As food from animals is considered a major reservoir of antibiotic-resistant bacteria, researchers are continuously monitoring the patterns of resistance in food from animals. For instance, methicillin-resistant Staphylococcus aureus was isolated in 31/402 (7.7%) of retail pork samples from four Canadian provinces [6]. In Vietnam, a study demonstrated that 50.5% of Salmonella spp. and 83.8% of Escherichia coli from raw food were resistant to at least one antibiotic [7]. The outbreak of Shigella sonnei infection in Norway, Sweden, and the United Kingdom in 1994 incriminated imported iceberg lettuce as the vehicle of transmission[8]. Studies have also documented the emergence of nalidixic acid resistant Shigella dysenteriae type 1 in coconut milk dessert [9].

Specifically, β-lactamases represent the most common cause of bacterial resistance to β-lactam antibiotics because these antibiotics are the preferred treatment regimens for many infectious diseases [10-11]. TEM and SHV are both examples of class A β-lactamases, the earliest class of β-lactamase which was discovered and the most prevalent class among existing pathogens today [12]. TEM- and SHV-type β-lactamases have been detected in clinical isolates around the world [13-17]. Molecular analysis of antibiotic resistance genes and antibioticresistant mobile elements showed that identical elements could be found in bacteria that colonize both animals and humans [7]. This provides clear evidence of a transfer of these resistance genes between human and animal bacteria. As sushi is mostly made out of raw materials, it was hypothesized that it could be a reservoir for resistance genes dissemination to humans via the food chain. This study here reports the isolation of multi-antibiotic resistant bacteria, and detection of the β-lactamases gene blaSHV in bacteria isolated from ready-to-eat sushi in Kampar, Malaysia.

Different kinds of sushi were selected and targeted for this study: cucumber, egg, fish roe, raw salmon and shrimp sushi. All samples were collected from a hypermarket and a Japanese restaurant in Kampar, Perak Malaysia. Direct inoculation method was used in which the surface of sushi samples were swabbed thoroughly with sterile cotton swab before streaking onto ampicillin (Sigma Aldrich, USA)-supplemented nutrient agar (Merck, USA). Agar plates were then incubated overnight in 37ºC incubator. The following day, single colonies with different morphological characteristics were selected and propagated onto fresh agar plates supplemented with ampicillin.

A single colony from a pure culture was mixed with one drop of sterile saline and smeared on a microscope slide for Gram stain (LabChem, Malaysia). All bacterial strains isolated were also tested using a range of general biochemical tests such as motility, hydrogen sulfide test, oxidation- fermentation (OF), oxidase and catalase tests. API 20E Bacteria Identification Kit (bioMerieux®, USA) was utilized to identify the bacteria isolates.

From each pure culture, the turbidity of the inoculum was adjusted to 0.5 McFarland standard and swabbed on Muller- Hinton agar using a sterile swab. For each plate, six types of antibiotic discs for ampicillin (Am), amikacin (Ak), ceftriaxone (CRO), chloramphenicol (C), tetracycline (TE) and trimethoprim (W5) (BD BBL™ Oxoid, UK) were applied onto the surface of agar using sterilized forceps. The inoculated plates were incubated agar side up in a 37°C incubator for 16-18 hours. The zone of inhibition was measured after incubation for 16 to 18 hours in 37°C incubator according to the Clinical and Laboratory Standards Institute (CLSI) standard (Performance Standards for Antimicrobial Susceptibility Testing; Twenty- First Informational Supplement, 2011).

In this study, the isolates were either coccobacillus or bacillus gram-negative bacteria, except for one isolate. The diameter for zone of inhibition to the nearest millimeter was measured for each antibiotic tested and summarized in Table 1. From this study, all of the isolates (100%)

Table 1: Rate of antibiotic resistance among the 22 bacterial isolates from sushi samples.

Table 2:The antibiograms of the 22 bacterial isolates from sushi samples. Samples tested intermediate for a particular antibiotic were considered to be resistant to ease interpretation of data.

Total DNA extracted from the 22 bacterial isolates was subjected to 16S rRNA PCR amplification with gene specific primers to ensure that the DNA was intact for subsequent amplification of β-lactamases genes (Figure 1a). For blaSHV gene, two isolates (9.1%) were screened positive for presence of blaSHV (Figure 1b). DNA sequencing results proved the specificity of the PCR process to blaSHV (data not shown). For blaTEM amplification, none of the samples produced any products with the expected sizes. Since the positive control for blaTEM PCR produced a single amplicon with the expected size, this indicates the authenticity and reliability of the PCR process for blaTEM screening. Hence, none of the samples harbored any blaTEM homologous genes. Both of the bacterial isolates which carried blaSHV were subsequently identified as Raoultella ornithinolytica using bioMérieux® API 20E kit. Coincidentally, both of the isolates showed resistance to ampicillin alone (Table 3). 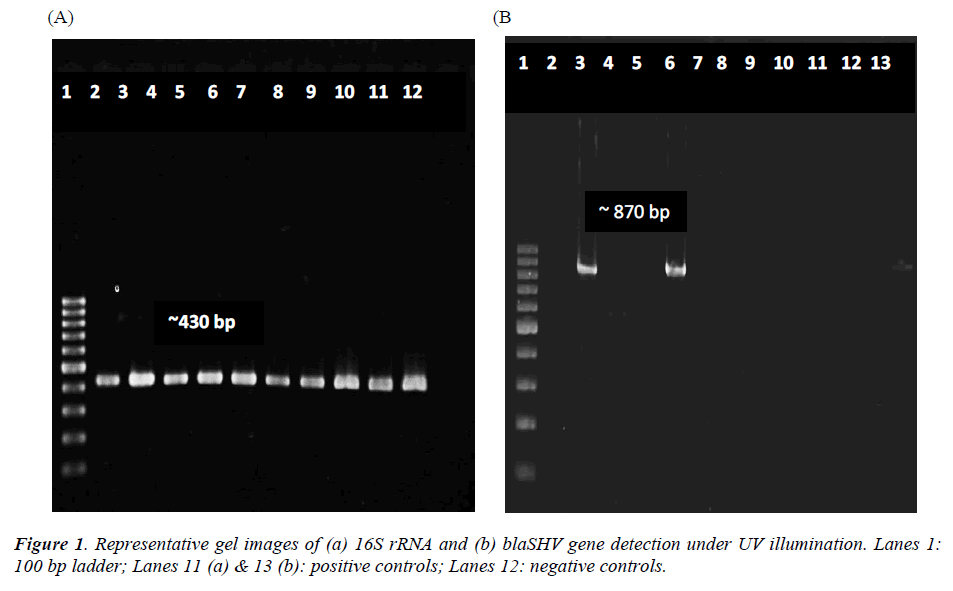 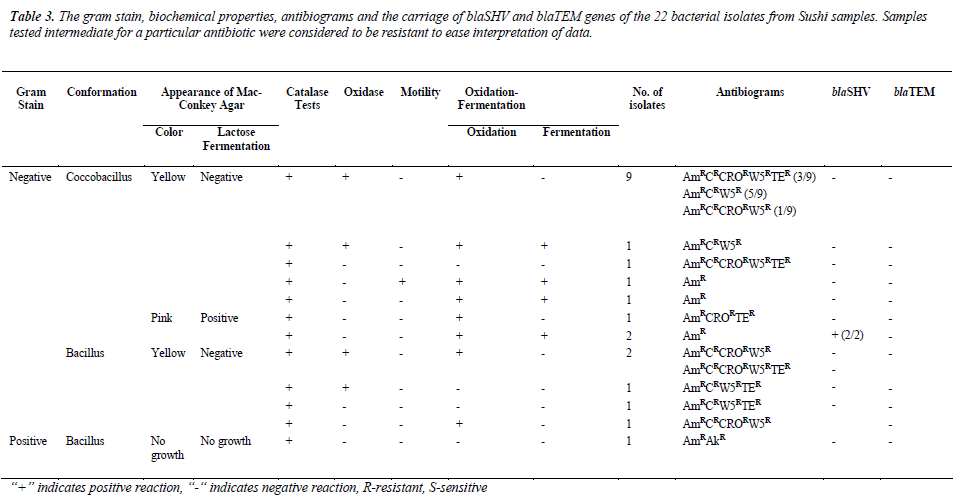 Table 3:The gram stain, biochemical properties, antibiograms and the carriage of blaSHV and blaTEM genes of the 22 bacterial isolates from Sushi samples. Samples tested intermediate for a particular antibiotic were considered to be resistant to ease interpretation of data.

In recent years, studies have demonstrated that the use of antibiotics in animals, aquaculture and most importantly, food production, is also a major factor which contributes to the emergence of antibiotic resistance in bacteria and the spread of antibiotic resistance genes [22-24]. From this study, two bacterial isolates, which were identified as R. ornithinolytica, were screened positive for presence of blaSHV. The results obtained here signified the presence of blaSHV gene in ready-to-eat sushi in Kampar which could easily transfer their antibiotic resistance genes to human. As suggested by Schjørring and Krogfelt [25], the resistant bacteria from food, such as animals, fish, plants, and vegetables that are consumed by humans can be a source of antibiotic resistant gene transfer via plasmids and transposons [23]. Indeed, a prominent example of food as a source of antibiotic-resistant bacteria in humans is the existence of the multidrug resistant extraintestinal pathogenic E. coli (ExPEC) that is responsible for many community-acquired urinary tract infections (UTIs) [26], including the outbreak of trimethoprim–sulfamethoxazole- resistant E. coli UTIs in women from the United States [27], and the community outbreak of clonally related extended-spectrum beta-lactamases (ESBLs) type CTX-M infections worldwide [28]. The sources of the strains responsible for the above outbreaks are linked to contaminated meat and other food.

The bacterial isolates which harbored blaSHV were not multidrug-resistant in their antibiogram, but they were resistant towards one particular antibiotic which is ampicillin. Nevertheless, the multi-antibiotic resistant bacteria isolates did not carry either blaSHV or blaTEM. This indicates that there could be other resistance genes other than blaTEM and blaSHV present which may be responsible for encoding the resistance, such as CTX-M. This resistance appears to have arisen through the initial transfer of the chromosomal β-lactamase gene from Kluyvera spp. to conjugative plasmids that have rapidly spread among members of the Enterobactericeae as well as other gram-negative bacteria [29]. Besides blaCTX-M, other genes related to β-lactamase have also been described. Two novel chromosomally-encoded Class-A β-lactamases, blaPLA and blaORN, from R. planticola and R. ornithinolytica strains were found to be closely related to the chromosomal β-lactamase of K. pneumoniae [30].

This study here reports the presence of blaSHV in R. ornithinolytica isolated from ready-to-eat sushi.To address antimicrobial resistance in the food supply, it is imperative that careful tracking of these foodborne associated antibiotic-resistant pathogens must be warranted in the future. It plays a critical step in understanding the link between administering antibiotics to farm animals and human illness and, ultimately to curb the development of antibiotic resistance.

The authors thank Department of Biomedical Science and UTAR for their support of this project.