Kruppel-Like Factor-4 (KLF4) and Glucocorticoids (GCs), as fundamental therapies in Interstitial Lung Disease (ILD), can both promote macrophage polarization towards the M2 subset, while there has been little evidence regarding whether KLF4 and GCs synergistically regulate polarization to induce lung tissue repair and enhance the activity of the Glucocorticoid Receptor (GR) pathway to ameliorate GC resistance. Macrophages were stimulated with Lipopolysaccharide (LPS) to induce an ILD model and divided into three cell lines: mKLF4 (KLF4 overexpression), shKLF4 (KLF4 knockdown) and negative control. Quantitative real-time PCR (qRT-PCR), ELISA and western blotting were used to evaluate the marker mRNA and protein expression of M1/M2 subsets as well as the marker protein expression of the GR pathway. M2 marker mRNA and protein levels were elevated in mKLF4 cells but reduced in shKLF4 cells when stimulated with Dexamethasone (DX). In addition, decreased M1 marker mRNA and protein levels in mKLF4 cells were observed in the study. Interestingly, M1 marker mRNA and protein levels in shKLF4 cells were both reduced. Regarding the effect of KLF4 on GR pathways, the upregulated and downregulated levels of the marker protein GR and Histone Deacetylase 2 (HDAC2) in mKLF4 and shKLF4 cells support that KLF4 and GCs cooperate to enhance the expression of GR pathway proteins. KLF4 and GCs act in concert to promote macrophage polarization towards the M2 subset and enhance the activity of the GR pathway to ameliorate GC resistance.

Interstitial Lung Disease (ILD), one of the most common respiratory disorders in elderly people worldwide, is characterized by progressive dyspnea and persistent dry cough [1]. A growing body of evidence suggests that the inflammatory response secondary to repeated injuries and Connective Tissue disease (CTD), such as Scleroderma (SSc), contributes to the development of ILD [2]. Recent work by Hu has shown that lipopolysaccharide (LPS) can induce acute lung injury and pulmonary fibrosis via specific pathways [3,4].

Systemic Glucocorticoids (GCs) are common drugs prescribed to treat ILD, especially CTD-ILD, and mainly work by restricting excessive inflammatory responses and immune overactivation via the Glucocorticoid Receptor (GR) signalling pathways [5]. However, long-term administration contributes to GC resistance [6], such that patients on GCs can develop decreased GC sensitivity and even resistance. Resistance is mainly associated with a constriction of the combination of GR and GCs stemming from various reasons [7,8].

While studies have evaluated the cooperative regulation of KLF4 and GR to maintain homeostasis in keratinocytes [12], there has been little evidence about whether KLF4 in macrophages and GCs could synergistically regulate polarization to induce lung tissue repair. In addition, no studies have been found regarding whether KLF4 in macrophages could regulate GR expression concomitant with GCs to ameliorate GC resistance.

In this paper, we subjected ILD macrophages with high and low expression of KLF4 (mKLF4 and shKLF4) to GC to examine whether KLF4 in macrophages synergistically regulates polarization with GCs and ameliorates GC resistance in ILD.

Wild-type murine macrophages (WT RAW264.7) were obtained from Professor Jihong Han of the Academy of Life Sciences, Nankai University, China. RAW264.7 cells were routinely cultured in Dulbecco’s modified Eagle’s medium (DMEM, Gibco) supplemented with 12% foetal calf serum (Gibco) and maintained in a conventional incubator (37ºC and 5% CO2). The culture was monitored daily, and subculture was performed when the cell density reached 80-90%. Cells in a good growth state and in the logarithmic growth phase were used in all subsequent experiments. All cells were induced with LPS to construct the ILD model. The final concentrations of LPS and Dexamethasone (DX) as macrophage stimuli were set as 1 μg/mL and 1 μM, respectively, according to previous results [13,14].

A KLF4 knockdown vector (KLF4-shRNA) was constructed by RNA interference [15,16]. Following transfection of the lentiviral vector into RAW264.7 cells, stable KLF4 gene silencing was realized in RAW264.7 cells (shKLF4). In addition, cells with the empty plasmid pLVX-mCMV-ZsGreen-PGK-Puro were used as the Negative Control (NC).

To evaluate the synergistic effect of KLF4 and GCs on macrophage polarization, we first measured the mRNA levels of signature genes of these two subsets. The iNOS, TNF-α and IL-1β genes have been implicated as mediators of the M1 subset, while Arg-1, TGF-β and IL-10 have been accepted as markers of the M2 subset [18,19].

Macrophages were lysed in Radioimmunoprecipitation Assay (RIPA) buffer with phenylmethylsulfonyl fluoride (PMSF) (Solarbio Co., Ltd.), and the concentration of protein was measured via the Bicinchoninic Acid (BCA) method. Proteins (20 μg/lane) were separated by 10% sodium dodecyl Sulfate Polyacrylamide Gel Electrophoresis (SDS-PAGE) and transferred to Polyvinylidene Fluoride (PVDF) membranes. Then, PVDF membranes were blocked with 5% nonfat milk at 37°C for 2 h and incubated with primary antibody for 2 h at 37°C or overnight at 4°C. The blots were then washed with Tris- Buffered Saline–Tween 20 (TBST) 3 times and incubated with secondary antibodies for 3 h at 37°C. Bands were detected using ECL Plus enhanced chemiluminescence reagent (Solarbio Co., Ltd.) and quantitated with ImageJ software (version 2.1.4.7 (National Institutes of Health)).

To determine whether there is a synergistic effect of KLF4 and GCs on polarization, CD80 and MHC-II proteins, and CD163 and CD206 proteins were detected as M1 and M2 proteins, respectively, according to recent studies [20,21]. In addition, GR and Histone Deacetylase 2 (HDAC2), crucial downstream signalling molecules in the GR pathway, were used to evaluate the activity of the GR pathway [22,23].

Statistical analysis and graph plotting were performed using GraphPad Prism software (version V7.0). Data are presented as the mean ± standard deviation. For comparisons among multiple groups, one-way Analysis Of Variance (ANOVA) followed by Tukey’s post hoc test was used. For those variables with non-normal distributions, the Mann-Whitney test was employed. Two- tailed P-values <0.05 were considered to be significant.

Verification of the mKLF4 and shKLF4 cell lines from the RAW264.7 cell line

Evaluation of the synergistic polarized regulation via marker mRNA levels

Evaluation of the synergistically polarized regulation via marker protein levels

The next section of our trial was concerned with the comparison of M /M marker protein levels. Western blot findings under regular culture conditions revealed a similar trend to that of M1/M2 mRNA levels (P<0.05, Figure S2). To investigate the effect of GCs on polarization regulation at the M1/M2 protein level, DX was added to mKLF4 and shKLF4 cells.

Evaluation of the synergistic polarized regulation via marker factor levels 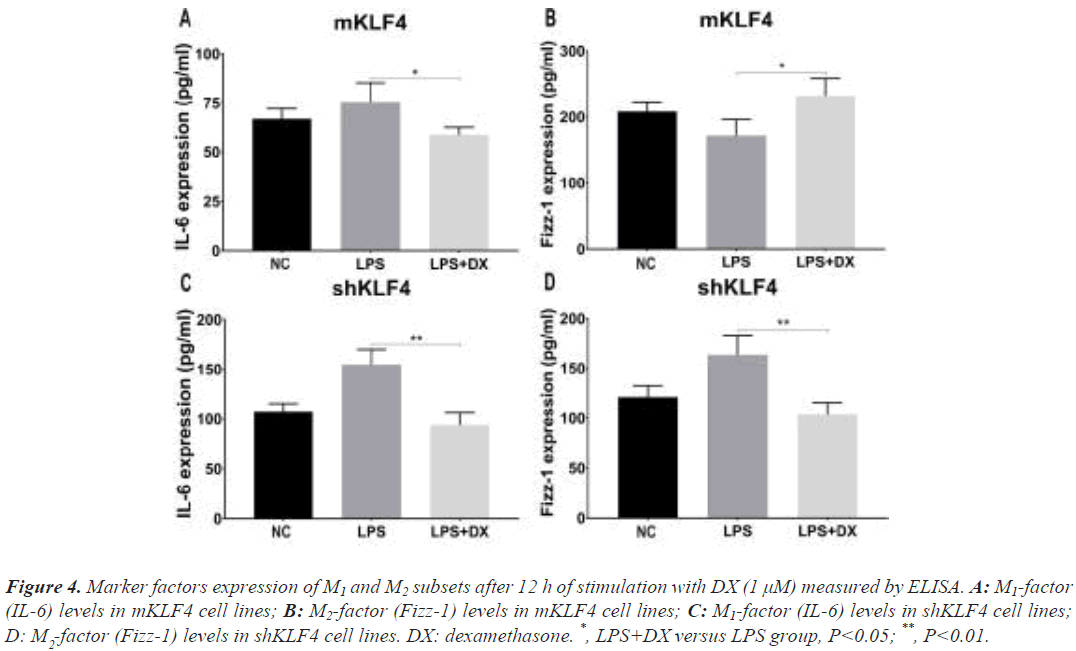 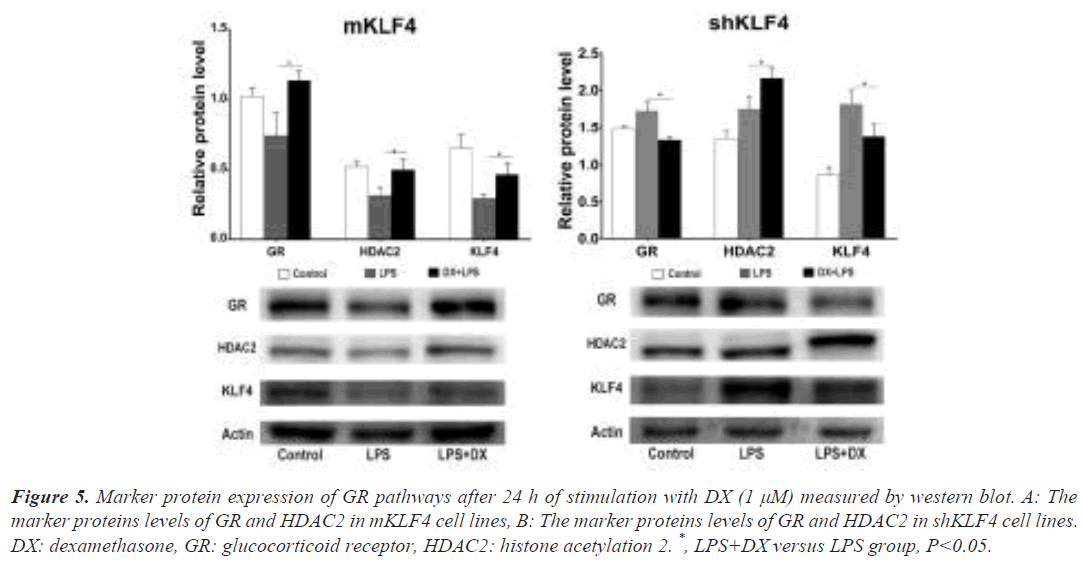 KLF4, as a critical transcription factor, contributes to inhibiting epithelial-mesenchymal transition in ILD and tissue repair by stimulating M2 polarization of macrophages [10,25]. In this study, KLF4 and GCs cooperated to regulate macrophage polarization towards the M2 subset and to upregulate the expression of GR pathway proteins, thus ameliorating GC resistance.

First, we validated the construction of the mKLF4 and shKLF4 cell lines via GFP and KLF4 mRNA expression levels [26]. The elevation and reduction in GFP in mKLF4 and shKLF4 cells were consistent with our expectation, which illustrates the elevated and decreased transfection efficiency and proliferative capacity in the two cell lines. Additionally, the mRNA expression of KLF4 presented a similar tendency to that of GFP. These data confirmed that macrophages with overexpression and knockdown of KLF4 were successfully constructed. In addition, it is important to mention that the following comparison was performed without the WT group, as the NC and WT groups demonstrated similar expression of KLF4.

With regard to macrophage polarization, mKLF4 cells exhibited higher levels of M2 marker mRNA, protein and factors, whereas shKLF4 cells displayed lower levels of M2 marker mRNA, protein and factors. These results corroborate the ideas of Liao and Saha, who suggested that overexpression and knockdown of KLF4 would promote macrophage polarization towards the M2 and M1 subsets [9,11]. GCs serve as the fundamental therapy in ILD and improve patient outcomes by repressing proinflammatory responses [5]. Previous studies evaluating GCs in ALI observed that GCs ameliorated ALI by promoting M2 polarization [27].

In light of these findings and to explore whether there is a synergistic effect between KLF4 and GCs in macrophage polarization and GC resistance alleviation, we treated mKLF4 and shKLF4 cells in the constructed ILD model with DX. The current study found that M2 marker mRNA, protein and factors were elevated in mKLF4 cells but were reduced in shKLF4 cells after stimulation with DX, which supports the hypothesis that KLF4 and GCs cooperatively polarize macrophages to M2 subsets to promote tissue repair. In addition, the decreased levels of M1 marker mRNA, protein and factors in mKLF4 cells are in accord with that hypothesis. A possible explanation for this might be that GCs inhibit the inflammatory response and regulate polarization via the STAT6 and GR pathways [28,29]. Additionally, the STAT6 pathway serves as one of the key pathways through which KLF4 regulates macrophage polarization [30].

What is surprising is that the levels of M1 marker mRNA, protein and factors in shKLF4 cells were reduced. This inconsistency may be due to the M1 subsets being mainly involved in the inflammatory response, while GCs inhibit inflammation by repressing the activation of inflammatory factors [31,32].

As mentioned previously, DX could promote macrophage polarization by mediating inflammatory factors through GR pathways [29]. Once macrophages are stimulated by external stimuli, the intracellular activated NF-κB pathway gives rise to enhanced histone acetylation, and large amounts of proinflammatory factors (such as TNF-α, IL- 1β, and MMP-9) are released. Under normal conditions, the addition of corticosteroids successively activates GR and upregulates the expression of HDAC2, which can suppress histone acetylation and induce the transformation to the M2 subset. However, abnormal conditions (severe infections, GC resistance, etc.) resulted in suppression of the activity of the GR pathway and enhancement of the activity of the NF-κB pathway even after stimulation with corticosteroids (Figure S5). Ultimately, the burst of inflammatory factors displays an “inflammatory response waterfall” [33,34]. Several lines of evidence suggest that GC resistance is attributed to decreased GR levels, reduced ligand affinity and restricted nuclear translocation [23,35].

Regarding the effect of KLF4 on GR pathways, the up regulated GR and HDAC2 levels in mKLF4 cells under regular culture conditions in our study primarily support that KLF4 could enhance the activity of GR pathways, thus mitigating GC resistance. Furthermore, marker protein expression of GR pathways followed by stimulation with DX was up regulated and down regulated in mKLF4 and shKLF4 cells, respectively. These outcomes confirm that KLF4 and DX cooperate to enhance protein expression of GR pathway members and enhance GR pathway activity, which mitigates GC resistance to some extent. In addition, these findings may provide further support for the hypothesis that KLF4 regulates macrophage polarization via the GR pathway, but this fact remains to be studied.

Our research also has several limitations. First, the primary study was solely conducted in vitro, and we are currently looking at further research using in vivo systems. Second, luciferase assay experiments were not performed to explore whether KLF4 works through the GR-HDAC2 pathway. Last, more studies are needed to explore and validate the mechanism of the cooperative amelioration by GCs and KLF4.

This study validated that KLF4 synergizes with GCs in promoting macrophage polarization towards the M2 subset, which may function via the GR signalling pathway. The second major finding was that KLF4 and GCs act in concert to enhance the expression of GR pathways and ameliorate GC resistance.

HYS and LS conceived and designed the experiments then DWY and HYS performed the experiments. In addition, HYS and DWY analyzed the data and wrote this paper, finally LQW and LS gave some critical revision of the manuscript. All authors read and approved the final manuscript.

This study was supported by Natural Science Foundation of Tianjin Province of China (No. 18JCYBJC26600).

We would like appreciate our gratitude to Professor Jihong Han in Academy of Life Sciences, Nankai University who donate the RAW264.7 macrophages to us.