Knowledge regarding HIV/AIDS and views on HIV testing before marrying migrant workers among rural higher secondary school students in Bangladesh.

The social context of Bangladesh does not permit adolescents to discuss reproductive health topics as well as sexually transmitted diseases like HIV/AIDS openly with their parents, teachers, or other senior members of the community. The objective of this crosssectional study was to investigate knowledge regarding HIV/AIDS and views on HIV testing before marrying migrant workers; among rural grade 11 and 12 students in Bangladesh. A total of 92 students completed anonymous, self-administered questionnaire. The average age of the students was 16.8 ± 0.9 years. All the students had heard about AIDS before they completed the questionnaire. Media (75%) was the main source of information. Overall, students had average knowledge regarding selected aspects of HIV/AIDS. A high (>73%) proportion of the students were conversant with the major modes of spread of HIV. Many misconceptions were still noted relating to HIV/AIDS: 40% believed that healthy looking persons cannot be infected with HIV while 27% and 25% believed that coughing/sneezing and mosquito bites spread AIDS, respectively. Majority (75%) of the students indicated that they would not ask to do HIV test before marriage and amongst them more than a quarter reasoned that it might lead to a break-up in the marriage or that marriage might not take place. The knowledge level appeared to be low and misconceptions held about the routes of transmission were common. It is recommended that strategies for AIDS-risk reduction among adolescents be developed in Bangladeshi high schools.

HIV epidemic is a global crisis. It poses a serious challenge to development and social progress. In Bangladesh, the first case of HIV/AIDS was detected in 1989 and by the end of year 2009, an estimated 6,300 adults and children were living with HIV [1] (A more updated report about year& figure is expected, if available). Bangladesh is a low HIV prevalence country (rate <0.1% in general population) despite the presence of the risk factors such as low level of HIV/AIDS knowledge, multiple sexual partners, low level of condom usage, high incidence of sexually transmitted diseases, unsafe blood, and risk of transmission from returned migrant workers [1–8].

According to the National AIDS/STD Program report, a cumulative total of 2,088 HIV cases, and a total of 343 new cases, 231 AIDS cases and 37 AIDS-related deaths occurred in 2010 [9]. (Sentences do not begin with ‘but’) However, Bangladesh remains extremely vulnerable to an HIV epidemic, because of its dire poverty, overpopulation, gender inequality and high levels of transactional sex. It is reported that without any intervention the prevalence in the general adult population could increase to 8% by 2025 [10].

In Bangladesh, the most risk groups to HIV infection are injecting drug users (IDUs), sex workers, homosexuals, and migrant workers [3–5]. Studies have reported that HIV prevalence among IDUs was 1.2%. Between 20,000 and 40,000 people inject drugs, most of them are sexually active and on an average they have two partners [4, 5, 8]. It was reported that HIV prevalence was 0.3% among female sex workers and transgender (hijras) and much lower among homosexu als [9]. UNPD reported that 57 of the 102 newly reported HIV cases in Bangladesh were among returning migrants [11].

In a recent study, it was revealed that by the age of 21, one-third of the unmarried Bangladeshi youths became sexually active and among them, less than 30% used condom for their most recent sexual encounter [12].

A baseline study conducted by International Centre for Diarrhoeal Diseases Research-Bangladesh, reported that only 16% of girls aged between 15 and 24 have a comprehensive knowledge of HIV in Bangladesh [13]. The same study also highlighted high level of misconception among youth, as more than half believed that HIV/AIDS can be spread by coughing or sneezing and 50% believed that HIV can spread through sharing of food or water with a HIV infected person [13].

Bangladeshi adolescents, however, have less access to different sources of information. The social context of Bangladesh does not permit adolescents to discuss reproductive health topics as well as sexually transmitted diseases like HIV/AIDS openly with their parents, teachers, or other senior members of the community [14]. In addition to that, young people do not make use of the existing health centres for sexual and reproductive health problems and preventive measures are not easily available to them [15]. Lack of education about how AIDS is transmitted and prevented is the primary weapon against AIDS, because there is no treatment or vaccine to prevent its spread. Therefore, this study aims to investigate knowledge regarding HIV/AIDS and views on HIV testing before marrying migrant workers among rural grade 11 and 12 students in Bangladesh.

A cross-sectional study was conducted in December 2011 in two colleges in the district of Rajbari; which is about 200km from the capital city Dhaka. All the grade 11 and 12 students of each college who were present in the classroom on the day of the researchers’ visit, agreed to participate. Data were collected and knowledge was assessed using an 18-item self-administered anonymous questionnaire, which included knowledge on ways of risk reduction for HIV transmission, predisposing risk behaviour and practice to HIV, treatment of AIDS, and prevention methods of HIV and source of knowledge and views of testing for HIV before marrying someone working or has worked overseas.The last section was regarding students’ views on acceptability of sex before marriage. Pre- test of questionnaire was done on ten students and the result was used to improve the phrasing of questions in the questionnaire.

For knowledge, each right answer was given a score of 1 while a wrong or unsure response was scored 0. Total knowledge scores ranged between 0-18. Scores from 0 to 9 were considered as poor knowledge while scores > 9 was considered as having good knowledge regarding HIV/AIDS. The last section included questions regarding their views on asking to do HIV test before marrying migrant workers.

Generally students had average knowledge regarding selected aspects of HIV/AIDS (Table 1). Thus, a high (>73%) proportion of students were conversant with the major modes of spread of HIV and with utility of condoms in preventing HIV infection. Nonetheless, less than half of the students knew that at present, AIDs is incurable and a quarter knew about prenatal contact from mother to foetus. Only 6.5% of the students reported that sexual abstinence can prevent them from getting HIV.

However, many misconceptions were still noted relating to HIV/AIDS, with 9% of students believing that children would never be affected by HIV/AIDS, 40% believing that healthy looking persons cannot be infected with HIV, the virus that causes AIDS, 27% and 25% believing that coughing/sneezing and mosquito bites spread AIDS, respectively. Both sexes of the students were equally misinformed about the risk of getting HIV by mosquitoes and sharing of equipments while more girls believed that HIV/AIDS was curable. 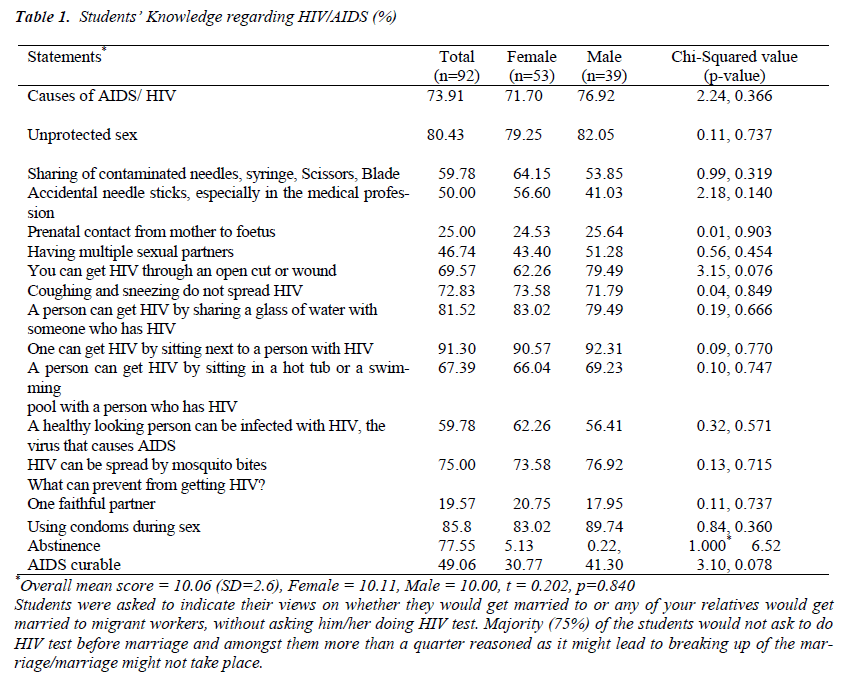 This study investigated grade 11 and 12 students’ knowledge and perceptions regarding HIV/AIDS. The significant findings of the study was that all the students who participated in the study had heard about AIDS. This result is higher than a previous study conducted among female adolescents in Bangladesh; which reported that only 55% had heard about AIDS [16]. This finding is similar to studies conducted among Secondary school adolescents in Nigeria (93%) and preparatory high school Students in Ethiopia (100%) [17, 18]). This encouraging finding should be further strengthened by establishing HIV/AIDS youth clubs in the study area.

The media (television, radio, and newspaper) constitute the most important modes of dissemination of information about HIV/AIDS. This is similar to studies conducted among Ethiopian and Iranian students [18, 19]. Studies conducted in Southeast Asia reported that most media have done little to change existing cultural values regarding people who are living with HIV or AIDS and very few had given enough in-depth information to contextualize this information [20]. Media can play a significant role by applying new methods of AIDS education to improve public awareness about HIV/AIDS. In this study, one in five students obtained information about HIV/AIDS from their teachers. This finding emphasizes the need to improve the role of teachers in HIV/AIDS awareness programmes. This is very important because educating school children about safe sex is one of the most significant ways of postponing the onset of sexual activity among them [21]. Researchers have highlighted that intervention programmes providing sex education in schools have been reported to result in a marked improvement in the knowledge of students about HIV/AIDS and have been associated with a positive change in their attitude towards the disease [22].

Overall, the study revealed a considerable lack of knowledge about HIV/AIDS among students. This finding is in line with the study conducted in China which indicated an overall low and inconsistent level of AIDS knowledge among secondary school students [23]. A study used data from the Bangladesh Adolescents Survey 2005 to identify socioeconomic and urban-rural determinants of knowledge regarding sexually transmitted infections (STIs) including HIV/AIDS transmission reported contrasting results as HIV/AIDS knowledge level was high (Gani et al, 2011 [24]). Female students were found to have a slightly higher level of knowledge in comparison to male students but this difference is very minimal and insignificant but consistent with the studies conducted among school students in Iran, Nigeria, and Israel [17, 19, 25]. However, an Indian study reported that boys had better knowledge than girls, the reason being that boys feel freer than girls to talk about matters relating to sex and HIV/AIDS [22].

This study found many misconceptions about how HIV is transmitted, e.g. coughing and sneezing, sharing drinking water, sitting next to a HIV positive person, using public swimming pools, mosquito bites etc. A Chinese study reported that a large proportion of students held misconceptions regarding symptoms, activities that did not transmit the virus, treatment and preventive measures [23]. Similar results were also found among Nigerian and Etiopian students [17, 18]. In the present study, a considerable proportion of respondents thought that there is a cure for AIDS. This is consistent with the study conducted in India and can be attributed to the many false claims published in media and other modes of advertisement [22]. Thus, the media has a daunting task regarding HIV/AIDS as they should provide accurate, authoritative and compassionate reports.

Bangladesh is a labour surplus country. According to the estimates of the Bureau of Manpower Employment and Training, the executive agency for processing labour migration, the average number of outsourced migrant workers has grown from 225,000 in the 1990s to 879,952 in 2008 [26]. They are predominantly male. The risk is that they might get infected during their stay abroad and after their return to Bangladesh may transmit the virus to others, especially their wives, who would in turn transmit the infection to their babies. However, in recent years increasing number of women are also migrating to other countries as contractual workers [26]. Majority (75%) of the students in this study reported that they would not ask the boys to do HIV test before marriage and amongst them more than a quarter reasoned that by asking to do HIV test the marriage might not take place. There is sufficient evidence of high rates of HIV transmission to wives from their migrant husbands after their return from abroad. It is reported that more than 80% of the diagnosed HIV positive people are migrant Bangladeshi workers and their wives [27].

The study, however, has several limitations. First of all, in an Islamic-religion-based society like Bangladesh, the researchers are restricted in asking questions concerning students' sexual beliefs. Secondly, the results of this study may only be generalized to similar population of students. They may not be applicable to adolescents who are not attending school. Thirdly, because of the self-reporting nature of the questionnaire, the honesty of students' responses may be questionable. However, the questionnaire was anonymous, which should have encouraged accurate and honest self-disclosure.

The media; which is the main source of information, should create and spread awareness about all aspects of AIDS among the youth and students of Bangladesh. There is considerable rationale of making HIV/AIDS education an integral part of high school curriculum as there are many misconceptions existing among the students. Therefore, it is very important for continued and strengthened health education to bring about the change in knowledge with regard to HIV and other STDs, and behavioral changes among the students in Bangladesh.

The author would like to thank the participants in this study.

There is no conflict of interest in this study.