Background: Spina bifida is one of the most challenging and partially preventable congenital diseases that can be prevented with adequate amounts of folic acid (FA) intake before conception and throughout the first few months of pregnancy. Knowledge about the adequate timing and duration of FA intake is critical for prevention.

Results: There were 1,366 participants, of whom 11% were HCS, 59% were NHCS, and 30% were “others”. Across all tested domains (i.e., spina bifida awareness, FA intake time and duration, diseases prevented by folic acid intake, and food rich in folic acid), it was found that statistically significant differences existed. The results showed a highly significant lack of knowledge towards the aforementioned domains in both the NHCS and “others” groups. Marital status and number of children were independent variables and showed statistically significant differences in knowledge toward the tested domains.

The management of myelomeningocele (MMC), also known as spina bifida, remains a challenge for all medical providers [1]. Preventing this disorder is possible via food fortification and adequate amounts of folic acid (FA) intake before conception and throughout the first month of pregnancy. However, this preventive method is not effective for hereditary types of myelomeningocele [2].

Multiple studies [3] have been conducted over the last decade to explore the prevalence of MMC in Saudi Arabia; however, the numbers have not significantly changed between 1997 and 2009, with prevalence rates ranging from 0.8-1.46 [4].

This is in spite of policy developments surrounding FA fortification in some foods, as adopted in Saudi Arabia in year 2000 [4,5].

Based on the numbers given in previous studies, 780 children are expected to be born with MMC in Saudi Arabia each year [6]. As such, the Ministry of Health in Saudi Arabia adopted a policy whereby all pregnant women are given FA during pregnancy; however, one of the main problems faced is that women end up taking FA after the most critical period (i.e., at w 4-8 of pregnancy), at which point neural tube formation takes place [7]. Several studies have shown that despite implementing this policy, whereby FA is provided during pregnancy, only 4%-8.3% of Saudi women actually take FA during pregnancy [3,8].

Kari et al. as well as other researchers, have shown that a high percentage of educated women (88%) were unaware of the importance of FA in preventing neural tube defects (NTDs) in western Saudi Arabia [9]. Compared to other western countries, the incidence of NTDs in the Asir region appears to have remained static over the years, a situation which necessitates further investigation and analysis [10].

This questionnaire-based study was conducted with female college students and employees at King Khalid University, Abha, Saudi Arabia, to evaluate their awareness of FA intake during pregnancy and its relationship with the development of spina bifida. The questionnaire (Figure 1), which asked questions related to the importance of FA intake in preventing NTDs (specifically, spina bifida), was distributed among college students. After obtaining ethical approval from the institutional review board (IRB) at King Khalid University, the study was carried out while maintaining participant confidentiality. The questionnaires included participant demographic-related questions, as well as questions related to the participants’ knowledge of FA and its sources. The questionnaire included questions on the optimal time to take FA in order to prevent NTDs, the appropriate dose of FA required, the best sources to get the recommended dose of FA, and the participants’ attitudes toward FA intake. The target population was female college students from 8 different women’s colleges; there were no exclusion criteria. The educational materials (lecture, leaflets, and posters) were offered to more than 3,000 subjects following data collection; these were part of a regional awareness campaign conducted within the Asir region. 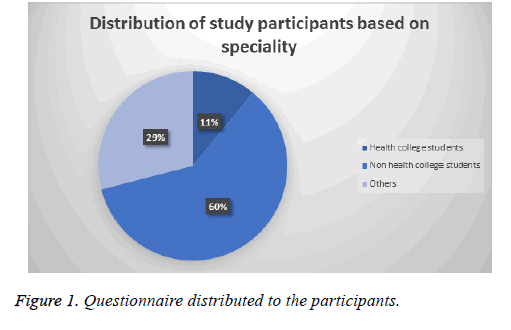 Figure 1: Questionnaire distributed to the participants.

A total of 1,366 participants were involved in our study. A structured data sheet was created to aid in data collection. Data were categorized, coded, and processed with SPSS software (IBM Corporation, Armonk, NY, USA). Continuous variables were expressed using means and standard deviations, and categorical variables were expressed using frequencies.

Table 1. Socio-demographic characteristics of the sampled females according to specialty. 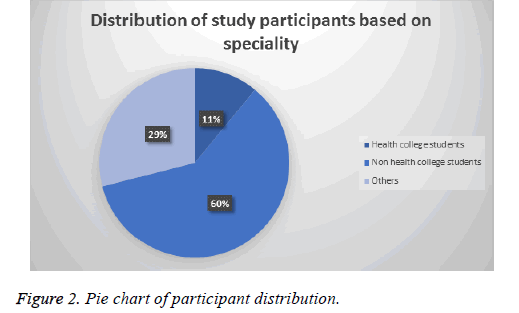 Participants’ mean overall knowledge scores related to FA and spina bifida were low in all three groups; however, the HCS group had a relatively higher score (P<0.0001).

When exploring the questionnaire results further, it was found that only 34% of those in the NHCS group were aware of FA, 35% knew that FA should be used during pregnancy, while only 14% had heard of spina bifida, and only 7% knew of foods rich in FA.

Participants’ knowledge on the duration of FA use during pregnancy was 58% among those in the HCS group and 29% for those in the “others” group; this difference was highly significant (P<0.0001).

The question on when women should start taking FA was unfortunately answered poorly, even among those in the HCS group, where only 16% of participants provided a correct answer-specifically, that FA must be used before conception. Similar results were seen among those in the NHCS and “others” group at 15% and 14%, respectively (P=0.75).

We investigated whether having children or not had an impact on FA knowledge. It was generally found that there was no significant difference between those who had children versus those who did not across the various FA-related domains, such as FA intake timing and knowledge of FA-rich foods. However, having a disabled child or relative was significantly associated with FA knowledge across all domains. In terms of numbers, the level of knowledge about the importance of FA intake among those with children was 49.4% compared to 46.4% of those without children (P=0.44) (Table 2). Moreover, 55% of participants who had children, were aware of FA intake timing, while 56% of females who do not have children, were aware of this information (P=0.57). Further, 37% of women with children were knowledgeable about FA-rich foods, whereas 32% of women without children were aware of the same (P=0.2) (Figure 3).

Table 2. Relation of folic acid knowledge with presence of children among married group and presence of disabled child and or relative among study group. 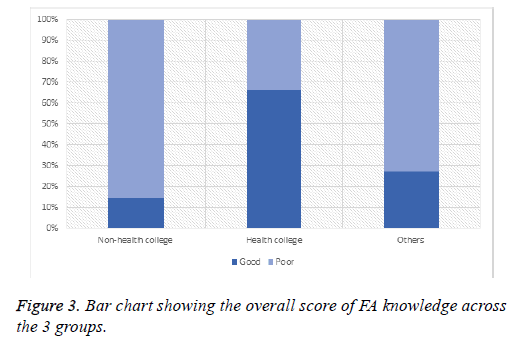 Figure 3: Bar chart showing the overall score of FA knowledge across the 3 groups.

Again, when exploring whether having children or not had an impact on FA knowledge, it was found that only 9.7% of subjects with children were aware of diseases prevented by FA, whereas 4.9% of subjects without children were aware of these diseases (P=0.01). Conversely, 10.8% of those with a disabled child or relative and 7.1% of those without a disabled child or relative had prior knowledge of FA deficiency-related diseases (P=0.05).

Moreover, participants’ knowledge of spina bifida was also assessed and the results revealed that only 22.6% and 26.8% of subjects with children and those with a disabled child or relative, respectively, were aware of this birth defect; this difference was significant (P=0.04).

Despite the abundance of materials and social media-related content on FA, as well as the implementation of awareness programs adopted by health authorities in Saudi Arabia, there seems to be a lack of FA-related knowledge among females in Saudi Arabia, even among those who are highly educated.

Many previous studies conducted in Saudi Arabia, such as those by Al-Akhfash et al. [11] showed that a strikingly low number (8.3%) of females who had a previous history of delivering children with congenital anomalies were taking FA during pregnancy. Another study conducted by Alshail et al. [12] who performed their research in one of the major hospitals in Saudi Arabia in 2014, had involved more than 600 patients. The authors found that only 5% of Saudi females were taking FA during pregnancy. Our study produced similar numbers; however, we expected a higher level of knowledge related to preconception care, especially among highly educated women and in the context of the social media storm and the abundance of information technology. Compared to other studies conducted at the King Khalid University Hospital in Riyadh, our results showed that there was a lack of knowledge of FA and NTDs among Saudi women, even among highly educated college students [13].

Our results were similar to those from another study conducted at King Abdulaziz University Hospital, Jeddah. In that study, hospital patients were interviewed and the researchers found that there were higher rates of knowledge about FA was significantly higher in women at their late reproductive period, and among those who receive higher level of antenatal care, and advanced maternal age in their study population [14].

Moreover, population statistics are also reflective of the low knowledge levels related to FA intake during pregnancy. Specifically, most Saudi females (66%) reported starting FA when they realized that they were pregnant. By this time, they had passed the critical period of neural tube formation, which is a major concern, especially for unplanned pregnancies [15].

There is a pressing need to educate young females of childbearing age about healthy practices in terms of vitamin and FA intake, even before marriage [16]. In fact, a lack of education and lower rates of planned pregnancy was the main contributors to the static (and low) rates of FA intake among women in Saudi Arabia over the past 12 years [12].

Since 2012, progress has been made in terms of reducing the development rates of FA-preventable spina bifida worldwide, although this rate reduction is still low at 13.2 as per 2015% [17]. Additional efforts must be made to increase the level of awareness and implementation of highly specialized health education programs to young females. These initiatives should incorporate information on preconception care, especially in terms of the development of NTDs and the associated burden.

An in-depth review by Kelly et al. found that FA awareness and the level of knowledge of the benefits of FA was relatively low among women of childbearing age in the years spanning 1998-2010. The authors found that advanced levels of FAAlnaami related knowledge were associated with higher education levels and household income [18]. Similarly, Eghwrudjakpo et al. found that amongst women of reproductive age in a tertiary health institution, the level of awareness of the role played by FA in the prevention of NTDs was variable. Specifically, 94.4% of participants had some knowledge about FA, whereas 29.6% knew something about NTDs. This reiterates the need to enhance women’s awareness of FA-related information to ensure that at-risk populations benefit and reduce their chances of facing NTD development in their offspring [19].

Strengths of the study

There are multiple strengths of this study. First is the fact that it targeted highly educated women, while many of the previous local studies described earlier targeted the general population. However, in our study, we showed that a gap exists in terms of FA-related knowledge, even among highly educated women, as exhibited by those in the NHCS group (even when compared to the “others” group) and another strength is the large number of study subjects. This investigation is considered to be one of the largest local studies, which increases the generalizability of our results to the general Saudi population.

The study shares the limitations commonly faced when conducting questionnaire-based studies, such as whether all participants were able to understand all questionnaire items, whether subjects provided truthful answers, and a lack of validity. However, the authors believe that performing the study with highly educated participants, as done here, may have helped to overcome some of the limitations mentioned above.

There should be greater attention and efforts made to educate women of child bearing age in Saudi Arabia on the importance of FA in preventing spina bifida burden. The results of this study provide compelling evidence in support of a mandate to educate women further by incorporating FA intake-related information in their education curricula in junior-high and secondary school.