Knowledge and attitude about reproductive health among rural adoles-cent girls in Kuppam mandal: An intervention study

Adolescents in rural areas may face troubles due to lack of right kind of information regard-ing their own physical and or sexual developments. The need to address this problem through health education by health professionals needs to be ascertained. The objective is to determine the effectiveness of a reproductive health education intervention programme in improving the knowledge of adolescent girls aged between 14-19 years in Kuppam mandal, chittoor dt, Andhra Pradesh. The study was carried out over a period of 8 months. A total of 656 girls in the age group of 14-19 years were randomly selected from 3 high schools (class X) & 3 intermediate colleges(class XI &XII) in kuppam mandal, chittoor dt, Andhra Pradesh. The reproductive health education package developed in consultation with par-ents, teachers & adolescents was used to educate the girls. A 50 item structured question-naire was used to test the knowledge of all the participants about the reproductive health be-fore & after the education session. The data was tabulated & analyzed using SPSS version 11.0 for windows .Findings were described in terms of proportions & percentages, chi square test was used to test the effect of intervention. Reproductive health Knowledge score improved significantly after intervention. A significant increase in overall knowledge re-garding menstrual cycle, ovulation, fertilization & pregnancy by 44.5% was noted (95%CI=42.5,46.5;P<0.001); knowledge regarding contraception improved remarkably from 33.7% to 97.4%(P<0.0001);A significant improvement in the knowledge about trans-mission & prevention of STDs was noted after intervention (P<0.0001). A reproductive health education intervention programme improves the knowledge & attitude among rural adolescent girls regarding reproductive health

Adolescents are an important resource of any country. According to the WHO expert committee, adolescence is defined as the period between 10-19yrs, the 2nd decade of life [1].Adolescents comprise 20% of the world’s total population [2].out of 1.2 billion adolescents world-wide,about 85% live in developing countries [3].In India there are 190 million adolescents comprising 21% of In-dia’s total population [4].Adolescent pregnancies consti-tute 10-15% of total pregnancies in India.This is largely attributed to early marriage,a culture widely prevalent in the whole of Indian subcontinent,besides Africa [5]. The age at marriage is quite low in rural areas & adolescent girls in these communities fall into fertility trap quite ear-ly. These situations predispose girls to teenage pregnancy that may have more immediate effect on their life than any other problem [6].The changing moral & social val-ues and shift in the standard of societal behavior from conservatism to liberal interaction between both sexes is attributed largely to exposure to the media especially tele-vision and movies. Adolescents find themselves sand-wiched between a glamorous western influence and a stern conservatism at home, which strictly forbids discus-sion on sex. This dichotomy aggravates the confusion among adolescents [7]. This has led to increase in pre-marital sexual activity, pregnancy among unmarried girls apart from the increasing incidence of abortion & STDs [8,9]. Among adolescents, girls are particularly vulner-able, not only because they are more likely to be coerced invariably for unprotected sex than Boys, but also they are more susceptible biologically to STDs including HIV infection [10].

In order to lead a healthy, responsible & fulfilling lives & protect themselves from reproductive health problems youngsters need to be knowledgeable about themselves & need adequate information about the physical, psycho-logical changes that take place during puberty, menstrua-tion, pregnancy & child birth [11]. The need to address these problems through reproductive health education has been recognized at various national & international fo-rums. Among the several options available, creating awareness among adolescents appears to be an important tool [13]. However adolescent education programmes in India face many challenges. A lot of debate is going on about how much of the reproductive health contents should be taught? Whether teachers should impart this knowledge or should it be imparted by health profession-als [9,10].

The study was taken up keeping in mind that Kuppam being a small town comprising predominantly of rural population,the study population represents rural adoles-cent girls from southern India.The knowledge & aware-ness levels about reproductive health among rural adoles-cent girls may not be similar to that of their counterparts from urban areas. The need for this study was felt consid-ering the fact that many studies on reproductive health education intervention had focused on urban popula-tion,slums in cities etc.,but none from a rural area.In addi-tion to this,Andhra Pradesh has the second highest num-ber of HIV cases in the country,with a prevalence of 0.90% [14,15] & the prevalence is high in the 15-45 years age group(88.7% of all cases) indicating that assessment of knowledge & awareness levels about reproductive health among adolescents is an important issue based on which the education intervention program can be decided.

This was an intervention study & the study population included girls from 3 intermediate colleges (class XI & XII) & 3 high schools (Class X) of Kuppam mandal in Chittoor district(Andhra pradesh).The demographic pat-tern according to census 2001,shows that females consti- tute about 49% of the total population with agriculture as the main occupation.The female literacy rate is about 58% & that of males is about 75%.Kuppam mandal(taluka) consists of several villages & majority of the students travel to kuppam for schools & colleges. The sampling design was a stratified cluster sampling. The students were stratified on the basis of the year (class X, XI, XII). Each division in a stratum was taken as a cluster. A clus-ter of 40 to 50 students was found to be feasible for inter-vention. Of the 22 clusters, 15 clusters were randomly selected and considering a dropout rate of 10% and design effect of 2, a total of 656 students were included in the study. Willingness to participate in the study was obtained by a verbal consent from the students after taking written consent and requisite permission from school and college principals after explaining the objective of the study. To ensure confidentiality students were asked not to furnish their names.

In consultation with parents, teachers and adolescents, contents of the reproductive health education were final-ized. It was designed to cover the gaps in the knowledge of the adolescents keeping in view the age group of the adolescents and the cultural sensitivities of parents and teachers. The contents included anatomy and physiology of male and female reproductive system, physical and psychological changes during puberty, adolescence, con-ception and contraception, STDs including HIV/AIDS, using a simple language and culture sensitive terms.

A total of 656 adolescent girls participated in the pre-test assessment. A pre tested 50 item structured questionnaire was administered, which tested the knowledge and per-ceptions of the study population on puberty changes, menstruation, maintaining hygiene during menstruation, regarding ovulation and fertilization, conception, changes during pregnancy, antenatal care, and also on contracep-tion and STDs.

A health education programme was organized in 6 ses-sions, each session lasting for two hours on 6 consecutive days. Programme included a didactic lecture by one of the educators followed by interactive sessions. Audio visual aids such as power point presentation using LCD projec-tor, video films, charts, posters were used. The topics in-cluded were on anatomy and physiology of male and fe-male reproductive system, physical changes during and after puberty, menstrual cycle, pregnancy, antenatal care, various methods of contraception. The lectures were fol-lowed by interactive session with the students.

Table 1 shows the demographic profile of the study popu-lation of the 656 students 554 students were in the age group of 16-17 years with a mean of 16.68 years .Table 2 shows that the students’ knowledge about puberty changes improved significantly after intervention (p<0.005). Students had a good knowledge regarding age at first menses and maintaining hygiene during menses at pre-test. About 49.5% of the students were not aware about ovulation. Their knowledge about ovulation im-proved from 49.5% to 96.1% (p<0.001), and regarding menstruation & menstrual hygiene, improved signifi-cantly from 78.3% to 96.4% and from 92.5% to 98.9% respectively after intervention (p<0.005). Table 3 shows that only about 74.2% of participants were aware about missed period as the first sign of pregnancy.The interven-tion significantly improved participants’ knowledge (p<0.001). 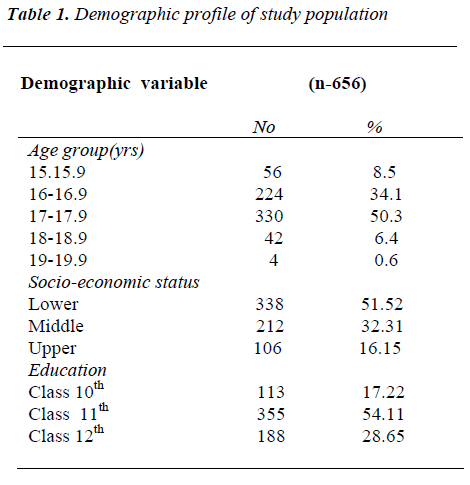 Table 4 shows that awareness of students regarding dif-ferent contraceptive methods. It was observed that their knowledge was poor during per-test and remarkable im-provement was noted following intervention (p<0.0001) 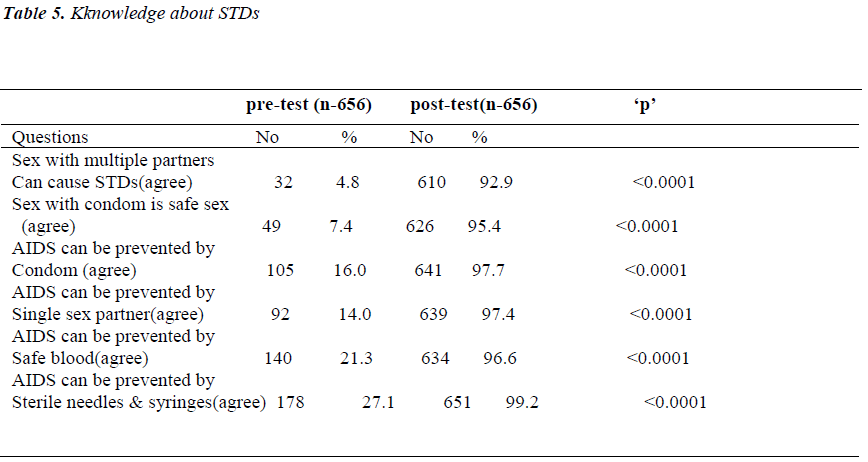 This study evaluated the effect of health education by health professionals on adolescent girls’ knowledge and attitudes towards reproductive health. Remarkable im-provement was seen with relation to knowledge of par-ticipants about puberty, menstrual cycle, pregnancy, con-traception and also transmission and prevention of STDs. Various studies have shown the effectiveness of interven-tion in increasing the knowledge of reproductive health [12,13,16,17]. Studies conducted in developed countries have also shown that girls have good knowledge & use contraceptives to prevent unwanted pregnancies[22]. The present study indicates that the adolescent girls in rural areas are still ignorant about many aspects of reproductive health especially regarding contraceptive methods. The findings of this study regarding awareness of girls about contraception concur with findings of some of the other Indian studies [19,20,21]. Similar findings have been noted in other developing countries as well [18,22,23].

A comprehensive adolescent reproductive health program can provide right information at right age. Teachers in schools and colleges often find it difficult to discuss the topics related with reproduction. It is commonly observed that they ask students to read these topics on their own from the text book. They are often unable to break the barrier of hesitation. Parents’ position in this regard is more sensitive. They also lack the confidence and skills to address the psychosocial and sexuality related prob-lems of adolescents. Reproductive health education by a health professional has become acceptable for adolescent girls in urban areas, however acceptability in rural areas and among non school-going adolescents need to be as- certained before universal application of the proposed reproductive health education package [16]. Intervention in the form of health education increases the awareness level among adolescent girls especially in rural areas like Kuppam where majority of them belong to low socio eco-nomic status, thus empowering them to take care of their own health as well as protect themselves from possible health problems like unwanted pregnancies, risk of STDs in their future life

This study suggest that reproductive health education by health professionals can improve the knowledge and per-ceptions of adolescent girls especially in rural areas. Such educational intervention programs must be given due im-portance, which will help the adolescent girls to take care of their own health and protect themselves from the risk of STDs etc.

Limitations of the study:

The study has certain limitations in terms of sample size. There is need for more such studies particularly from ru-ral areas, as the assessment of knowledge and awareness is crucial before initiating educational intervention pro-grams,especially in states like Andhra Pradesh where the prevalence of HIV cases is quite high, to educate the peo-ple from an early age.