Isolation of Stenotrophomonas maltophilia from water and water tap

Background and objectives: Stenotrophomonas maltophilia is one of the pathogenic bacteria originated from water and is released through water. This study was conducted with the aim of isolating Stenotrophomonas maltophilia from water and water tap in the environment and investigating the existence of rpfF gene and its relation with biofilm formation, motility and the extracellular enzymes of bacteria.

Methods: This cross sectional descriptive study was done on 150 samples of water and 100 samples of water tap in the environment. First, samples were identified through cultivation and molecular method. Existence of rpfF gene of isolates was investigated by PCR method. Formation of biofilm by microplate method and staining crystal violet was investigated. Swimming, swarming and twitching motilities of bacteria and also production of extracellular enzymes of isolates were investigated. In order to find out the relationship between rpfF gene and biofilm formation, motility and production of Extracellular enzymes, Pearson’s statistical analysis was used.

Conclusions: The results of this study suggested the existence of Stenotrophomonas maltophilia bacterium in water and water tap. Also, there was a significant relationship between the existence of rpfF gene and biofilm formation and extracellular enzymes and positive relationship with motility of bacteria.

Stenotrophomonas maltophilia is a gram-negative and nonfermented bacterium. Growing outbreak of hospital infections originating from this bacterium is considered important in immunocompromised individuals because this pathogenic bacterium is related to the considerable cases of patients’ death [1,2].

Stenotrophomonas maltophilia is a water source organism and has multiple drug resistance which is possible to be at risk of breaking out in or out of hospital. These bacteria exist in Aquatic and marine environments with low or lack of nutritional materials. Besides, the number of Stenotrophomonas maltophilia cells in water samples, depending on environmental conditions including how to use water source and heat, is different [3].

Plumbing water can include pathogenic factors to the extent that it’s important for immunocompromised individuals [4]. This bacterium is isolated from several sources and can be found on plumbing water [5]. Sink pores, lakes and rivers, biofilms on the fractured surfaces, aqueous solutions, plumbing and bottle water, ice machines and sinks [3].

Stenotrophomonas maltophilia has flagella and fimbriae which help bacteria adhere well to the living and non-living surfaces [6]. Also, it’s able to form biofilm in systems of water distribution and be a risky factor for immunocompromised individuals [1,7]. In drainage of aquatic environment, these bacteria may be deposit and form biofilm [3]. Enzymatic activities of bacteria help them grow and survive in environment [8].

Bacterial cells are not aware of the density of other microorganisms but can indirectly identify the bacterial congestion by marker system which intervene the production of certain molecules [9] and this action is called Quorum Sensing (QS).

In contrary to gram negative bacteria, Stenotrophomonas maltophilia has a kind of cell to cell signal factor which is too much similar to the system associated to Diffusion Signal Factor (DSF) from herbal pathogenic bacteria called Xanthmonas campestris, instead of using autoinducer molecules or LuxIR [10]. Quorum sensing system in this bacterium is a regulating factor in pathogenicity of Stenotrophomonas maltophilia. Production of DSF which is essential for quorum sensing is under the control of rpfF gene [11].

This study aims to isolate Stenotrophomonas maltophilia from water and water tap and investigate the existence of rpfF gene and its relation to biofilm formation, motility and extracellular enzymes.

A hundred and fifty water and 100 water tap samples were collected in Amol of Iran in 2016. Simple sampling method was used and the number of samples were determined from the previous works. Water sampling was done in sterile condition and sterile dish. First, water flows out of tap pipe for 5 min and then the water tap was disinfected by flame and chlorinated water was neutralized by sodium thiosulfate. Then samples passed through sterile filter and filter transferred to inside of Trypticase Soy Broth (HiMedia). Sampling of water tap was done by swab, it firstly transferred to Trypticase Soy Broth (HiMedia) and in both cases, after 24 h, the process continues.

After cultivating the samples in blood agar and MacConkey agar broth, observation of gram negative bacilli, biochemical tests were done for detecting bacterium.

DNA was extracted by high pure PCR template preparation kit based on the following protocol:

The elements of PCR reaction including 5 μL from DNA, 0.2 μL from enzyme of Taq DNA Polymerase, 1 μL from every primer (F: GCTGGATTGGTTCTAGGAAAACGC and R: ACGCAGTCACTCCTTGCG) of 23 S rRNA gene [12], 0.5 μL from dNTP, 2.5 μL from buffer, 0.75 μL from MgCl2, 14.05 μL from deionized water mixed and the final volume was 25 μl. For rpfF gene, the reaction element was the same. The primers related to this gene were designed by AllelID 6 which included R: CGAGGAAGGCGTGTTGATGG and F: CTGGCTGGCGGTGTAGAGG.

In order to investigate the formation of biofilm, microplate method and crystal violet painting were used and glacial acetic acid was added to each sink and reading optical absorption in 492 nm by Elisa reader device [13]. For each sample, three repetitions occurred and samples were classified as bellow:

Statistical analysis was done by SPSS VERGEN 16. Descriptive statistics were used to describe the basic features of the data. Pearson’s correlation test was used to evaluate the data.

Isolates with 23 S rRNA formed band around 278 bp (Figure 1). The production of PCR was sent to Macro gene Company in South Korea in order to determine the sequence and the results of sequence determination have approved the given bacteria after blasting in NCBI. 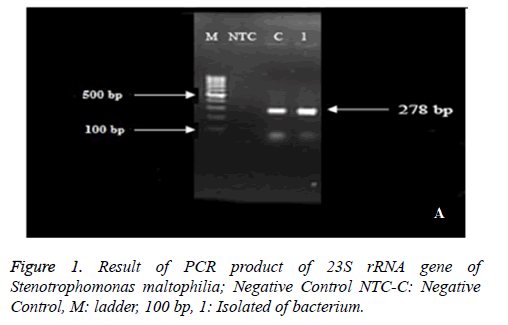 Result of PCR product of rpfF gene of Stenotrophomonas maltophilia suggested that 100 % of isolates included rpfF gene and formed band around 145 bp (Figure 2). 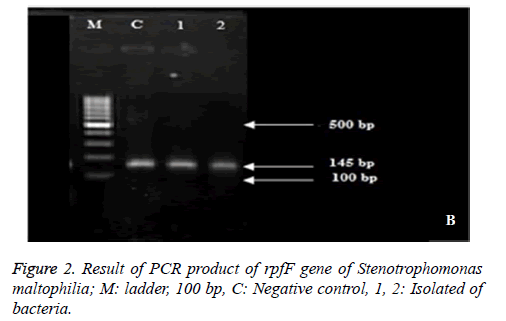 The results of Pearson’s correlation test between the type and the level of motility of bacteria tested by control bacteria with rpfF gene suggested that the correlation coefficient between rpfF gene and type and level of bacteria motility was positive and weak and was not statistically significant (P>0.05). 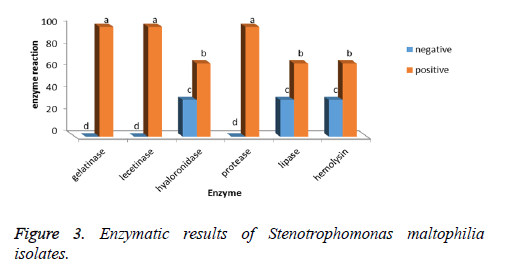 Increasing the global warming, most probably causes growing of cells and if the cells are in close contact with sensitive people, they will be active and bring about the risk of increasing infections. Also, increasing the cellular density of these bacteria in aqueous environments may result in entering external DNA and receiving following important drugresistance and pathogenic genes. Entering the bacteria through water to clinical resources seems logical.

In present study, Stenotrophomonas maltophilia bacterium has been isolated from 1% of water tap samples and 1.33% of water samples. In the study of Adjide et al. in 2010, Stenotrophomonas maltophilia bacterium has been found in 2.5% of pipe water swab which was higher than what was found in this study [16], luckily, the present study suggested less infection.

There may be a relationship between the type of motility and the environment that bacteria reside. Some of the bacteria have two flagella used for motility in different environmental conditions [18].

All of the bacteria isolates had enzymes of gelatinase, lecithinase and protease but lipase, hemolysin, hyaluronidase enzymes included in 66.66% of isolates. It is likely that these enzymes in clinical isolates, due to red blood cells, lipids and hyaluronic acid of host tissue, are high. Enzymatic activities of bacteria, helps the pathogenicity of bacteria and clinical isolates are able to get the genes producing these enzymes from outside of the hospital.

One of the other factors which help the pathogenicity of bacteria is biofilm formation. In this study, all of the isolates were able to form biofilm, but some of them were able to form moderate biofilm and the others to form weak ones. In a study done by Bonoventura et al. it was concluded that the ability of forming biofilm is effected by different environmental conditions such as heat, access to oxygen and pH [19].

One of the adjusting factors of pathogenicity of Stenotrophomonas maltophilia bacteria is rpfF gene [11]. This gene plays role in adjusting the motility, forming biofilm and producing protease extracellular enzymes and antibiotic resistance of bacteria. Mutant strains of rpfF gene suggested the decrease in ability of movement and biofilm formation. Adjusting the formation of biofilm depends on rpfF gene [17]. In this study, all of the isolated bacteria had rpfF gene. In the study of Zhuo et al. the frequency of rpfF gene in Stenotrophomonas maltophilia bacteria was 50% [20] and in the study of Pompillio et al., it was 61.8% [17].

The results of the studies of Zhuo et al. and Pompillio et al. were different from those of this study in terms of the frequency of rpfF gene. So this gene is not seen in all isolates of bacteria. The results of this study suggest that all of the isolates could form biofilm, had motility, especially strong swimming motility and also gelatinase, lecithinase and protease enzymes were seen in all isolates, so we can conclude that this gene is related to this pathogenic factors., as Pompillio et al. but in terms of gelatinase enzymes, lecithinase was not mentioned [17].

The results of this study, suggested the existence of Stenotrophomonas maltophilia bacterium in water and water tap. Also, there was a significant relationship between the existence of rpfF gene with biofilm formation and extracellular enzymes and also a positive relationship with the type of bacteria motility.

We are grateful to the molecular lab staff from the Pasteur Institute of Iran (North research Center) and Islamic Azad University Ayatollah Amoli Branch for their sincere cooperation.