#These authors have contributed equally to this work

Yaks are mainly distributed in the Qinghai Tibet Plateau and its adjacent alpine areas. There are 3 million 900 thousand Yaks in Tibet, accounting for 30% of the total number of Yaks in the world [1]. Yak provides livestock, meat, fur and other livestock products for Tibetan herdsmen, which is an important economic source of local people [2]. Compared with normal milk, the yak milk is rich in protein, essential amino acids, fat, lactose and minerals [3]. With fresh yak milk as raw material, the traditional fermented yak yogurt is kind of flavored dairy product of a low alcohol content, which is made from various lactic acid bacteria and yeasts and so on, as a complex microbial system with many excellent characteristics of lactic acid bacteria. The research found that there are Lactobacillus delbrueckii, Lactococcus, Enterococcus, Bacillus and other lactic acid bacteria in solidified yak yoghurt in pastoral area of Yushu Tibetan Autonomous Prefecture, Qinghai, China [4]. Twelve kinds of lactic acid bacteria are found by analysis of Tibet traditional fermented cheese through PCR-DGGE method (Naizha) in lactic acid bacteria, including L. paracasei, fermentation of Lactobacillus, Lactobacillus plantarum, among which Lactobacillus delbrueckii is the dominant bacteria [5].

As general term for beneficial microorganisms, probiotics are good for the parasitifer as microbial colonization in the human intestinal tract and reproductive system, which can produce the exact health effects so as to improve micro ecological balance of parasitifer, and play a useful role in the activity [6]. Beneficial bacteria or fungi in the human and animals mainly include Clostridium butyricum, Lactobacillus, Bifidobacterium, Actinomycetes and yeast etc. [7]. Probiotics have been now widely used in bioengineering, industrial and agricultural, food safety and life and health fields. With the rapid development of fermented dairy products, the development of probiotic products with better physiological functions has become an important direction for the development of dairy industry [8]. Lactic acid bacteria with gastric and intestinal juice and intestinal absorption capacity can be used as potential probiotics for further development [9]. Li et al. [10] found one strain of Lactobacillus helveticus MB2-1 was isolated from traditional fermented milk. The study showed that the strain had good antioxidant activity in vitro, the research on probiotic lactic acid bacteria of milk curd in Inner Mongolia king series showed that Lactobacillus plantarum M1-2 and Lactobacillus rhamnosus M6-1 have good probiotic properties with potential application value through the simulation of artificial gastric juice, bile salt and hydrophobic test [11].

In this study, the natural fermented yak yogurt from Yushu area of Gansu province, China were isolated, and the traditional combination of physiological and biochemical experiments and 16S rDNA gene sequence analysis is conducted to identify one strain of lactic acid bacteria, and its probiotic potential in vitro is studied at the same time, which provide the basic information for the development and utilization of resources of lactic acid bacteria in yak yogurt.

The natural fermented yak yoghurt was adopted from herdsman family in Qinghai Tibet Plateau in Yushu, Qinghai, China. The solution we prepared contains 1 mL natural fermented yak yoghurt which was diluted to 10-7 in a sterile saline for a 10 fold gradient. The 10-5, 10-6 and 10-7 natural fermented yak yoghurt diluent was added on culture dish of 15 mL MRS medium (containing 5% CaCO3) it then cultured in the constant temperature incubator (Biochemical incubator BI-150A, STIK, Shanghai, China) for 72 h. After colony formation, the colonies of bacteria which had calcium dissolving ring were inoculated on skim milk medium for 48 h (30°C), then streak inoculated on MRS agar medium for 48 h (30°C), above two steps were repeated thrice until the pure colonies were obtained.

The lactic acid bacteria bacterial culture (5 mL) was collected by centrifugation (1,000 × g, 10 min). The collected bacterial pellet was re-suspended using a sterile saline (5 mL), and following which 1 ml suspension was mixed with 9 mL sterile artificial gastric juice (0.2% NaCl, 0.35% pepsin, pH 3.0) and incubated in a thermostatic oscillator at 37°C and 300 rpm. Subsequently, sample (200 µL) was pipetted well and incubated with a Lactobacillus MRS Agar plate at 37°C for 3 h. After 0 and 3 h later, the number of colony forming units (CFUs) was counted and calculated the bacterial survival rate, the survival in pH 3.0 artificial gastric juice was calculated according to formula: viable count at 3 h (CFU/mL) / viable count at 0 h (CFU/mL) × 100% [12].

According to the inoculation amount of 2%, the lactic acid bacteria solution was inoculated into MRS-THIO medium MRSTHIO medium (MRS medium was added with 0.2% sodium acetate) containing 0.0%, 0.3%, 0.5% and 1.0% cattle bile salt, respectively. After incubation at 37°C for 24 h, the blank medium was used as control, all the media were determined at 600 nm, and the growth in bile salt was calculated according to formula: bile salt containing culture medium OD600 nm/blank culture medium OD600 nm × 100% [12].

The surface hydrophobicity of the strain was determined by BATH (carbon hydrocarbon adhesion method). The mycelia were collected at 5 mL and centrifuged at 3000 r/min for 10 min. 5 mL PBS (50 mmol/L, pH 6.5) of buffer mycelium was washed for 2 times with. PBS buffer was used as blank control, and the concentration was adjusted by PBS buffer, to make the OD560 value about 1.4 mL of bacterial fluid with concentration adjusted was put into 10 mL of sterile centrifugal tube, with 0.8 mL of xylene, while there is no xylene in the control group. The oscillation is 30 s, the pause is 10 s, and the oscillation is 30 s later. Then, standing for 5-10 min for layer, take the lower aqueous phase, with PBS buffer fluid as the blank control to test OD560 the value of nm. The hydrophobic rate (A0 and A are nm values of OD560 of bacteria fluid before and after mixing with xylene) are calculated according to the formula: (A0-A)/A0 × 100% [12].

After performing MRS culture medium, the strain showed neat white, round, edge, centrally slightly raised, a diameter of about 1.6 mm, the surface is thick and opaque, smooth (Figure 1). Through gram staining, the stain also showed gram positive, long rod-shaped, arranged in clusters or arranged in chains, with darker staining. Therefore, preliminary identification confirmed that the stain might be Lactobacillus. 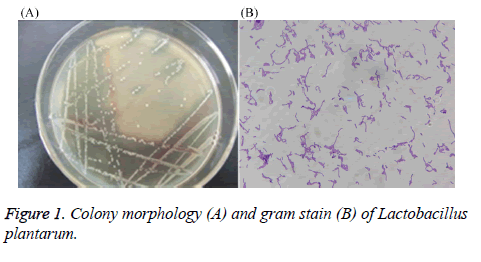 Figure 1: Colony morphology (A) and gram stain (B) of Lactobacillus plantarum.

The physiological and biochemical test results of Lactobacillus were showed in Tables 1-3, the stain was identified as Lactobacillus plantarum.

The PCR amplification of 16sDNA gene results showed that negative control had no banding, the amplified had no pollution (Figure 2). The lane was a length of about 1500 bp the specificity of the amplified fragment, expected amplified fragment length (Figure 3). After sequence determination and matching gene sequence in Genbank, the sequencing result was GTGCAATGGCGGCTTGCCTAATACATGCAAGTCGAACGAACTCTGGATTGATTGGTGCTTGCATCATGATTTACATTTGAGGGAGTGGCGAACTGGTGAGTAACACGTGGGAAACCTGCCCAGAAGCGGGGAATAACACCTGGAAACAGATGCTATACCGCATAACAACTTGGACCGCATGGTCCGAGnTTGAAAGATGGCTTCGGCTATCACTTTTGGATGGTCCCGCGGCGTATTAGCTAGATGGTGGGGTAACGGCTCACCATGGCAATGATACGTAGCCGACCTGAGAGGGTAATCGGCCACATTGGGACTGACTCACGGCCAAACTCCTACGGGAGGCAGCAGTAGGGAATCTTCCACAATGGACGAAGTCTGATGGAGCAACGCCGCGTGAGTGAAAAGGGTTTCGGCTCGTAAACTCTGTTGTTAAAGAAGAACATATCTGAGAGTAACTGTTCAGGTATTGACGGTATTTAACAGAAAGCCACGGCTAACTACGTGCCAGCAGCCGCGGTAATACGTAGGTGGCAAGCGTTGTCCGGATTTATTGGGCGTAAAGCGAGCGCAGGCGGTTTTTTAAGTCTGATGTGAAAGCCTTCGGCTCAACCGAAGAAGTGCATCGGAAATGGGAAACTTGAGTGCAGAAGAGGACAGTGGAACTCCATTGTAGCGGTGAAATGCGTAGATATATGGAAGAACACCAGTGGCGAAGGCGCTGTCTGGTCTGTAACTGACGCTGAGGCTCGAAAGTATGGTAGCAAACAGGATTAGATACCCTGGTATCCATACCGTAAACGATGAATGCTAAGTGTTGGAGGGTTTCCGCCCTTCAGTGCTGCAGCTAACGCATTAAGCATTCCGCCTGGGGAGTACGGCCGCAAGGCTGAAACTCAAAGGAATTACGGGGGCCCGCACAAGCGGTGGAGCATGTGGTTTAATTCGAAGCTACGCGAAGAACCTTACCAGGTCTTGACATACTATGCAAATCTAAGAGATTAGACGTTCCCTTCGGGGACATGGATACAGGTGGTGCATGGTTGTCGTCAGCTCGTGTCGTGAGATGTTGGGTTAGTCCCGCACGAGCGCAACCCTTATTATCAGTTGCCAGCATTAAGTTGGGCACTCTGGTGAGACTGCCGGTGACAAACGGAGGAAGGTGGGGATGACGTCAAATCATCATGCCCCTTATGACCTGGGCTACACACGTGCTACAATGGATGGTACAACAGTTGCGAACTCGCGAGAGTAAGCTAATCTCTTAAAGCCATTCTCAGTTCGGATTGTAGGCTGCAACTCGCCTACATGAAGTCGGAATCGCTAGTAATCCGGATCAGCATGCCGCGGTGAATACGTTCCCGGGCCTTGACACACCGCCCGTCACACCATGAGAGTTTGTAACACCCAAAGTCGGTGGGGTAACCTTTTAGGAACCAGCCGCCTAAGGGGGACAGATGATTAGGGTGGGT (Lactobacillus plantarum strain CIP 103151). The isolation and identification of lactic acid bacteria was named Lactobacillus plantarum YS2 (LP-YS2), and this stain was preserved in China Center for Type Culture Collection (CCTCC, Wuhan, China) also we can introduce the preservation number which was M2013512. 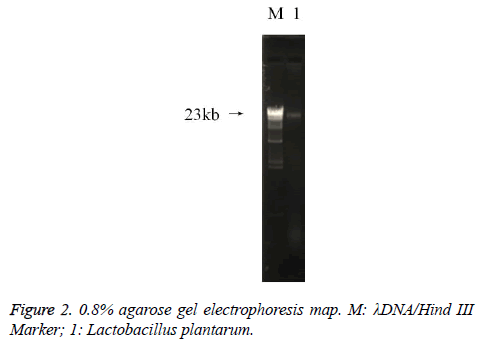 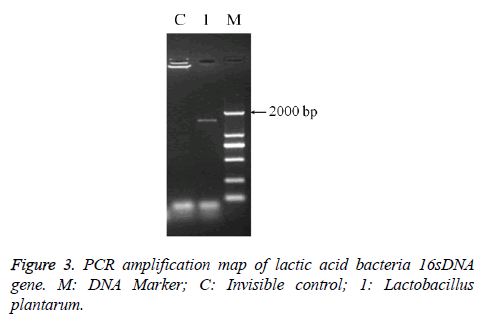 The colony counts of LP-YS2 at 0 and 3 h were more than LB, and following exposed to the artificial gastric juice, LP-YS2 exhibited higher gastrointestinal survival ability than that of LB (Table 4).

When probiotics enter the intestinal tract, the bile salts in the small intestine inhibit the probiotics. Therefore, the tolerance of the strains to bile salts is often one of the important indicators for screening probiotics [19]. Generally, the concentration of bile salts in human body fluctuates within the range of 0.03% to 0.3%. Studies have shown that the survival rate of lactic acid bacteria more than 70% in the artificial gastric juice can grow in different concentrations of bile salt, and the growth efficiency decreases with the increase of bile salt concentration. The reason is that high concentration bile salt can make the membrane permeability change, membrane protein dissociation, eventually lead to intracellular material flow, some cell death [20]. In the screening of probiotics in vitro, the surface hydrophobicity of bacteria reflects the ability of bacteria colonization in vivo, as with strong hydrophobic ability, lactic acid bacteria have good adhesion and strong colonization ability [21].

The present research was supported by Chongqing Research Program of Basic Research and Frontier Technology (cstc2016jcyjA0339), Chongqing Engineering Research Center for Functional Food (cstc2015yfpt_gcjsyjzx0027), Research Project of Chongqing University of Education (KY2015TBZC), and the Program for Innovation and Team Building at the Chongqing Institute of Higher Education (CXTDX201601040), China.