Isolation and genome sequence analysis of a bacterium degrading dexamethasone

In this study, we reported the genome sequence of Burkholderia sp.CQ001, a Dexamethasone (DXM) degrading bacterium isolated from hospital wastewater and identified by morphological analysis, staining and 16S rRNA sequencing. The degradation rates of dexamethasone sodium phosphate and dexamethasone were 84.8% and 77.11% respectively. And degradation peak appeared at 24 h during agitation culture at 37°C in medium with an initial pH value of 7.5. Genome sequencing was performed using Illumina Hiseq4000 high-throughput sequencing platform. Genome sequencing results demonstrated that the bacteria had a total genome size of 7570308 bp, 66.9% G+C content. Metabolic related genes account for 80.3%. Metabolism-associated genes covered 116 metabolic pathways, including metabolic pathways of microorganisms in different environments and decomposition pathways of secondary metabolites. One of the eight key genes annotated to the metabolic pathway of steroid compounds. This is the first report on Burkholderia sp.CQ001 showing characteristics of degrading dexamethasone. Our findings may provide insights on dexamethasone degradation mechanisms, and facilitate the establishment of bioremediation engineered bacteria to eliminate the dexamethasone pollution.

Dexamethasone (DXM), synthetic long-acting glucocorticoids, has been extensively used in the prevention and treatment of various human and poultry diseases in the past decades [1-3]. Dexamethasone Sodium Phosphate (DSP) is the most commonly used formulation of DXM in clinical practice due to its water solubility and absorbability [4]. However, long-term or high-dose use of DXM frequently leads to severe adverse events including Cushing's syndrome, cardiovascular disease, osteoporosis, or aseptic necrosis of the femoral head [5-7]. Previous studies have reported that DXM residues may cause environmental pollution through a variety of ways including industrial, hospital, or domestic wastewater, or even drinking water [8-11]. Therefore, studies on dexamethasone degradation mechanisms are important in establishment of bioremediation engineered bacteria to eliminate the dexamethasone pollution.

Burkholderia is a gram-negative bacterium distributed widely in water, soil, plants and human body [12,13]. It has a unique metabolic potential that can grow and reproduce with more than 200 kinds of organic compounds as a carbon source [13]. The genome sequences of some strains of the Burkholderia genus have been disclosed, and the whole genomic information of B. vietnamiensis strain G4 and B. xenovorans LB400 with the property of degradation have been reported [14]. However, the degrading effects on steroids and their related genes by these strains have not been investigated.

Isolation and identification of bacteria

One bacterial strain was isolated from the wastewater of a hospital in Chongqing, China (29° 33'N, 106° 28'E) using the methods reported by Wang et al. [15]. The solid phase extraction-High Performance Liquid Chromatography (HPLC) method was used to detect the degradation effects of the bacteria on DXM and DSP (500 μg/ml), and the effects of initial medium pH and temperature on the degradation.

Genomic DNA was extracted using DNA preparation kit according to the manufacturer’s instructions (Takara, Japan). The 16s rRNA gene sequences of Burkholderia sp.CQ001 were amplified by PCR with universal primers of 27F and 1492R. The genomic sequencing for amplification products was conducted using sequencer of ABI3730XL at Majorbio Biopharm Technology Company (Shanghai, China), and sequence analysis was carried out in the NCBI database. Meanwhile, The 16s rRNA full sequences of 16 bacterial strains with high similarity to the sequenced strains were downloaded from NCBI GenBank, and the multiple sequence comparison was conducted using CLUSTAL W [16]. Ultimately, comparative results were analysed by MEGA 6.0 [17] using neighborjoining method (bootstrap=1000) to build the phylogenetic tree [18].

Genome sequencing was performed at Majorbio Bio-Pharm Technology company (Shanghai, China) using Illumina Hiseq4000 high-throughput sequencing platform by building a ~500 bp Paired-End library. After handling of the raw data, the optimized sequences were spliced using SOAPdenovo software (version 2.04) [19]. The partial filling and base correction were carried out for the optimal assembly sequences obtained through the above-mentioned procedures by GapCloser software (version 1.12). Ultimately, the filled and corrected sequences were matched to the measured sequences (reads), and assembled results were evaluated by statistics analysis for the depth of coverage between the content of G+C and reads. A total of 1,390,912 of original sequences were identified, and 12,891,489 high-quality sequences were obtained after quality cutting.

The rRNAs and tRNAs genes included in the genome were predicted using RNAmmer (version 1.2) [20] and tRNAscan- SE (version 1.3.1) [21] software, respectively. The proteincoding sequence was predicted using Glimmer software (version 3.02) [22]. To obtain functional annotation information of COG [23], GO, KEGG [24] and other relevant database, a blast alignment (BLAST 2.2.28+) was conducted between the predicted sequences and Nr, genes, string and GO database. Blast alignment information was adopted only when E values ≤ 10-5. The relevant functional genes that may be involved in the degradation of DXM were assessed.

The isolated bacteria with potential of degrading DXM/DSP were gram-negative bacillus with straight or slightly curved cylinder shape, and 6-15 μm × 4-15 μm in length and diameter. On LB agar plates, the bacteria formed a milky white opaque colony with medium size (d=1.5-2.0 mm), round, smooth and moist surface, regular edge, and easy to be stirred up (Figure 1). The catalase and oxidase tests showed positive results. The bacteria were initially identified by 16s rRNA sequencing, which belonged to the genus Burkholderia and were named as Burkholderia sp.CQ001. A 16srRNA-based phylogenetic tree was constructed (Figure 2), which revealed Burkholderia sp.CQ001 having closest kinship with Burkholderia contaminants J2956 in evolution. 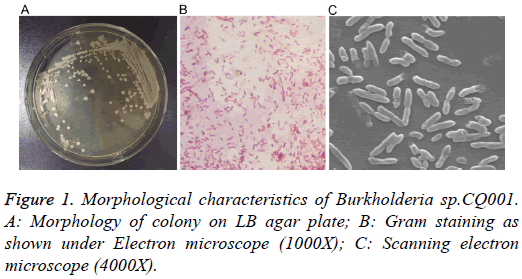 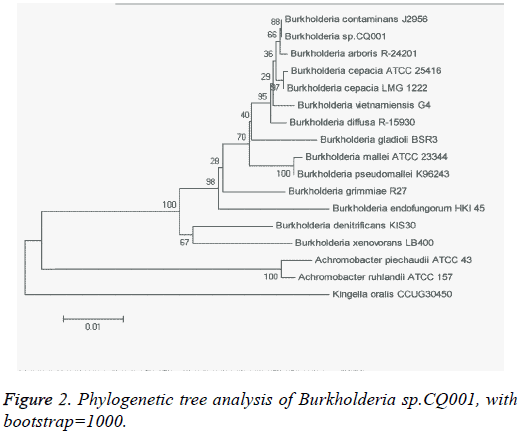 These bacteria can degrade DSP into DXM and then degrade the latter into other small molecules, with the degradation rates of 84.8% and 77.11%, respectively. And degradation peak appeared at 24 h during agitation culture at 37°C in medium with an initial pH value of 7.5.

The basic characteristics of the genome

COG function classification: The alignment results compared with COG sequences were shown in Figure 3A, about 70.1% genes were annotated. There were 408 genes for energy production and Conversion (C), 395 for carbohydrate transport and metabolism (G), 260 for secondary metabolism biosynthesis, transportation and catabolism (Q), 135 for intracellular trafficking, secretion and vesicular transportation (U). These genes may be closely related to the degradation of dexamethasone of the bacteria. Depending on COG classification, the functional gene of Burkholderia sp.CQ001 was classified into four categories (Table 2). Therefore, we speculate that the bacteria have a unique metabolism potential that can grow and reproduce with DSP as the sole carbon source and survive in the extreme environment just like hospital wastewater. 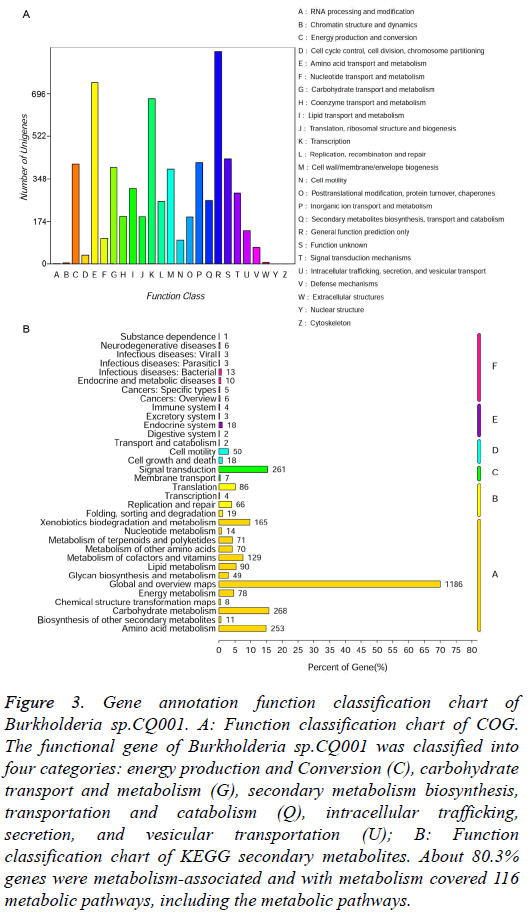 KEGG metabolic pathway the specific genes involved biological pathways can be achieved through KEGG analysis (Figure 3B). About 80.3% genes were metabolism-associated and they covered 116 metabolic pathways, including the metabolic pathways of microorganisms in different environments and decomposition pathways of secondary metabolites. More importantly, there were also 165 genes of degradation and metabolism for xenobiotics (A: Metabolism/ Xenobiotics biodegration and metabolism). Among them, 8 pathways involved in the metabolism of steroid compounds can encode 7 key enzymes (Table 3). According to the steroid degradation pathway (http://www.genome.jp/kegg/ pathway.html), the metabolic pathways of steroid compounds in Burkholderia sp.CQ001 KEGG pathway are as the follows: 3β-HSD continuously catalyses the 3β-OH steroid compounds dehydrogenation and isomerism reaction, facilitating the first step in the ring opening reaction of the steroid nucleus [25,26]. The interaction of KstD and KSH induces the cleavage of the B ring of the steroid nucleus [27]. KSH is composed of KshA and KshB. The Hsa family proteins catalyze the cleavage of the steroid nucleus into ATP and small molecule organic salts and coenzymes [28]. The presence of these genes and pathways provides a basis for the degradation of steroid hormones by Burkholderia sp.CQ001.

Table 4: Comparison of basic genome characteristics between Burkholderia sp.CQ001 and other strains of Burkholderia.

The genome sequences of Burkholderia sp.CQ001 were stored in the DDBJ/EMBL/GenBank database under accession number PRJNA339502.