Existing biochemical markers are not suitable for assessing early myocardial ischemia particularly in first 2-6 hours of ischemia i.e. before setting in of irreparable myocardial damage. Recently ischemia modified albumin (IMA) has emerged as the earliest cardiac marker. Therefore, this study was planned to estimate IMA levels in patients of acute chest pain with or without cardiac cause. One hundred patients of acute chest pain (50 patients with cardiac cause and 50 patients with non-cardiac cause) were selected for the study and compared with 50 age and sex matched healthy controls. IMA, creatine kinase- MB (CK-MB), Troponin I, routine biochemical investigations, hemoglobin and total leucocyte count were estimated in these patients. The results were analysed statistically. IMA levels were found to be significantly elevated in patients of chest pain with myocardial ischemia as compared to the other two groups. A significant positive correlation was found between IMA levels & CKMB levels (r = +0.713, p value<0.001) and IMA levels & troponin I levels (r = +0.823, p value<0.001) but a poor correlation was observed between IMA levels and SGOT levels (r = - .012, p value>0.05). Thus we conclude that IMA assay is a sensitive but not very specific marker for early detection of myocardial ischemia. IMA can be combined with other biochemical markers like CK-MB and Troponin I to increase the specificity. Other non myocardial ischemic conditions should be kept in mind while interpreting IMA values.

Heart disease is the leading cause of death in the world. Incidence of ischemic heart disease is rising alarmingly due to rapid urbanization, sedentary life style, altered food habits and increasingly stressful life. Evaluation of patients presenting with chest pain in the emergency department is difficult and challenging [1,2]. Though there are clinical, biochemical and other laboratory tests which help in diagnosis but there is no rapid and definitive test which can be termed as gold standard to rule out myocardial ischemia. Only about 22% of the patients admitted to cardiac care centres with acute chest pain actually develop acute myocardial infarction [1].

HSA (Human Serum Albumin) is the most abundant multifunctional protein in blood, with a mean concentration of 0.63 mmol/L (40g/L) consisting of 585 amino acid residues (66.5 kDa) folded into three homologous domains as determined by X-ray crystallography, synthesized in the liver, and having a half-life of 19 days [3]. Extensive studies of the metal binding properties of HSA have revealed that metal ions bind to a wide variety of sites [4]. The best characterized metal binding site is located at the N-terminus, which is comprised of amino acid sequence N-Asp-Ala-His-Lys [5]. Out of these four residues first three have been shown to be essential for metal ion binding while the fourth one (lysine) is not essential [6]. These sites have particular high affinity for copper and nickel. The groups that participate in this binding have been shown to be the α-amino group, the two intervening peptide nitrogen atoms, the δ-imidazole nitrogen from His3 and the side-chain carboxyl group of Asp1[4]. Recently, a biochemical test has been reported based on the binding between the serum albumin and the transition metal cobalt. This is known as the albumin co balt binding (ACB) test which is based on the observations that the binding of cobalt to albumin is reduced in serum in patients of myocardial infarction (MI). Albumin in which N-terminus is either damaged or occupied by copper is termed as ischemia modified albumin (IMA) and the test is referred to as ACB test [7-9]. Conditions necessary for altering the metal binding site of HSA are known to occur in vivo and probably occur within minutes after the onset of myocardial ischemia [10-12].

So it can act as the earliest marker for MI. Therefore this study was planned to estimate IMA in patients of acute chest pain with or without cardiac cause.

After obtaining informed consent from the patients and approval from the institutional board of studies, the present study was conducted on 100 patients of acute chest pain (age group 30-60 years) visiting the Emergency Department of Pt.B.D.Sharma PGIMS, Rohtak within 6 hours of chest pain and 50 healthy controls. These patients were divided into three groups based on electrocardiography (ECG) changes and clinical signs and symptoms. 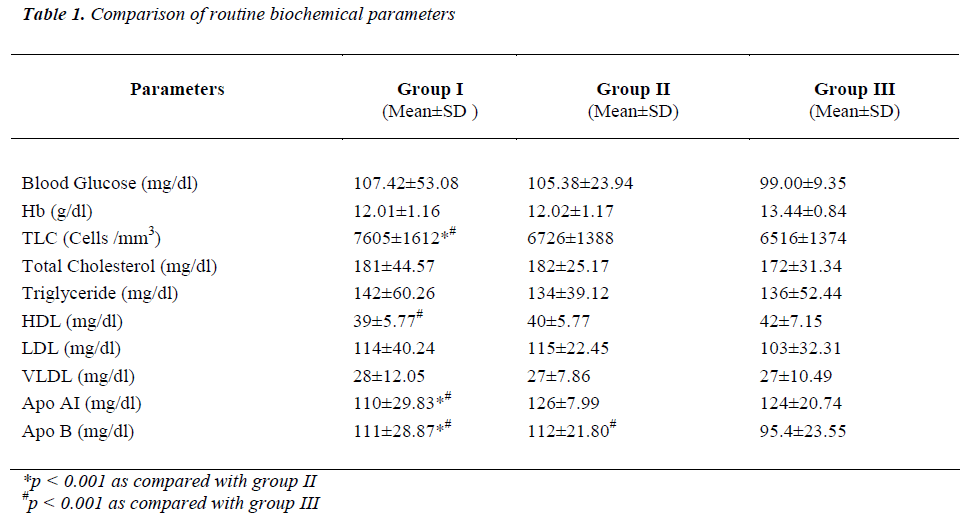 Myocardial ischemia results from lack of adequate blood perfusion to the myocytes leading to deficiency of oxygen and nutrients, eventually compromising their vital functions. In a clinical setting, myocardial ischemia is diagnosed by clinical presentation and ECG. In addition to symptomatic and ECG diagnosis, biochemical markers play an integral part in the diagnosis and therapeutic management of these patients. An ideal myocardial ischemia marker should be highly sensitive, highly specific and it should be detected at earliest (i.e. preferably before irreversible damage occurs). Further, the marker should be able to influence therapy, improving patient’s outcome.

We know from previous studies that IMA levels rise much earlier than CK-MB levels. In the present study IMA levels were not elevated in group of patients with chest pain of non-cardiac origin and in healthy volunteers. However many studies have demonstrated that IMA levels can be elevated in conditions other than myocardial ischemia like pregnancy, stroke, chronic renal disease, exercise-induced calf ischemia, marathon runners due to exercise-induced latent gastrointestinal ischemia [14-20]. IMA also increases after skeletal muscle ischemia during arthroscopic knee surgery [21].

The basis of the IMA assay is that, serum albumin of individuals with myocardial ischemia exhibits reduced binding to Co2+ compared with serum albumin of nonischemic individuals [9]. It is well known that within minutes of onset of myocardial ischemia, there is hypoxia, free radical damage and acidosis followed by disruption of membrane sodium / calcium ion pumps. This, in turn, causes alteration in the NH2 terminus of albumin which has a high affinity for transition metals like Cu2+ and Ni2+. This leads to reduced binding capacity of cobalt ions to albumin. Studies have indicated that mechanisms involved in ischemia/ reperfusion are induced changes in albumin and may include exposure to endothelial and extracellular hypoxia, acidosis, free radical damage, ATP dependant sodium and calcium pump disruption resulting in exposure to free iron and copper ions [10-12].

Thus, we conclude that IMA assay is a sensitive but not very specific marker for early detection of myocardial ischemia. There is a good correlation of IMA assay with other cardiac markers, so IMA can be combined with these biochemical markers to increase specificity. Other non-myocardial ischemic conditions should be kept in mind while interpreting IMA values.