Introduction: Gallbladder carcinoma is a common hepatobiliary malignancy with poor prognosis. It is 3rd commonest malignancy in north India. Salmonella typhi is one of risk factor for gallbladder cancer. India is high endemic area for typhoid in the world. Various authors reported association between the two but without doing testing for typhoid carrier, association cannot be proven.

Aim: The present study was designed to explore the association of the chronic typhoid carrier state and carcinoma gall bladder by detecting Salmonella typhi in specimens of gallbladder from patients with malignant and benign gallbladder diseases using a Nested PCR. Methods and material: In this prospective case control study, we have got 39 samples from Carcinoma Gall Bladder (GBC) patients as cases and 75 samples from benign Gall Bladder Diseases (GBD) patients as controls in two years duration. We have done Indirect haemagglutination test for typhoid carrier from five milliliters of blood which was collected from each patient before surgery. Nested PCR was done from gall bladder tissue, which was taken at operation, from both GBC and GBD patients.

Conclusion: A large number of sample size is require for proving association between carcinoma gall bladder and Salmonella typhi by using definite marker for Vi antibodies.

Gallbladder Carcinoma (GBC) is a common hepatobiliary malignancy with poor prognosis. In India it is 3rd commonest malignancy in north India. [1] Gallbladder Carcinoma (GBC) affects women two to six times more commonly than men and its incidence steadily increases with age. [2] Among the several risk factors for gallbladder cancer (cholelithiasis, obesity, exposure to certain chemicals), chronic infection with S. enterica serovar Typhi is of great importance. Non-carriers and chronic carriers of typhoid were developing gallbladder carcinoma in an approximately 1:8 ratio [3]. Carrier state can be diagnosed serologically or by culture. Stool culture is gold standard test for carriers but it is tedious and costly and has a low sensitivity. Culture isolation rate of S. typhi from GB specimen or bile is very low. Therefore, underreporting of association of typhoid carrier states with CA GB cannot be ruled out. Serological methods have its limits and drawbacks. Molecular methods like PCR is highly sensitive and specific method for diagnose S. typhi from GB specimens. There are various studies that associate carrier state of S. typhi with GBC [4-6] but few reports are available with definite microbiological data from north India [7,8].

Therefore, in the present study we were trying to evaluate the association of the chronic typhoid carrier state with CA GB by detecting S. typhi in specimens of Gallbladder from patients with malignant and benign gallbladder diseases by nested PCR using flagellin gene.

This study was done in the department of Microbiology of Dr Ram Manohar Lohia Institute of Medical Sciences, Lucknow. Clinical samples were collected from Department of Gastrosurgery of the institute with collaboration of Department of Surgery of King George Medical University, Lucknow.

Gall bladder tissue from operable cases was difficult to get .We have taken 39 samples from Gall Bladder Carcinoma (GBC) patients and 75 samples from benign Gallbladder Diseases (GBD) patients.

The study was conducted in accordance with the ethical rules of the Institute. Informed written consent to participate in the study was obtained from all participants.

Five milliliters of blood was collected from each patient before surgery for serology tests and at operation, 5 ml of bile and 5 mg of fresh tissue was obtained from both GBC and GBD patients and the tissue was immediately frozen and stored at -40°C for DNA isolation.

A. Serological studies: Indirect haem-agglutination test: Method was as Nath et al. [9]. All these cases with Vi antibody titer of >1:160 were taken as positive for typhoid carrier.

B. Culture: Bile was inoculated on Mac Conkey agar, blood agar and Deoxycholate Citrate Agar (DCA) and for enrichment in Selenite F broth and incubated overnight at 37°C. Next day subculture was done from selenite broth on Mac Conkey agar and DCA media. Growth was identified by biochemical testing and other standard methods.

i) DNA extraction: It was done according to manufacturer instructions (genetix kit)

Following was the primers:

For first round PCR to amplify a 495 bp fragment

For nested PCR to amplify a 364 bp fragment

In culture, no isolate of Salmonella typhi was found from bile in GBC and benign GB diseases.

In this study, Salmonella typhi was present in 59% in cases and 56% in controls which is not statistically significant (p value>0.05, Figure 1). 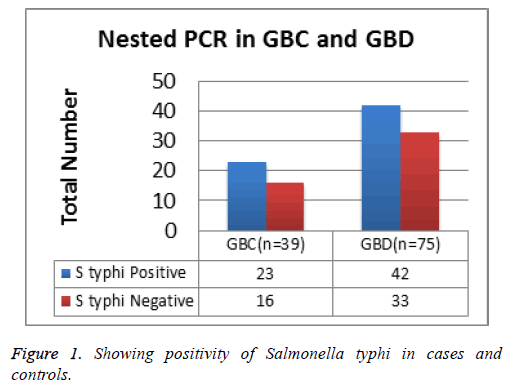 Figure 1: Showing positivity of Salmonella typhi in cases and controls.

In serological studies Vi antibody was present 33% in cases (29% in males and 40% in females) and 37% in control (25% in males and 42% in females) at a significant titer, i.e. ≥ 1:160 by Indirect Haem-Agglutination Assay (IHA) which is not statistically significant (p value>0.05, odd ratio (measure of association between an exposure and an outcome) at 95% Confidence Interval (CI) was 0.8). Sex and age matched analysis showed that that there is almost equal positivity in 30-60 age group in males and females (Table 1).

In molecular study, nested PCR showed 59% positivity for Salmonella typhi in the Gall Bladder Carcinoma (50% in males and 64% in females) and 56% in benign GB Diseases (40% in males and 62% in females) p value>0.05, odd ratio at 95% CI was 0.8. Sex and age matched analysis showed that there is almost equal positivity in each age group in male and female except in <30 year age group no male was there in cases (Table 2).

Table 2. Showing cholelithiasis, cholecystitis and both in cases and controls.

Using chi square test, odd ratio was 1.128 with 95% confidence interval (0.513, 2.509). P value (2 tails) was 0.7609. According to this analysis, association of Salmonella typhi with carcinoma gall bladder is not statistically significant.

In India, Gallbladder Cancer (GBC) is most prevalent in northern and northeastern states e.g. Uttar Pradesh, Bihar, Orissa, West Bengal and Assam. GBC is two times higher in women than men and is the leading digestive cancer in women in northern Indian cities. Our study also showed same results.

The incidence of GBC increases after the age of 45 years and is maximum at the age of 65 years. In our study also, most of the GBC cases were more than 30 years age. There are various risk factors for GBC and a link has specifically been proposed between chronic infection of the gallbladder and Salmonella enterica subspecies enterica serotype Typhi (S. typhi hence forth) [4-8]. But association of Salmonella typhi with GBC is still questionable.

Typhoid fever caused by Salmonella typhi remains one of the leading causes of morbidity and mortality in most of the developing countries with an incidence rate of >100/100,000 population in most South East Asian countries including India [10]. It has been suggested that only 20% of all those infected by S. typhi would develop classical disease whereas 80% remain asymptomatic [11,12]. In India, approximately 15 million people acquire clinical/sub clinical infection each year and only 3% (450,000) of them might be added to the pool of chronic carriers.

Epidemiological studies have shown that chronic carriers of S. typhi have 8.47 times increased risk of developing GBC compared with non-carrier peoples [3]. So without doing testing for typhoid carrier, association of GBC with typhoid cannot be proven. Carrier state can be diagnosed by stool/bile culture, serology and molecular method. Stool culture has very low sensitivity for isolation of S. typhi.

In our study we did bile culture in which not a single isolate of S. typhi was isolated from case or control. In a study by Mallika et al. [13] also no isolate was found in case and control in bile culture. In study of Roa et al. [14] S. typhi was isolated in only 4 cases out of 608 samples of gallbladder bile. In another study only 8.5% isolation rate of S. typhi was found [15]. This low isolation can be attributed to the bacteria's non culturable state including L form or its facultative intracellular location in some remote organ (biliary canaliculi of liver, bone marrow, spleen etc.). Low isolation can also be due to intermittent excretion through the gall bladder or insufficiency of the techniques employed to isolate it [9]. So culture is not a definite marker for carrier detection. In serology, In India there is no Vi Ag/Ab detection commercial kit available for carrier detection. We did Indirect Haemagglutination test in cases and controls. Almost equal positivity was found for Vi antibody in cases and control.

We did nested PCR as describe by Nath et al. [9] for detection of S. typhi from gall bladder tissue and also found almost same positivity in Gall Bladder carcinoma cases and benign GB Diseases controls. In age and sex matched analysis on IHA and PCR, carrier state was present in every group in almost equal ratio in cases and control. So association of Salmonella typhi with carcinoma gall bladder was not statistically proven in our study. Although in their study Nath et al. [9] observed detection of S. typhi from gall bladder tissue and found one and half times positivity in GBC cases as compared to benign GB Diseases controls. Mallika et al. [13] described in their study 33.33% positivity of salmonella typhi in GBC cases by PCR of tissue by using SopE gene. They could not found any positive result in benign gall bladder disease.

Table 3. Cholelithiasis, cholecystitis and both in cases and controls.

A lot of studies should require by using definite laboratory marker for carrier for proving association between GBC and S. typhi. But one definite truth was bringing out that cholecystitis or cholelithiasis was sensitive marker for development of GBC. So any benign GB diseases should be treated as early as possible.