Introduction: The purpose of this study was to determine the association between red blood cell distribution width (RDW) and mortality in super-elderly subjects (≥ 90 years) diagnosed with community-acquired pneumonia (CAP).

Methods: One hundred twenty subjects in the super-elderly age group diagnosed with CAP were followed up for at least one year after first diagnosis time. It was investigated whether high RDW level and advanced age were associated with mortality.

Conclusions: This is the first study to examine the relationship between RDW, age and mortality specifically in a super-elderly subject aged over 90 with a diagnosis of CAP. RDW level, advanced age and presence of Alzheimer’s disease are correlated with mortality in super-elderly subjects (≥ 90 years) with CAP.

Community-acquired pneumonia (CAP) is a significant cause of mortality and morbidity, particularly in the elderly. Pneumonia in elderly subjects prolongs hospitalization and increases complications [1]. Annual mortality levels as high as 40% are seen in subjects with CAP [1]. Morbidity and mortality levels decrease with vaccination and appropriate antibiotic use in several diseases secondary to infection, but the desired decrease is not observed in pneumonia. Pneumonia is the sixth most common cause of death worldwide, the most common cause of infection-related deaths and the second main cause of hospitalization [2-4].

Red blood cell distribution width (RDW) is a routinely used hematological marker analyzed with complete blood count and showing the volume of erythrocytes in the circulation [5]. RDW is routinely employed in the diagnosis of thalassemia and iron deficiency [6]. Numerous studies have reported that RDW levels are correlated with poor prognosis in congestive heart failure (CHF), coronary heart disease (CHD) [7,8], rheumatoid arthritis [9], acute stroke [10], chronic renal failure (CRF) [11], pulmonary embolism [12] and septic shock [13]. While the cause of RDW elevation is uncertain, recent studies have shown that inflammatory processes raise RDW by affecting erythropoiesis and that a high RDW level is associated with poor prognosis in CAP [14,15]. RDW is also known to rise together with advanced age and disease burden [16].

Following receipt of local ethical committee approval, this study was performed as a retrospective investigation of 120 subjects hospitalized with a diagnosis of CAP between 1 January, 2014, and 1 January, 2016 and was followed up for at least one year after first diagnosis time, at the Recep Tayyip Erdoğan University Faculty of Medicine Chest Diseases Department, Turkey. Subjects’ demographic characteristics, basal complete blood count and RDW values at time of diagnosis, accompanying comorbid diseases, laboratory findings, and pneumonia symptoms and findings were collected retrospectively from medical records and recorded. Survival data for subjects dying in hospital were obtained from the hospital archive, and survival data for other subjects were obtained by telephone from the subjects themselves or their families. Diagnosis of CAP was based on Infectious Diseases Society of America and American Thoracic Society guidelines [17]. Following subject archive records examination, at least one clinical finding (dark, yellow phlegm, cough, body temperature >37.8°C) or at least two minor criteria in addition to pulmonary infiltrations at x-ray (tachypnea, dyspnea, impaired orientation, pleural pain, pulmonary consolidation or a leukocyte number >12,000 cells/microL) were adopted as diagnostic for CAP.

Complete blood count (CBC) was performed using an automatic haematology analyzer (Cell-Dyn Ruby 100 test/h, 2012, Abbott). RDW analysis was assessed as a component of CBC. The normal reference interval for RDW in our hospital laboratory is 11.6-14.8%.

Subjects were divided into two groups depending on RDW (cut-off:13.05) and age (cut-off:92.5) values at time of diagnosis. Constant and category basic characteristics were compared between the groups using the independent-samples ttest and x2 test. Survival analyses between the groups were performed using Kaplan-Meier survival analysis. Prognostic variables for mortality were analyzed using the Cox proportional hazards model. A P-value of <0.05 was considered significant. The results of the univariate and multivariate Cox regression analyses are presented as hazard ratios (HRs) with 95% confidence intervals (CIs). ROC curve analysis was performed for RDW and age.

Table 1: Basal and laboratory characteristics according to cut-off level of RDW.

Table 2: Basal and laboratory characteristics according to cut-off level of age. 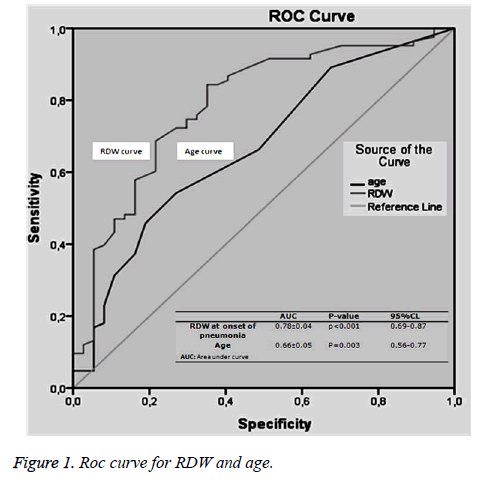 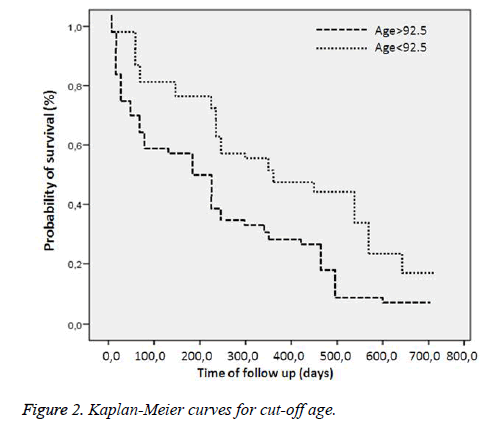 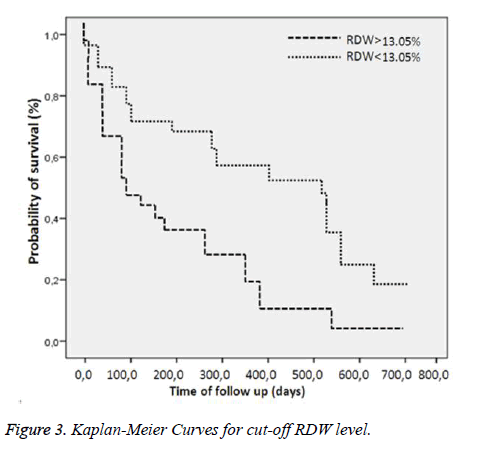 The risk of pneumonia is greater in subjects of advanced age compared to other age groups. CAP can lead to severe mortality and morbidity in the geriatric age group. This study involved super-elderly (age ≥ 90-108) subjects hospitalized in the chest diseases clinic with a diagnosis of pneumonia. To the best of our knowledge, this is the first study to investigate basal RDW, age and mortality in subjects aged over 90, with a mean age of 93.6 ± 3.9 and diagnosed with CAP. The most significant study finding is that RDW>13.05% and age>92.5 were significantly correlated with poor prognosis in super-elderly subjects with CAP.

Various mechanisms have been proposed to explain the association between RDW and mortality, although the biological mechanisms between high RDW levels and mortality are still unclear. The relation between RDW levels and CAP is also unclear. Lippi et al. suggested that chronic subclinical inflammation might be involved in the relation between RDW and mortality [18], while Weiss et al. reported that inflammation may increase RDW by compromising erythrocyte half-life, erythropoiesis and the red cell membrane [19]. Some studies have also interpreted blood RDW elevation as a result of exposure to oxidative stress. Inflammation and oxidative stress affect erythrocyte haemostasis. Although erythrocytes possess an antioxidant capacity, oxidative stress causes erythrocyte destruction and reduced life span. Eshler et al. reported that high RDW may be associated with increased oxidative stress in subjects with Down syndrome, respiratory insufficiency or receiving dialysis [20]. Patel et al. showed that decreased serum antioxidant levels were associated with RDW elevation [16]. Katsoulis et al. showed significantly lower total antioxidant status in subjects with CAP compared to a control group [21].

Other studies have reported correlations between RDW levels considered independently of other risk factors and anaemia [26], CHF [27,28], CRF [29], CHD [30], and metabolic syndrome [31]. Analysis of the entire subject group in our study revealed that RDW levels were correlated with anaemia (p=0.094) but not correlated with the other co-morbid diseases.

We determined a significantly higher mortality in subjects with Alzheimer’s disease and higher RDW level. This finding is compatible with Öztürk et al.’s study [32]. Cox regression analysis was performed in order to determine how RDW level, age, accompanying comorbid diseases and other subject-related factors affected mortality independently of one another.

High RDW>13.05% was observed to increase mortality 2.6- fold (p=0.002), advanced age>92.5 increased mortality 1.6- fold (p=0.04) and Alzheimer’s disease increased mortality 2.5- fold (p=0.003). A direct correlation between high RDW levels and advanced age and mortality was compatible with the results of other studies [14,23,24]. The difference between our research and previous studies is that all our subjects were of advanced age (≥ 90 years), with a mean age of 93.6 ± 3.9. Mean ages in previous studies were lower. To the best of our knowledge, this is the first study performed in a chest diseases clinic and specific to the super-elderly age group. Another difference is that the RDW cut-off value we calculated was also lower than those of other studies, and mortality increases significantly above that value. We therefore think that advanced age (>92.5) and high RDW (>13.05%) may be of clinical and subclinical importance independently of other factors in subjects with CAP, that they can be a predictor of mortality in the super-elderly age group and that these findings can make a significant contribution to the literature.

There are a number of limitations to this study. One is that it was performed in a single center. The fact that the study group was selected from the chest diseases department alone resulted in a relatively low subject number. The results are not therefore binding on subjects hospitalized in other departments with CAP. Another limitation of this study is that nutritional status, such as iron, Vitamin B12 and folate deficiencies, which might lead to RDW elevation, could not be documented. Nonetheless, the presence of anemia did not emerge as a factor affecting mortality at multivariate analysis.

In conclusion, this study shows that basal RDW levels are correlated with mortality in super-elderly subjects with CAP, and that RDW>13.05% and age>92 significantly increase mortality. In addition, this is the first study to examine the relationship between RDW, age and mortality specifically in a super-elderly subject group aged over 90 hospitalized in the chest diseases department with a diagnosis of CAP.

The authors wish to thank to Recep Tayyip Erdoğan University Medical Faculty staff in Rize, for their assistance.