1Department of Electronics and Communication, GLA University, Mathura, UP, India

Lungs are the vital respiratory organs of the human beings. Poor respiration leads to various Obstructive Lung Diseases (OLD) such as bronchitis, asthma or even lung cancer. Pre-diagnostic tool to predict OLD using iris images has been proposed and implemented in the current research work. Two different models have been proposed to extract significant features, viz., one using wavelets and other using Gabor filter. SVM based classifier has been implemented for classifying subjects into healthy or one with obstructive lung disease. An accuracy of 89.0% and 88.0% in case of wavelet based model and Gabor filter based model, respectively, with a sample size of 100 has been obtained.

Thin circular diaphragm that lies between cornea and lens of the eye is known as iris. It is the colored area of an eye that surrounds dark pupil. Iridology, an alternate medicine technique examines characteristics of the iris to determine the health status of rest parts of the body [1,2]. Iridology does not diagnose any diseases, it merely reveals the weakness in a particular part of the human body. Iris is like a map of the body. Left eye corresponds to left portion and right eye to right portion of human body. Iridology charts [3] divides iris into a number of sectors/zones where each sector/zone corresponds to specific parts of the body. Iridologists use these charts to compare the specific markings, such as a dark spot, circular ring, etc. of the subject with that of healthy human iris. Based upon these observations they determine which part of human body is weak and prone to suffer from disease much prior to actual symptoms.

Iris recognition, an accurate and reliable biometric system [4], identify enrolled individual based upon iris features. Few studies [5-7] combining iris recognition algorithms and iridology to determine the status of health of an individual have been reported. Stearn et al. [1] used iridology to determine hearing loss and found an accuracy of 70%. Wibawa and Purnomo [5] employed iridology in conjunction with iris recognition system and obtained an accuracy of 94% in determining the broken tissues of pancreas. Ma and Li [6] reported an accuracy of 86.4% and 84.9% for iris based diagnosis model to determine alimentary canal disease and nerve system respectively. Similarly, Lesmana et al. [7] obtained an accuracy of 83.3% for their model to determine pancreas disorder. As of now, computer aided diagnostic tools are becoming an important area of research in medical field [8-10]. Similarly, different researchers [11,12] have proposed various methods and models related to lung diseases.

In this paper, an iridodiagnosis system, combining iridology and iris recognition technique, to predict OLD has been proposed and implemented. Due to atmospheric pollution, and certain bad habits like smoking, lungs are prone to various diseases such as bronchitis, asthma or even lung cancer. These diseases are generally diagnosed using various pathological/ clinical tests at very late stage. OLD can be predicted at a much earlier stage than actual symptoms. Spirometry is the widely used non-invasive test to assess how well lungs function and is helpful in diagnosing the OLD [13]. It measures how much air one inhales, how much one exhales and how quickly one can inhale and exhale. Smoking is one of the reasons for developing obstructive lung disease. The probability of smokers developing obstructive lung disease is higher when compared to non-smokers [14-17]. Quitting smoking and following healthy diets along with regular exercises can delay if not prevent the cancer. In this paper, experiments have been carried out on iris images to predict the OLD. Two different models based on wavelets and 2D Gabor filters for feature extraction and Support Vector Machine (SVM) as a classifier has been used to predict OLD.

Iris image capture is the most important thing to implement iris based pre-diagnostic model. I-SCANTM-2 dual iris scanner of Cross Match Technologies Inc. [18] has been used to capture Iris images. Iris images from 100 subjects have been captured. Spirometry test has been used to diagnose the OLD in these subjects. This test uses two parameters, namely, Forced Expiratory Volume in 1 s (FEV1) and Forced Vital Capacity (FVC) [19]. The ratio of these parameters (ρ=FEV1/FVC) is less than 0.8 for a subject with high probability of suffering from obstructive lung disease. Spirometry test on 100 subjects was carried out and based upon spirometry test ratio, dataset was classified into healthy subjects and the subjects suffering from obstructive lung disease as shown in Table 1. Figure 1 shows the sample images captured by iris scanner. 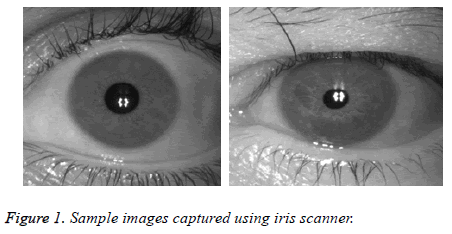 Subjects filled a questionnaire related to the health details, such as whether cough with sputum, smoker’s cough, shortness of breath, history of TB, blood in sputum. An informed written consent of each person and ethical approval from the Institutional ethics committee was taken for this research.

To obtain suitable form of iris image such that significant features can be extracted, pre-processing is required. Initially, iris region is isolated from an eye image by determining the boundaries of iris using Circular Hough Transform (CHT) [20]. Next task is to normalize iris image to eliminate dimensional inconsistencies arising due to different image capturing conditions such as illumination, distance, etc. Using Daughman’s rubber sheet model [4,21] doughnut shape of iris is converted into a rectangular array of size n × m where n represents radial resolution and m represents angular resolution. Here, value of n is 100 and that of m is 500. Further, to adjust the contrast and poor illumination enhancement of normalized iris image is carried out using local histogram analysis and thresholding [22].

The health status of a particular organ of human body is reflected at the specific segment of iris. Iridology chart [3] shows lungs of human body between 2 o’clock and 3 o’clock in left eye, whereas, between 9 o’clock and 10 o’clock in right eye. To predict OLD, Region of Interest (ROI), i.e. lungs region is segmented from the normalized iris image. In present work, the size of ROI considered is 100 × 60.

Iridologists compare the specific markings in the subject’s iris at a particular location with healthy human iris. Based upon comparison results, iridologists determine the weakness of a particular organ. For a pre-diagnosis system, it becomes important to extract significant features from an iris. Different researchers had employed various feature extraction algorithms [6,7] for automated iris diagnosis models.

Two different models have been proposed and implemented for predicting OLD. In Model-I, the salient features from the segmented lung region of normalized iris image are extracted using 2D wavelet tree and in Model-II, feature extraction is carried out using Gabor filter. 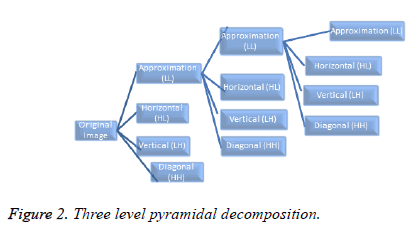 Using Gabor filter: In this model, segmented lungs region from 2D normalized iris images is convolved with Gabor filter to extract features. The 2D Gabor filter in spatial domain is expressed as:

where, (x, y) is coordinates of spatial region, σ is the standard deviation represents frequency component and θ is direction parameter of filter. Iris feature vector is created by combining 12 texture energy features computed along four different directions and with three different frequencies. Initially for each filter channel (ωi, θj) (i=1, 2, 3) and (j=1, 2, 3, 4) the segmented lungs region of iris image I (x, y) is convolved with Gabor filters h (x, y) to obtain an image S (x, y) in frequency domain. The energy for each channel was then computed as:

where, Re (S) and Im (S) are the real and imaginary part of image S (x, y). The feature vector so obtained is as shown in Equation 3.

The obtained feature vector was used for classifying the subjects into a healthy one or one prone to OLD using SVM classifier [23-26]. The SVM was proposed by Vapnik [23]. Nowadays, SVM is a popular classifier in the field of text classification, voice recognition, image recognition, pattern recognition etc. [24]. Burges [25] and Cristanini [26] provided in-depth information on SVM. It is a binary classifier and is based on the principal of structural risk minimization. In SVM, the main aim was to construct an optimal hyper plane that separates two classes. The hyper plane was constructed in such a way that the margin of separation between two classes is maximum [26,27]. In this paper, a standard SVM was created for classifying the subjects into healthy one or one prone to obstructive lung diseases.

The proposed models have been implemented using an image processing module of Matlab 7.1 on Intel Core2 Duo 1.80 GHz processor with 1GB RAM. 10-fold cross validation technique has been applied to validate the experiments. The whole dataset was divided randomly into ten equal groups. Here, nine groups were used for training the SVM and one group was used for testing. Accuracy of the system was measured for each iteration independently and overall accuracy of the system was the mean of accuracies obtained for individual iterations. Hence, there were ten iterations of training and testing the SVM. The accuracy of the proposed system was calculated by considering linear, polynomial and Gaussian RBF kernel functions for SVM.

Features extracted as discussed in the last section are used for classification of subjects into healthy and ones suffering from OLD. Table 2 depicts the accuracy of proposed method for predicting OLD. This table shows that as the level of decomposition increases, the accuracy of the proposed system increases. It has also been observed that further decomposition beyond level 5 does not lead to improvement in accuracy.

It has also been observed that performance of the system improves as the size of feature vector is increased by considering the combinations of LL coefficients. It is clear from the results that the combination of LL1, LL2, LL3, LL4 and LL5 along with RBF kernel function gives the maximum accuracy of 89.0% in predicting obstructive lung disease.

Table 3 illustrates the accuracy of proposed system with feature vector taken as a combination of LL1, LL2, LL3, LL4 and LL5 for subjects with different spirometry test ratio. 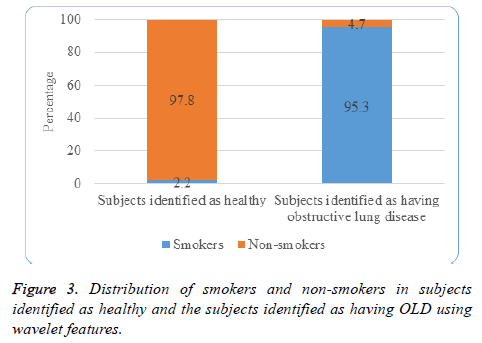 In this model, features have been extracted by convolving the segmented lung region with 2D Gabor filter. The maximum accuracy of the proposed method with these features was achieved when RBF kernel function was employed. The accuracy using 10-fold cross validation was 88.0%. Table 4 illustrates the accuracy of the proposed method for subjects with different spirometry test ratio. 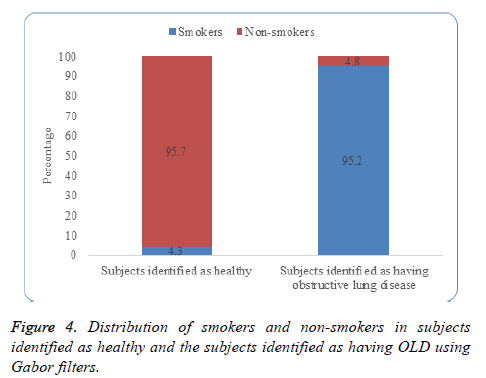 Table 5 shows the comparison of proposed models to predict obstructive lung disease with existing iridodiagnosis models. The obtained accuracy with higher sample size demonstrates the effectiveness of the proposed system.

It has been observed that system’s performance depends upon various factors [5]. The way samples of iris images were collected affects the system performance. External factors such as illumination, rotation of eyes, blinking of eyes and usage of iris scanner needs to be considered while acquiring iris images. Subject’s unwillingness to discuss their habits and health conditions with researchers is another major aspect affecting the system performance.

A system to predict the OLD using iris images has been proposed and implemented using two different approaches, namely, wavelets based and Gabor filter based. The proposed model combines iridology with iris recognition system. SVM based classifier has been implemented for classifying subjects into healthy or one prone to OLD. In comparison to earlier iris diagnosis systems maximum obtained accuracy of 89.0% with a sample size of 100 is encouraging and shows the effectiveness of proposed system. More features and advanced classifiers such as Support Tensor Machines may lead to higher accuracy.