In-vitro screening of antifungal activity of plants in Malaysia

Twelve species of local Malaysian plants and 5 strains of medically important fungi were se-lected for this study. Antifungal susceptibility test was performed to screen the antifungal activity of these plants against the selected fungi. Piper betel produced the best result in anti-fungal susceptibility testing and showed to possess antifungal property against 4 out of 5 strains of the fungus. Solid Phase extraction (SPE) technique was applied to Piper betel to achieve initial separation of active antifungal compound in the form of methanol fractions. These fractions were tested for their antifungal property. Piper betel showed the best anti-fungal activity especially against Trichophyton rubrum.

Malaysia has various types of plant species of medicinal importance. There are more than 12,000 species of plants in Malaysia [1]. From the mystical ancient medi-cation technique until today’s high technology-oriented therapy, many of these local Malaysian plants have been widely used and scientifically tested as well to explore new therapeutic properties of these plants.

One of the most important studies is to explore antim-icrobial compound in the plants. Although many scien-tific studies have been conducted in order to unleash the mystery behind the medicinal plants, yet gaps remain which need to be completed. It seems that the antifungal activity of certain plant species has not been satisfacto-rily explored. There are about 100,000 species of fungus present in the environment and more than 100 of them are pathogenic in humans [2].

The species of the plants used in this study were col-lected from three different states of Malaysia (Selangor, Melaka, Johor). Most of the species are wild vegetations in Malaysian forests and can be found even on the road-side along the North-South highway whereas the others are found in local nurseries, market places etc. The plants collected were Averrhoa bilimbi, Areca catechu, Banksia integrifolia, Bixa orellana, Cassia alata, Gar-cinia mangostana, Gynura procumbens, Labisia pumi-la, Piper aduncum, Piper betel, Piper ribesioides, Pi-per sarmentosum. Five types of medically important fungi were chosen based on their ability to infect the human. They were Aspergillus flavus, Candida albicans, Microsporum canis, Trichophyton mentagrophytes and Trichophyton rubrum.

Fungi were cultured on Sabaroud’s Dextrose agar (SDA) and KOH preparation was used for microscopy. Col-lected plant species were processed for extraction. Plants were dried, powdered, macerated and crude extracts were collected using standard methanol extraction proc-ess. Discs were prepared using these crude extracts for antifungal susceptibility test. All the discs prepared from crude plant extracts were tested for their antifungal ac-tivity. Standard Disc Diffusion method [3] was used for this purpose.

The plant extract that produced the best antifungal activ-ity against the fungal strains tested was aimed to be frac-tionated. Solid Phase Extraction (SPE) technique [4] was applied in order to predict the location of the active anti-fungal compound using methanol.

Antifungal susceptibility test (using the original plant extracts without separation), was carried out using the disc diffusion method. The overall results are summa-rized in the Table 1 below: 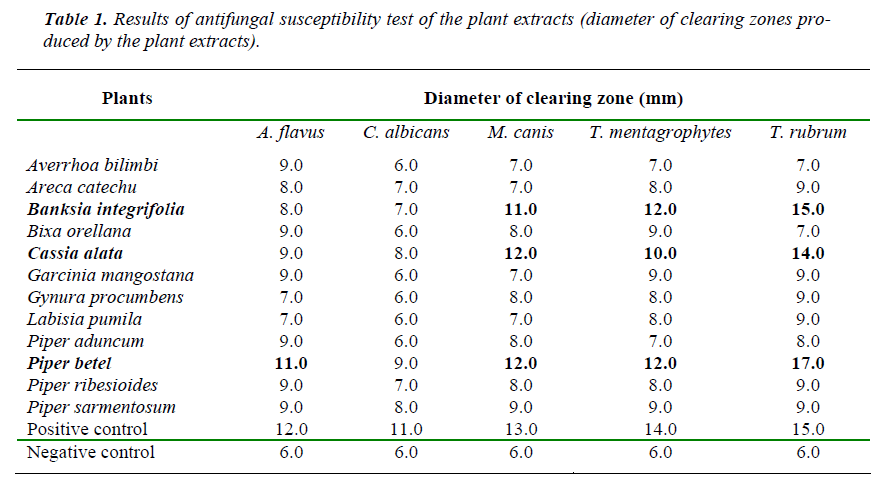 P. betel was separated into different methanol fractions. Methanol fractions were pipetted onto blank discs with the ratio of 100 μl of the fraction per disc. After 24 hours of incubation at 300C with the discs, clearing zones of 7 mm and 14 mm in diameter were produced by 40% and 50% methanol fractions, respectively. Another series of fractionation was run on the same plant using different concentration of methanol (30%, 70%, 90%) and was tested against T. rubrum. 40%, 50% and 60% methanol fractions of P. betel were also tested against the other 4 species of fungus. 10 mm diameter of inhibition zone was produced against Aspergillus flavus, 10 mm against Trichophyton mentagrophytes, 11 mm against Micro-sporum canis and 9 mm on Candida albicans. 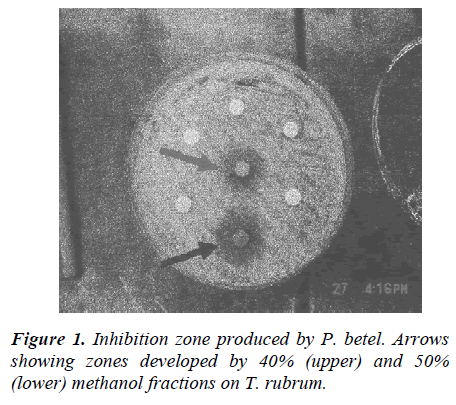 The antifungal-related study on plant species is quite rare in Malaysia. It is important to study every aspect and every detail of the plant species known to have me-dicinal values. In this study, antifungal property of the plants was examined. For this purpose, Sabaroud’s Dex-trose Agar (SDA) was used for culture and susceptibility test. Production of inhibition or clearing zone was care-fully observed from time to time. A clearing zone of 10 mm was chosen as the cut off point to indicate the pres-ence of significant antifungal property of the plant frac-tions. Different size of zones of inhibition was observed when different extracts were assayed. Safety and sterility measures throughout the experiments were maintained to obtain significant results, to avoid contamination and infection as well.

For antifungal susceptibility test (using the original plant extracts without separation) only 3 (25%) among the 12 local plant species had shown positive activity towards the fungi or had the ability to suppress fungal growth. They were Piper betel (Sireh Melayu), Bunksia integri-folia (Berus Botol) and Cassia alata (Gelenggang). The rest had low activity against the fungi, or did not show the ability to stop fungal growth. Piper betel was re-ported to have antibacterial activity [5] but its antifungal activity has never been explored before us. However, P. betel extract was also found to reduce acid producing properties of certain bacteria [6]. In this study, P. betel showed antifungal activity towards the maximum num-ber of fungi tested. P. betel produced a diameter of clear-ing zone of 11 mm against A. flavus, 12 mm against M. canis, and 12 mm against T. mentagrophytes and 17 mm against T. rubrum. P. betel’s antifungal activity against C. albicans was the least (9mm) compared to other fungi tested.

P. betel was selected for fractionation and was separated into different methanol fractions as it showed significant antifungal value in the preliminary antifungal suscepti-bility test. After 24 hours incubation of its 50% metha-nol fraction at 30°C, the result showed a clearing zone of 14 mm in diameter (7 mm larger than the 40% fraction’s inhibition zone, 3 mm less than the inhibition zone pro-duced by the original extract) against T. rubrum. The results suggest that 50% methanol fraction of P betel has a significant antifungal property.