Zinc oxide nanoparticles (ZnO NPs) are considered as a unique and key nano material. They have attracted wide-ranging research due to their distinguishing properties and their new applications in the fields of nanoscience and technology. ZnO NPs has numerous properties like piezoelectric, pyroelectric, semiconducting, optoelectronics and catalysis [1]. ZnO is an ntype semiconductor with and high band gap energy of 3.37 eV and a large exciton binding energy of 60 meV. Due to their high surface-to-volume ratio, ZnO NPs have gained various chemical and physical properties. ZnO NPs can be prepared by several approaches, which includes the chemical vapor deposition [2], hydrothermal synthesis [3], vapor-liquid-solid (VLS) [4], zinc oxidation [5], vapor phase deposition [6] and metallorganic chemical vapor deposition [7] respectively. Among these methods, vapor-liquid-solid and hydrothermal synthesis are the widely used for preparing ZnO NPs. In recent times, biosynthesis of nanomaterials was achieved by using plant extracts, natural biomolecules and microorganisms because of their cheap, non-hazardous, eco-friendly and biodegradable nature. On the other hand, the dispensability of ZnO NPs can be improved by surface stabilizing agents, which can be easily achieved by green synthetic approaches. Several eco-friendly methods have been used for the preparation of ZnO NPs [8]. For instance, extract of Aloe barbadensis Miller leaf is already been reported for the preparation of water dispersible ZnO NPs [9]. In the present work, Argemone maxicana plant extract have used for the ZnO NPs synthesis using green chemistry principles. It is well known that the plant extracts play key role in the synthesis various nanomaterials such as silver nanoparticles [10], graphene [11,12] etc. The bioconstituents that are present in the Argemone maxicana extract are mainly responsible for reduce of Zinc nitrate to ZnO NPs. Further, the in-vitro cytotoxicity of the prepared ZnO NPs against the cardiac cell lines of Catla catla was studied.

Argemone maxicana plant leaves were washed with double distilled water to remove the dust particles and dried under sunlight. About 20 g of cleaned and dried leaves were finely cut into powder and boiled in 100 mL of distilled water for about 40 min. The obtained extract solution was then cooled down to room temperature and filtered through cellulose nitrate membrane to obtain clear extract solution. The obtained extract was then stored in refrigerator for future experiments.

For the synthesis of NPs, 50 mL of Argemone maxicana leaves extract was taken and boiled at 60-80°C by using a stirrerheater. Then, 5 g of zinc nitrate was added to the solution as the temperatures reached at 60°C. This mixture was then heated to obtain a deep yellow colored suspension. This paste was then collected in a ceramic crucible and kept for heating in a furnace for about 2 h at 400°C. A light white colored powder was obtained and used for future characterizations and cytotoxicity studies. The material was powdered using a mortar and pestle so, that got a fine powder, which is easy for further characterizations.

The Sahul India Catla catla fish heart cell lines (SICH) were maintained in Leibovitz'sL-15 medium at 28°C and pH 7.0-7.4, supplemented with 2 mM L-glutamine, streptomycin 100 μg/mL, penicillin 100 IU/mL and 10% fetal bovine serum (FBS). Later, the cells were sub-cultured by following a standard procedure for about every two to three days. Actively growing cells were harvested in exponential growth phase and diluted to 105 cells/mL in Leibovitz'sL-15 medium. Then the cells were shaken for mixing and added to each well in 96-well tissue culture plate at the concentration of 2 × 104 cells/well which followed by incubation at 28°C for over night. The supernatant in all the wells was trowed followed by the addition of medium containing 3, 6, 9, 18 and 36 μg/mL of Zn(NO3)2•6H2O and ZnO NPs and left for 24 h for cell viability analysis. On the other hand a control experiment was performed without zinc salt and ZnO NPs.

MTT assay was conducted to know about the percentage viability of cells. After the exposure of ZnO NPs for 24 h to the cells, the medium was trowed out and 20 μL of MTT reagent in PBS (5 mg/mL) was added followed by incubation for 4 h at 20°C. The solution was then carefully removed, and the cells were rinsed with PBS buffer for two times. Later, DMSO (150 μL/well) was added to cells and each well was measured for their optical density at 490 nm.

A D8-Advanced, Bruker diffractometer was used to obtain the XRD pattern of the obtained ZnO NPs from 20° to 70° in 2θ with Cu Kα (λ=0.1546 nm) radiation. Optical absorption of ZnO NPs was obtained by using a UV-vis (Perkin Elmer Lambda 950) spectrophotometer. A JASCO-FT-IR instrument was used to know about the surface capping of the obtained ZnO NPs. Additionally, the morphology, size of the ZnO NPs sample was characterized by using LEO 1530FEGSEM Scanning Electron Microscopy instrument. A simultaneous measurement of chemical composition was analysed using BRUKER INDIA energy dispersive spectroscopy instrument. Photoluminiscent spectrum for the prepared ZnO NPs was analysed by using Hitachi fluorescent spectroscopy instrument. 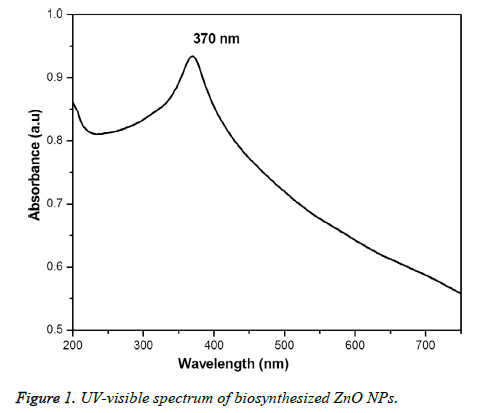 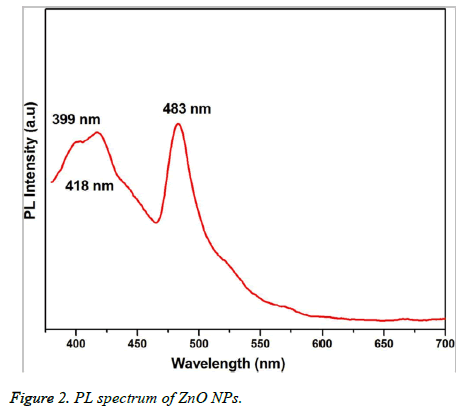 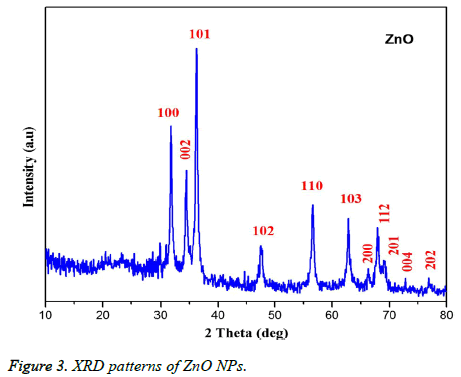 Figure 4, showed the SEM images of ZnO NPs at different magnifications. From the figure, it can be seen that the obtained ZnO NPs are in the size range from 100-190 nm with cubic structure. Additionally, the EDS spectrum of ZnO NPs showed the presence of elemental peaks to corresponding to Zinc and Oxygen (Figure 5). Figure 6 represented the FT-IR spectra of ZnO NPs synthesized from aqueous leaf extract of Argemone maxicana plant by a biosynthesis approach. Figure showed the presence of absorption bands at 768, 710 and 849 cm-1 corresponding to the aromatic C-H out of plane bending vibrations in a typical 1,2,3 tri-substituted benzene ring, mono substituted benzene ring and 1, 4 di-substituted benzene ring. The presence of band at 1029 cm-1 is characteristic to C-N stretching vibrations of amine functional group [13]. On the other hand the absorption bands existed in the region 1411- 1617 cm-1 is related to aromatic ring vibrations. The two weak IR band absorptions in the region of 2900-2750 cm-1 further indicated the existence of aromatic aldehydes [14]. Similarly, the weak absorption band present at 2049 cm-1 is because of the C≡C vibrational stretching. The intense and broad band existed at 3237-3565 cm-1 is corresponding to OH stretching vibrations. The absorption band at 450-540 cm-1 indicated the presence of ZnO NPs. 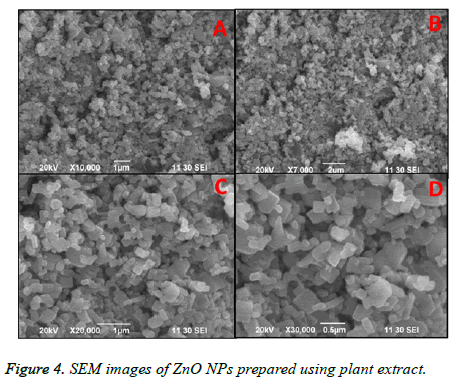 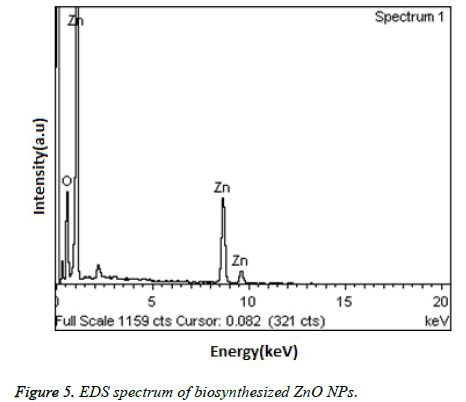 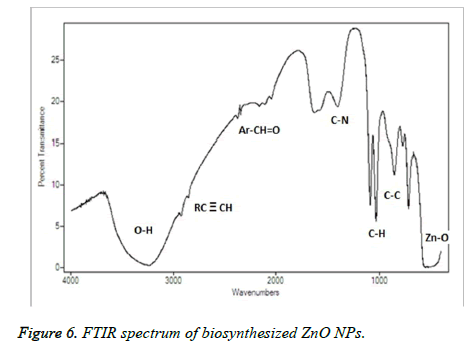 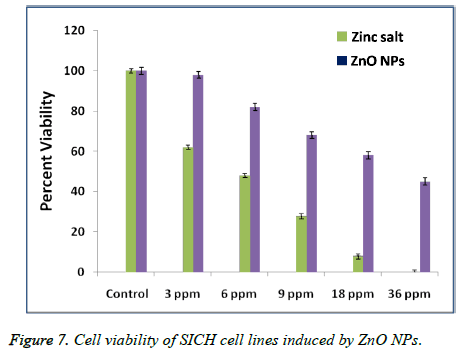 The initial formation of ZnO NPs was identified by visual color change of reaction mixture to deep yellow color during the synthesis. It is interesting to note that the reaction is completed in 3h at 60°C to 80 °C, which is comparatively less and faster than the previous reports [15-17]. UV-visible spectrum (Figure 1) showed the presence of absorbance peak at 370 nm, which is due to their large exciton binding energy at room temperature. The optical absorbance at 370 nm further confirmed the slight blue-shift in the absorbance when compared to that of bulk material (i.e. 377 nm). However, this slight blue shift in the optical absorbance may be due to the quantum confinement effect of nanoparticles. The PL spectra of ZnO NPs represented in Figure 2, showed the luminescent region between 418-483 nm, which is because of the various defects like the presence of interstitial Zn and also due to the existence of the donor and acceptor states in the region between the conduction and valence bands. On the other hand, the ZnO NPs also exhibit strong emission in visible region due to the deportment of open flaws, which may be due to the increased high surface to volume ratio with decrease in the size in case of ZnO NPs. This resulted in the formation of a large number of defects on the surface of ZnO NPs.

From the XRD pattern (Figure 3), it is found that all the peak intensity values were characteristics to the hexagonal wurtzite structure of the synthesized ZnO NPs. The narrow and stiff diffraction peaks showed in the XRD pattern further indicated the crystalline nature of the ZnO NPs. However, no other crystalline impurities and remarkable shift in the diffraction peaks are observed indicating the purity of the obtained product. On the other hand, the anisotropic growth in the ZnO NPs is confirmed by the presence of a relatively high intensity of (101) peak, which indicated the preferred orientation of the crystallites. Also, the XRD patterns showed the planes values which are in good agreement with JCPDS No: 89-7102 [18,19]. The formation of ZnO NPs by Argemone maxicana plant extract is also showed by EDS analysis. From Figure 5, it represented the presence of oxygen and zinc peaks confirmed the ZnO NPs formation. On the other hand, presence of no peaks corresponding to impurities further indicated the purity of the prepared ZnO NPs. FTIR spectrum gives information about the various functionalities present on surface of ZnO NPs (shown in Figure 6). From the FTIR spectrum the presence of absorption band in the region of 450-540cm-1 confirmed the formation of ZnO NPs. On the other hand, the broad absorption bands in FTIR spectrum existed at 1614, 3237, 2900 cm-1 indicated the presence of aldehydes, hydroxyl and amine functional groups on the surface of the prepared ZnO NPs [13,14]. Similarly, the vibrations corresponding to the aromatic ring further confirmed that plant biomolecules could increase the stabilization of ZnO NPs in the aqueous medium via capping. All these results confirmed the formation of ZnO NPs stabilized with Argemone maxicana plant extract biomolecules.

In the present work, we have also tested the in-vitro cytotoxicity of ZnO NPs of increased concentrations prepared by using Argemone maxicana plant extract, to know whether biosynthesized ZnO NPs can exhibit a toxic effect on SICH cell lines. The results that are obtained after exposing to ZnO NPs have demonstrated that the cytotoxicity of nano ZnO is dose-dependent. However, these results are similar to the previous reports with other noble metal NPs against cancer cell lines. For example, Sireesh babu et al. have reported the concentration dependant cytotoxicity of AuNPs against human lung and colon cancer cell lines [20]. In contrast, Johnston et al. have reported the non toxic nature of spherical gold NPs when compared to gold nano rods which are more toxic [21]. However, these results indicated the dependence of cytotoxicity of nanomaterials on morphology and functional groups that are present on the NPs surface. From the Figure 7, it is found that the cytotoxicity of the synthesized ZnO NPs is dose dependent. On the other hand, the comparatively less cytotoxicity of the biosynthesized ZnO NPs with that of Zinc salt may be due to the Argemone mexicana extract biomolecules that are coated on the surface of NPs, which further enhance the cell lines growth resulting their increased viability after exposure to ZnO NPs.