Introduction of highly active antiretroviral therapy (HAART) has been proved to be very effective against HIV infection and AIDS progression. It has made a great contribution to decrease both HIVinduced AIDS mortality and morbidity. In this study, we aim to investigate the efficiency of HAART as the treatment for newly diagnosed HIV patients as well as survival time of patients. 3100 cases of newly diagnosed HIV patients receiving HAART were selected in this study for a period of 12 months. The level of viral RNA, numbers of CD4+ T cell and death cases were recorded monthly. With the 12 months of HAART treatment, the net increased numbers of CD4+ T cell were of 4.3 × 103 cell/ml in average (P<0.01). Viral load dropped to an undetectable level (below to 1.70 log copies/mL) after 8 months treatment. In conclusion, HIV/AIDS patients received significantly benefits by administrating HAART.

The acquired immunodeficiency syndrome (AIDS) is a human disease caused by the human immunodeficiency virus (HIV), a lentivirus which belongs to a subgroup of retrovirus [1]. As the prefix “Lente” of lentivirus means “slow” in Latin, HIV infection in human causes progressive failure of the immune system, even results in life-threatening infection by opportunistic infections or the occurrence of cancers [2]. Without any intervention, the average survival time of HIV infected individuals is ranging from 9 months up to 11 years, depending on the subtype of HIV [3]. Since the first official publication described this virus [4,5], tremendous efforts had been contributed to elucidate the viral pathogenesis, discover specific drugs for HIV or develop a prophylactic vaccine. However, till now, there is still no vaccine available and only failed clinical trials were reported. Currently, treatment of HIV still heavily relies on the combined administration of different drugs which is named as the highly active antiretroviral therapy (HAART).

Although HIV cannot be completely cured, the introduction of HAART has been proved to be very effective against HIV infection and AIDS progression [6]. It has made a great contribution to decrease both HIV-induced AIDS mortality and morbidity [6]. Moreover, the survival time and life quality of HIV infected patients had been improved significantly as well [6].

In this study, an investigation of survival time and quantification of therapeutic benefits for the newly diagnosed HIV patients who were enrolled in the HIV antiviral treatment centres of Guigang City for HAART were conducted. During a 12-month monitoring period, the total amount of the CD4+ T cells, the net increased number of CD4+ T cells and viral copies in peripheral blood were quantified and compared. The overall survival rate was recorded as well.

The protocol used in this study had been reviewed and approved by Medical Ethics Committee of Guigang City, Guangxi Province. All participating patients were formally informed for the purpose of using their samples in this study and a letter of consent had been signed by all involved patients.

3100 newly diagnosed HIV patients (2169 males and 931 females) who were enrolled in the HIV antiviral treatment centres of Guigang city from April 2007 to April 2014 were included in this study. Patients receiving HAART prior to enrolling in this centre were excluded. All patients were positive for anti-HIV antibody test and the CD4+ T cell number were less than 350 cell/μL. The average age of all patients was 33.8 ± 4.6 years (ranging from 18 to 68 years).

To minimize the affection of general information to the final result, we conducted a systematic analysis for the gender, age and therapeutic protocol used to patients associated with their treatment outcomes. However, there was no significant difference observed.

For all 3100 cases participating in this study, plasma HIV RNA level and CD4+ T cells number was examined monthly or bimonthly, respectively. The death of patient was set-up as the endpoint of following-up. The death cases were recorded bimonthly as well and used for calculating the survival rate.

Data are presented as means ± standard deviation (SD). The data of the CD4+ T cell number, viral copies and the survival rate were analysed by SPSS software (version 13.0) for the regression analysis. Comparisons between different groups were subjected to the Student’s t test. A two tailed P-value of less than 0.05 was considered significant.

The average number of CD4+ T cells in patients’ blood before HAART was 2.31 × 105 cell/ml. After receiving the therapy, the numbers of CD4+ T cells were monitored in every month. The cell numbers were stably increasing; and at time point of the 12th month, it reached to an average number of 6.61 × 105 cell/ml, which showed a statistically significant increase compared to non-treatment. By inputting the average CD4+ T cell number as Y coordinate and months after therapy as the X coordinate to generate the graph, we performed the regression analysis for the X and Y coordinates. The results were listed as Figure 1. The logarithmic curve function could be described as: y=184.94ex+2.6.72, R2=0.9864. Based on this logarithmic curve, we got the relation between the net increased T cell number and the time after receiving therapy. The result was described as Figure 2. 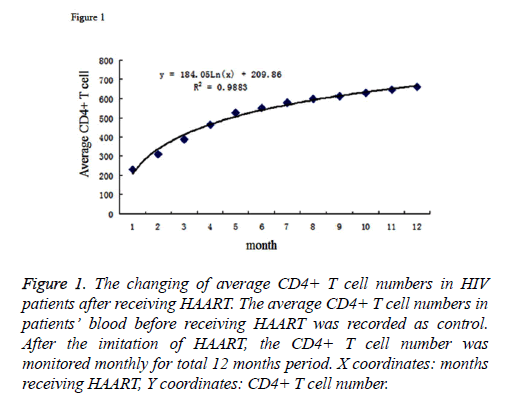 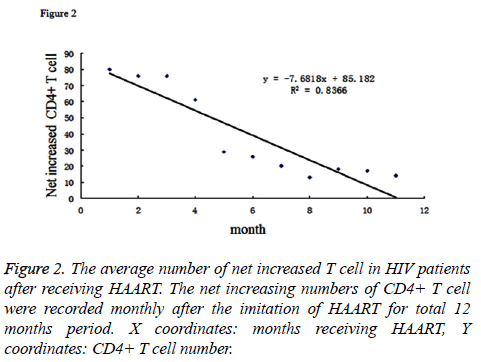 By analysing the Figure 2, it could demonstrate that the average number of net increased T cells became decrease as the time receiving HAART increased. If we performed the regression analysis for the net increased T cell (Y coordinates) and the time receiving HAART (X coordinates), their relation could be described as the linear function: y=-7.6818x+85.182, R2=0.8366. Taken together, our data indicated that the HAART was very effective in the early stage of treatment which could be reflected by net increased number of CD4+ T cell in patients’ blood, however, as the time elapsed, the efficiency reduced. Reasons why caused the decreased efficiency of HAART could be due to generation of drug-resistant mutation of virus, or poor compliance of the patients for taking drugs.

In the patients receiving HAART therapy, we also monitored HIV RNA copy numbers in their blood. Since the initiation of the therapy, the RNA level decreased from 6.1 log copies/mL to about 1.7 log copies/mL. The relevance between the viral copies (Y) and the time receiving therapy (X) can be described as the function: y=-0.4538x+6.3833, R2=0.9475 (Figure 3). Furthmore, we analysed the correlation of viral RNA copies and the CD4+ T cell numbers by SPSS. The result demonstrated that R2=-0.867, which demonstrated the CD4+ T cell number was negatively correlated with the viral copy numbers. 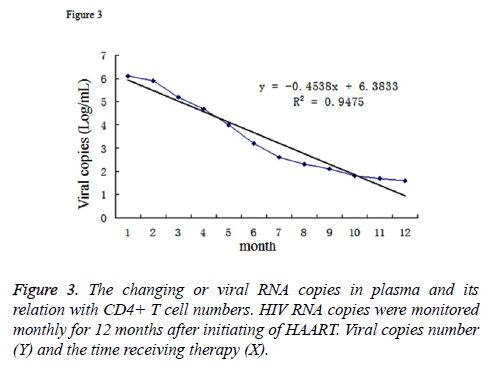 Figure 3: The changing or viral RNA copies in plasma and its relation with CD4+ T cell numbers. HIV RNA copies were monitored monthly for 12 months after initiating of HAART. Viral copies number (Y) and the time receiving therapy (X).

During the whole therapy period, death cases of the patients had been documented as well. There were 190 death cases reported totally. Moreover, 76 cases ceased the treatment and other 527 cases were lost to follow-up for more than 6 months. These above cases were not included in the prediction model. To make a prediction model for the time of therapy and the surviving rate, we conducted the COX analysis for the surviving data of the patients and generated a survival curve by Kaplan Meier method (Figure 4). This curve demonstrated that the total survival rate in two years for HIV patients receiving HAART could reach to 87%. 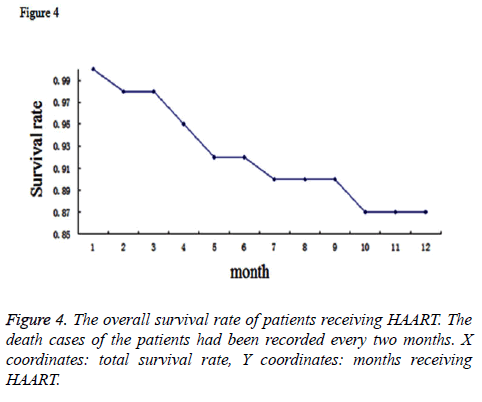 Since the first official announcement of HIV [4,5], tremendous efforts had been made to develop a HIV specific drug for therapeutic purpose. The zidovudine (AZT), the first nucleoside reverse transcriptase inhibitor (NRTI) approved in United States in 1987, was once demonstrated promise results for the healing of HIV [9]. Unfortunately, people further found that HIV has the potential to develop drug-resistance mutation during the long term treatment of AZT due to the low fidelity of reverse transcriptase [10]. Since drugs targeting different step of HIV replication were unavailable before 1997, solely or combined administration of NRTI lead to the development of multi-drug resisted mutations [11]. Therefore, HAART had been developed by combining drugs targeting different step of HIV replication, such as HIV entry inhibitor, NRIT, nonenucleoside reverse transcriptase inhibitor NNRIT, integrase inhibitor as well as protease inhibitor [12-16].

It had been demonstrated that HAART could delay the progression of AIDS effectively and improved the life quality of the patients. Application of HAART could minimize the viral load in HIV patients’ blood or even to an undetectable level. The reduced viral load could help the patients maintaining or improving their immune function via increase the CD4+ T cells, which is necessary to prevent the opportunistic infections and extend the surviving time of patients. In our study, we found that the total CD4+ T cell number increased in every patient receiving the HAART. The absolute increasing cell number level was much higher in the first 4 to 5 months but reduced to a lower level soon in the following months. In the contrast, the viral load reduced stably as a linear trend.

The CD4+ T cell is the major target of HIV. However, it is still unclear that HIV only infects a very small proportion of CD4 T cells (estimated at 1 in 100 to 1 in 1,000) could finally overwhelm the renewal capacity of CD4+ T cell and result in the destruction of the whole immune system [2]. In our study, although patients receiving HAART indeed showed a reduced plasma viral load and improved CD4+ T cell numbers, there was still death cases reported. Our data suggested that the death were mainly occurred during the first 6 months after therapy. Since then, the death rate started to decline, which is consistence with previous reports. Moreover, it was reported that the overall survival rate was benefited from the earlier initiation of HAART [17]. These death cases observed in here may be due to a later diagnosis and initiation of HAART.

It had been confirmed that using HAART could restrain the replication of HIV to a low level for long term. Thus, it could restore the immune function and extent the patient’s life. However, application of HAART alone cannot clear the HIV completely due to existence of pro-virus in memory T cells or virus entering the central nerve system. Once the HAART stops, the virus starts to replicate again and the viral load in blood will recover to the pre-treatment level. However, the side effects and toxicity of long term application of HAART still need to be considered, as well as the causing of the drugresistant HIV mutant. In conclusion, our data demonstrated that HAART are highly effective in newly diagnosed HIV patients and the HIV/AIDS patients received significant benefits from application of HAART.