Investigation of Clinical and Laboratory Findings of 26 Cases with Crimean-Congo Hemorrhagic Fever.

The objective of the present study was to analyze demographic-epidemiologic features, laboratory findings and mortality rates of cases with Crimean-Congo Hemorrhagic Fever (CCHF). CCHF is an acute and severe hemorrhagic fever syndrome, caused by nairovirus transmitted by ticks, presenting with fever and hemorrhages. Twenty-six cases with CCHF admitted to the Emergency Department of Yozgat Public Hospital due to tick bites between 01.04.2007 and 30.07.2007 were enrolled in the present study. Mean age of the patients was 38.9±15.9 years. The majority of the cases was farmers and admitted to hospital mainly in April 2007. The commonest symptoms were fever, fatigue, nausea and vomiting. While thrombocytopenia and leucopenia were most commonly seen as hematological findings, AST, ALT, LDH and CPK were increased in more than half of the patients. One patient died during hospitalization. Viral disease associated with hemorrhagic changes was considered in cases of admission to the emergency department with symptoms such as hemorrhage from one or more sites of the body without any trauma, fever, lassitude, fatigue, headache and with thrombocytopenia, leucopenia or increased levels of the liver enzymes.

CCHF cases are frequently reported in some provinces in Turkey such as Tokat, Yozgat, Cank?r?, Corum and Sivas (Figure 1). These cities are located in the middle and near the northern part of Anatolia. These are generally steppes and mountainous and rural areas. Here, the majority of population lives in urban area. People living in these areas usually engage in agriculture and livestock. In Turkey, cases due to tick bites are reported throughout Anatolian region, and they were often severe and sometimes fatal [3]. 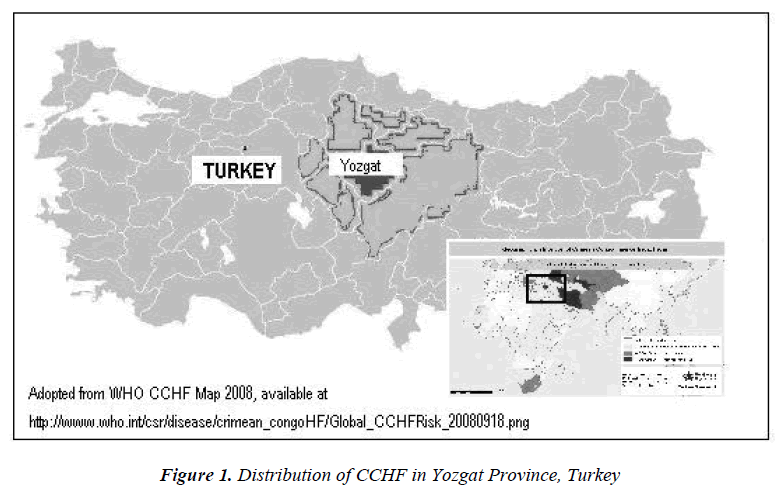 CCHF cases attracted attention especially in the spring and the summer of 2002 and 2003 in Turkey. There were two epidemics seen in the inner Black Sea and the Eastern Anatolian region including cities such as Tokat, Yozgat, Çank?r?, Çorum, Sivas, Erzurum and Amasya [4,5].

Attending ticks can be seen everywhere especially in grasslands, stock farms, forests and bushes. CCHF has an incubation period of 1 to 3 days after tick bites but it can vary up to 9 days depending on the location of the bite. Incubation period is 5 to 6 days and up to 13 days when it is transmitted from infected body fluids and blood. CCHF caused by RNA virus, which is more severe and fatal in humans [1,6].

In this study, it was aimed to investigate the demographic, epidemiologic properties, laboratory findings and mortality rates of CCHF-infected cases at the Yozgat Central Hospital emergency clinic.

A total of 26 cases, 24 confirmed with polymerase chain reaction (PCR) positive and 2 confirmed with enzymelinked immunosorbent assay (ELISA) attending Yozgat Central Hospital Emergency Clinic after tick bite between 01.04.2007 and 30.07.2007 were included in this study.

Gathered data were evaluated by the software SPSS 11.5 (Statistical Package for Social Science). Data were presented as the mean and standard deviation. In the comparison of two independent groups and categorized variables, Student t test and Chi-Square (Fisher’s exact) test were used, respectively, and P > 0.05 was accepted as statistically non-significant (NS). 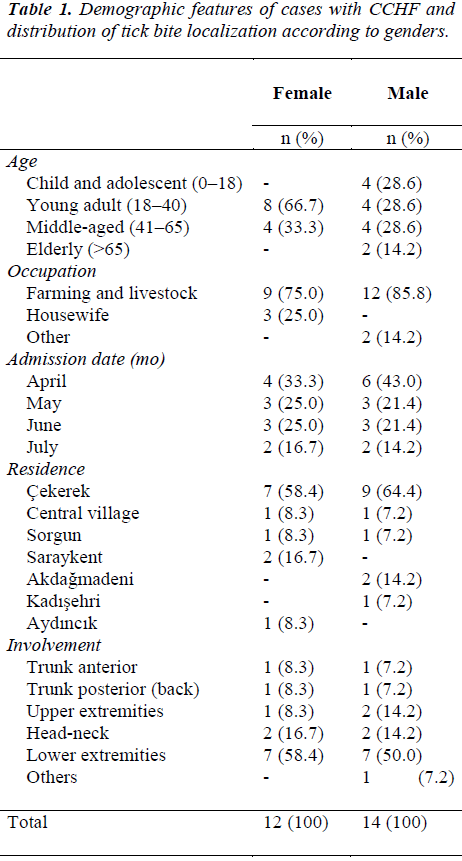 Table 1: Demographic features of cases with CCHF and distribution of tick bite localization according to genders.

When the cases were evaluated in terms of their residential origin, there were two cases from central villages and 24 cases from town villages. Among the towns, Çekerek was ranked first with 16 cases, and Ayd?nc?k and Kad?sehri were ranked the last with one case each (Table: 1). The majority of cases were seen in north-eastern part of Yozgat (Figure: 2). 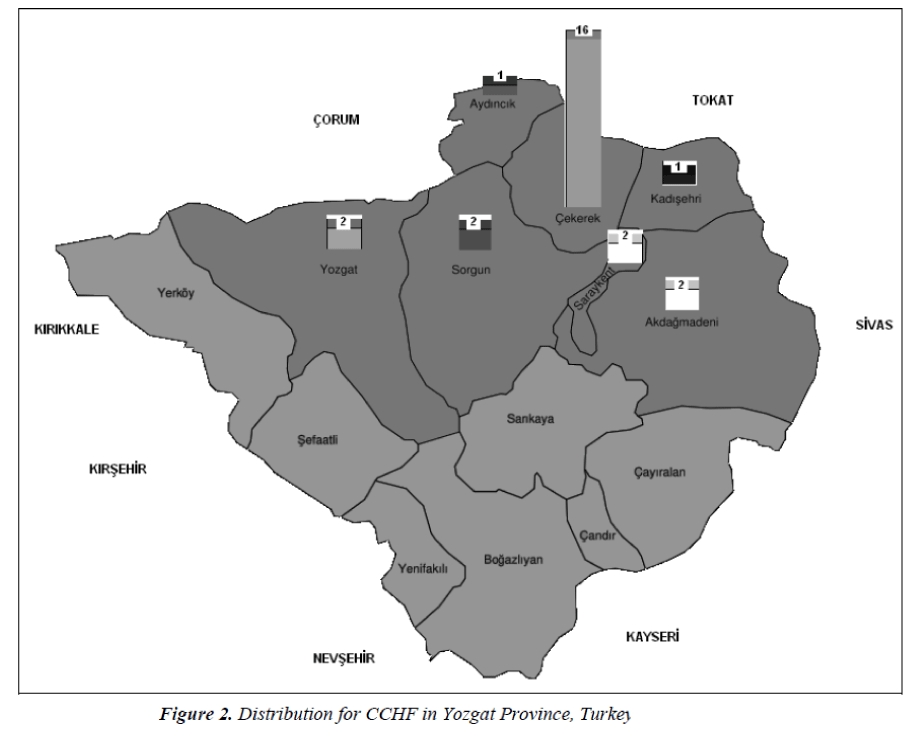 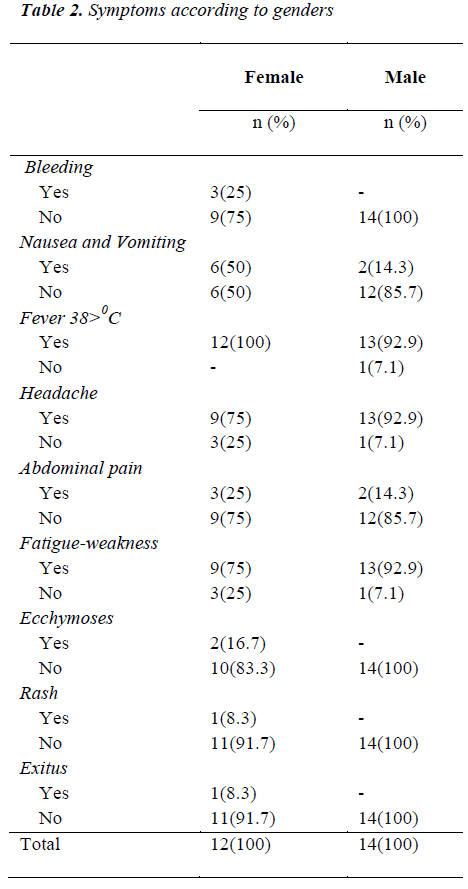 Table 2: Symptoms according to genders

In Table: 3, the initial laboratory findings of the CCHF cases on presentation were compared in terms of their gender. Levels of thrombocyte were lower than 150.000 /mm3, and levels of AST, ALT and LDH were found to be higher than the normal for both genders. CK levels of males were significantly higher than those of females (female CK: 153.8±43.3 vs. male CK: 327.1±271.8, p=0.006). 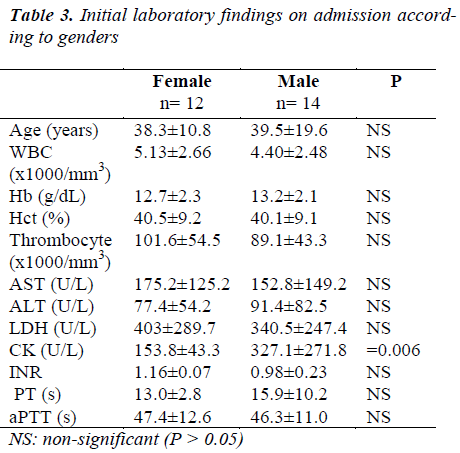 Table 3: Initial laboratory findings on admission according to genders

In Table: 4, laboratory findings of CCHF cases on arrival and one day after were evaluated. On arrival, it was found that the level of thrombocyte was lower than 150.000 /mm3, and levels of AST, ALT, CK and LDH were higher than the normal. Laboratory analysis showed lower WBC, hemoglobin (Hb), hematokrit (Hct) on the next day, whereas AST, LDH and CK levels were significantly higher. 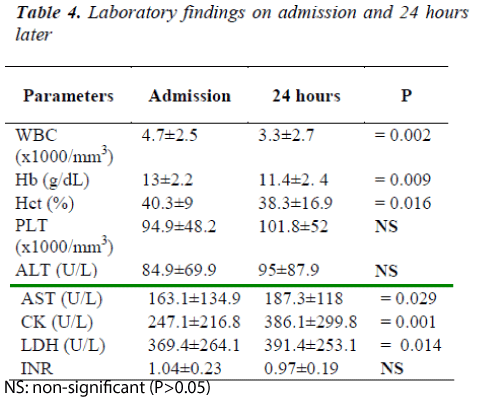 Table 5: Laboratory findings on admission according to abnormal blood results between the male and female.

Of 26 patients, 18 patients required tertiary health care, after having hospitalized into infectious disease unit from emergency room, and transferred to the health center with advanced facilities. Eight cases were discharged with relieving from service of infectious diseases unit. Eleven out of 18 referred patients were admitted in the intensive care unit of tertiary hospital. Ribavirin treatment was administered to those cases along with the support in therapy. One of 11 patients with CCHF was died due to severe gastrointestinal bleeding. The remaining cases were able to be discharged from the intensive care unit. Mortality rate was 3.8%.

The middle, northern and eastern parts of Anatolia in Turkey, are endemic region for CCHF [7-9]. Yozgat, situated in the middle part of Anatolia, has a suitable environment for ticks spreading CCHF due to its geographic structure, climate and lifestyle of people living in this city. Many patients presenting with fever, fatigue, weakness and bleeding were admitted to the emergency rooms in those hospitals from this region. Therefore, detailed history, physical examination, some laboratory tests should be carefully evaluated and differential diagnosis for CCHF should be kept in mind, especially in the province of Yozgat.

Tick bites are especially seen in livestock farmers and agriculturists [7-11]. It is known that cases with tick bite in our country show seasonal pattern and usually occurred during the spring and the summer period [7,10,11]. In our study from April to July 2007, CCHF was diagnosed mostly in the livestock farmers and agriculturists, who were usually young adults and the adults working in open field and taking care and cleaning of animal barns. It is interesting to note that except two cases, all the infected patients were from the villages of northern and eastern parts of Yozgat which are close to the cities, such as Çorum, Tokat and Sivas. When tick bites and their consequences are investigated, most of the tick bites are recorded over the head and neck, the lower extremities and the arms [7,10,12]. In this study, tick bites were also mostly seen in the lower extremities, and the head and neck region. It is significant that tick bites are seen in the bare/exposed areas of the body in all studies.

CCHF spreads by the bite of infected ticks or through contact with infected bloods and body fluids of people and animals [1,2]. In our study, all cases were infected by the tick bite. In the literature, nosocomial transmissions were reported. In our hospital, because of universal precautions being carefully extended, we had no nosocomial transmission in any of the health care workers.

For diagnosis of the disease, isolation of the virus from blood and tissue samples, serology of the viral antigens, and antibodies against the viral antigen are used. Antibodies can be analyzed by ELISA serologically. PCR molecular biological methods are also used in diagnosis [2,5,9]. Immunoflourescent test can also be performed to confirm serology of cases. In our study, diagnostic test were performed in Refik Saydam H?fz?s?hha Research laboratories of the Department of Health of Ministry. Twenty-four of our cases were viral RNA positive with PCR, 2 of the cases were IgM positive with ELISA.

Clinical progress of CCHF changes from mild to moderate or severe. Initial symptoms differ from patients to patients. The symptoms include fever, headache, dizziness, fatigue, myalgia, nausea, vomiting and diarrhea. It can progress into shock, coma, hepatic, renal and respiratory failure in the later days [5,9,13]. Generally, recovery time of patients takes 10 days. In our study, clinically mild or moderate cases generally had fever, dizziness, nausea and vomiting. In severe cases, bleeding was seen along with fever.

Leucopenia and thrombocytopenia can be observed as laboratory findings. Biochemical analysis showed elevated levels of ALT, AST, GTT, CK and LDH. Bleeding time, PT and PTT are prolonged [3,5,7,9,14]. In our study, leucopenia and thrombocytopenia were the commonest hematological findings. More than half of the cases had elevated levels of ALT, AST, LDH, CK but there was no significant increase in PT, aPTT, INR measurements as seen on arrival. CK elevation in male patients was higher than that in the female patients. It might be due to more muscle body mass in males. On comparison, laboratory findings of the cases with CCHF on arrival and the day after, WBC, Hb and Hct levels decreased while AST, LDH and CK levels increased. Therefore, serial laboratory investigations can be used to monitor patients’ condition.

In case of non-traumatic, chronic bleedings in single or multiple parts of the body together with complaint of fever, weakness, fatigue, with laboratory findings of leucopenia, thrombocytopenia, elevated liver enzymes, and an altered clotting tests on arrival to emergency room; one should take viral hemorrhagic diseases into consideration. A good anamnesis is usually helpful for differentiating bleeding disorder, such as congenital bleeding disorders, medication overdose or hepatic failure [15]. A detailed physical examination and laboratory analysis must be performed as well. In our study, being endemic in this region, tick-bitten people with one or more abnormal laboratory findings such as thrombocytopenia, leucopenia, elevated liver enzymes, increased in bleeding time, a detailed anamnesis and physical examination were performed for CCHF suspicion were sent to Refik Saydam H?fz?s?hha Central Research Laboratories for confirmation of the diagnosis.

Intensive care is needed for severe CCHF patients. Airway, breathing, and circulation should be controlled in CCHF patients. Calorie support should be given and blood products should be given when needed. CCHF patients should be closely monitored and if needed they should be supported by mechanical ventilation and dialysis in ICU [7,16,17]. There is no specific treatment but an antiviral agent ribavirin can be used orally or parenterally [7,14,17]. However, it is only currently the oral form available in our country. Although it is claimed that ribavirin decreases mortality especially in severe cases of CCHF, it has been reported that ribavirin increased mortality instead of decrease in mortality [3,9,7,18,19]. We initiated supportive treatment to confirm cases. Eighteen cases, not responding to supportive treatment and probably requiring intensive care, were referred to another health center with advanced facilities. Eleven patients of them needed to be admitted into intensive care unit. Ribavirin was administered to them along with supportive treatment. Based on WHO guidelines, patients should be treated for 10 days (30 mg/kg as an initial loading dose, then 15 mg/kg every 6 hours for 4 days, and then 7.5 mg/kg every 8 hours for 6 days) [14,20]. Ribavirin was given to patients with vomiting or unable to tolerate oral intake by way of nasogastric tube. It was reported that hemolytic anemia, hypocalcaemia, and hypomagnesaemia might be seen in patients receiving ribavirin to treat severe acute respiratory syndrome [21,22]. However, no adverse events due to ribavirin therapy were noted among the CCHF patients healed in Turkey [14].

In conclusion, we emphasize that the differential diagnosis should also include viral diseases for non-specific symptoms such as dizziness, fatigue, bleeding, fever, and headache and abnormal laboratory findings such as thrombocytopenia, leucopenia and elevated liver enzymes. CCHF should be kept in mind among the viral diseases. A detailed anamnesis and physical examination should be performed in all cases. Clinically suspicious cases should be hospitalized, observed and after differential diagnosis early treatment should be initiated as soon as the diagnosis is confirmed.