Autophagy plays important roles in physiologic cellular events and also in cancers. It has been reported that cells escaped from death via autophagy and if autophagy inhibited, cells conducted to apoptosis. In some studies, protective effects of the melatonin on induced autophagy in cancer cells reported. In this study, we aimed to evaluate the autophagic effect of melatonin in cancer stem cells. For this purpose, CD44+/CD24- phenotype cells sorted from melatonin-treated and untreated MCF-7 and HEK293 cells. Effect of melatonin on autophagy was analysed by immunofluorescence and western blot analysis. Results showed that melatonin-induced LC3 (Microtubule-associated protein 1A/1B-light chain 3) aggregation and formation of autophagic vacuoles in MCF-7 derived cancer stem cells and also induced LC3-I to LC3-II conversion in these stem cells when compared to untreated control group. In conclusion, melatonin showed a pro-autophagic effect in CD44+/CD24- stem cells derived from MCF-7 cells and anti-autophagic effect in CD44+/CD24- stem cells obtained from HEK293 cells.

Cancer continues to be one of the major health problems as the most common cause of death after cardiovascular diseases. Lung cancer comes first in the incidence of death followed by stomach, liver, colorectal and breast cancers [1]. In the last 30 years, effective treatment methods are tried to be against cancer in addition to studies trying to understand formation and development mechanisms of cancer.

Cancer studies conducted have shown that cancer is created by a group of cells with stem cell properties [2,3]. It has been determined that these cells named Cancer Stem Cells (CSCs) and found in the total tumor mass have an intrinsic or acquired resistance to cytotoxic agents and radiation. The mechanisms underlying this resistance are reported as an increase in DNA damage recognition and repair capabilities, lack of activity in the apoptotic pathway, lack of chemotherapeutic agents into cells or increase in the excretion of these agents out of the cell [4,5]. However, in some tissues, cancer stem cells are observed to be in silent mode by slowing down the cell cycles and exhibiting a dormant character [6,7].

Since cancer stem cells show resistance to conventional chemotherapeutic methods and they become dormant, alternative compounds that do not harm normal cells are being investigated. In a study that we have conducted, we have observed that melatonin, which is a natural compound, induces apoptosis and cell differentiation in cancer stem cells. In studies conducted by other groups, it was reported that melatonin protected cancer cells from induced autophagy [8]. In a study conducted by Koh, melatonin has been shown to prevent ischemic brain damage with activation of the mTOR signaling pathway [9]. The mTOR protein is known to have a central regulatory role in the cell growth and cell cycle progression, and the mTOR pathway is thought to have an inhibitory effect on the autophagy [9].

In many studies investigated the relationship between cancer and autophagy, it was observed that there was an increase in the autophagy in tumor cells with no growth factors, cells escaped death with autophagy, cells died by apoptosis when autophagy in cells was inhibited [10,11]. In this study, we tried to understand whether melatonin can be used in the elimination of cancer stem cells and cancer treatment as an alternative treatment method by presenting the effect of melatonin, which induces autophagy in normal cancer cells, on cancer stem cells.

Cell viability analysis carried out by MTT (Thiazolyl Blue Tetrazolium Bromide) assay. For this purpose, approximately 104 cells added into 100 μl culture medium and incubated in 96 well-plate at 37°C in 5% CO2. Cells washed twice with PBS after the removing the culture medium from the plate and incubated for 24 h in serum-free medium for synchronizing the mitotic cycle of each cell in wells. After the synchronizing procedure, cells treated with 100 μl of the medium that contains various concentrations of melatonin for 24, 48 and 72 h. Then, 10 μl 12 mM Thiazolyl Blue Tetrazolium Bromide (MTT; Sigma Aldrich®M2128) solution added to each well and incubated for 4 h. Absorbance were measured at 490 nm wavelength in the microplate reader (Biotek, USA).

Stem cell isolation was carried out by using CD44/CD24 surface markers. CD44+/CD24- stem cells isolated by flow cytometry from the cells that treated with melatonin and C2Cer. Counted cells transferred to FACS test tubes as desired amounts. Cells in the FACS tubes centrifuged in 250 Xg for 5 minutes and then pellets suspended in 100 μl %2 FBS/HBSS. Twenty microliters of each conjugated antibodies (CD44-APC, Sigma-Aldrich Corporation, Germany; CD24-FITC, Sigma- Aldrich Corporation, Germany) were added to test tubes in the dark for 1 × 106 cells. Cells remained in the dark and rinsed for every 10 minutes for an hour at 4°C. Unconjugated antibodies washed with 3 ml 2% FBS/HBSS. Cell pellets diluted with 400 μl DAPI (0.4 ng/ml) (Sigma-Aldrich Corporation, Germany) and separated by FACS machine (FACS AriaIII-BD Pharmingen, ABD).

After the CD44+/CD24- phenotype cells sorted from MCF-7 and HEK293, cells seeded to the media that not contain serum (1% PC+RPMI-1640) and transferred to 5% CO2, 37°C incubator. Cells cultured 45-60 days for tumor phase formation. At the end, tumor phase formations analysed and monitored.

Immunofluorescence and western blot analysis performed to analyse the autophagic effect of melatonin on cancer stem cells. LC3-II aggregation determined by immunofluorescence analysis and LC3-I and II proteins analysed by western blot. MCF-7 and HEK293 cells treated for 48 h with 35 μM melatonin and 25 μM C2Cer which is autophagy marker. Then, CD44+/CD24- stem cells isolated and treated with labeled antibodies. Autophagy vacuoles analysed under the fluorescence microscopy.

Total protein extraction performed by a commercial kit (Millipore, cat. no: 2910) according to the manufacturer instructions. Protein samples were incubated at 95°C for 5 minutes after the addition of the same volume of 4X lammeli buffer. An amount of 20 μg of total protein was loaded onto each well of the 4-12% gradient gel and run at 40 mA electric current for 45 min. After the electrophoresis, proteins transferred onto PVDF membrane by using Trans- BlotRTurboTM Transfer system (Bio-Rad Laboratories, Inc., #170-4155) in 1.3 A electrical current. The immune blotting was accomplished by the incubation of the membrane with 1 μg/ml of primary antibody solution overnight and then 0.1 μg/ml of secondary antibody for 2 h at room temperature. At the end of the blotting, the membrane was incubated in Immune-star Western Chemiluminescent (Bio-Rad Laboratories, Berkeley, USA) substrate solution for 10 min and then exposed to X-ray film (Fujifilm, Tokyo, Japan) for one minute and imaged by using an X-ray film processor (Ecomax, Germany).

The MTT assay used to assess the cell viability. The dosage of the melatonin determined consistent with the literature, 100 μM and diluted concentrations were used (Figure 1). Results showed cells were stable over the 100 μM, so diluted dosages of melatonin (10, 20, 40, 80 μM) were used. 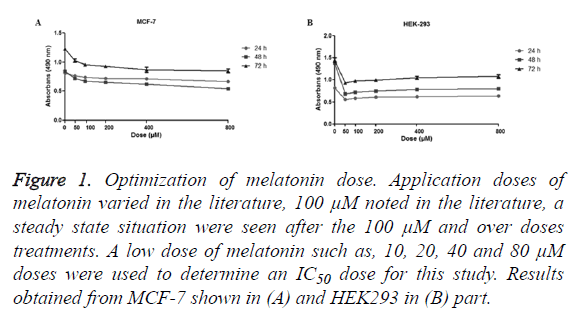 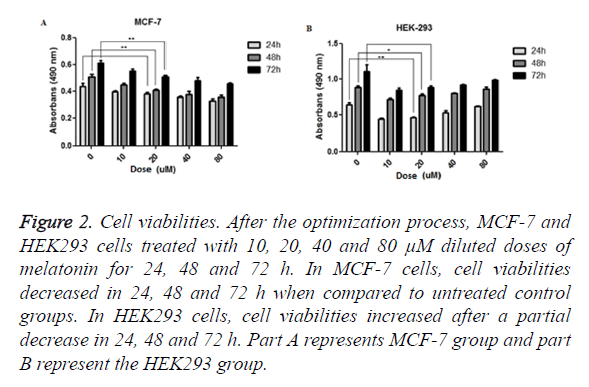 Annexin V analysis performed to determine whether the decrease in MCF-7 cell is related to apoptosis or not. To confirm the decrease in 10 and 20 μM, 5 and 35 μM dosages added to the study and MCF-7 and HEK293 cells treated for 48 h. Results showed 5 μM (p=0,0040) and 35 μM (p=0,0060) increased the apoptosis in MCF-7 cells. Likewise, increased apoptosis rate observed in HEK293 cells when compared to control group in 5 μM (p=0.0025) but, in 35 μM (p=0.0324) treated group, apoptosis was decreased (Figure 3). Efficient outcomes were taken in 35 μM concentration for both cell types and further studies done with this dosage. 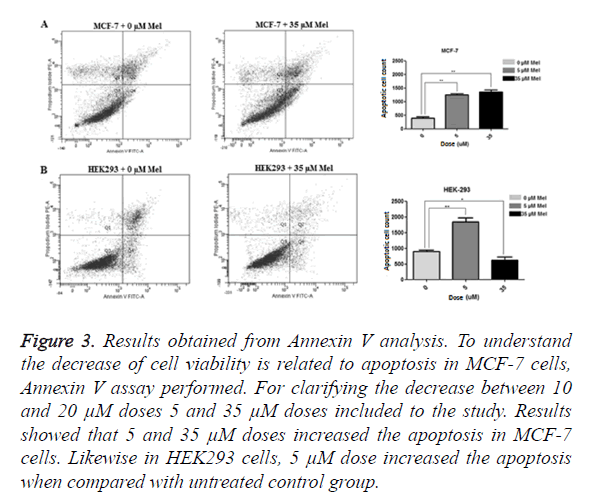 Figure 3. Results obtained from Annexin V analysis. To understand the decrease of cell viability is related to apoptosis in MCF-7 cells, Annexin V assay performed. For clarifying the decrease between 10 and 20 μM doses 5 and 35 μM doses included to the study. Results showed that 5 and 35 μM doses increased the apoptosis in MCF-7 cells. Likewise in HEK293 cells, 5 μM dose increased the apoptosis when compared with untreated control group.

Determining the number of stem cells and sphere formation

The amount of CSCs determined against to the CD44/CD24 surface marker in flow cytometry. Also, the existence of stem cells verified by tumor phase (sphere) formation technique. In MCF-7 cell line CD44+/CD24- combination was 1, 2% and in HEK293 was 1, 1% found. 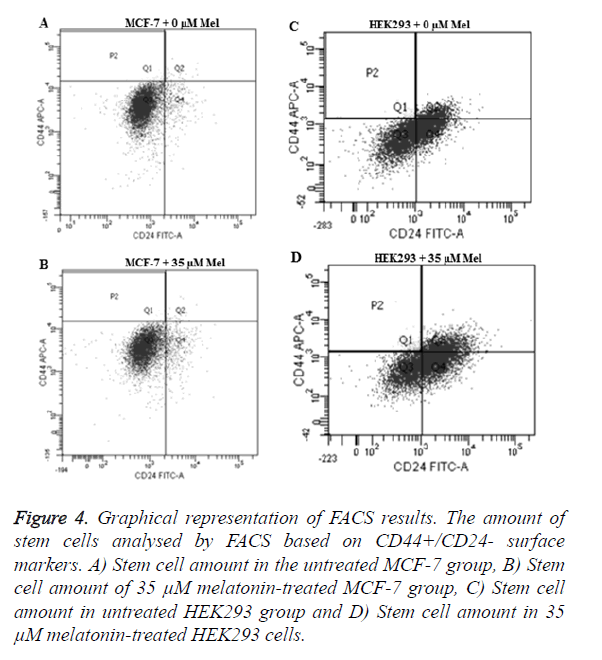 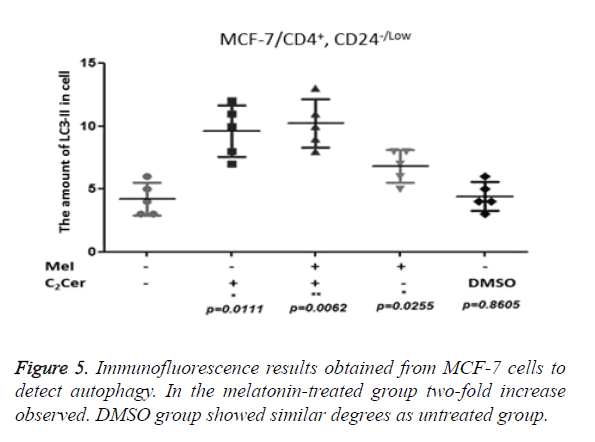 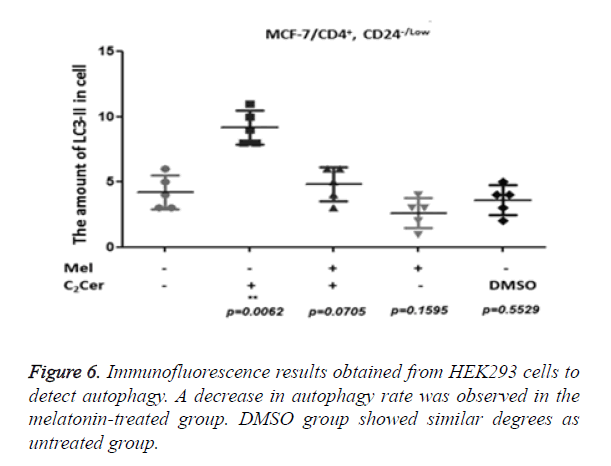 Western blot results showed an increase in conversion of LC3-I to LC3-II in melatonin-treated CD44+/CD24- stem cells derived from MCF-7 cells when compared to untreated group (p=0,0086). The most determined formation was the LC3-II formation in the combined treatment of C2Cer and melatonin (p=0.0002). In DMSO group, like immunofluorescence results, similar band densities observed in DMSO-exposed and untreated control group (p=0.1264). When results considered altogether, melatonin showed an autophagic effect on the CD44+/CD24- cancer stem cells that derived from MCF-7 cells (Figure 7). 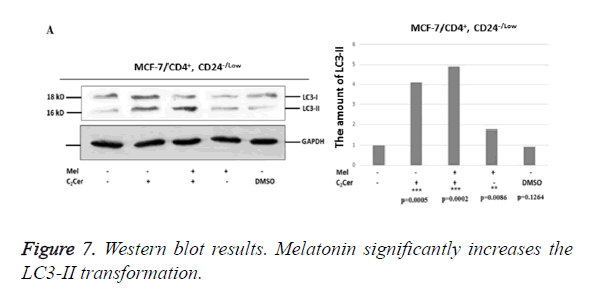 In HEK293 cells, conversion of LC3-I to LC3-II seen decreased by half when melatonin-treated and untreated groups compared (p=0.0089). In C2Cer and melatonin combined group, LC3-II formation was similar to the untreated control group (p=0.1370) and this decrease was considered is a result of melatonin. DMSO group showed similar band density to the untreated control group. Results obtained from HEK293 cells demonstrate more efficiently that melatonin prevents autophagy in CD44+/CD24- stem cells.

The synthesis of melatonin from the pineal gland exhibit a circadian rhythm. It is blood level is highest at night and decrease in daytime. This circadian feature is seen in almost all animals in a similar way regardless of time of daily activity [12]. It is reported that decreased function of the pineal leads to hyperestrogenism by reducing the secretion of melatonin and this may lead to breast cancer [12]. Melatonin is reported to have an oncostatic and antiproliferative effect on breast cancer development [13]. The positive effect of melatonin on the reduction of proliferation of cancer cells was shown by several studies [14]. However, its effect on stem cells is still unknown. In this study, the autophagic effect of melatonin on stem cells with CD44+/CD24- obtained from a breast cancer cell line MCF-7 was investigated. The same study was conducted on embryonic kidney cell line HEK293 cells in order to understand its effect on non-cancerous stem cells.

In the studies conducted on MCF-7 human breast cancer cells, it has been shown that the transition of the cell cycle from G0- G1 phase to S phase is blocked at physiological melatonin concentrations and this inhibits cell proliferation induced by estradiol [15]. In the literature, the doses administered are observed to be varying. Therefore, in our study, the viability analysis was performed in order to determine the common IC50 dose required for MCF-7 and HEK293 cells. As a result of analysis of viability, when groups with and without melatonin in MCF-7 cells were compared, a significant decrease was observed in viability as a function of time in the melatonintreated group. On the other hand, in HEK293 cells, there was an increase in viability depending on time in the melatonintreated group. These results are consistent with findings of Cos et al. [15]. In this study, a different dose of melatonin compared to doses used in the literature was shown to be appropriate to our study. In the vitality analysis, IC50 dose of melatonin forMCF-7 and HEK293 cells was found to be 35 μM and implementation period was set at 48 h.