Inter-rater variability and validity of the Clinical Assessment of Nutrition Score (CANS) in term newborns.

Aim: To assess the inter-observer reliability and validity of the CANScore (Clinical Assessment of Nutrition Score) compared to other anthropometric parameters namely, Ponderall Index, MAC:HC and BMI. Materials and Methods: Nighty eight term newborns with no medical complications were included. Ponderall Index, MAC:HC (Midarm Circumference to Head Circumference ratio) and BMI (Body Mass Index) were assessed. Two observers applied the CANScore individually on every neonate. At the end of the study, the scores of both the raters were entered in a datasheet and compared statistically. Results: Prevalence of Fetal malnutrition (FM) based on CANSore was ~59% in the study group. Inter-rater reliability of the CANScore was found to be fair to good but not excellent. CANScore had a good sensitivity and specificity compared with BMI (86.2 % and 75% respectively, AUC: 0.853). Conclusion: Inter- observer variability of CANScore is fair to good but not excellent. It has the highest sensitivity and specificity when compared with the BMI. CANScore alone may not accurately assess the fetal malnutrition.

The term Fetal Malnutrition (FM) was introduced by Scott and Usher in 1966 to identify malnutrition in the newborn. Many fetal anthropometric indices exist, notably weight for gestational age, Rohrer’s Ponderall Index, Midarm Circumference to Head Circumference ratio (MAC:HC) and neonatal BMI (Body Mass Index). These generally assess Intrauterine Growth Restriction (IUGR) but not fetal nutrition, which specifically refers to muscle mass and adiposity. The Clinical Assessment of Nutrition Score (CANS), developed by Metcoff in 1994 is the most widely used score for assessment of malnutrition in the newborn.

However, being an entirely visual score, there seems to be a wide scope for subjectivity in the assessment.

We conducted the present study primarily to assess the inter-rater reliability of this score and also its validity when compared with other indices like the Ponderall Index (PI), Body Mass Index (BMI) and Mid Arm Circumference to Head Circumference ratio (MAC:HC).

To assess the inter-rater reliability of CANScore and its validity compared with other anthropometric indices of newborn namely PI, BMI and MAC:HC.

This was an observational study conducted at ESIC MC & PGIMSR, Chennai from January 2016-June 2016. CANScore is done as part of the routine assessment of all term newborns. The two raters involved were qualified paediatricians practicing in Paediatrics and Neonatology for the last 10 years. For a 70% probability of agreement between the raters (2 raters) and with an error margin of 20% the sample size calculated was 70 newborns.

A total of 98 neonates born in the hospital were included. Only term newborns (>37 weeks gestational age, by dates and modified Ballard’s score) aged less than 72 hours, with no medical complications or congenital anomalies were included.

The two raters individually did a CANScore on each of the included newborn. The score (Tables 1-3) consists of a total of nine physical parameters-hair, shape of the face, neck fat, subcutaneous fat of the upper limb, the back, buttock, lower limbs, the chest and abdomen.

Table 1: Prevalence of malnutrition in the study population based on each anthropometric parameter (n=98)

Table 3: The nine signs for Clinical Assessment of Nutritional status in the newborn

Each of these is graded, the lowest grade for each being 1 and the highest 4. Hence, the maximal and minimal scores possible are 36 and 9 respectively.

Both raters recorded the scores separately. They did not discuss these scores throughout the study period.

A PI of <2.2 and MAC:HC<0.27 were considered to be indicative of malnutrition. Small, appropriate and Large for Gestational age (SGA, AGA and LGA, respectively) were defined based on intrauterine growth percentile charts.

At the end of the study, the scores from the two raters were entered in the excel sheet. Kappa statistics and Bland Altmann analysis were used for assessing the inter-rater reliability. The results were analysed using SPSS version 21.

The Kappa statistics for the inter-rater reliability was 0.682, indicating a fair to good agreement between the raters.

The raters had fair to good agreement in assessment of the following parameters- hair, face and chest, as evidenced by the Kappa statistic values (0.462 to 0.659).

For the remaining parameters namely neck, arm, back, buttock, leg and abdomen the agreement between the raters was poor with kappa <0.4.

This Bland Altmann Plot shows that the mean difference between the score given by the two raters is -0.296. The Limits of Agreement are -2.295 to +1.704 (Figure 1). Plot shows a substantial portion of the readings within the limits of agreement, indicating a fairly good agreement between the two raters. 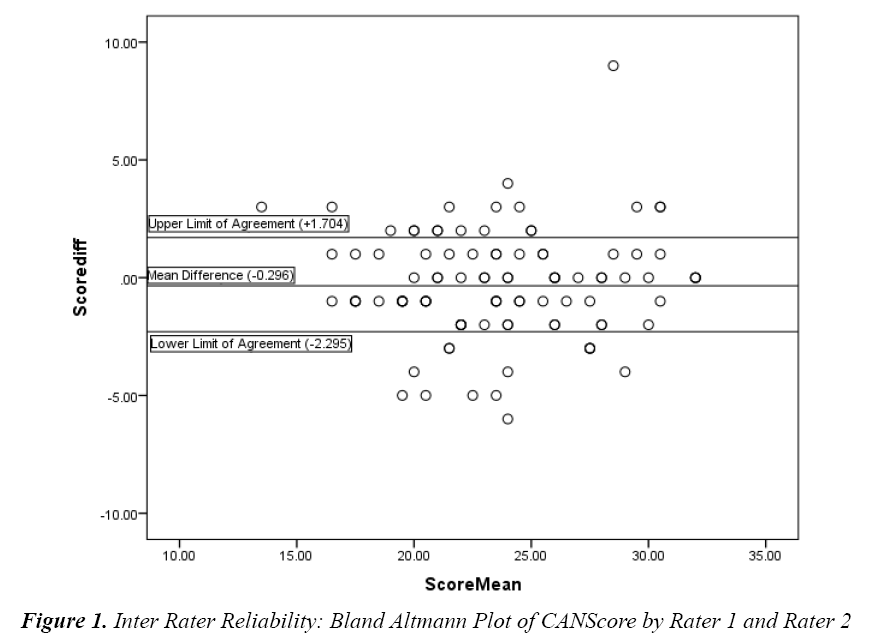 Scott and Usher introduced the term Fetal Malnutrition (FM), in the 1960s to identify newborns with sub-optimal nutritional status as regards adiposity and muscle mass [1].

Metcoff introduced the Clinical Assessment of Nutrition Score based on nine readily detectable signs. In one of the most important studies, Metcoff et al. demonstrated that Fetal Malnutrition and SGA are not synonymous as ~5.5% of AGA newborns in his study had FM defined by the CANScore ≤ 24 [2].

The inter-rater reliability was however not excellent. This probably can be attributed to the fact that the CANScore is an entirely visual score with a wide scope for subjective differences. This, to some extent undermines its validity. Our study is limited by the small sample size and hence there is a need for more studies with larger sample sizes to ascertain the inter-rater reliability of the CANScore.

To the best of our knowledge, this is the only study assessing the inter-rater reliability of the CANScore. Mehta et al. in their study have mentioned that the inter- rater reliability was excellent but this has not been quantified [3,4].

More studies, particularly prospective ones, involving all the above scores and indices are needed to better evaluate fetal malnutrition. A recent study on nutritional assessment scores in pancreatic surgery found that none of the scores predicted postoperative complications though pre-operative nutritional status is known to have an impact on the clinical outcome [9,10]. Similarly, to assess fetal malnutrition too, long term follow up studies involving all the available anthropometric indices and nutritional scores are essential. Such studies only can help identify the most sensitive and specific index and its cut- off that is associated with the highest risk of the complications of fetal malnutrition.

The inter-observer reliability of CANScore is fair to good but not excellent. It has the best sensitivity and specificity when compared with the BMI, than with other anthropometric indices like MAC:HC or PI. Using CANscore alone to make a diagnosis of Fetal malnutrition may lead to error. Combining CANScore along with BMI may help in more accurate assessment of fetal malnutrition but more studies are required to confirm the same.