In this study, the unconfined compression experiments of the intervertebral disc were conducted by applying an optimized digital image correlation (DIC) technique, and the internal strain distribution was analyzed for the disc. It was found that the anulus fibrosus (AF) radial displacement was outward in all the six test regions: inner AF, middle AF and outer AF both in anterior and posterior region. Middle AF exhibited the highest radial strains both in posterior AF and anterior AF with the increase of loads. It was noted that all samples demonstrated a nonlinear axial stress-axial strain profile in the process of deforming, and demonstrated an elastic region once the sample was deformed beyond its toe region. Inner AF exhibited the highest axial strains, while outer AF exhibited the lowest axial strains during static compressive loading. This study provides important new data in understanding the internal strain distribution, and provides a technique and baseline data for evaluating surgical treatments.

Lumber disc herniation, which is the complete rupture of the annulus fibrosus along with extrusion of the nucleus pulposus, is commonly associated with back pain [1]. The mechanical state in the intervertebral disc is highly associated with the development of lumber disc herniation, and several motion segment studies have quantified external disc displacement and internal pressure [2]. However, limited success has been achieved when attempting to quantify mechanical behaviors within the disc. Therefore, there remains a critical need for quantitative measures of internal mechanical behavior of the disc under physiologic loading. 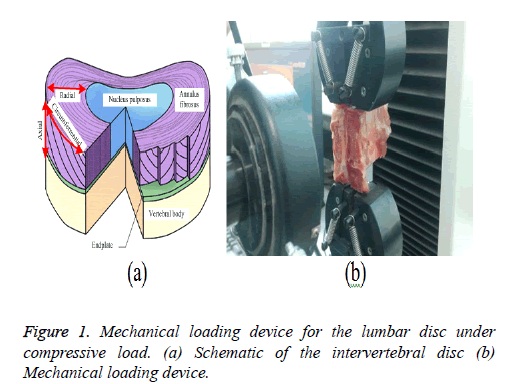 Experimental studies have attempted to measure deformations of the intervertebral disc using radiographic or optical imaging methods [11,12]. Research indicated that time, degeneration, posture, muscle tone and loading would influence the mechanical state of the intervertebral disc [13-15]. Several studies have experimentally measured the internal disc deformations, and previous studies visualized internal deformations of the disc by placing metal beads in the intact disc using needles and tracking the beads on radiographs [16,17]. Heuer et al. investigate the annular fiber surface strains and disc bulging by a three-dimensional laser scanning device, then disc bulging and tissue surface strains in anuluscollagen fiber directions were computed [18,19]. O'Connell et al. measured the internal deformations and strains of human intervertebral discs using MRI, and then qualitatively calculated the outer and inner AF radial displacement (bulge) as the average of the anterior AF and posterior AF nodal displacement at the outer and inner AF site [20,21]. Liu et al. examined the compressive and tensile responses of the intervertebral disc by applying the optimized digital image correlation technique, and calculated the internal axial strains in the disc [22].

To date, no study has quantitatively calculated the radial deformations within the disc without interruption of the structure to place markers or visualize the surfaces. The purpose of the present study is to analyse the axial and radial strains of annulus fibrosus in the intervertebral disc under compressive load. By applying the optimized digital image correlation (DIC) technique, the internal strains from six unique locations of the porcine intervertebral disk have been examined: inner AF, middle AF and outer AF both in anterior and posterior region. Simultaneously the internal strain distribution of the intervertebral disc has also been analysed.

Ten fresh porcine lumbar spine sections were obtained from 8- month-old pigs, and the L2-L3 motion segments were isolated and cut along the sagittal plane. Twenty intervertebral disc samples with vertebra were made in dimension of 30 mm in diameter and 3.5 mm in height. Previous study has confirmed geometric, anatomical, and functional similarities between porcine and human lumbar spines [23].

A MTF-100 testing machine (Center of Mechanical Experiment in Shanghai University, China) was used to perform the compression test. The testing machine is composed of image acquisition system, mechanical loading system, computer control system and image processing software. The intervertebral disc samples were fixed in the center of the loading system by bone screws perpendicular to the disc surface, as shown in Figure 1b.

An optimized digital image correlation technique was applied to measure the two-dimensional deformation fields in the lumbar disc under unconfined compressive load. The basic principle of the optimized DIC is to automatically determine the strain field by matching the random variation of the sampling points. In this study, the metallic nano-particles were used as the marked points to reflect the deformation in different regions of the sample, and they were coated uniformly on the sample surface.

The sagittal plane of the annulus fibrous in the process of axial compression was clearly observed in the MR images (Figure 2). Figure 2c shows local region with evenly distributed nano-particles in the sagittal plane of the intervertebral disc before and after loading. A pair of marked points are chosen in this region, then the axial as well as radial strain will be determined by comparing the coordinate values between this pair of points before and after loading, using: 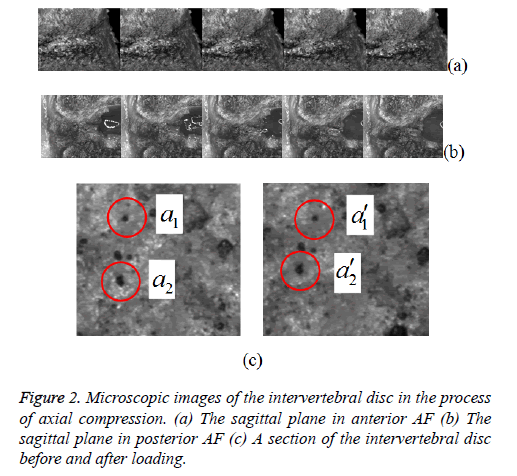 Considering random error, the samples were applied continuous compressive load with the deformation rate of 1 mm/min until the strain values reached 30%. The CCD camera was focused on the sagittal plane of the samples during the whole process of loading. In addition, the loads were measured by the testing machine and were real-time displayed in the microcomputer.

A one-way analysis of variance (ANOVA) was performed to determine the statistical variances among the strain values in the compression tests. Statistical significance was considered to be significant with a P-value of <0.05. Data points used in the figures of the next section represented mean values, while the standard errors above and below mean values were indicated by error bars.

The strain analysis during static loading was performed in the intervertebral disc as shown in Figure 3. Radial displacement at the mid-disc height was examined for both the anterior AF and posterior AF to determine the magnitude and direction of AF bulging. 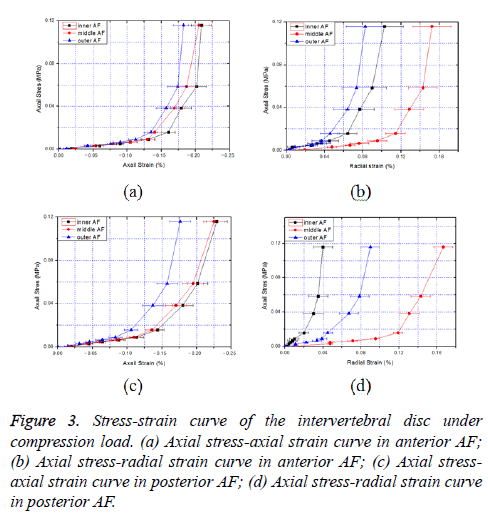 The purpose of this study was to investigate the internal strains in porcine lumbar motion segments under axial compressive load by the optimized DIC technique.

The first finding was that the anulus fibrosus radial displacement was outward in all the six test regions: inner AF, middle AF and outer AF both in anterior and posterior region, as shown in Figures 3b and 3d. The observed outward bulge of the AF was as expected based on the compression of a thick walled vessel that has been predicted in models [24]. Besides, middle AF exhibited the highest radial strains both in posterior AF and anterior AF as shown in Figures 3b and 3d. This may be due to NP shifting under applied load, the middle AF outward displacement was larger than the inner AF displacement [20,21]. Tensile radial strains are produced when the middle AF boundary deforms outward more than the inner AF, and these peak tensile strains may contribute to radial tears and herniations [25,26].

The second finding was that inner AF exhibited the highest axial strains, while outer AF exhibited the lowest axial strains during static compressive loading as shown in Figures 3a and 3c. It was in good agreement with Liu et al. [22], who found that inner AF and posterior AF experienced higher axial strains than outer AF and anterior AF. Besides, all samples demonstrated a nonlinear axial stress-axial strain profile in the process of deforming, and demonstrated an elastic region once the sample was deformed beyond its toe region as shown in Figures 3a and 3c. This result is in good agreement with early research by Causa et al. [27], who obtained the stress-strain curves by generalized compression tests.

Besides, the present study was conducted under unconfined compression. As we were not able to account for deformations in the disc that are not perpendicular to the plane of the imaging, there will be errors in the strain calculations.