Background: Accumulating evidence has indicated that Low-Magnitude High-Frequency Vibration (LMHFV) can promote fracture healing, and thus, holds promise as a treatment for osteoporosis. However, few studies have reported the effects of LMHFV, especially intermittent LMHFV (iLMHFV) on osteoblasts in vitro. In this study, we examined the effects of sostenuto and intermittent LMHFV (sLMHFV and iLMHFV, respectively) on MC3T3-E1 preosteoblast proliferation and production of osteogenic and osteoclastogenic proteins.

Methods: The cell proliferation was determined using MTT assay for up to 7 d. The expression levels of the osteogenic proteins Alkaline Phosphatase (ALP), Osteocalcin (OCN), and Collagen type I (COL I), and the osteoclastogenic protein nuclear factor-κB ligand (RANKL) and its inhibitor Osteoprotegerin (OPG) were determined by Real time PCR and/or Western blot analysis. The ALP activity was determined using a fluorometric assay. The secretion of osteoclastogenic cytokines RANKL and M-CSF was assessed by ELISA.

Results: Our results showed that neither sLMHFV nor iLMHFV affected MC3T3-E1 cell proliferation. However, both sLMHFV and iLMHFV increased the expression of the osteogenic proteins ALP, OCN, and COL I. SLMHFV and iLMHFV also inhibited the secretion of the osteoclastogenic cytokines RANKL and M-CSF and decreased the OPG/RANKL ratio. These osteogenic and anti-osteoclastogenic effects were most profound with short iLMHFV.

Conclusion: These finding could eventually contribute to the development of potential treatment regimen for osteoporosis using LMHFV.

Bone fracture is the most common injury in traffic accidents and falls, especially in elderly patients with osteoporosis [1,2]. 5%-10% of all patients with bone fracture often suffer from delayed unions or non-unions, which may result in long-term disability [3]. There are about 8.9 million of osteoporosis-related fractures each year globally, which brings a great burden to public health [2].

Bone homeostasis is an intricate balance between bone formation by osteoblasts and bone resorption by osteoclasts. During the process of fracture healing, osteoblasts must proliferate, differentiate, and induce mineralization within bone extracellular matrix. Osteoblast differentiation plays a vital role during bone fracture healing. This process is characterized by increased expression of osteogenic proteins such as Alkaline Phosphatase (ALP), Osteocalcin (OCN), and Collagen type I (COL I). Mechanical forces can affect bone formation and repair through regulation of osteoblast differentiation and the intricate interplay between osteoblasts and osteoclasts [4-6]. Osteoblasts regulate osteoclast differentiation by producing osteoclastogenic cytokines including Macrophage Colony- Stimulating Factor (M-CSF) and nuclear factor-κB ligand (RANKL). Mechanical forces can also inhibit the production of these osteoblast-derived osteoclastogenic cytokines, thereby slowing down the process of bone resorption [5,7-9].

Sostenuto Low-Magnitude High-Frequency Vibration (sLMHFV) in the range of 0.2-0.3 g and 32-37 Hz increases bone density and prevent bone from developing osteoporosis [10-13]. It also promotes closed femoral fracture healing [14]. In agreement with these in vivo effects, sLMHFV (0.3 g, 40 Hz, 30 min/12 h) increases osteoblast differentiation, matrix synthesis, and mineralization in vitro [15,16]. Interestingly, studies have also shown that intermittent LMHFV (iLMHFV) is more effective than sLMHFV in improving the biomechanical properties and microstructure of bone tissue in ovariectomized rats [17]. However, there are few reports on the effects of iLMHFV on osteoblasts in vitro.

The mouse preosteoblast MC3T3-E1 cell line was obtained from the Cell Resource Center IBMS CAMS/PUMS (Beijing, China). The cells were cultured in modified Eagles minimum essential medium (α-MEM; Invitrogen, USA) supplemented with 10% Fetal Bovine Serum (FBS) and 1% penicillin-streptomycin. The cells were maintained at 37°C, 5% CO2 in a humidified incubator. After having reached around 90% confluence, the cells were harvested by treatment with 10% trypsin-EDTA (Sigma), seeded in six-well plates, and cultured for another 24 h prior to vibration treatment.

The effects of iLMHFV and sLMHFV treatment on MC3T3-E1 cell proliferation were determined using the Methyl Thiazolyltetrazolium (MTT) assay. Briefly, MC3T3-E1 cells were cultured for another 24 h after vibration treatment. MTT (Promega) solution (5 mg/ml, 1 ml/well) was added, and the cells were incubated for 4 h. After that, the supernatant was removed, and 2 ml Dimethyl Sulfoxide (DMSO) was added to dissolve the formazan crystals formed. Absorbance at 490 nm was recorded by a scanning multiwell spectrophotometer (iMark, Bio-Rad, US). Each experiment was performed in triplicate. 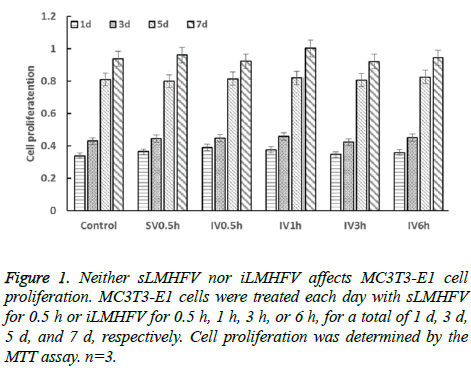 Alkaline Phosphatase (ALP), a key enzyme that provides high concentrations of phosphate at the site of mineral deposition, is a key factor of osteoblast early differentiation [20]. We examined the effects of sLMHFV and iLMHFV on ALP mRNA expression level and enzymatic activity in MC3T3-E1 cells. The cells were treated with sostenuto vibration for 0.5 h or intermittent vibration for 0.5 h, 1 h, 3 h, or 6 h. The ALP mRNA levels and enzymatic activity were determined by real time PCR and a fluorometric ALP assay, respectively. As shown in Figure 2A, both sLMHFV and iLMHFV-treated cells displayed significantly higher ALP mRNA levels compared to untreated cells. Interestingly, 0.5 h or 1 h intermittent vibration was significantly more effective in increasing ALP expression than 0.5 h constant vibration with 0.5 h group 110% more and 1h group 20% more, respectively. Moreover, 0.5 h intermittent vibration appeared to be optimal, with longer vibration being less effective. Consistent with the mRNA expression results, the ALP enzymatic activity was significantly enhanced by both sLMHFV and iLMHFV treatment, with iLMHFV demonstrating more robust effects (Figure 2B). 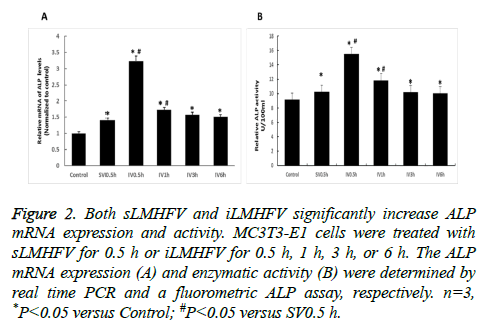 We subsequently examined the effects of sLMHFV and iLMHFV on the mRNA and protein expression level of the osteogenic proteins OCN and COLI, the key markers of osteoblast differentiation at later stage. OCN, a protein secreted solely by osteoblasts, is present in bone mineralization and calcium ion homeostasis. COLI is the main component of bone ECM (Extra Cellular Matrix). MC3T3-E1 cells were treated with sostenuto vibration for 0.5 h or intermittent vibration for 0.5 h, 1 h, 3 h, or 6 h. The OCN and COL I mRNA and protein levels were determined by real time PCR and Western blot analysis, respectively. As shown in Figures 3A and 4A, the mRNA levels of OCN and COLI in MC3T3-E1 cells significantly increased after sLMHFV or iLMHFV treatment. Moreover, intermittent vibration (OCN: 0.5 h, 1 h, or 3 h, COL I: 0.5 h) was superior to constant vibration (0.5 h) in inducing these osteogenic proteins. Consistent with these mRNA results, sLMHFV and iLMHFV treatment significantly elevated OCN and COL I protein levels in MC3T3-E1 cells, with iLMHFV demonstrating more robust effects (Figures 3B and 3C and 4B and 4C). Similar to what was observed with ALP, the optimal effect on OCN and COL I was obtained with 0.5 h intermittent vibration. 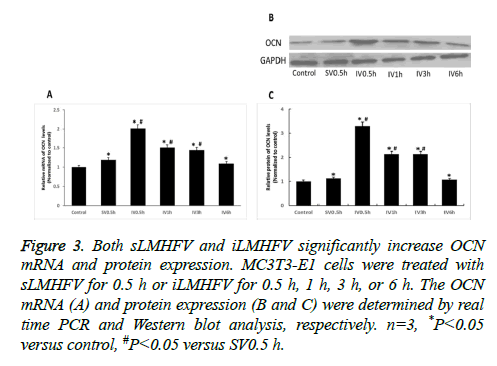 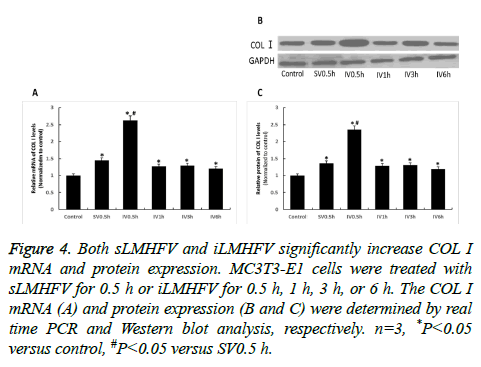 Osteoblasts regulate osteoclast differentiation through production of M-CSF, RANKL, and OPG. OPG is a decoy receptor for RANKL, which binds to RANKL blocks the RANKL-RANK interaction between osteoblast and osteoclast precursors, thereby inhibiting osteoclastogenesis. The ratio of OPG/RANKL determines osteoclast differentiation and consequently the bone resorption rate [14]. We examined the effects of sLMHFV and iLMHFV on the OPG/RANKL ratio in MC3T3-E1 cells. The cells were treated with sostenuto vibration for 0.5 h or intermittent vibration for 0.5 h, 1 h, 3 h, or 6 h. The OPG and RANKL mRNA levels were determined by real time PCR and the OPG/RANKL ratios were subsequently calculated. As shown in Figure 5, sLMHFV and iLMHFV treatment significantly increased the OPG/RANKL ratio in MC3T3-E1 cells, suggesting that these treatments inhibit the osteoclastogenic potential of osteoblasts. Similar to what was observed with osteogenic protein expression, iLMHFV (0.5 h, 1 h, or 3 h) treatment outperformed sLMHFV (0.5 h) in increasing the OPG/RANKL ratio, with 0.5 h, 1 h, and 3 h has 124%, 105%, and 96% higher than sLMHFV (0.5 h), and the optimal effects were obtained with 0.5 h intermittent vibration. 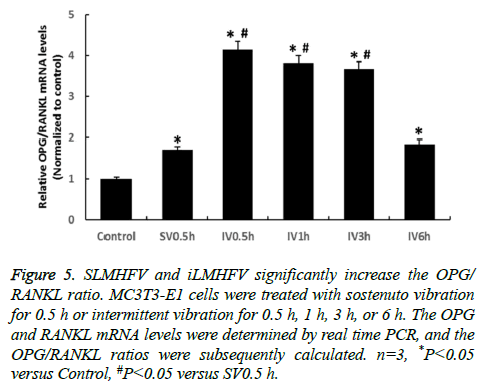 It has been reported that mechanical loading can suppress osteoclast activation through inhibition of the production of osteoblast-derived RANKL and M-CSF [5,7,8,14]. In this study, we examined the effects of sLMHFV and iLMHFV on M-CSF and RANKL secretion by MC3T3-E1 cells. The cells were treated with sostenuto vibration for 0.5 h or intermittent vibration for 0.5 h, 1 h, 3 h, or 6 h. The secreted RANKL and M-CSF protein in the culture medium were determined by ELISA. Our results revealed that both sLMHFV and iLMHFV treatment led to significantly decreased M-CSF and RANKL concentrations in the culture medium (Table 2), suggesting that these treatments suppress osteoblast-mediated osteoclast activation. In addition, iLMHFV (0.5 h or 1 h) outperformed sLMHFV (0.5 h) in inhibiting M-CSF and RANKL secretion, and the optimal inhibitory effects on both cytokines were obtained with 0.5 h intermittent vibration.

Mechanical loading has been well recognized as one of the key regulators for the mechanical and biological structure and function of bone. Bone-related cells respond to a diverse range of mechanical stimulations such as tensile stress from stretching [19,21-26], shear stress from fluid flow [27], four-point bending [28], and hydrostatic pressure [29]. In recent years, accumulating evidence has demonstrated that LMHFV promotes bone formation in vivo [9,17]. However, the effects of LMHFV on bone cells in vitro have not been comprehensively investigated.

Many studies have shown that mechanical stimulation promotes osteogenic differentiation and expression of ALP, COL I and OCN, proteins required for bone matrix synthesis, both in vitro and in vivo [33-35]. Specifically, LMHFV has been shown to strengthen bones and promote fracture healing in vivo [10,12,14,15]. In addition, sLMHFV has been reported to promote osteogenic differentiation in vitro [16]. In this study, we found that both sLMHFV and iLMHFV significantly increased the expression of ALP, COL I, and OCN in MC3T3-E1 preosteoblasts, indicating that both sLMHFV and iLMHFV promote osteogenic differentiation in vitro. Intriguingly, we found that iLMHFV was more effective than sLMHFV in inducing osteoblast differentiation, suggesting that iLMHFV may have greater osteogenic effects. We speculate that osteoblasts could adapt to the stimulation, thus fail to respond as rigorous as it does at the beginning, and could not translate the mechanical stimulation to biological responses in the continuous manner. When osteoblasts are subject to an intermittent rest between stimulation, they can regain the ability and sensitivity to vibration stimulation, thus creating a biomechanical response far better than continuous stimulation.

Previous in vitro studies have shown that sLMHFV can inhibit osteoclastic differentiation and osteoclasticresorption by suppressing the production of osteocyte-derived osteoclastogenic cytokines [14,36]. In this study, we found that both sLMHFV and iLMHFV significantly decreased the level of M-CSF and RANKL secreted by MC3T3-E1 cells. sLMHFV and iLMHFV also significantly increased the OPG/RANKL ratio, a critical regulator of osteoclast formation, activation, and survival. Thus, our results suggested that both sLMHFV and iLMHFV have anti-resorption potential in bone remodeling and homeostasis. Intriguingly, iLMHFV has more profound effect than sLMHFV in inhibiting the production of osteoclastogenic cytokines, suggesting that iLMHFV may contribute more in protecting bone tissue from osteoclastic absorption.

Taken together, our results suggested that, compared with sLMHFV, iLMHFV has more profound effect in enhancing bone formation and healing. These in vitro results are on par with previous in vivo studies, which showed that iLMHFV loading was superior to sLMHFV loading in upregulation osteogenic proteins and promoting healing in osteoporotic fractures [17,37]. Sostenuto mechanical loading may cause adaptive tolerance to the stimuli, resulting in gradually diminishing effects [38]. We believe that periodical rest between LMHFV may help maintain or even restore the sensitivity to the stimulation of cells, and thus generating greater effect towards desired function. Moreover, we found that 0.5 h of iLMHFV can provide optimal results, with longer treatment being less effective. These results were in agreement with previous findings that early exposure to LMHFV can positively modulate osteoporotic bone and osteoblasts; however, the beneficial effects seem to not give a consistent performance over time [39]. We believe that this is because prolonged intermittent vibration could result in similar effect as sostenuto vibration, which may cause fatigue of cells to mechanical stimuli, leading to desensitization over time.

Our findings could provide useful insights in the development of clinically applicable LMHFV treatment regimen to strengthen bones and promote fracture healing. Clinical trials are required to investigate the therapeutic potential of LMHFV to treat osteoporosis in human in order to harness our findings to benefit more patients.

In conclusion, we have shown that both sLMHFV and iLMHFV can increase the expression level of the osteogenic proteins ALP, OCN, and COL I in MC3T3-E1 preosteoblasts. sLMHFV and iLMHFV also can inhibit the secretion of osteoclastogenic cytokines M-CSF and RANKL, as well as can increase the OPN/RANKL ratio. These osteogenic and anti-osteoclastogenic effects were most profound with short iLMHFV.