The application of the Radio Frequency (RF) devices that are commonly used in the area near or surrounding the human body is increasing. Therefore, it is required to assess the interaction between the human body and the Electromagnetic (EM) wave. It is believed that the human body is transparent to the EM waves emitted by the RF devices. The impact of the EM wave on the human body depends on its frequency. When the electromagnetic field is transmitted from the end to end of the human tissues, the energy associated with the electromagnetic wave is absorbed by the biological tissues [1]. The extended face-to-face consequence of the electromagnetic field is the heating of the human tissue. The biological reaction when human tissue is exposed to the electromagnetic field is of great significant. The heat effect of the tissue is normally quantified by the Specific Absorption Rate (SAR). SAR tends to be as small as possible to reduce the biological consequences [2]. The SAR value should not be beyond the level of exposure which becomes harmful [3,4]. The International Commission on Non-Ionizing Radiation Protection (ICNIRP) and the Institute of Electrical and Electronic Engineers (IEEE) has set safety standards followed for human safeguard and protection from electromagnetic fields [5]. For instance, the maximum SAR described in the IEEE C95.1:1999 guidelines is 1.6 W/kg for an average mass of 1 g, whereas in the International Commission of Non- Ionizing Radiation (ICNIRP) the standard is specified as 2 W/kg for an average mass of 10 g [3]. Generally, the SAR value is affected by different parameters such as the location of the antenna corresponding to the human body, the strength of the radiation of the antenna, the radiated power intensity, and the categories of the antenna [6]. Furthermore, the values of SAR are determined on the basis of frequency, intensity, near field or far field, the dielectric properties of different tissues, and the reflection, absorption and scattering effects of the related objects in the field close to the exposed body. This work focuses on the construction of a 3D model that is suitable for studying the process of the penetrating EM wave. Furthermore, the evaluation focuses on the power absorption and SAR calculation considering various operating frequencies of the antenna, different distances of the phantom from the antenna, different sizes of the tumour, and various locations of the tumour. The approach of the SAR calculation is examined using an omnidirectional Ultra-Wide Band (UWB) antenna that is commonly used in the application of a microwave image.

A UWB antenna design and simulation is constructed using Computer Simulation Technology (CST) software [7]. The CST software is a supporting tool for 3D electromagnetic simulation that allows high accurate result. This 3D simulator can be used to model any form of 3D design without any experimental errors.

The proposed UWB antenna is designed by adjusting the length of the inverted L-shaped conductor in the ground plane and also the length and width of the feed line [8]. The proposed ultra-band antenna which is fed at the end by an inset feed line generally yields a high input impedance as shown in Figure 1. The feed line is printed above an FR4 dielectric substrate of 1.6 mm thickness. The width of the substrate is given by 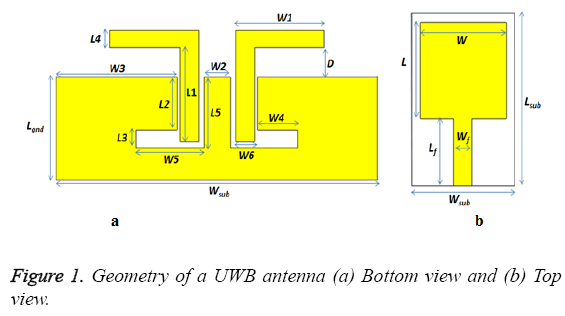 Figure 1: Geometry of a UWB antenna (a) Bottom view and (b) Top view.

Where “c” is the velocity of light in the free space. The minimum value of the effective dielectric constant for a microstrip antenna is

The extension of length is calculated as follows:

Because of the fringing effect at the two edges, the effective length of the microstrip antenna is calculated by the following equation:

In view of the fringing field, the length of the microstrip looks significantly longer than its physical dimension (i.e., the addition of ΔL on both sides). The primary structure of the proposed antenna contains a square shaped radiating patch of dimension L × W=10 × 10 mm2, an inset feed line, and a ground plane. The patch of the antenna is coupled to a feed line with a width of Wf =2.1 mm and length Lf=10 mm. The proposed antenna contains the substrate having a width of Wsub=12 mm and length Lsub=18 mm.

Design of the Homogeneous Breast and Tumour

The detection of the breast cancer based on an ultra-wide band imaging technique is under analysis. UWB imaging method largely depends on the nature of the breast tissue. Therefore, the values of the exact dielectric properties of different breast tissues are not crucial for application of imaging technique. The proportionate values of the dielectric constants for various breast tissues [9,10] are as follows: it is roughly about 1 for fatty tissues and the skin value ranges from 1.5 to 5 whereas the value ranges from 2 to 4 for the fibro-glandular tissue. At the same time, the tumour property varies between 9 and 10 or even more [11,12]. Some researchers reported that these proportions are not fixed and can vary [10,12-16]. Another dielectric property of the tissues present in the human body is related to the amount of the water content [10,12,16,17]. The breast tumour with distinct values of the dielectric constant can be generated by mixing water to wheat flour in different proportions. The simulated breast phantom possesses the following tissue properties, e.g., the tumour model is considered for dielectric properties with a combination of water with wheat flour (55%) as εr=23 and σ=2.57 s/m and the fatty tissue is considered for a dielectric constant of pure petroleum jelly with εr = 2.36 and σ=0.012 s/m [18].

A homogeneous breast phantom of hemispherical shape, consisting of a fatty tissue layer with a radius of 30 mm, is shown in Figure 2a. The shape of the phantom is similar to the breast when the patient is in the prone position. A tumour of the size of 3 mm located in the breast tissue at a distance of 45 mm from the transmitter antenna is shown in Figures 2b and 2c.

Where σ (S/m) represents the conductivity of the biological material, ρ (kg/m3) is the material density, and E (V/m) is the electric field strength.

In this module, the ultra-wideband monopole antenna with different design variables was formulated. The analyses of the SAR and power absorption values of the breast phantom with a change in the location of the tumour, the size of the tumour, variation in the radiation frequency, and variation in the distance between the antenna and the phantom are discussed. The absorption of the electromagnetic wave propagation in the breast tissue is determined using CST software.

The return loss and Voltage Standing Wave Ratio (VSWR) for the ultra-wideband monopole antenna is discussed in Figure 3. Figure 3a shows the simulated S11 curve corresponding to the band of frequency from 2 GHz to 16 GHz. From the Figure, it can be observed that the bandwidth of the proposed antenna is 9.23 GHz. Figure 3b shows that the simulated VSWR characteristics of the monopole antenna are below 2.

Figure 3: Simulated characteristics of the ultra-wideband antenna (a) Return loss (b) VSWR.

Thermal distribution of the phantom

The thermal distribution for a UWB antenna, caused by the propagation of the electromagnetic signal inside the breast phantom has been determined. The strongly affected area nearby the transmitter whose back and front projections with masses of 10 g and 1 g of the tissue with a frequency of 5 GHz are shown in Figures 4a and 4b, respectively.

The distance between the monopole antenna and the breast phantom is 20 mm and they are simulated at a frequency of 5 GHz. The breast phantom is hemispherical in shape, which is the replication of the real breast with a diameter of 30 mm. SAR is calculated using an ultra-band antenna for average masses of 1 g and 10 g of the tissues.

The American countries follow the SAR value with an average of 1 g of the tissue and the European countries follow the value with an average on 10 g of the tissue. The red colour of the tissue corresponds to the most affected area, the gradient colour represents the least affected area, and the blue colour represents the non-affected area. The actual coordinate of the tumour in the fatty tissue of the breast is as follows: x=0 mm, y=0 mm, and z=55 mm. SAR for a mass of 10 g of the tissue does not show the location of the tumour (x=-0.125 mm, y=0.9375 mm, and z=41.8111 mm), but SAR for an average mass of 1 g of the tissue shows the most approximate coordinate of the tumour position (x=0.125 mm, y=0.1875 mm, and z=49.8125 mm). For a frequency of 5 GHz, the extreme temperature is increased to obtain the SAR values of 0.389009 W/kg and 0.142686 W/kg in a monopole antenna for the American and European standards, respectively.

The systematic outcome of the maximum SAR value varies according to the frequency (GHz) as shown in Figure 5. 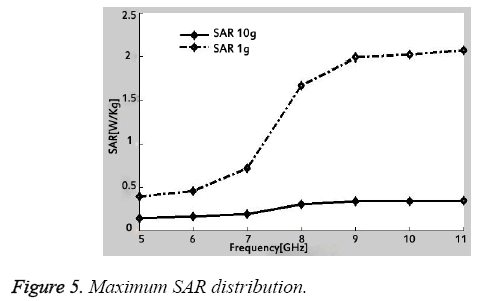 In a microwave imaging technique, a UWB antenna is used to detect the location of the tumour at various frequencies. The analysis shows that the SAR for 1 g and 10 g of the breast tissues becomes larger as the frequency increases. 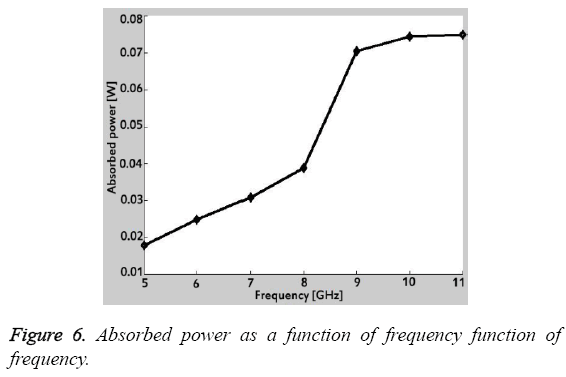 The effective performance of the SAR depends on the distance between the breast tissue and the transmitter antenna. 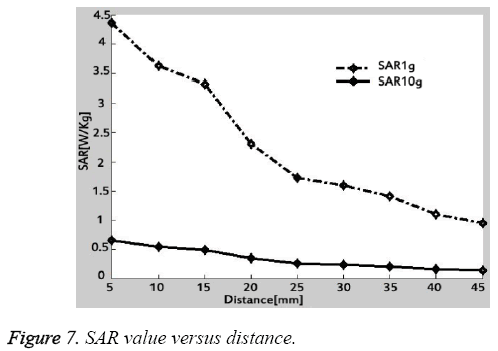 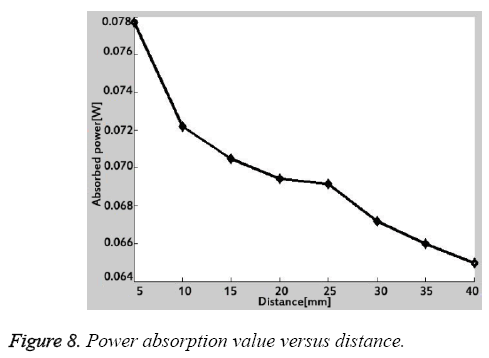 SAR and power absorption variations for different sizes of the tumour

The effective performance of the SAR value depends on different sizes of the tumour, which ranges between 1 mm and 8 mm within the breast tissue and the transmitter antenna. Figure 9 depicts that as the size of the tumour increases the SAR value for the cubic mass of 10 g and 1 g of the tissue increases. 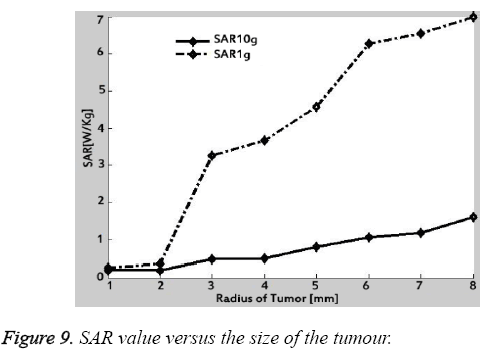 Figure 9: SAR value versus the size of the tumour.

Figure 10 shows that the power absorbed by the tissue increases with the increase in the size of the tumour inside the phantom model. 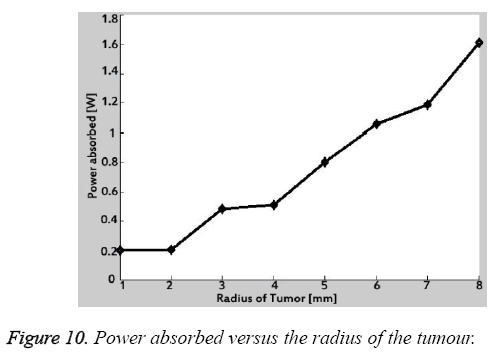 Figure 10: Power absorbed versus the radius of the tumour.

Detection of tumour for 1 g of SAR

Table 2: Location of the tumour for SAR of a mass of 1 g.

The primary objective of this study is to analyse the power absorbed by a tissue and the SAR distribution in the homogeneous breast tissue exposed to an antenna in a microwave imaging application. First, a monopole antenna with an enhanced bandwidth of 4.31-13.63 GHz has been discussed. The given bandwidth range was produced by introducing two pairs of L-shaped slots in the ground layer. In this paper, a careful study has been made of the important characteristics of energy absorption in the breast tissue with a good number of simulations. It has been found that the power absorbed and SAR for average masses of 1 g and 10 g of the tissue increase with the increase in frequency, the size of the tumour and the phantom, while it is contrary with the distance between the transmitter and the phantom. When the breast tissue is exposed directly to the electromagnetic signal, heat energy is produced. Hence, care should be taken during the application of imaging process. In this context, I would also like to suggest that future work may focuses on SAR measurements of the heterogeneous breast tissue using other type of the monopole antenna.