Objective: Sepsis is the leading causes of morbidity and mortality in critically patients in many intensive care units. IL-10 was the major circulating antiinflamatory cytokine that has a role in the pathogenesis of sepsis and septic shock. The aim of this study is to determine the role of IL-10 as an outcome predictor in pediatric sepsis patient. Methods: A total of 70 sepsis patients were included in this study. Plasma specimens were collected at admission, then the patients were followed until the patients get shock or not. The diagnosis of sepsis is IDAI 2016 criteria. Serum IL-10 was measured using Enzyme Linked Immunosorbent Assay technique. Results: The initial serum levels of IL-10 was significantly decreased in both groups, but lower in the septic shock group. Cut of point <255 pg/ml was obtained through the ROC, with the sensitivity 100%, spesificity 100%, positive predictive value 100%, negative predictive value 100% Conclusions: The initial serum level of IL-10 can be used as an outcome predictor in pediatric sepsis patient and the limit of level <255 pg/ml is the most optimal cut off point as a prognostic value.

Sepsis is a clinical syndrome that is triggered by infection; characterized by a number of clinical symptoms include fever or hypothermia, leukocytosis or leukopenia, tachycardia and tachypnea. Various microorganisms act as infectious agents including bacteria, viruses, fungi, protozoa. Various internal and external factors also determine the occurrence of sepsis. Internal factors that will determine are immune factors and apoptosis. If for some reason that causes the immune system pressure, then the individual becomes susceptible to infections. This situation will develop into sepsis or septic shock [1].

IL-10 is an anti-inflammatory cytokine. During infection it inhibits the activity of Th1 cells, NK cells, and macrophages, all of which are required for optimal pathogen clearance but also contribute to tissue damage. In consequence, IL-10 can both impede pathogen clearance and ameliorate immunopathology. Many different types of cells can produce IL-10, with the major source of IL- 10 varying in different tissues or during acute or chronic stages of the same infection. The priming of these various IL-10-producing populations during infections is not well understood and it is not clear whether the cellular source of IL-10 during infection dictates its cellular target and thus its outcome.

The management of sepsis by using anti-microbial alone was not entirely successful. Be aware that eliminating microorganisms that cause alone was not sufficient and proved that the death rate from sepsis remains high [1]. IL-10 in moderation plays a role in systemic inflammation, while high amounts are vital to the occurrence of septic [2].

Based on the description of the background, the authors are interested in conducting study to determine the role of IL- 10 as a predictor of outcome in sepsis patients in children.

This research was conducted in Dr. Wahidin Sudirohusodo Hospital Makassar from September 2016 through February 2017. This study is a prospective observational cohort study, which is first determine the initial serum IL-10 and then the subject was observed until a certain period to see the outcome (septic shock or not).

The study population was all patients who were diagnosed with sepsis according to the criteria of IDAI of 2005, which was treated in the Pediatric Intensive Care Unit (PICU) Wahidin Sudirohusodo Hospital. Samples are the entire population that meets the criteria of inclusion and exclusion. Inclusion criteria were patients with sepsis, age 1 month to 18 years, was willing to sign an informed consent agreement. Exclusion criteria were patients with trauma, burns, malnutrition, malignancy, being received corticosteroid treatment, shock septic and patients with immune deficiency.

Children who met the inclusion criteria and willing to be a sample (obtain permission from parents) and signed an informed consent agreement. After blood sampling, blood samples were centrifuged. Then placed in a tube without any anticoagulant, was kept at a steady temperature 2-8°C for 3 month or -20°C until adequate sample size.

All the data obtained are recorded in the research data form and then grouped by the destination and type of data. Appropriate statistical methods was used analyse the data, namely: 1) the univariate analysis; and 2) the bivariate analysis which includes: test Student's t, Mann Whitney Test, X2 (Chi square) or Fisher's Exact test, to assess the accuracy limit levels as a predictor, calculating the sensitivity, specificity, positive predictive value and predictive value negative (with CI 95%).

To assess the cut-off point levels of IL-10 in determining the outcome can best be seen in the Receiver Operator Curve (ROC) (Figure 1). Sensitivity depicted on the ordinate Y, while the 1-specificity depicted on the axis X. Value IL-10 that is farthest from the diagonal line and approaching the top left corner with the largest area under the curve (1) is a point on the boundary value of the initial serum IL-10<255 pg/ml. The value on the cut-off point is the most optimal value as prognostic value in determining the outcome. 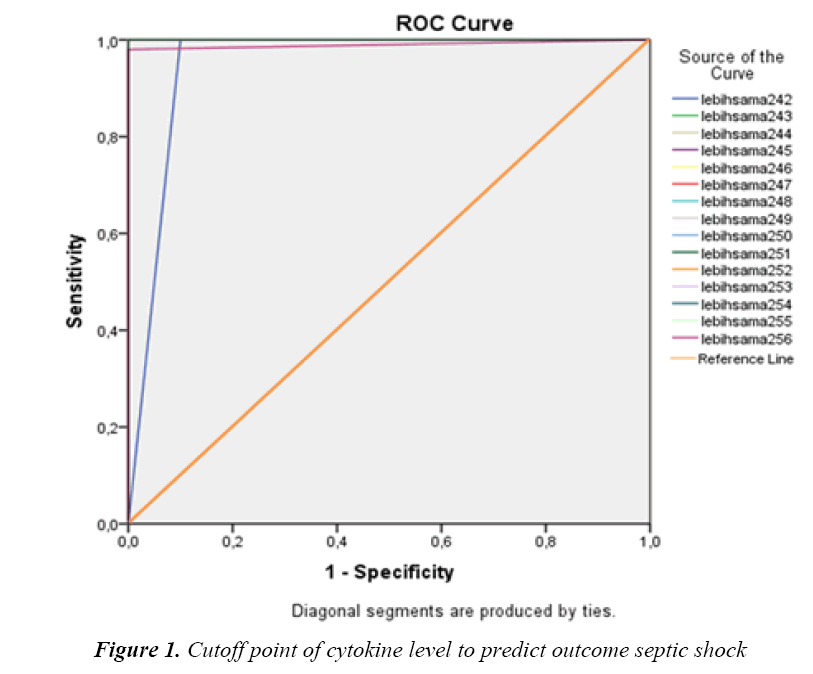 This study showed that the serum levels of IL-10 can be used as an early predictor of outcome in sepsis patients in children and limit levels ≥ 255 pg / ml is the most optimal as a prognostic value.

There are 70 samples in this study followed up in this study, in the end the samples are grouped into 50 samples (64.3%) that did not become septic shock and 20 samples (35.7%) which become septic shock. The analysis conducted on the effects of the factors sex, nutritional status, age, and initial serum levels of IL-10. In this study, we found that gender is not a prognostic factor in sepsis. Similar results were reported by Wong et al. [3] in the United States and Bozza et al. [4] in Brazil that children with sepsis, survivors or non-survivor, did not differ significantly between boys and girls. Similar results were obtained in a study conducted by, in which patients with sepsis non survivor or survivors did not differ significantly between boys and girls. In research conducted in Manado report found no significant differences between patients with sepsis and septic shock in children based on gender (P=0.261) [5].

The mean serum levels of IL-10 early sepsis patients who become septic shock (139.72 pg/ml) were significantly lower compared with patients with sepsis who did not become septic shock ( 738.12 pg/ml). The concentration of IL-10 in the circulation is generally low and not detected in healthy subjects (no more than 10 pg / mL) [6]. This study showed that the serum levels of IL-10 have been decreased since the early onset of the disease. The invasion of pathogenic microorganisms and or its products will stimulate the proinflammatory cytokines. The main pro-inflammatory cytokines that play an important role in the pathogenesis of sepsis is TNF-α, IL-1, IL-6 and IL-8. Tumor necrosis factor alpha can work on the hypothalamus causes fever. Tumor necrosis factor alpha also activate various types of cells such as monocytes, macrophages, dendritic cells and neutrophils, and together with IL-6 induces an acute phase response. Tumor necrosis factor alpha can also induce a procoagulant activity and endothelial cell damage that interfere with blood flow to the organ system and oxygen supply [7]. IL-10 has important regulatory effects on immunological and inflammatory responses because of its capacity to down regulate class II MHC expression and to inhibit the production of proinflammatory cytokines by monocytes.

Mann Whitney results shows that there are very significant differences between the two groups with p=0.000. This occurs because the infected macrophages to produce cytokines TNF-α are more, along with the anti-inflammatory cytokine levels are still low, causing pathological effects. TNF-α cytokine function is to stimulate the expression of adhesion molecules on vascular endothelium and leukocytes which will lead to increased vascular permeability and inflammatory reactions. At high levels, TNF-α induce pathologic abnormality of septic shock.2 Interleukin 10 (IL-10) is a cytokine with potent anti-inflammatory properties that plays a central role in limiting host immune response to pathogens, thereby preventing damage to the host and maintaining normal tissue homeostasis. Dysregulation of IL-10 is associated with enhanced immunopathology infection. Results of previous studies have shown that IL- 10 is a good marker for the diagnosis of sepsis, to assess the effectiveness of therapy, and prognosis of disease sepsis [8]. obtained a mean serum IL-10 at the beginning of admission were lower in patients who shock sepsis (108 ± 267.22 pg/ml) and decreased mean serum IL-10 in sepsis patients who sepsis not shock 103.32 ± 98.45 pg/ml.

Serum initial level of IL-10 <255 pg/ml had a sensitivity of 100%, a specificity of 100%, 100% positive predictive value, negative predictive value of 100% (p = <0.001) and area under the curve (AUC) 1. Limit levels initial serum IL-10 255 pg/ml is the best cut point for the early detection of sepsis patients in determining the outcome, which examined proinflammatory cytokines procalcitonin, TNF-α, IL-6, IL-8, obtained procalcitonin and TNF-α is a best marker in the diagnosis of neonatal sepsis, determine the effectiveness of therapy, and prognosis of sepsis. In this study, the point of intersection of TNF-α levels were higher than in other studies i.e. <255 pg/ml, probably due to genetic polymorphisms, or different underlying disease, or people who are frequently exposed skin infections, worms, or other infections, the levels of IL-10 initial serum can be used as a prognostic factor in determining outcome, but keep in mind that IL- 10 is not the only prognostic factor in determining the outcome, there is still an antiinflammatory cytokines and other inflammatory risk factors.

Limitations of this study are: no assessment ratio cytokine pro inflammatory and antiinflammatory. While the strength of this study is a prospective cohort design is used so that we can follow the effects of these prognostic factors simultaneously, and also determine the cut-off point of serum levels of IL-10 early as prognostic factors using a Receiver Operator Curve (ROC) (Tables 2 and 3).

Table 2: Initial serum level of IL-10 in septic shock patient who become shock and not shock