Resveratrol is a stilbene compound with high polarity. Conventional extraction and purification methods reported in the literature include organic solvent extraction, preparative HPLC extraction, supercritical extraction and macroporous resin extraction [9,10]. Originated in the 1970s, macroporous adsorption resin is a new organic high polymer adsorbent, which is characterized by relatively stable nature, selective adsorption, mild desorption conditions, easy regeneration, and repeated usability. In recent years, macroporous adsorption resin has been widely used in the pharmaceutical industry, especially in the purification and enrichment of functional constituents in traditional Chinese and natural medicine.

Coarse Polygonum cuspidatum powder (40 mesh) was extracted at 60℃ with 8-fold amount of 60% ethanol solution for 1 h twice, then the filtrates were combined, and solvent was removed to obtain the sample solution.

Absorbance of resveratrol in solution was measured using a spectrophotometer, and detection wavelength was 306 nm with ethanol as the reference.

Practicality of different types of resins was investigated by static adsorption method. Each 5 g of different types of resins were accurately weighed, and packed in the column by wet method. 30 ml of resveratrol (0.90 mg/mL) was slowly added to different resin columns, and a certain volume of supernatant was aspirated at set intervals to measure the absorbance of resveratrol. Desorption rate was calculated, resveratrol adsorption and desorption performances of various resin models were determined, and the optimal volume fraction of desorption liquid, ethanol, was investigated.

The results showed that the resveratrol adsorption and desorption capacities of D101 macroporous resin reached 65.548 mg/g and 59.6254 mg/g, respectively, and the elution rate was 92.54%. After comprehensive consideration, D101 macroporous resin was selected for the enrichment and purification of Polygonum cuspidatum extract, shown in Table 1.

Investigation of enrichment and purification process with D101 macroporous resin

Influence of adsorption rate on adsorption results Polygonum cuspidatum extract with a mass concentration of 0.84 mg/mL was taken, and sample solution flow rates were controlled at 1, 2, 3, 4 and 5 BV/h, respectively. Sample was first eluted with 3 BV of water, and then desorbed with 5 BV of ethanol (75%). Desorption solutions were collected, and resveratrol content in desorption solutions was determined by spectrophotometry, followed by calculation of desorption rate, shown in Figure 1.As can be seen from the experimental results, different flow rates had an evident influence on the adsorption results of Polygonum cuspidatum extract. Absorption efficiency of D101 macroporous resin decreased with the increase of flow rate; at a flow rate of 5 BV/h, its Polygonum cuspidatum extract adsorption rate already dropped to 56.59%. After taking into account the actual production conditions and considering all factors, flow rate was set as 2 BV/h. 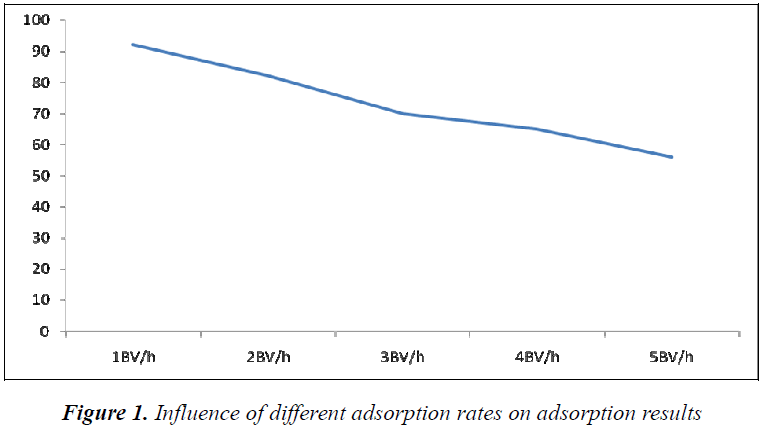 The data showed that the cumulative percentage reached 96.24% when 3-fold amount of ethanol was used to elute 10 ml of Polygonum cuspidatum extract (concentration of 0.84 mg/ml), basically reaching the elution endpoint, shown in Table 2.

Determination of optimal elution volume 10 ml of the above Polygonum cuspidatum extract solution was accurately drawn, and adsorbed on D101 macroporous resin column for 40 min, then washed with a 4-fold amount of distilled water, and then eluted with a 5-fold amount of 75% ethanol; eluent flow rate was 2 BV/h. A total of five portions were collected with 1 BV as one portion.

Determination of cytotoxicity of Polygonum cuspidatum extract by MTT assay After trypsinization, concentration of the logarithmic phase SW480 cells was adjusted to 5×104/mL. Then, the cells were seeded in a 96-well culture plate, and cultured in a 37℃, 5% CO2 incubator for 12 h. The 96-well culture plate was randomly divided into six groups, and each group had 8 replicate wells. The wells were added with different concentrations of Polygonum cuspidatum extract solution (20 mmol/L, 40 mmol/L, 60 mmol/L and 80 mmol/L), and control group was added with equivalent volume of culture medium. After culturing for another 72 h in a 37℃, 5% CO2 incubator, supernatant was discarded, and each well was added with 10 μL of 0.5 mg/mL MTT solution, and cultured for an additional 4 h. Next, supernatant was discarded, and each well was added with 150 μL of DMSO, and shaken for 10 min. After mixing uniformly, absorbance value was measured, and cell inhibition rate was calculated.

TEM observation Well grown SW480 cells were passaged in 10 mL culture flasks, and incubated in a 37℃, 5% CO2 incubator for 24 h. Then the medium was discarded and in one flask was added 60 mmol/L Polygonum cuspidatum extract, while in the other flask was added blank medium to serve as the control. After culturing for 48 h, cells were trypsinized routinely, centrifuged, and fixed in 2.5% glutaraldehyde solution at 4℃ for 2 h. After washing with PBS, the cells were fixed in 1% osmium tetroxide, PBS washed twice, gradient dehydrated with ethanol, impregnated, embedded in epoxy resin, and prepared into ultrathin sections for TEM observation.

Under the electron microscope, nuclear morphology of human SW480 cells was regular, in a round shape; membranes were intact, with a large number of microvilli on their surface. Nuclei contained rich euchromatin and few heterochromatin, and no marked chromatin margination was seen. Nuclear fission was present, with multiple nucleoli; there were a large number of mitochondria, which were mostly oval, and had integrated structure; organelles like endoplasmic reticula, mitochondria and lysosomes were visible. Cells in the treatment groups were swollen; membranes started to foam; mitochondria, endoplasmic reticula, and chromatin in swollen nuclei were marginated, showing varying degrees of degenerative deformation. Typical apoptotic cells were visible; cell bodies shrank, cytoplasm condensed, nucleoli disappeared, heterochromatin was marginated, and apoptotic bodies were about to be formed.

Macroporous resin is a macromolecular adsorbent with macroporous structure, which does not contain exchange groups. As a new adsorbent gradually developed since the 1960s, it is a class of high-molecular polymers characterized by adsorption, which has organic matter concentration and separation actions. Depending on its framework materials, it can be divided into three categories: polar, neutral and non-polar ones.

Resveratrol molecules have a polyphenol structure, which are weakly polar. In general, resins with strong adsorption capacity are characterized by relatively difficult desorption. Therefore, the resin to be used is not only required to have large adsorbing capacity, but also high desorption rate, in order to ensure the maximum recovery of active constituents.

Colorectal cancer is one of the major malignancies seriously harming human health worldwide. According to statistics [11], detection rate of colorectal cancer ranks second in women, and third in men. At present, its main clinical treatments are basically the same with other cancer therapies, which are suppression of tumor cell growth and proliferation through radiotherapy and chemotherapy. But due to poor drug targeting, serious damage is caused to patients' body, and tumor metastasis, proliferation and deterioration occur occasionally, seriously affecting the cure and quality of life of patients. Natural medicine extracts with anticancer activity are commonly used in clinical settings as a postoperative adjunctive therapy for cancer patients, in order to relieve the patients' pain. Therefore, the research and development of Chinese medicine preparations with anticancer activity have become a hot research topic among researchers.