Autoimmune inflammatory diseases, such as rheumatoid arthritis (RA), have been thought to be mediated by the cytokine interleukin 17 (IL-17). Curcumin (1,7-Bis (4-hydroxy-3-methoxyphenyl)-1,6 heptadiene- 3, 5-di-one) is an active ingredient derived from rhizomes of Curcuma longa Linn., displaying remarkable anti-inflammatory. Curcumin has been re-ported to have the suppressive effect on the development of an experimental animal model of RA, collagen-induced arthritis (CIA). However, there is no evidence for the effect of cur-cumin on IL-17 production of CIA mice. In the present study, we demonstrated that curcu-min inhibited the production of IL-17 in vitro. The treatments of curcumin exhibited an in-hibitory activity against CIA. We further demonstrated that curcumin suppressed IL-17 production of CIA mice using enzyme-linked immunospot assay and intracellular cytokine staining. We reported that curcumin had the inhibitory activity on IL-17 production in CIA mice. The suppression of CIA might result from the inhibition of IL-17 production.

Previous studies have revealed that treatment with a neu-tralizing interleukin (IL) -17 antibody after the onset of collagen induced arthritis (CIA), which is an experimental animal model of rheumatoid arthritis (RA), significantly reduces the severity of CIA [1]. IL-17-deficient mice are resistant to the development of CIA [2]. Moreover, high level of IL-17 expression is detected in the target tissues during the progression of various human autoimmune diseases [3]. These data suggest that IL-17 plays a key role in the induction and propagation of autoimmunity [4].

Curcumin (1,7-Bis (4-hydroxy-3-methoxyphenyl)-1,6 he-ptadiene-3,5-di-one) is an active ingredient derived from rhizomes of Curcuma longa Linn., displaying remarkable antiinflammatory and antiarthritic activities. These bene-ficial effects have been attributed to the capacity of cur-cumin to prevent activation of nuclear factor-kappa B and the subsequent overexpression of proinflammatory media-tors; cytokines, adhesion molecules, cyclooxygenase-2, phospholipase A2, myeloperoxidase, collagenase, as well as to its ability to modulate activities of T lymphocytes and macrophages [5-8].

In the present study, we demonstrated that curcumin di-rectly and significantly inhibited production of IL-17 in vitro. Moreover, we examined that the effect of curcumin on an experimental animal model of RA [11], which was IL-17 mediated autoimmune disease [3].

Six-week-old female DBA/1J mice were purchased from Nihon SLC, Shizuoka, Japan. All experiments were con-ducted in accordance with the institutional ethical guide-lines for the care and use of laboratory animals of Chiba Institute of Science.

Native bovine type II collagen (BCII, Chondrex, Red-mond, WA, USA) was emulsified in complete Freund’s adjuvant (CFA, Chondrex, USA). The mice had 100 μg BCII in CFA injected subcutaneously to the base of the tail. A booster injection containing 100 μg emulsified BCII in incomplete Freund’s adjuvant (IFA, Chondrex) was given intraperitoneally on day 21 after the first im-munization [11]. Arthritis scores were assigned according to Wood’s assessment [12]. All paws except the injected paw were graded from 0 to 4 points. The score was de-fined as the sum of the scores of all paws of each mouse.

Curcumin (Sigma-Aldrich, St. Louis, MO, USA) was dis-solved in 0.4 % methylcellulose (Shin-Etsu Chemical In-dustry, Co., Ltd., Tokyo, Japan), and orally administered to the mice at 100 mg/kg daily from day 21 until the end of the experiment (day 33). Mice in the control group re-ceive equal volume of 0.4 % methylcellulose solution.

The mice were sacrificed by cervical spine dislocation. After they had been sacrificed, their spleens were asepti-cally removed and crushed into a single cell suspension, and their red blood cells were lysed with Tris-buffered ammonium chloride. The single-cell suspensions were prepared in RPMI 1640 medium containing 10 % heat-inactivated fetal calf serum (FCS, Invitrogen, Life Tech-nologies Co., Carlsbab, CA, USA).

Detection of cytokine production by ELISA

Splenocytes (2x106 cells/ml) were stimulated with phor-bol myristate acetate (PMA, 0.05 μg/ml) and ionomycin (1.μg/ml) at 37 °C for 48 hours, and the concentrations of IL-17A in the supernatants were determined by ELISA (R&D Systems Inc., Minneapolis, MN, USA), according to the manufacturer’s instructions.

Single cell suspensions (1x106 cells/ml) of each group were stimulated with PMA (0.05 μg/ml) and ionomycin (1. μg/ml) for 5 hours. The total RNA of the cells was iso-lated by the acid guanidinium thiocyanate-phenol-chloroform extraction method using RNAiso plus (Takara Inc, Kyoto, Japan). RNA was then reverse transcribed to cDNA using reverse transcriptase (ReverTra Ace, Toyobo, Osaka, Japan) with Oligo dT primer. The real-time PCR mixture consisted of 2.5. μl of SYBR Green Buffer, 2mM MgCl2, 1mM dNTP, 0.01U/ml AmpErase uracil N-glycosylase, 0.05ŨAmpliTaq Gold (Applied Biosys-tems, part of Life Technologies Co., Carlsbad, CA, USA), forward and reverse primers (200 nM for IL-17A and glyceraldehyde-3-phosphate dehydrogenase, GAPDH), and 2 μl cDNA samples in a total volume of 25 μl. The primer sequences are shown in Table 1. The PCR reac-tions were performed in a MicroAmp optical 96 well re-action plate for 40 cycles (95°C for 15 seconds, 60 °C for 1 minute) in the ABI Prism 7500 Sequence Detector (Ap-plied Biosystems). The fluorescent signals (δCt) detected during the threshold cycle were recorded by the software installed on the machine. To standardize the target gene level with respect to the variability in RNA and cDNA quality, GAPDH was amplified under the same conditions as an internal control.

To evaluate the number of IL-17 producing cells, an en-zyme-linked immunospot (ELISPOT) assay was per-formed [14]. Splenocytes (2x106 cells/ml) were stimulated with PMA (0.05 μg/ml) and ionomycin (1.μg/ml) at 37 °C for 5 hours. The stimulated cells were recovered and added to a plate (MultiScreen Filter plates, Millipore Cor-poration, Bedford, MA, USA) that had been coated with 50 μl of 4 μg/ml monoclonal rat anti-mouse IL-17A (R&D Systems Inc., MN, USA) in carbonate buffer and incubated overnight at 4 °C . The plate was then incu-bated at 37 °C for 12 hours. Thereafter, the plate was washed, and biotinylated goat anti-mouse IL-17A anti-body (50 μl, 300 ng/ml, R&D Systems Inc.) was added, before the plate was incubated for 2 hours at room tem-perature. The plates were then washed, and 50.μl of HRP-conjugated anti-biotin goat polyclonal antibody (1/5000, Vector Laboratories, Inc.) were added, and then the plates were incubated for 1 hour at room temperature.

The plate was then washed and 50 μl of 3-amino-9-ethylcarbazole (AEC) substrate (Vector Laboratories, INC., CA, USA) were added. The developed spots were then enumerated under low magnification (x40) with a microscope.

The effect of curcumin on the IL-17 production of splenocytes 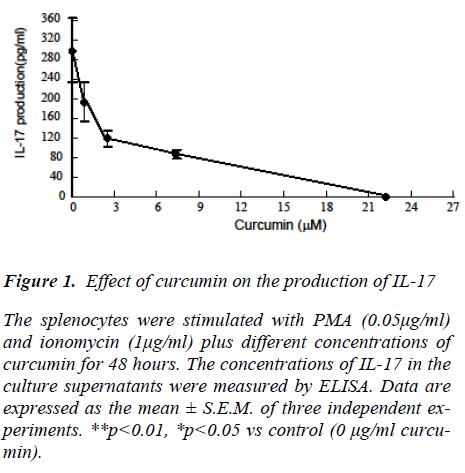 Figure 1: Effect of curcumin on the production of IL-17 The splenocytes were stimulated with PMA (0.05μg/ml) and ionomycin (1μg/ml) plus different concentrations of curcumin for 48 hours. The concentrations of IL-17 in the culture supernatants were measured by ELISA. Data are expressed as the mean ± S.E.M. of three independent ex-periments. **p<0.01, *p<0.05 vs control (0 μg/ml curcu-min).

The effect of curcumin treatment on CIA mice

As shown in Fig. 2, the curcumin-treated mice exhibited statistically significant lower arthritis scores than the con-trol mice. Thirteen days exposure to curcumin did not affect the growth of the mice, as determined by their body weight (data not shown). 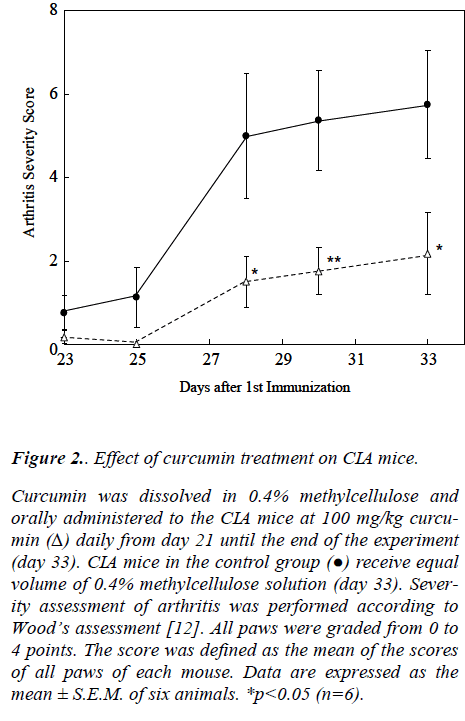 Figure 2: Effect of curcumin treatment on CIA mice.
Curcumin was dissolved in 0.4% methylcellulose and orally administered to the CIA mice at 100 mg/kg curcu-min (Δ) daily from day 21 until the end of the experiment (day 33). CIA mice in the control group (●) receive equal volume of 0.4% methylcellulose solution (day 33). Sever-ity assessment of arthritis was performed according to Wood’s assessment [12]. All paws were graded from 0 to 4 points. The score was defined as the mean of the scores of all paws of each mouse. Data are expressed as the mean ± S.E.M. of six animals. *p<0.05 (n=6).

To determine how curcumin affect IL-17 production in CIA mice, intracellular cytokine staining and ELISPOT was used to detect IL-17 producing cells. ELISPOT assay showed that statistically significant decreases in the num-bers of IL-17 producing cells were observed in the cur-cumin treated CIA mice (Fig. 3a). The flow-cytometric analysis also demonstrated the decreased number of IL-17 positive cells in the splenocytes of the curcumin treated CIA mice (Fig. 3b). 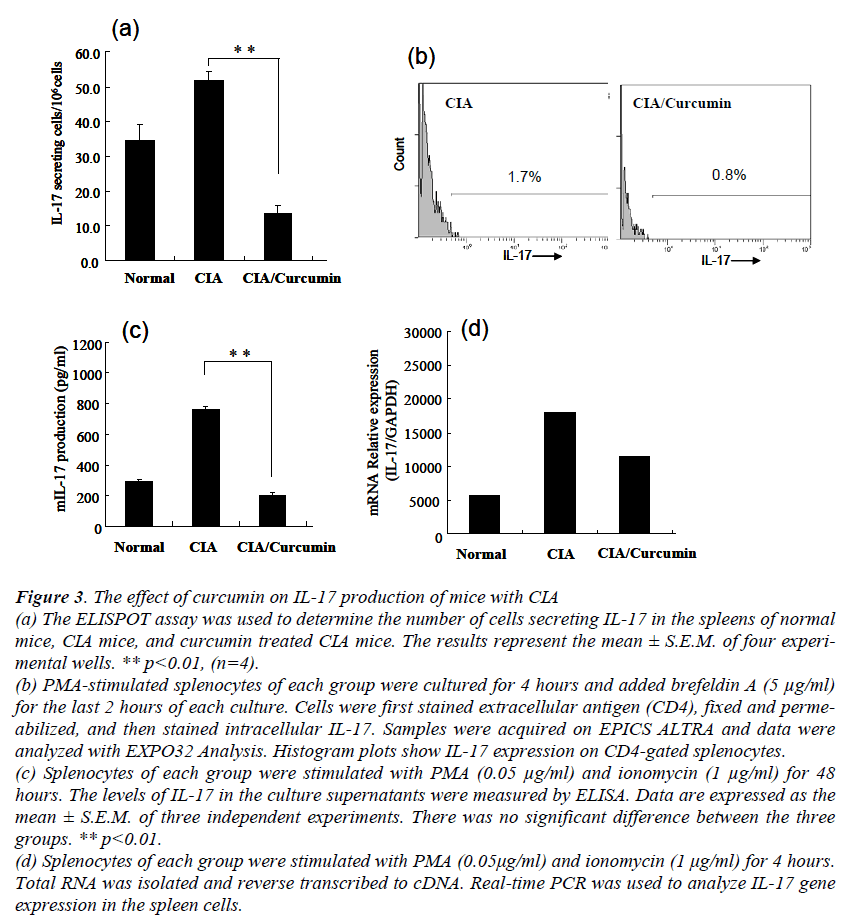 Furthermore, to analyze their cytokine production, the splenocytes of each group were stimulated with PMA and ionomycin for 48 hours.

We showed the IL-17 production of spleen cells in vitro was significantly decreased in a dose dependent manner by the addition of curcumin (Fig. 1). Curcumin might have a suppressive activity on IL-17 production. IL-17 has been reported to aggravate the symptoms of the ex-perimental arthritis mice [2,16,17]. Thus, we examined that curcumin would be able to reduce the severity of the experimental arthritis model. Treatment of mice with cur-cumin decreased the clinical symptoms of CIA (Fig. 2).

The results show that curcumin has the inhibitory effect on the development of CIA, and agree with the previous studies [9,10].

To assess IL-17 producing cells in CIA mouse, ELISPOT assay (Fig. 3a) and intracellular IL-17 staining (Fig. 3b) were performed. A significant decrease of IL-17 produc- ing cells in the curcumin-treated CIA mice was observed. This suggests that curcumin inhibits IL-17 production in CIA mice.

The detail mechanisms of RA remain unknown. After 2 decades after proposal of the Th1/Th2 paradigm[18,19], Th17, a new subset of helper T cells has entered the field of autoimmunity[16,20]. Recent researches showed de-fective Th17 differentiation do not develop CIA [2,21].

Curcumin is also known for the specific inhibitor of nu-clear factor KB (NF-KB) and subsequent anti-inflamma-tory activity [22,23]. NF-B/Rel proteins are ubiquitous transcription factors that are activated in T lymphocytes and regulate the immune response and the pathogenesis of autoimmune arthritis [24].

In summary, we showed that curcumin directly and sig-nificantly inhibited production of IL-17 by splenocytes. Furthermore, we demonstrated for the first time that cur-cumin had the inhibitory effect on the development of CIA by the supression of IL-17 production.

The authors would like to acknowledge the financial sup-ports rendered by the Urakami Foundation (2009).