The occurrence of cancer closely parallels progressive immune evasion in which nascent cancer cells escape from active immune surveillance. Immune evasion in cancer involves a variety of sophisticated mechanisms including inhibition of homeostatic regulatory cell function, defective cancer cell antigen presentation, and secretion of soluble immune suppressive factors [1]. A better understanding of these mechanisms would be of great benefit to cancer therapy and prevention. The elimination of cancer cells in vivo relies at least partially on the role of immunocytes, and there exist a variety of innate and adaptive immune cell subsets that are currently in use for cell therapy of cancer [2-10]. Cytotoxic T-lymphocytes (CTLs) and natural Killer (NK) cells are the two most widely studied immunocytes in cancer immunity. Both of these immune cell subsets exhibit powerful cytoreductive killing function but through very different mechanisms of action. CTLs work through the T cell receptor (TCR) which recognizes MHC class I complexed with specific peptide antigens on the target cell surface [11-13]. In contrast, NK cells possess ligandbased activating and inhibitory receptors (KIRs) which inhibit NK cell killing when bound to cells expressing normal levels of MHC but actively kill bound target cells that exhibit loss of MHC and/or up-regulation of stress-induced ligands [14-16]. Thus, CTLs and NK cells work through opposing mechanisms to eliminate cancer cells in the body. In previous therapeutic studies, investigators have applied either CTLs (including CAR-T cells) or NK cells with promising preliminary results, yet complete eradication and remission is not often observed in the monotherapeutic setting [2,5,6,15].

In our recent studies involving primary cancer cell culture, we observed that cancer cells often express MHC molecules at variable levels and that the mean density of MHC expression, as detected by flow cytometry, is different at different stages of culture. This critical observation lead us to investigate if similar shifts in MHC class I antigen expression could also occur in response to cytoreductive selective pressures from CTL or NK cells. Adoptive transfer of combined NK and CTLs was also tested to validate in vitro experimental results in an in vivo model system.

Commercially available pairs of autologous human cancer cells (small cell lung cancer [PLs008]) [17] and peripheral blood mononuclear cells (PBMC, [Mnc013], ZYX Biotech) from a normal healthy donor (as allogenic NK cell targets) were used in this study. Cancer cells were approximately 80% MHC class I-positive and 100% CD45-negative. All mononuclear cell fractions contained at least 108 CD3+CD45+ cells and all were positive for CD45. Cytokines and other reagents for CTL and NK cell culture and detection have been described previously [17-21]. PLs008 cancer cells were used as stimulators for CTL expansions and as targets for CTL and NK cell lytic assays. Autologous PBMC were bioreactor-sorted18 to separate CD3+ and CD3- fractions which were then stimulated to generate CTL and NK cell effectors respectively. An established protocol [17-21] with slight modifications was used in this study. Briefly, (1) CD3+ and CD3- cells from the mononuclear fraction were separated in the bioreactor. The CD3+ cells were maintained in the original reaction chamber (1st RC) for CTL expansion whereas the CD3- cells were sorted into an auxiliary reaction chamber (2nd RC) for NK cell expansion. (2) For CTL expansions, cancer cells were grown and enriched in cell culture bags of ZYX Bioreactor for 6 days as described above. Irradiated (20 Gy) cancer cells were cultured with the corresponding autologous CD3+ cells in the ZYX Bioreactor [13,17] in 8 ng/mL IL-2 and 10 ng/mL IL-7 for 12 days, as determined by the ZYX bioreactor control algorithm [17]. (3) For NK cell expansions, autologous or allogenic CD3- cells were cultured in 8 ng/mL IL-2, 50 ng/ml IL-12 and 10 ng/ ml IL-18 for 12 days as determined by the ZYX btr control algorithm [13,17,22-24]. All cytokines were purchased from PeproTech (Rocky Hill, NJ). (4) Following cell expansion, CD8+ cells were isolated from the 1st RC (for CTL enrichment) and CD56+ cells were isolated from the 2nd RC (for NK cell enrichment) by the automated bioreactor-embedded cell sorter using anti-CD8 and anti-CD56 magnetic separation beads (Miltenyi Biotec, San Diego, CA) as described previously [17]. After isolation, purities of CD8+ cells and CD56+ cells were >95% and >92%, respectively, and CD8+CD137+ activated CTL [25-28] and CD56+CD69+ activated NK cell was >88% and >81%. Controls consisted of SEB-stimulated cells, unstimulated cells, and/or cells stimulated with autologous and allogeneic tumor cells. For allogenic effectors, only NK cell expansion and enrichment were conducted.

Cancer cell seeding density was 0.2 × 106/ml; CTL, NK cell, and autologous PBMC seeding density was 0.5 - 1.0 × 106/ml. IL-2 was added at a concentration of 8ng/ml during the cytolytic expansion. Cells were cultured for 10 days and cells were examined for their MHC class I expression by flow cytometry at the end of co-culture.

in vitro cytotoxic assays were performed as described previously [13,17-21] using lung cancer cells as stimulators for the CTL assay and as targets for both the CTL and NK cell assays. The LDH Cytotoxicity detection Kit (Clontech, Mountainview, CA) was used for cytotoxicity analysis according to the manufacturer’s instructions with slight modification as described previously [17-21].

Cancer cells were enriched and injected subcutaneously into NOD/scid mice as described previously [17]; cancer-specific CTLs and NK cells were prepared as described above and adoptively transferred into mice by tail vein injection 24 hours after cancer cell implantation. Four weeks and six weeks after cancer cell inoculation, the size of subcutaneous cancer nodules was measured (length × width × thickness [mm3]) in a blinded fashion.

Animals were maintained at Zyxell Inc in accordance with an IRB approved protocol and according to the principles expressed in the National Institutes of Health, USPHS, Guide for the Care and Use of Laboratory Animals. Female 12-16 week-old NOD/ scid mice (Charles River Laboratories, Wilmington, MA) were housed in a specific pathogen-free environment in which cages covered with barrier filters were housed in laminar flow hoods. Twenty four hours before cancer cell inoculation, mice were given 3.5 Gy gamma-irradiation as previously described [17]. Each irradiated NOD/scid mouse (6 per cohort) received 1 × 106 lung cancer cells subcutaneously in the dorsolateral thorax and 2 × 106 expanded CD8+ T cells or NK cells by intravenous injection 24 hours later. Tumor size was measured in a blinded fashion every other week for 6 weeks. In the in vivo human CTL study, the human lung cancer cells from the same patient were used as stimulator cells (irradiated at 20 Gy) for CTL expansion and as target cells for subcutaneous inoculation, and the CTL and autologous NK cells were from the peripheral blood of the same patient and the allogenic NK cells were from a healthy donor.

Analysis of variance was used to compare the numbers of CTL and NK cell and the percent cell lysis between different groups. SAS and SAS Statview (SAS Institute, Cary, NC, USA) were used to perform analyses. A p-value <0.05 was considered to be significant. All experiments are the result of six repetitions unless stated otherwise.

Cryopreserved cancer cells derived from lung cancer, breast cancer, prostate cancer, ovarian cancer, and liver cancer were cultured in the ZYX bioreactor, and MHC class I surface expression was analyzed by flow cytometry on culture days 0, 3, and 6. All five cell lines expressed highly variable levels of MHC class I as reflected by fluorescence intensity and total number of positive cells. As shown in Figure 1A and 1B, both of these declined significantly (p<0.05) during culture. Cells from different cancer tissues exhibited variable fluorescence intensity and total numbers of positive cells, indicating that the MHC class I expression on cancer cells can be unstable and/or inconsistent.

) were cultured in a ZYX Bioreactor. Cells were analyzed by flow cytometry for MHC class I expression on culture days 0, 3, and 6. Fluorescence intensity (1A) and positive cell percentage (1B) of MHC class I antigen expression was highly variable among the different cancer cell lines and decreased following culture with all cancer cells.

Among these cancer cell lines, the cells from prostate cancer, ovarian cancer, and liver cancer did not exhibit significant responses to CTL toxicity, and the breast cancer had a limited cell number. Therefore, these cell lines could not be used for the studies on the effects of CTLs and NK cells on cancer cell immune evasion, and only lung cancer cells (PLs008) were applied to further studies [17]. 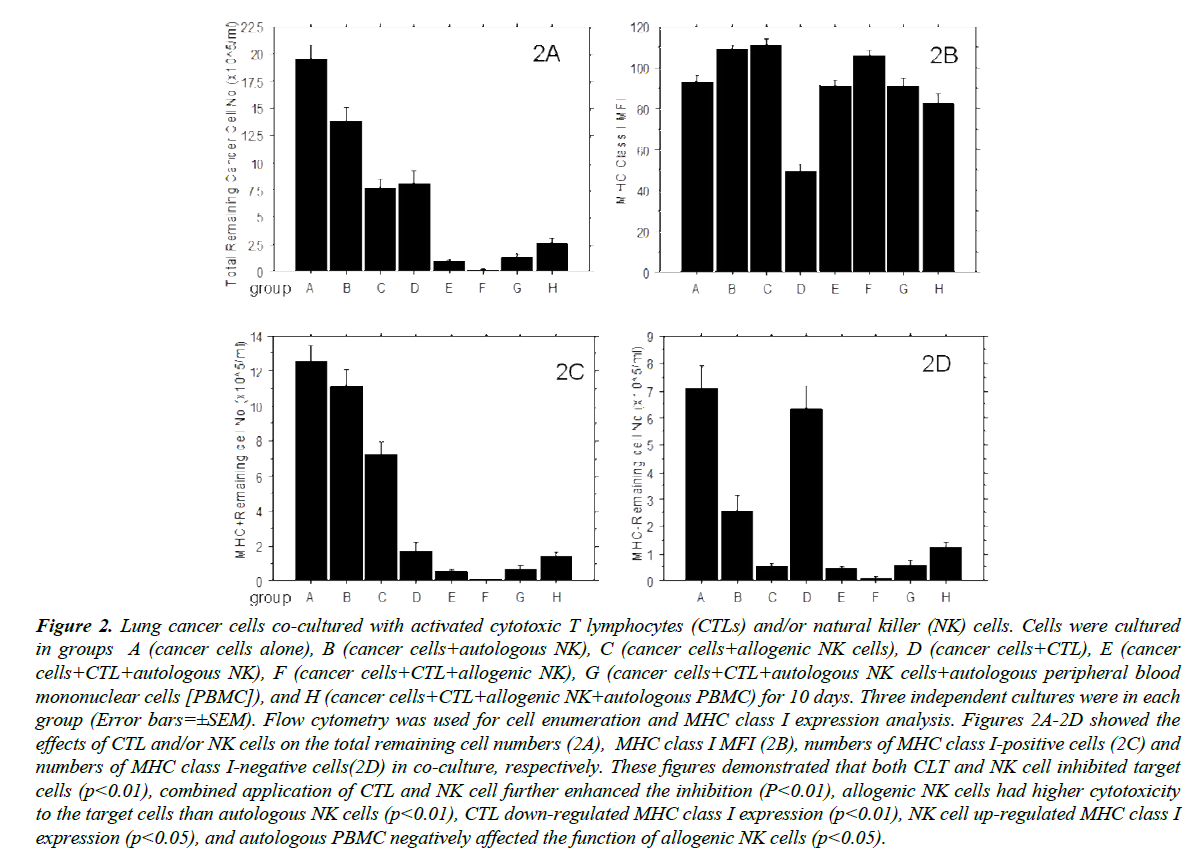 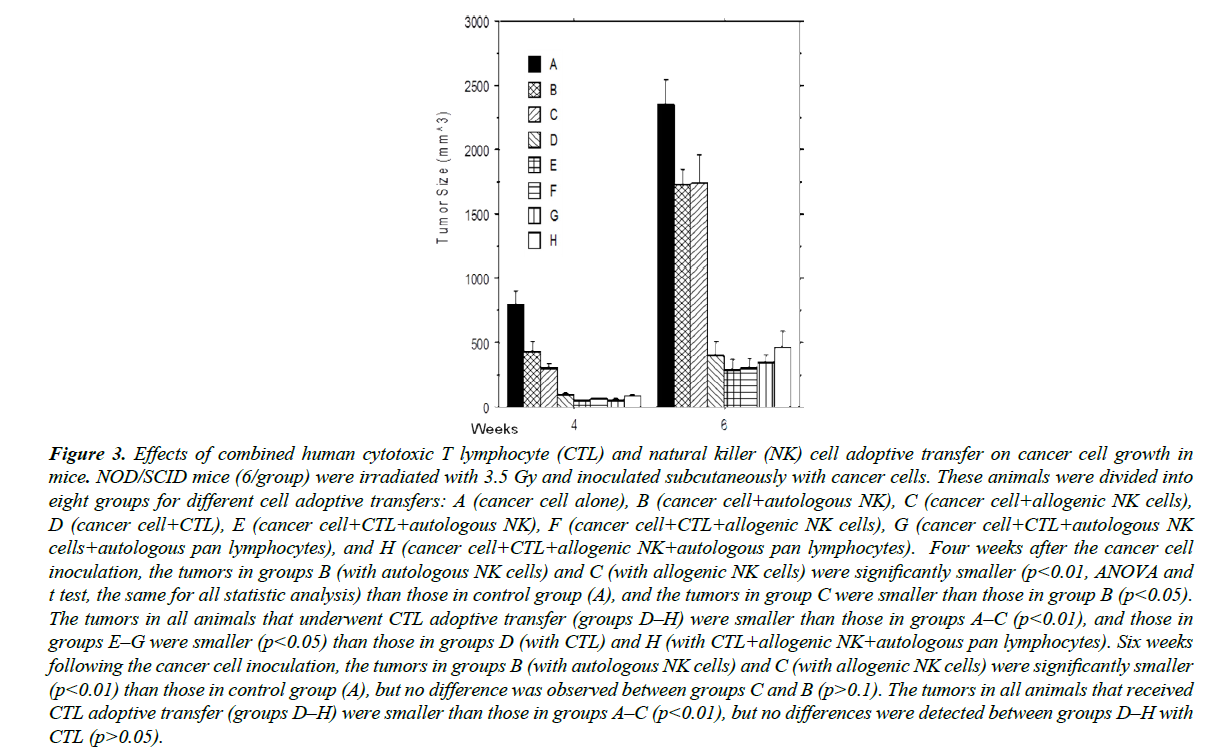 A marked decrease in expression of MHC class I antigens was found in many cancer cells and cancer cell lines, with which the existence of a relevant mechanism for evading the host immune response to the tumor was suggested in previous studies [31- 33]. Our data further reveal that the expression of MHC class I antigens shifted under certain conditions, particularly under the immune selection pressure from CTLs or NK cells, in which cancer cells evaded the immune attack of immunocytes. Therefore, the combined application of CTLs and NK cells is more ideal to eliminate cancer cells, as shown in our current study.

Cytotoxicities of CTLs and NK cells

Cytotoxicity assays were conducted to confirm bona fide cytotoxic activities of the CTLs and NK cells used in this study. As shown in Figure 4, all CTLs, allogenic NK cells, and autologous NK cells exhibited potent target cell lytic activity. The cytotoxicity of the CTLs was higher than that of NK cells due to the greater number of MHC class I-positive target cells (>80%). Consistent with other studies [22-24], KIRmismatched allogenic NK cells lysed target cancer cells more efficiently than autologous NK cells, especially at higher E:T ratios. Considering that NK cells are also related to immune rejection [25] in HLA-mismatched organ transplantation, these data support that allogenic NK cells are also toxic to recipients’ cells that express the MHC class I antigen at the normal level.

In this study, the ZYX Bioreactor was used for cell expansion and cellular biologic reactions. The ZYX Bioreactor is an automatic cell expansion system with significant advantages that permit elegant and precise cell culture-based experimental procedures [13,17,34]. (1) The bioreactor’s kinetic and static alternating culture programs allow cells to receive adequate metabolic support but minimal media flow shear-stress, permitting faster growth than conventional static cultures. (2) The bioreactor is configured to conduct cell culture and cell sorting in the same cell culture chamber. (3) The bioreactor can be programmed to maintain adequate contact among cells, critical for cytotoxicity tests with CTL and NK cells. (4) Sensitive instrumentation automatically determines peak cell harvest time during cell expansion. There also exists a live tissue-mimicking function (the gradient osmosis perfusion system); however, this function was not utilized here. Therefore, the data from the animal experiments of this study necessarily provided a solid support to conclusion obtained from ex vivo cell culture.

Our results indicated significant modulation in expression of MHC class I in many cancer cells and cancer cell lines in response to co-culture with immune effectors as well as the existence of a potential mechanism for evading the host immune response as suggested by previous studies [31-33]. The data further reveal that the expression of MHC class I antigens modulated under certain conditions, particularly under the stress of CTL or NK cell attack, leading to cancer cell immune evasion and proliferation of resistant cells. Therefore, the combined application of CTLs and NK cells is more ideal to eliminate cancer cells, as shown in our current study.

We also found significant evidence that the mechanism by which tumor cells modulate surface MHC expression in response to cytolytic attack is an active process. This apparent ability of cancer cells to adapt in response to selection pressure from immunocyte effectors could be an important mechanism by which cancer cells evade immune surveillance and a critical reason for failures of previous anticancer cell therapies. When we co-cultured cancer cells with cancer-specific CTLs and NK cells together, the number of remaining cancer cells was significantly reduced in comparison to co-cultures with CTLs or co-cultures with NK cells alone. These data suggest that applying both effector cell types in tandem could have significantly enhanced antitumor effects.