Medical devices and implants are fabricated in many conventional techniques, but due to advancements in implant manufacturing industry, Additive Manufacturing (AM) takes a wide platform in fabricating these devices with good mechanical property, dimensional stability and customised according to the patient data with variety of biomaterials. Polyamide is a notable biomaterial in fabricating medical devices, dental screws and implants using AM technique. In this study, Hydroxyapatite (HA) powder was coated over Additive Manufactured polyamide substrate and its biocompatibility in terms of cell proliferation and viability were analysed. Physical Vapor Deposition (PVD) with Electron Beam (EB) source was used to deposit HA powder over the polyamide surface. SEM with EDX was used to characterize the microstructure and the chemical composition of the deposited layer. The crystallinity of layer was confirmed using XRD analysis. 3T3 fibroblast cells were seeded over the coated substrate up to 15 days and the cell proliferation and viability were studied. From the result, it was evident that the HA layer was successfully deposited over the AM polyamide surface and the cells displayed good proliferation and viability on the coated substrate. Hence, the AM polyamide substrate has a better biocompatibility which improves bone-tissue integration.

Additive Manufacturing (AM) is a fast growing technology in which parts are fabricated directly from the CAD model. As per ASTM F 2792-12a, AM is defined as “Process of joining materials to make objects from 3D model data, usually layer upon layer as opposed to subtractive manufacturing methodologies, such as traditional machining. AM has a right set of circumstances to fabricate complex structured and custom-fit implants, prostheses and medical devices according to patient data obtained from CT/MRI using wide range of biomaterials without any tooling and molding [1]. One of the most evidence of implant failures are mainly ascribed to incomplete osseointegration, stress shielding due to significant differences in mechanical properties between implant and surrounding bone, these problems were effortlessly overcome with AM technique by replicating volume and contour of both hard and soft tissue [2]. Metallic and metallic alloys implants were very popular in replacing the bone. However, it was well known that these materials were prone to corrode in the body fluid environment and lead to fatigue failure which ultimately causes to loosening of the implants [3]. Currently, implant industries were marching towards the newer biomaterial which hinders the difficulties faced by metallic implants and opt for biopolymers. Among various biopolymers, polyamide was one of the preferred candidate to produce medical devices, dental screws sutures and cancellous bone implants by virtue of its biostability, good mechanical property and broad temperature tolerance as other biomaterials [4].

Hydroxyapatite (HA), a bioceramic was commonly applied to implant as a coating material because of its chemical and crystallographic similarities as human bone. This coating will improve the cell adhesion, osseointegration and tissue fixation of implants, whereas the poor mechanical properties of bulk HA materials cannot be used as implant to replace large bony defect or load-bearing applications, hence this material was generally used to create thin biofilm over the implant which combines the mechanical performance of implant material and bioactivity of HA. There are plenty of techniques to deposit HA including plasma spray, Magnetron sputtering, sol-gelmethod, electrodeposition, biomimetic deposition [5] but each technique has its own limitations. Among that Physical Vapor Deposition (PVD) with Electron Beam (e-beam) source shows a stable deposition which has high density coating and good bond strength. The present study aims to investigate the biocompatibility of HA coated Additive Manufactured polyamide substrate. PVD with e-beam source was employed to deposit HA. The surface was characterized using various techniques and biocompatibility was evaluated by culturing 3T3 fibroblast cells.

The substrate was fabricated using Selective Laser Sintering (SLS) an AM technique shown in the Fig 1. A 3D CAD model was generated and the data was sliced into layers. The model is loaded on to SLS machine and a computer directed CO2 laser sinters layers of polyamide powder together. 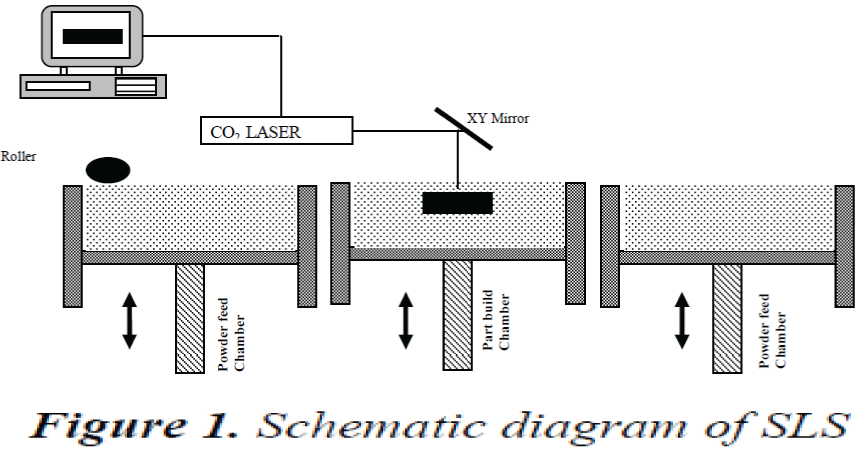 After each solidification layer, another layer of powder was deposited and again sintering will take place until the part was completed. [6, 7]

HA powder was prepared by wet chemical precipitation method. Calcium hydroxide and Ammonium phosphate (Dibasic) powder was taken as a precursor and precipitate was obtained. Then it was kept in the furnace to get dried to obtain HA powder [8]. The prepared HA powder was made into pellets with high pressure hydraulic press with 400 MPa load and sintered at 800°C for 5 hours. The pallets were made free from the moisture and contaminates. Then the substrate was ultrasonically cleaned using acetone and ethyl alcohol. For coating, ebeam deposition Physical Vapour Deposition (PVD) (HIND HIGH VACCUM, INDIA) was used. At the early stage of deposition, the substrate was preheated to a temperature of 50°C by means of e-beam with a 40 mA current. Ar+ ion beam was used to clean the substrate for the period of 10 mins, then chamber was evacuated to 5x10-2 torr. The high vacuum was attained at the range of 10-7 to 10-6 torr. During the deposition process, an e-beam was generated at operating voltage of 5kV and the substrate was allowed to rotate at a speed of 30 rpm [9].

The cellular response of coating was assessed in terms of cell viability and proliferation to the surface. 3T3 Fibroblast cell were purchased from National Center for Cell Science (NCCS, Pune). This kind of cell are suitable for screening large number of samples for cytotoxic compound and also used in the rapid evaluation of the biomaterial surface qualities.

The coated substrate was sterilized with 70% ethanol for 30 min and then further it was autoclaved for 30 min, followed by drying at room temperature for 2 hrs. The cells were seeded approximately 1×105 cells/sample. The cell proliferation and viability was assessed and observed at specific time period of 1st, 7th, and 15th day respectively. For comparison purpose, uncoated substrate was also subjected for cell seeding.

The viability of cells was assessed by standard MTT (3- (4,5-dimethylthiazol-2-yl)-2,5-diphenyltetrazolium bromide) assay [10]. This assay is based on the reduction of soluble yellow tetrazolium salt to insoluble purple formazan crystals by metabolically active cells. Only live cells are able to take up the tetrazolium salt. The enzyme (mitochondrial dehydrogenase) present in the mitochondria of the live cells is able to convert internalized tetrazolium salt to formazan crystals, which are purple in colour. Then the cells were dissolved in DMSO solution. The colour developed is then determined in an ELISA reader at 570 nm. After each experiment, the samples were processed for fluorescent microscope. The cells were stained with 2 μg ml-1 fluorescein diacetate (FDA) (1 mg/ml, Molecular Probes) and microscopic examination was carried out where the live cell will be in fluorescent green.

It was evident from Fig 2 (a) the deposited layer was dense and uniform. Some isolated particles were identified on the layer from Fig 2 (b), this may due to agglomeration of smaller particles. This kind of particle agglomerations will increase the surface roughness and helps in improving osseointegration. Further the examination revealed that the coating of the surface was free from defects like cracks, pores and larger voids. 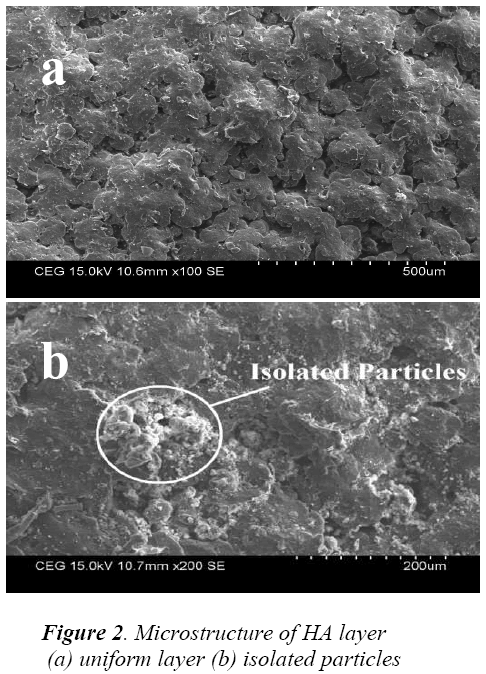 Fig 3 shows the EDX spectra of the layer which consists of the characteristic peaks of calcium, phosphate and oxygen elements, which confirms that the layer was Hydroxyapatite. The ratio of calcium and phosphate was approximately 1.68, which is close to that of standard HA. These elements are main constitutes of hard tissue, teeth and tendons. The average surface roughness (Ra) of deposited layer was 3.41 μm measured using stylus probe technique. Many literatures demonstrated that, having rough surface will stimulate better osseointegration [11,12].

The XRD diffraction pattern of HA layer was shown in Fig 4, it confirms that the formation of HA with sharp diffraction at 2θ value of 25.9° and 32.62°. 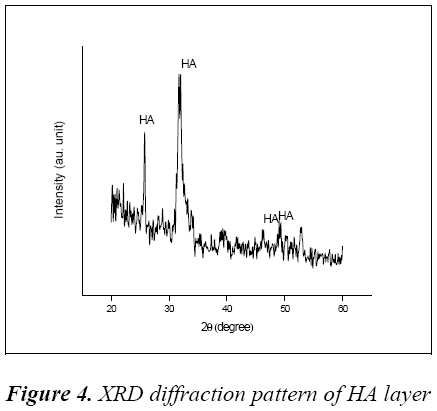 Some amorphous peaks were also absorbed at 46.58° and 49.34° corresponds to the relative intensity of diffraction of standard data (ICSD 087727).

The major peaks and some shoulder peaks of layer shows a mixture of amorphous and crystalline structure of Hydroxyapatite, this mixture formation reveals that coating was carried out at low substrate temperature. Better bone-tissue integration and osseointegration will be achieved due to this phase mixture in layer [13]

The in vitro analysis of HA coated substrate was carried out by measuring the viable cells seeded on the substrate after particular time interval 1st, 7th and 15th day. Fig 5 shows that the cells can grow more effectively on the coated sample compared to that of uncoated sample. From the 1st day observation, the cell growth on coated and uncoated sample was almost similar, because the cellsubstrate interaction was slow. 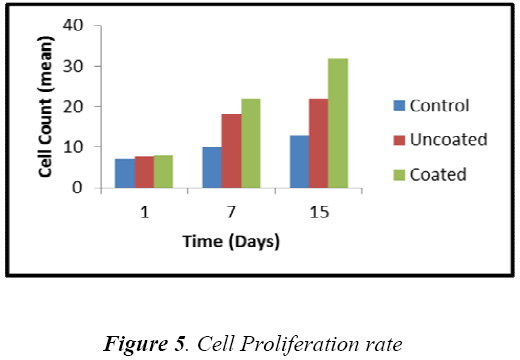 Hydroxyapatite layer was successfully deposited on the polyamide substrate by EB-PVD. The deposited layer was uniform and free from voids and pores, some particles were agglomerated with each other and form an isolated particle. It was believed that this isolated particle will increase surface roughness of the layer and promote osseointegration. Also, the Ca/P ratio of the layer was 1.68 which was close to that of standard Hydroxyapatite.

The diffraction pattern reveals that the layer was crystalline and some amorphous was identified due to low temperature deposition and no post sintering of layer. in vitro test reveals the biocompatibility nature of deposited layer. Initially the results show slow proliferation and it was increased gradually according to the time, the increase in proliferation is due to release of Ca2+ ions, layer surface roughness and crystallinity. Finally, it was concluded that EB-PVD was a promising technique to deposit Hydroxyapatite powder over Additive Manufactured polyamide substrate. It was more effective in improving the cell proliferation and has potential application in bone tissue engineering.

The Work described in this paper was supported by Fellowship (Anna Centenary Research Fellowship) from the Center for Research, Anna University, Chennai-25, the financial contribution is gratefully acknowledged.