Influence of Experimental Diabetes Mellitus on Secretary Granules in ß-Cells in the Dog Pancreatic Islet. II. Relationship between the Spherical Granule and the Cored Vesicle

A category of the spherical granules contains two types of granules such as a filled granule and a cored vesicle. The spherical granules were counted to separate the filled granule and the cored vesicle. Ten mixed-breed dogs were separated into two groups. One was the control group, and the other was experimental DM using Streptozotocin at sub cutaneous. The experimental animals were selected if their blood glucose concentrations were over 300mg/dl.The obtained pancreases were then prepared for transmission electron microscope. To distinguish the granules, serial sections were employed. Each type of granule was counted and analyzed statistically by the Student t-test. The β -cells of the dog pancreatic islets displayed many rod-shaped secretory granules with a few that were spherical and cored vesicles. These granules were mainly located around a well developed Golgi apparatus. Whereas the granules extrusion of the cord vesicle were often observed, the extrusion of the rod-shaped granule were observed few. No extrusion of the spherical granule were observed. The granules classified as rod-shaped, spherical, and cored vesicle were counted. Mean values of the number of granules in the β -cells were counted in 50 cells in each animal. The granule number in the experimental animals was decreased. The ratio of rod-shaped granule between the control and DM dogs was approximately 6.6:1 and of the cored vesicle was 8.1:1. The ratio of both the rod-shaped and cored vesicle between the control and DM dogs was similar. Then the functional differentiation of two types of spherical granules was discussed.

As the procedures of this experiment were described in our previous paper [2] detailed procedures should be referred to the paper. Ten mixed-breed dogs weighing 1.5 to 2.0 kg were separated into two groups. One was the control group, and the other was experimental DM using Streptozotocin [2-deoxy-2-(methyl-3-nitosoureido)-D-gluco pyranose]; 35mg/Kg of dog] at subcutaneous [3]. After the injection blood glucose was checked on day 14. The experimental animals were selected if their blood glucose concentrations were over 300mg/dl. All animals were treated according to “The Guidelines for Animal Experimentation” of the Experimental Animal Science Center of the Nagoya City University and were sacrificed under deep anesthetized with Nembutal (pentobarbital, Abbot Lab., North Chicago, IL, U.S.A.).

The obtained pancreases were fixed to perfuse the fixative (0.05 M cacodylate buffered 2.5% glutaraldehyde, pH 7.2) via the aorta for 30 min for electron microscopic analysis [4]. The tissues were then prepared for transmission electron microscope (TEM).

To distinguish between the peroxisome-like granule, spherical granules or tangential sections of the rod-shaped granules, serial sections were employed. Each set of data consisted of six electron microscopic specimens. To confirm the granule type, each granule was identified using the serial sections and counted. The data obtained were then analyzed statistically by the Student t-test.

The β-cells of the dog pancreatic islets displayed many rod-shaped secretory granules with a few that were spherical and cored vesicle, so identification of the cell was not difficult (Fig. 1). These granules were mainly located around a well developed Golgi apparatus. Around the Golgi apparatus, the cored vesicle, and spherical granules were also found (Fig.1, inset a). Whereas The granules extrusion of the cord vesicle were often observed (Fig. 1a, inset b), the direct granule extrusion of the rod-shaped granule were observed few (Fig. 1, inset c). No granule extrusion of the spherical granule which was shown in inset d of Fig. 1 was observed. The β-granules in the pancreas of the control dogs showed high electron density. They were, however, less dense and fewer in the DM animals (Fig. 2). A few oval mitochondria were also scattered in the cytoplasm (Figs. 1, 2 and 3). 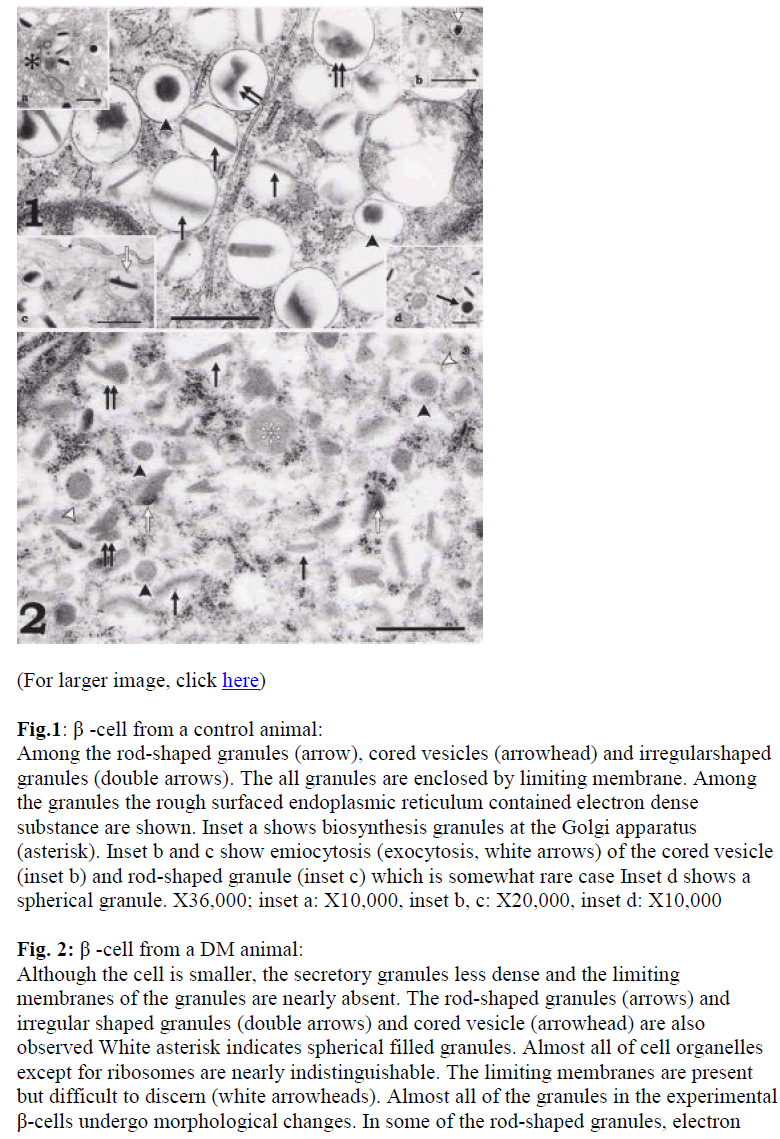 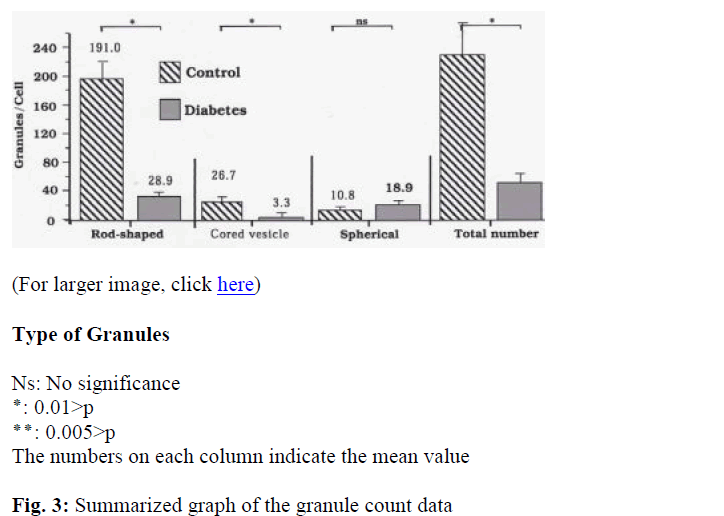 †: Irregular type granule and hollow vesicle are included into rod-shaped granule.
Table 1: Number of Granules in the β-Cells of Pancreatic Islet in Experimental DM Dog (Count at 50 β-Cells in each animal)

Lacy [9], Howell et al [10], Misugi et al [11], Watari [12, 13] and Fujita et al [14] reported on the β-cells of the pancreatic islets of various animals. Watari [13] observed these granules in detail using an ultra-high voltage electron microscope, and classified them into 10 types. He reported that the three-dimensional structure of the granules in the snake contains hexagonal crystalline cores shaped like a rhombic dodecahedron. It is generally known that the snake pancreatic β-cell contains conspicuous rod-shaped granules [13,14] which often show a crystalline structure. In general, crystalline structures have a certain hexagonal [15] or rectangular profile [16] or are rod shaped. In present study the rod-shaped granules containned in the dog β-cell showed a crystalloid structure which was interpreted as representing stability and purity of the molecule. It was believed that the crystals were a storage form of a certain protein [15] such as proinsulin in the dog, snake or human.

In conclusion, from morphological data it is strongly suggested that Streptozotocin mainly acts on the pathway from preproinsulin to proinsulin.