Lyell’s syndrome or toxic epidermal necrolysis is a dermatological disease with severe evolution, and cutaneous-mucosal lesions involving more than 30% of body surface area. The following are the most commonly involved in triggering TEN: antibiotics, anti-inflammatory drugs, chemotherapeutic agents, antivirals, and anticonvulsants drugs. The evolution is accompanied by local complications (superinfections, vicious scars), or general complications (sepsis, multiple organ failure). We present the case of a patient with infectious-induced Lyell’s syndrome associated with exposure to two classes of drugs at risk of inducing Lyell’s syndrome (antibiotics and nonsteroidal anti-inflammatory drugs). Supportive therapy, associated with the treatment of cutaneous mucosal lesions, and the treatment of sepsis, were the most important elements that led to a favourable evolution of our case.

Lyell’s syndrome or toxic epidermal necrolysis (TEN) is a severe dermatological condition, in which cutaneous mucosal lesions are rapidly extending, can evolve into multiple, serious complications, sometimes even leading to death. Unlike Stevens-Johnson syndrome in which targetoid lesions do not exceed 10% of the body surface area, over 30% of the skin surface is affected in TEN. The most common etiological factors in TEN are the drugs. Other triggers recognized in TEN are infections, immunizations or immunosuppressive conditions induced by organ transplantation [1]. Up to now, more than 220 drugs have been described [2,3] as being associated with Lyell’s syndrome, the most common being antibiotics (sulfonamides, macrolides, penicillins, quinolones) [1], chemotherapeutic agents, antimalarial drugs [4], antiinflammatory drugs, anticonvulsants and antiretroviral drugs.

The appearance of late-onset manifestations, 1-3 weeks after exposure to the triggering factor, is explained by the fact that in TEN, the pathogenic mechanism mimics a delayed hypersensitivity reaction at antigen primary exposure [2], but with extremely rapid and aggressive reaction at subsequent exposure. Immunopathological changes incriminated in the pathogenetic mechanism of the disease involve activation of the Fas-FasL pathway with keratinocyte apoptosis [5], activation of the perforin-granzyme pathway by cytotoxic T lymphocyte [6], excess release of proinflammatory cytokines (IL, TNF, INF), and the excess synthesis of granulysin by the T lymphocyte and NK cells [7,8].

This entire immunological cascade results in apoptosis and keratinocyte necrosis and secondary dermo-epidermal cleavage. At the cutaneous level, the eruption is initially localized to the cephalic extremity, but it generalizes quite quickly, consisting of targetoid erythematous-papular elements “en cocarde” with the tendency to confluence in plaques and pustules, sometimes with vesicles and bubbles on the surface. The Nicolsky’s sign (dermo-epidermal cleavage upon the friction in the periphery of the lesion) is positive, expressing the fact that the disease is active, in evolution. In the mucous membranes, hyperemia, erosions and ulcerations occur, which are covered by hematic crusts, which, depending on the location, can cause dysphagia, visual disturbances, dysuria, or dyspnoea.

The therapeutic intervention in time reduces the risk of developing complications (superinfections of cutaneous mucosal lesions, retractile vicious scars, pneumonia, renal insufficiency, blindness, sepsis etc.) that may be lifethreatening. Because of the large body surface area affected (over 30% of the skin surface), TEN treatment requires surveillance in intensive care or burn wards. Particular attention is paid to skin and mucosal care by using neutral solutions for dressing and emollient creams, and antibiotics for ulcerations to prevent superinfections. In parallel, hydro electrolytic and volume rebalancing is performed, as well as albumin administration, antibiotic therapy mainly antistaphylococcal and analgesic drugs administration. To reduce mortality, good interdisciplinary collaboration (dermatologistinfection diseases specialist-ophthalmologist-urologistintensive care specialist) is needed. Administration of systemic corticotherapy is questionable, and is currently a controversial topic. Other therapeutic measures that can reduce mortality in TEN include plasmapheresis, monoclonal antibody to TNFalpha, and intravenous immunoglobulins. The mortality rate varies with age, comorbidity and the extent of skin lesions (which may range from 30% to 70%).

At the level of the semimucosa of the lips and the oral mucosa, there were extensive ulcerations covered by hematic crusts and fibrinous-purulent fetid secretions, being impossible to feed himself. At ocular level, one can see conjunctival hyperaemia, purulent conjunctival secretions, palpebral edema with narrowing of the palpebral opening. At the level of the left toe, periungually, he shows erythema and painful edema, secondary to the slight enclavation of the nail at this level (Figure 1). 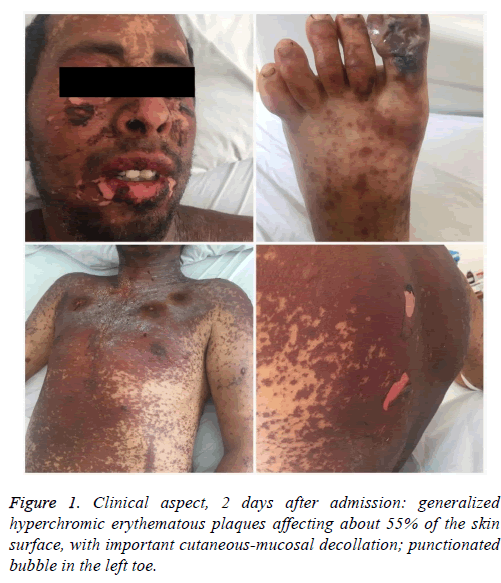 Associated, he presented submandibular adenopathies of about 2 cm, painful on examination. The patient was tachycardic, a heart rate of 120 beats per minute with a systolic murmur in the mitral and aortic focal area, a blood presaure of 90/50 mmHg, hepatomegaly of 1.5 cm, and without signs of meningeal irritation. Initially, laboratory investigations revealed mild leukocytosis, thrombocytopenia, inflammatory syndrome, and mild hyperglycemia. Serology for HIV, syphilis, hepatitis B and C, and haemocultures were negative. Bacteriological examinations from the left toe periungual secretion were positive for Staphylococcus aureus, CA-MRSA (sensitive to Gentamicin, Ciprofloxacin, Rifampin, Chloramphenicol, Linezolid, Cotrimoxazole) and E .coli sensitive to Aztreonam, Imipenem, Meropenem, Ceftazidime, Cefotaxime. The laboratory examinations are presented in Table 1. The completion of investigations with procalcitonin dosage confirmed the evolution to TEN complications with sepsis, the patient being transferred into the Infectious Diseases Clinic.

Table 1. Evolution of the main laboratory examinations during hospitalization.

The examination in the ear, nose and throat sphere showed moderate edema of lutea, free vocal cords without laryngeal edema. The ophthalmic examination revealed central corneal erosion of the left eye. Systemic treatment included hydroelectrolytic rebalancing, pulse corticotherapy (500 mg Metilprednisolone/day) for 3 days, proton pump inhibitors, antibiotherapy (Clindamycin 1800 mg/day with Gentamicin 240 mg/day, then Meropenem 4g/day plus Linezolid 2 × 600 mg/day), and antifungal therapy (Fluconazole 150 mg/day). Cutaneous mucosal ulceration was washed with saline and Kanamycin ointment was applied to mucosal ulcers and Dermazin to cutaneous lesions. The morbiliform lesions were treated with medium-potency dermatocorticoids (hydrocortisone butyrate). At ocular level, physiological saline dressing was performed, and corneal epithelization ointment (Corneogen) was applied. After obtaining the control of the sepsis, the patient was transferred to the burn ward for the reepithelialization of the extensive palmar plantar ulceration. The topical therapies with epithelization ointments and the removal of the palmar plantar affected skin allowed for rapid, healing of the remaining ulcerations without sequela (Figure 2). 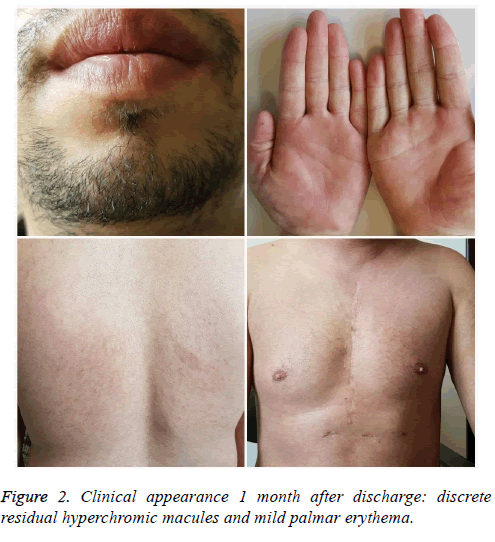 TEN is a dermatological emergency, with post-drug etiology in 80-95% of cases [9]. The occurrence of drug hypersensitivity is greater in certain circumstances: the association of antibiotics in patients with cystic fibrosis, of cotrimoxazole in patients with HIV infection receiving abacavir treatment. Genetic determinism cases are described, such as in the Asian population, HLA-B *1502 (+) genes, posing a risk of severe allergic reactions to carbamazepim while HLA-B *5801 (+) increases TEN risk to allopurinol administration [10,11].

The occurrence of TEN is associated in most cases with the administration of antibiotics (most commonly being sulfonamides), non-steroidal or steroidal anti-inflammatory drugs, methotrexate, allopurinol or antiretroviral medication, anticonvulsants, and anxiolytics. The case presented was in treatment with an antibiotic and anti-inflammatory combination, along with the evolution of an infection in the dental sphere but also with periungual nail infection, from which Staphylococcus aureus and E. coli were isolated. Most likely, the trigger was mixed: the periungual infection evolving towards sepsis, under antibiotic treatment inappropriate for the identified etiologies and drug-induced (amoxiline-clavulanate, ibuprofen).

Being a life-threatening disease with high mortality risk (30-70%) [12], it is essential that the disease is properly managed. The use of severity of the illness score for the toxic epidermal of necrolysis (SCORTEN) is important in assessing the severity of the disease. In our case, the items in the SCORTEN calculation (Table 2) showed a value of 3, indicating a 35% mortality risk.

High dose methylprednisolone has been shown to be effective, even if the benefits are confirmed in some retrospective studies [13], and refuted in others [14]. In parallel, we combined the antibiotic therapy appropriate to isolated bacteria, avoiding the medication at risk of cross-reactions of hypersensitivity. Intravenous immunoglobulins, plasmapheresis or biological agents (infliximab), cyclophosphamide, cyclosporine, pentoxifylline or N-acetylcysteine, considered as third-line agents in the treatment of TEN [15], were not required.

Supportive therapy, associated with the treatment of cutaneous mucosal lesions, the treatment of sepsis, were the most important elements that led to healing. The particularity of the case lies in the appearance of the TEN, the triggers being polymicrobial sepsis and medication.

Written informed consent was obtained from the patient for publication of this case report and any accompanying images. The study was accepted by the Ethics Committee of the hospital and they encouraged publishing the article.