Incidence of Supratrochlear foramen of Humerus in North Indian Population

The coronoid and olecranon fossa of humerus are usually separated by a thin translucent plate of bone. In certain bones this plate is sometimes perforated by a foramen, called the supratrochlear foramen (STF) or septal aperture. STF in humerii was first described by Meckel in 1825 [1]. Hardlicka observed that the perforation is more frequent in higher primates other than man [2]. Incidence of STF varies from 6% to 60% in different races [3]. The anatomical knowledge of STF may be beneficial for anthropologists, orthopaedic surgeons and radiologists in day-to-day clinical practice. The present study describes the incidence and different shapes of supratrochlear foramen in the humerii of North Indian population.

A total of 1776 (Right 905, Left-871) dried adult humerii of which 1352 belongs to male and 424 to female of North Indian origin were collected from the osteology lab of the Department of Anatomy, King George’s Medical University, U.P. Lucknow. The observed bones were free from any pathology. The transverse and vertical diameter of the supratrochlear foramen was measured by using digital Vernier calipers. The shape of the foramen was also seen. 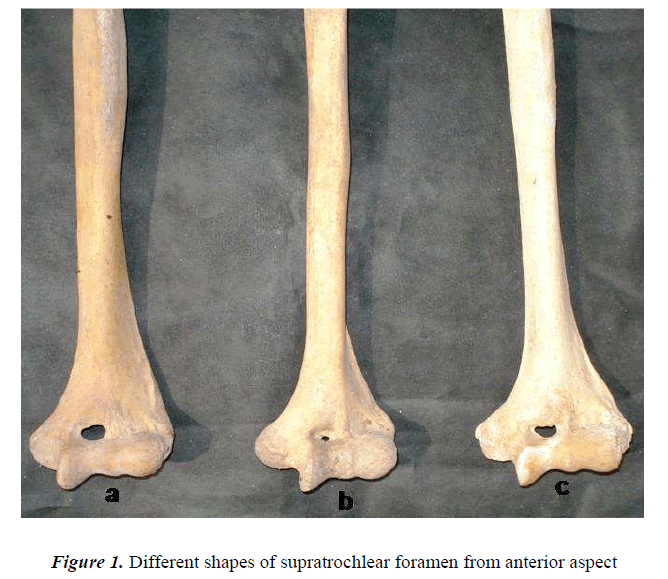 The majority of bones that had no foramen showed translucency of septum (91.13% on right side and 79.39% on left side)), but Singhal et al observed translucent septum in 66% humerii of South Indian origin [3]. In their study the opaque septum was present in 6% bones which is lower as compared to North Indians observed in the present study, i.e 8.86% on right side and 20.60% on left side. Majority of the STF were oval in shape (82.47%) which strengthens the previous reports by Singhal et al and Nayak et al followed by round and triangular shape [3,10].

The higher incidence of the STF in the Indian population requires special attention during intramedullary humeral nailing procedures in the distal portion of humerus. In the present era, intramedullary fixation has become a popular method of treatment, especially in traumatic injuries and pathological fractures due to its advantages. Therefore, The frequency of supratrochlear foramen in our study was found to be higher in females and more common on left side (Table 1). This finding was similar to previous reports of Singh & Singh who also observed that STF was present more in females (38%) than in males (21%) and more frequently on the left side (31%) than on the right side (24%) [5]. Comparative sidedness of STF in different human races shows that in majority of population it is more frequent on left side (Table 4). Mall suggested that the higher occurrence of STF in females may be due to inward curvature of the female elbow angle [4]. According to Hirsh (1927) the thin plate of bone between the olecranon and coronoid fossa is always present until the age of seven years after which the bony septum occasionally becomes absorbed to form the STF [9].

The presence of such foramen should be kept in mind before proceeding for surgical intervention. Prior anatomical knowledge about the presence of STF may check erroneous interpretation of X-rays by radiologists. De Wilde et al opined that STF is an area which is relatively radiolucent, is commonly seen as a type of ‘pseudo- lesion’ in any X-ray of the upper limb, and this can be mistaken for an osteolytic or cystic lesion [11].