The purpose of this study was to assess the incidence, location, and sizes of the accessory mental foramina in Bulgarian population using Cone-Beam Computed Tomography (CBCT). The CBCT records of 1400 Bulgarian patients were evaluated for Accessory Mental Foramina (AMF) by two expert radiologists familiar with CBCT interpretation. Their presence and location in relation to the Mental Foramen (MF) were assessed using axial, panoramic and cross-sectional 2-dimensional CBCT images. The long and short axes diameters of the AMF were also measured. Accessory mental foramina were observed in 3.86% of the patients: up to two foramina on one side, unilaterally presented in 94.4% of cases with AMF. Their location regarding MF was distally and inferiorly in 62.9%. In 35.5 % of cases with AMF the foramen was situated above the level of MF and therefore needs special attention before surgery. The mean inner long and short axis diameters were 1.5 mm (SD: 0.4 mm) and 1.2 mm (SD: 0.3 mm) respectively. The measurements ranged from 0.7-2.5 mm for the long axis and 0.7-2 mm for the short axis. Demonstration of AMF using CBCT can improve the surgery treatment planning in anterior part of the mandible and thus helps to avoid unwanted neurovascular damage and possible malpractice litigations. This is the first study about the incidence, location, and sizes of the accessory mental foramina in Bulgarian population and adds additional information regarding the Caucasian race.

It is important to differentiate Accessory Mental Foramina (AMF) from nutritive vascular canals and fistulas. Supplementary blood vessels or nerves in AMF may be significant for anesthesia procedures and the knowledge about their presence could be used to avoid post-operative complications (hemorrhages and sensory disturbances) during implant installations [2-4].

Today CBCT provides reliable data for correct distance measurements and can be used to obtain detailed information for three-dimensional analysis of the bone structures [7]. It must be emphasized on the fact that unless the diagnostic information provided through CBCT improves treatment results, CBCT should not be recommended for use in children or adolescents [8].

Using CT or CBCT a precise accessory mental foramen analysis is only possible due to the better quality and lower distortion in comparison with conventional radiographs [5].

Clinical and radiographic studies that investigate AMF are less frequent. Small proportion involves CT and CBCT examination and some of them include only case reports or relatively small groups of patients [5,9-11].

The study included 1400 CBCT scans taken in 7 y period as a part of preoperative planning of implant placement. CBCT images were retrospectively evaluated. The group consisted of 700 female and 700 male patients; mean age of 46.7 y (range 18-78). All of them were Bulgarians from Caucasian race. Patients with anamnesis of surgical procedures in the anterior mandible or evidences of any disorders (skeletal asymmetries, traumas etc.) that can influence the normal anatomy related to MF and AMF were excluded from the study. Images with low quality e.g. due to subtle movements during the exposure or with metal artifacts also were excluded.

All patients had given their informed consent for this examination. The study protocol was carried out in accordance with the principles described in the Declaration of Helsinki, including all amendments and revisions. Only the investigators had access to the collected data.

For identification of the AMF and their location, an expert consensus statement (n=two experts radiologists familiar with CBCT interpretation) was used as the gold standard because of the inherent limitations of a clinical observational study.

The x-axis (parallel to the occlusal plane) and y-axis (passing through the MF and perpendicular to the x-axis) were used to define the position of AMF as distal-superior, distal-inferior, medio-superior or medio-inferior.

Axial, panoramic and cross-sectional images were carefully examined manually using the thinnest possible slices-0.3 mm. Panoramic image of each patient was reformatted using manually driven arch curve located between the buccal and lingual compact layers of the mandible. The MF and AMF were identified initially in axial plan (on full screen) and confirmed using the panoramic and cross-sectional images. In case of need the radiologists were free to use other slice thickness or different slice sequence to be sure about MF and AMF presence.

The long and short axis internal diameters of the AMF were measured three times in different days by one observer experienced in measurements on CBCT images. The average values of the measurements were used for the analysis (Figure 1). 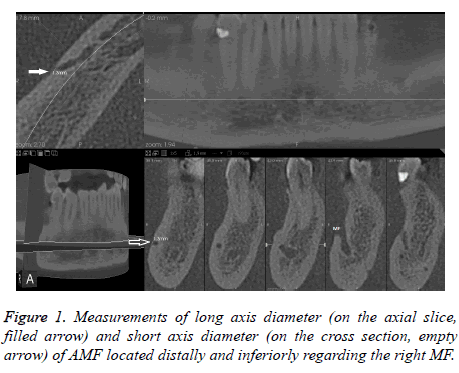 Prior to the actual observations, an interexaminer calibration had been performed. A blinded pilot study of 13 dry human mandibles was done (n=26 hemimandibles). They were scanned with the same CBCT unit and exposure data and the images were analysed for presence of AMF from the two observers. On the crossectional images one AMF was found. The same foramen was subsequently found on the dry mandibles set inspection.

All data were gathered and statistically analysed by SPSS 16.0 (SPSS Inc., Chicago, Illinois, USA). P-values of 0.05 or less were considered statistically significant.

Regarding the measurement of the AMF diameters, the intraobserver variations were expressed by the Coefficients of Variation (CV).

The intraobserver CV for the measurements of the long and short axes diameters yielded very small values (scores of 0.27 and 0.25).

Incidence and number of AMF

In this study the bony canal leading to the AMF originating from the most medial part of the mandibular canal, near to MF and they vary up to two one-sided.

None triple AMF cases in our study were found.

In order to avoid neurosensory disturbances related to AMF, before surgery it is essential to have information about their exact position.

Incidence and number of AMF

To our best knowledge no study has been published concerning accessory mental foramina in Bulgarian population examined by CBCT.

None triple AMF cases in our study were found. Triple AMF (quadruple MF) are extremely rare-incidence of 0.19 % according to Gershenson et al. [19].

Cases with AMF located inferiorly to the mental foramen have lower significance for the planning when it is based on the MF location [5]. Our results are in accordance with several studies founding that the position of AMF was usually inferiorly or distal-inferiorly to the MF-location sufficient for most surgical procedures [20,24,25].

Cases with AMF located above the level of MF are supposed to be more clinically significant because of higher risk for surgical injury during implantation or endodontic surgery [6,11].

Our results shows that approximately 1/3 from Bulgarians have AMF above the MF that could be damaged.

Some authors state that smaller canals with a diameter of less than 1 mm have low probability to cause a major hematoma, but larger canals have to be mentioned in the radiologic reports and considered during the preoperative planning procedures [26-28].

Our data shows that accessory mental foramina bigger than 1 mm represent a large group and a special attention should be paid to this anatomical variant.

The results of this study show 3.86 % occurrence of AMF on all CBCT scans.

No predilection was found concerning the occurrence between both sides and between genders. AMF is unilateral finding in 94.4% of cases with accessory mental foramina. The location of AMF is distal-inferiorly in 62.9% of cases, but in 35.5% the foramen is situated above the MF and this leads to the possibility for injury during apical osteotomy, dental implantation etc.

Accessory mental foramina located above the level of MF (35.5% in our study) needed special attention before surgery in this area. The presence of mandibular and mandibular incisive canals, lingual mandibular canals and MF position are very important too and also should be kept in mind.

This is the first study about the incidence, location, and sizes of the accessory mental foramina in Bulgarian population and adds additional information regarding the Caucasian race.