A fragile site is non-staining gaps and breaks present on the mammalian chromosomes. Fragile X syndrome is the most common form of inherited mental retardation in hu-mans because of unequivocally clinical significance. The expression frequency of folate sensitive fragile site is evaluated in prometaphase \ metaphase chromosomes obtained from peripheral blood lymphocytes from clinically diagnosed mentally retarded patients. The present study shows expression frequency of such breaks in 5.8 % of abnor-mal cell population designated as "rare" fragile site i.e. Xq27, after karyotypic correlation with standard ideogram and to the clinical features, which is slightly higher as reported earlier observations by various laboratories, suggesting that folic acid an essential component required for DNA synthesis lacking either in diet or unknown factors present in the environment.

Chromosomes are liable to form breaks and gaps non-randomly at specific points (loci) in prometaphase or metaphase stage of cell division under specific culture conditions that either inhibit DNA replication or facilitate repair mechanism termed chromosomal "fragile sites". These fragile sites are distributed throughout on the human genome consist of 22 pair of autosomes and sex chromosomes. Recent studies indicate that 103 fragile sites are distributed in all Human chromosomes except chromosome 21 and Y. These are classified as "rare" and "common" groups [1,2] depending upon the frequency present in population and culture conditions. Rare fragile sites are heritable in nature and found on the chromo-somes of less than 5% of individuals associated with men-tal retardation [3], although the incidence varies in two different sexes i.e. about 1:1500 males and 1:2500 fe-males in population [4]. The study of fragile sites have become of increasing interest over the past two decades because of first Cytogenetic curiosity and secondly its use as marker for mental retardation. Therefore, the present study has been designed with the aim to evaluate the frequency of specific chromosome break points associated with mental retardation under folic acid deficient culture condition.

The peripheral heparinized whole blood (W.B) samples (1.0-1.5 ml) were collected mainly from paediatrics hav-ing different age groups (2 month to 8 years) suspected mentally retarded patients (n=15) and short term lymphocyte cultures were setup under sterile conditions. The lymphocytes were grown in complete medium (RPMI–1640) with or without folic acid supplementation (1mg/ml), L-glutamine (0.5 mg/ml), fetal bovine serum (10%), Phytohemagglutinin-M, and antibiotics (100 IU/ ml penicillin,100 microgram streptomycin) for 72 hrs at 37°C. Three cultures were harvested using Colchicine (0.01 mg/ml) as mitotic (inhibitors) arresting agent added to culture 2 h. before harvesting and (0.56%) KCl as hy-potonic solution. Chromosome preparations were made according to routine procedure. Cells were fixed in pre-chilled mixture of acetic acid & methanol (1:3 ratio). Slides were prepared, stained using 5% Giemsa and ana-lyzed using standard protocol [5,6]. At least ten well spread prometaphase or metaphase plates were selected for each data point for the evaluation of structural and numerical chromosomal analysis after karyotyping and compared with using standard karyogram to determine the exact location of chromosom loci. The study further ex-tended to compare such findings (genotype) to the clinical features (phenotype) of the patients for confirmation of diagnosis.

The detail findings of the present Cytogenetic study are well documented in figure 1. The frequency of such chromosomal aberration per cell were 5.8% as observed first time in female patients under folic acid deficient culture condition having normal phenotypes except low I.Q. assessment observed during question of secular trends by the method of Battaglia et.al and Stromm-P in mentally retarted children [7,8]. Folate sensitive chromosome break points are catagroised as rare fragile sites. Molecular basis of folate sensitive fragile sites are dynamic mutations of naturally occurring CGG trinucleotide repetitive sequences and their appearance in cell population depends on the degree of mutation and genetics variation. Although, phenotypic expression of such single gene disorder varies from individual to individual depending on the involvement of CGG trinucleotide repeats i.e. from permutations range (54-200 repeats) have no phenotypic effect, but when size of repeat increases (>200 repeats) which correspond to full mutation range shows abnormal phenotypic expression like moderate to severe mental retardation, facial anomalies, macroordchidism [9]. Another view of this disorder is methylation induced abnormal transcription process, results, expansion of trinucleotide (CGG repeat) gene fail to translate gene product (FMRP), which is a key protein required for synaptic maturation and function of neuranal cell [10,11]. 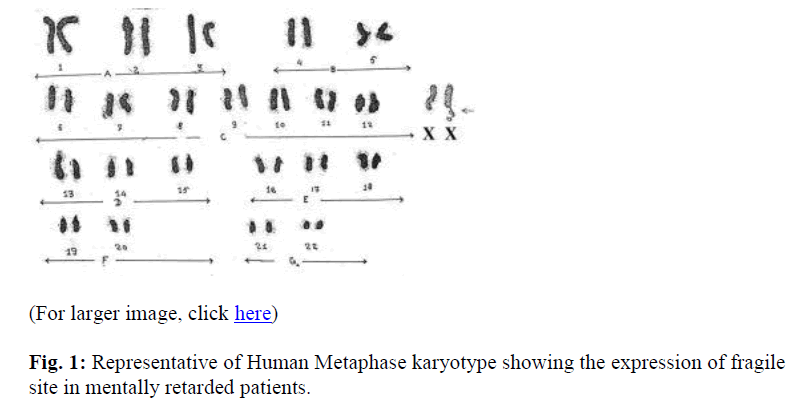 The present study has an important implications on the assessment of potential risk in folic acid deficient diet in female population associated with mental retardation, although the mode of inheritances (carriers) have not been well documented in literature. Therefore it can be concluded from the present study that such type of genetic disorder with specific chromosome break point which arises under folic acid deficient culture condition in female population associated with mental retardation classified as rare fragile site i.e. Xq27 (Figs. 1) in Nepalese population which shows a little higher frequency i.e >5 than what is reported earlier in the literature. However, the frequency of such disorder varies from 1-5 % perhaps due to different Cytogenetic laboratories culture condition [12,13]. In the present study authors have another view also for such significant finding that this disorder may arises in cell either due to folic acid deficiency in diet because it acts as co-factor for conversion of uridine monophosphate to thymidine, an essential component of DNA synthesis during cellular proliferation and further differentiation, or unknown factors present in environment. These break points may be considered as "rare fragile sites" and having tendency of heritable in nature either from an individual or kindred suggesting the path of Mendelian codominant fashion. However, further study is required to collect more data to make large sample size with respect to different sex \ age group to explore the mechanism of such disorder in Nepalese population.