In vitro inhibitory effects of lentinan on rat glioma cells.

This study aimed to evaluate the inhibitory effect of lentinan on the growth of rat C6 glioma cells in vitro. After C6 cells were treated with lentinan for 24, 48 and 72 h respectively, cell activity was detected using MTT assay. After the cells were conducted Annexin V/PI double staining or PI single staining, apoptosis and cell cycle were detected by a flow cytometry. The activities of C6 cells were significantly inhibited (P<0.01) by 20, 40 and 80 mg/L lentinan dose- and time-dependently. Meanwhile, 40 and 80 mg/L lentinan significantly increased apoptotic rate (P<0.01), significantly blocked cell cycle, increased the proportion of cells in G0/G1 phase (P<0.05), and reduced the proportion of S-phase cells (P<0.01). Lentinan can significantly inhibit the growth of rat glioma cells cultured in vitro, induce apoptosis and block cell cycle.

Neuroglioma, referred to as glioma, is a kind of tumor occurring in neuroderm. Most gliomas have slow onset, and often take several weeks or months, several years in a few cases, from the onset of symptoms to hospital visit. The medical history is relatively short for gliomas with high degree of malignancy and those located in posterior cranial fossa, and relatively long for benign gliomas and those in static zone [1]. If a glioma has bled or undergone cystic changes, the symptoms will be suddenly aggravated, or even with a similar process to the incidence of cerebrovascular diseases. The clinical symptoms of glioma can be divided into the following two aspects: first, increased intracranial pressure, such as headache, vomiting, vision loss, diplopia and mental symptoms, etc.; second, focal symptoms resulting from tumor oppression, invasion and destruction of brain tissue, which are manifested as irritations in the early stage like localied epilepsy and neurological function deficits (e.g. paralysis) in the late stage [2,3]. Glioma is the most common primary brain tumor, but the treatment is troublesome and the prognosis is poor due to invasive growth [4]. For malignant glioma in particular, its 2-year survival rate is only 8%. It has been confirmed that the vascular density of glioma, which has rich blood vessels, is positively correlated with the malignant degree and prognosis. This is the therapeutic approach for antiangiogenesis [5].

Lentinus edodes contains more than ten kinds of amino acids, of which isoleucine, lysine, phenylalanine, methionine, threonine and valine are essential amino acids, as well as vitamins D, B1, B2, mineral salts and crude fiber, etc. [6]. Most of the carbohydrates in Lentinus edodes are hemicellulose, the main ingredients of which are mannitol, trehalose, lentnus edodes mycelia polysacharide, glucose, pentosan, and methyl pentosan, etc. Lentinan, which is an effective active ingredient extracted from the fruiting bodies of high-quality Lentinus edodes, can adjust T-cell activity with immune function in human body, and reduce the ability of methylcholanthrene in inducing tumors [7]. Lentinan has a strong inhibitory effect on cancer cells, with inhibition rates of 97.5% for mouse sarcoma 180 and 80% for Ehrlich carcinoma. According lentinan has no direct effect on killing tumor cells in vivo, it can enhance the body's immune function to display anti-tumor activity [8]. Branched β-(1-3)-Dglucan is the active ingredient of lentinan, the main chain of which consists of glucosyl groups linked by β-(1-3)-, and β-(1-6)-linked glucose groups are distributed randomly along the main chain, with a comb-like structure. Studies have shown that the active polysaccharide--β-(1-3)-D-glucan in Lentinus edodes can effectively inhibit heterologous, homologous and even hereditary tumors [9]. Moreover, lentinan has anti-virus and anti-tumor activities, thus adjusting immune function and stimulating the formation of interferon and many other functions [10].

On the basis of preliminary studies, this study evaluated the inhibitory effect of lentinan on the growth of glioma cells in vitro for the first time, and preliminarily assessed its effect on inducing apoptosis and blocking cell cycle.

Five rats were used for amplification of glioma cells. The C6 glioma cell line was first expanded to 1×105/mL, and then was inoculated in the armpits and groins of the 5 rats respectively. After 7 d for tumor formation, the rats were killed by cervical vertebra dislocation to remove the tumors which were carefully removed necrotic tissues and blood clots, mixed with 0.9% sodium chloride solution and prepared into tissue suspension for inoculation. During operation, tumor blocks grinding should be gentle and fine so as to reduce the destruction to tumor cells.

Another 40 rats were injected intraperitoneally with 5% chloral hydrate (200 mg/kg), anesthetized and then fixed on stereotaxic apparatus. The hair near the anterior fontanelle was shaved, with routine disinfection. A hole was drilled with a dental drill 3-5 mm next to the right sagittal suture, with the diameter of 1.5 mm. A microsyringe was vertically inserted into the site 3-5 mm under the cerebral dura mater, and 100 μl of tissue suspension was slowly injected into the right caudate nucleus of the rat, with the injection time longer than 3 min. After the syringe needle was drawn, the bone hole was sealed with bone wax, and the skin was disinfected and sutured [11].

The head Gd-DTPA enhanced MRI examination was performed on the 21th day after C6 cells implantation to observe the changes in tumor size. The rat was fixed by a head holder to determine the maximum tumor plane in coronal scan according to enhanced images and to measure the maximum length (L) and width (W) of the tumor, as well as the maximum tumor plane in sagittal scan and height (H). According to these indices, the tumor inhibition rate was calculated.

The rats were killed on the 21th day after treatment. The tumor tissues were removed and made into 5 μm-thick paraffin sections by a conventional protocol. Then immunohistochemical staining was used to detect the morphological changes of glioma cells.

The cells were cultured in DMEM medium (containing 5% fetal bovine serum) which was replaced with fresh medium every 2 days. When the cells had covered the bottom of culture flask, they were digested with 0.25% trypsin. The single-cell suspension was seeded in 96-well culture plate at the concentration of 1×105/L, 50 μl for each well. The following two kinds of wells were designed, i.e. the blank zero well only added medium, without cells and drugs, as well as the control well added cells, solvent and medium, without drugs. All the wells had four replicates. After 12 h of pre-culture, lentinan was added, and the final concentrations were adjusted to 20, 40 and 80 mg/L respectively, and 24 h, 48 h or 72 h after culture, each well was added 30 μl of 1 g/L MTT solution for another 12 h of incubation. Then the liquid in each well was absorbed completely, and 100 μl of DMSO was added into each well and shaken for 20 min to fully dissolve the crystals. The absorbance (A) of each well was measured at 490 nm with a microplate reader. The cell morphology was observed and photographed by an optical inverted microscope 72 h after administration before MTT was added.

The cells were seeded in 50 ml culture flasks, 1×105 per flask. After pre-culture for 1d, lentinan was added, and the final concentrations were adjusted to 20, 40 and 80 mg/L. After another 24 h of culture, the cells were collected and stained with Annexin V/PI according to kit instructions to measure the apoptotic rate by a flow cytometry; or the cells were collected and fixed in 70% glacial acetic acid at -20 °C for 12 h and then stained with PI according to kit instructions to measure the cell cycle by a flow cytometry.

All data were expressed as x±s and analyzed by SPSS 15.0. The data were compared by one-way ANOVA, and P<0.05 was considered statistically significant.

As shown in Figure 1, intracranial tumor in situ was successfully implanted, and conducted intensifying processing by MRI. According to the measurement results on the 21th day after C6 cells culture, all the three lentinan treatment groups experienced inhibited tumor growth, but the control group had tumor increases. Compared with the control group, the inhibition rates of the low-, medium- and high-dose lentinan groups were (32.85 ± 5.12)%, (40.26 ± 4.81)% and (57.13 ± 6.16)% respectively, indicating that lentinan is effective in glioma treatment.

The results of antibody immunohistochemical staining show that the tumor tissues in the lentinan treatment groups were flocculently scattered in brown, while those in the control group grew prosperously. The results confirm that lentinan can inhibit the growth of rat glioma (Figure 2).

Effects of lentinan on the morphology and activity of C6 cells 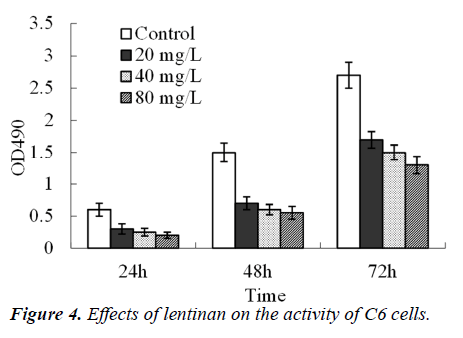 Figure 4: Effects of lentinan on the activity of C6 cells.

Effects of lentinan on the apoptosis of C6 cells

Figure 5: Effects of lentinan on the apoptosis of C6 cells. 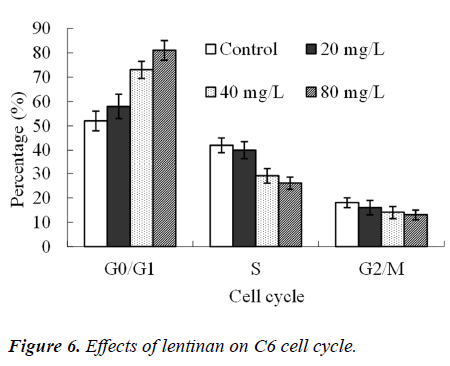 In this study, 20, 40 and 80 mg/L lentinan significantly inhibited the growth of rat C6 glioma cells in vitro, of which 40 and 80 mg/L lentinan induced apoptosis, blocked cell cycle, markedly increased the proportion of cells in G0/G1 phase, and significantly lowered the proportion of S-phase cells. Although many literatures have reported the cytotoxic effect of lentinan on tumor cells in vitro [12], it is the first time for this study to report its effect on nerve tumors.

Lentinan can induce cell cycle arrest in G0/G1 phase and apoptosis, and the doses of its induction of apoptosis are also consistent with those reported previously [13]. However, it has also been reported that lentinan needs a relatively high dose in inducing the apoptosis of MCF-7 pancreatic cancer cells, and significant apoptotic rate was increased and typical nuclear morphological changes took place with the action of 80 mg/L lentinan for 72 h [14]. In contrast, this study showed that the apoptotic rate was markedly increased with the action of 40 mg/L lentinan for 24 h. Accordingly, there may be three reasons. First, the tumor cells have different types, leading to inconsistent drug effect. Second, the drugs are not exactly the same. Third, the methods for apoptosis detection are different. PI single dye-labeled DNA was used to detect apoptosis in the literatures, while Annexin V-PI double labeling was utilized in this study [15]. For the former, the principle of apoptosis detection is that DNA in apoptotic nuclei can form apoptotic bodies and overflow, thus decreasing the content of nuclear DNA. Apoptotic rate can be calculated by counting the cell number of nuclear DNA. However, this detection may lead to a part of cells in early stage of apoptosis missed [16]. Nuclear DNA fragmentation often occurs in late apoptosis [17]. In the early stage of apoptosis, nuclear DNA fragmentation had not yet occurred, but the cell membrane had changed obviously. In other words, phosphatidyl serine (PS) originally existed in the inner surface of cell membrane exposed to the outside of the membrane surface [18]. Annexin V can quickly bind PS on the outer surface of membrane in the environment with calcium ions, so as to sensitively detect early apoptotic cells. Therefore, the Annexin V-PI double labeling detection used herein is more sensitive and accurate [19].

In summary, this study has verified, for the first time, that lentinan has a significant effect on inhibiting the growth of glioma cells cultured in vitro, which is correlated with the induction of apoptosis and cell cycle arrest, providing clues and evidence for the development of these drugs in the future. At present, apoptosis pathways and the molecular mechanisms of cell cycle arrest have been relatively clear and definite. For example, Cyclin D, CDK4 and CDK6 play a key role in regulating the G0/G1 phase, and Cyclin E and CDK2 have a regulatory effect on late G1 cells entering the S phase [20,21]. In-depth studies are still needed in the future to explore the mechanism of action of lentinan on these molecules. 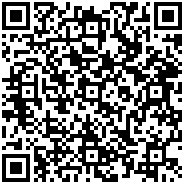